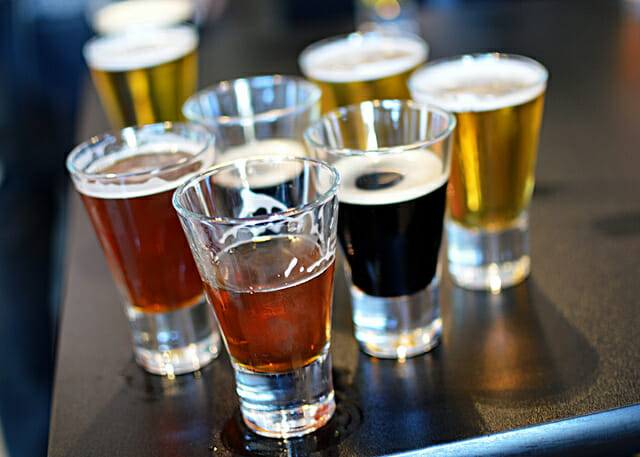 The legislative session is now halfway through, and lawmakers are sprinting this week as they try to meet a major deadline. By Friday, bills must pass out of the first committee they were in or else they die (with some exceptions).

Here are some highlights from Monday’s jam-packed agenda:

Lawmakers are considering a bill to limit the spread of brew pubs — where beer is brewed and sold at a single site that usually has a restaurant.

Existing law limits brew pubs to producing 15,000 barrels of beer each year in all the locations they own in a single county. Democratic Assemblywoman Irene Bustamante Adams’ AB431 would raise the cap to 20,000 barrels each year, but limit the number of brew pubs owned by a single person to two in the entire state.

It also prevents brew pubs from selling more than 2,000 barrels of “to-go” liquor each year. The remainder would go to distributors, who sell it to other retail outlets.

Craft brewers see the measure as an attempt by big beer companies to stifle competition or divert more liquor through their businesses. Bill backers argue the rule will prevent large companies from coming into the craft brewing industry, buying up multiple shops and dominating the once-local industry.

Watch the hearing around 1 p.m. in the Assembly Commerce and Labor Committee.

A program that helps borrowers negotiate with their lenders to try and save their home is set to expire, but SB490 would keep it alive. The bill, backed by the Senate Judiciary Committee, moves the program out from the jurisdiction of the Nevada Supreme Court and hands it to the Department of Business and Industry’s Housing Division.

It also removes a prospective expiration date of June 30, 2017.

Lawmakers last session opted to phase out the program, saying it was bringing diminishing returns now that the state has recovered from the depths of the housing crisis.

Watch the hearing at 1 p.m. in the Senate Judiciary Committee.

Making it easier for drug offenders to get welfare

People convicted of felony drug offenses would have an easier time getting food stamps and welfare benefits if lawmakers pass AB427.

Existing law requires people who have a record of using or distributing a controlled substance to  go through a drug treatment program and then prove that they’re clean before they’re eligible for welfare. A woman can also get the benefits if a doctor certifies that she’s pregnant and needs the public assistance for the health and safety of her and her unborn child.

The bill, backed by the Assembly Health and Human Services Committee, removes the requirement that drug offenders complete a treatment program before they get public assistance, but still requires proof that the beneficiary isn’t currently using or dealing the drug.

Watch the hearing at about 1 p.m. in the Assembly Health and Human Services Committee.

Student performance would no longer be a factor in teacher evaluations under proposals backed by Democratic lawmakers.

AB212, backed by Democratic Assemblyman Ozzie Fumo, prevents the state from using student achievement data when evaluating teachers. AB320, backed by Democratic Assemblyman Jason Frierson, takes a more moderate approach, specifying that student achievement data is an optional part of an evaluation but shouldn’t account for more than 20 percent of a teacher’s rating if it is included.

Another bill, Democratic Assemblywoman Brittney Miller’s AB312, would give teachers the highest possible marks in certain parts of their evaluation if their class size exceeds state-mandated ratios.

The legislation would roll back an effort from the 2011 session to rate teachers on their effectiveness and dismiss those that were underperforming. That initiative has drawn backlash from groups like the Nevada State Education Association teachers union, which says teachers are being judged on test performance that is out of their control.

Existing law specifies that by next school year, 40 percent of a teacher’s evaluation is based on student achievement data.

Watch the hearing at 3:15 p.m. in the Assembly Education Committee.