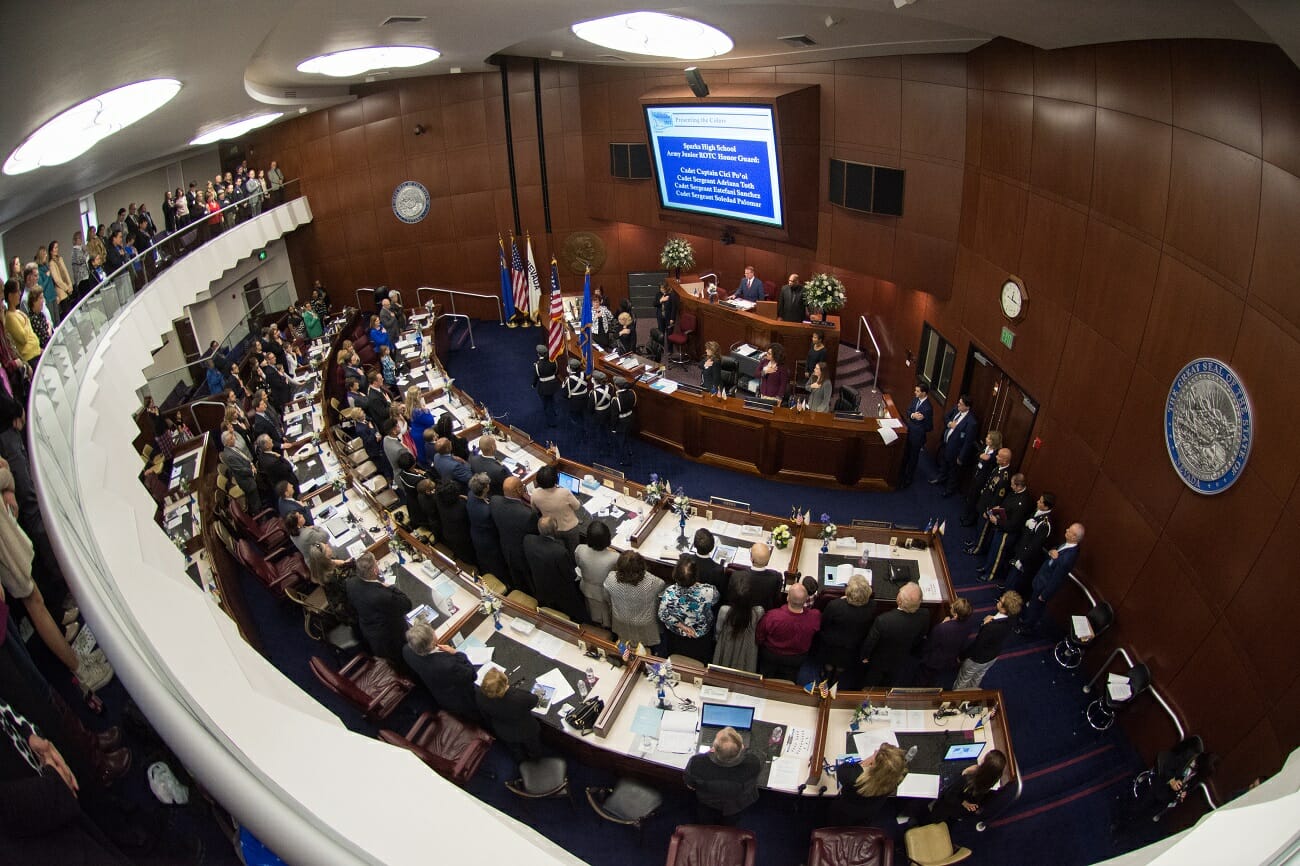 After a lengthy day and long night filled with bill introductions, Nevada lawmakers are back at it again on Tuesday with hearings on taxing vaping products and electing the president by popular vote.

Here are some highlights on the agenda:

Electing the president by popular vote

Nevada lawmakers are considering pledging the state’s electoral votes to the winner of the national popular vote under AB274, just a few months after Hillary Clinton lost the former but won the latter. The bill, backed by 16 Democratic lawmakers, would enter Nevada into the National Popular Vote Compact that already includes 11 other states that  represent 165 electoral votes.

States that enter into the contract would be able to back out of it several months ahead of an election, and the contract would only take effect once states with at least 270 electoral votes — the same number needed to win the presidency — sign up. Promoters with the group National Vote Project says it would revamp campaign strategies and give voters outside of battleground states a reason to participate in elections.

Opponents of the measure, typically Republicans, say the contract could force a state to cast its electoral votes for a candidate who lost the state but won the national popular vote and would lessen the influence of smaller rural states.

The framers of the Constitution shared a similar debate during the drafting of the document, choosing the electoral college system over a direct popular vote due to fears that it would favor candidates from larger states.

Despite the blue wave of 2016 in the state, Nevada would be the first swing state to enter the compact, which is mostly made up of Democratic states like New York and California.

Lawmakers are pushing a proposal asking the U.S. Senate to choose a Supreme Court justice who doesn’t want to ban abortion. Eight legislative Democrats are backing AJR8, which notes that Nevada passed laws expressing that the state is “committed to protecting a woman’s right to choose.”

President Donald Trump has nominated Judge Neil Gorsuch for a vacant high court seat, and conservatives believe he’ll take an anti-abortion stance based on his writings about assisted suicide.

The resolution already had a hearing last week, and the Assembly Legislative Operations and Elections Committee is expected to vote on the measure at a 1:30 p.m. meeting.

Sen. David Parks is the main sponsor of SB225, which would expand several of the anti-bullying provisions — including the creation of school safety teams and reporting requirements — to private and charter schools. It would also require anti-bullying training material to include material related to “diverse gender identity or expressions.”

Watch the hearing at 3:30 p.m. in the Senate Education Committee.

While electronic nicotine cigarettes and other vaping materials currently aren’t taxed as normal tobacco products in Nevada, one lawmaker wants to change that.

Assemblywoman Irene Bustamante Adams is the main sponsor of AB269, which would impose a 5 cent tax per fluid milliliter of vaping liquid sold in the state. It would also classify vaping products under the existing regulations for “other tobacco products,” meaning sellers would be subject to the same rules that apply to retail or wholesale tobacco sellers and would need to obtain a license. Anti-tax advocate Grover Norquist has already tweeted his opposition to the bill.

Watch the hearing at 4 p.m. in the Assembly Taxation Committee.