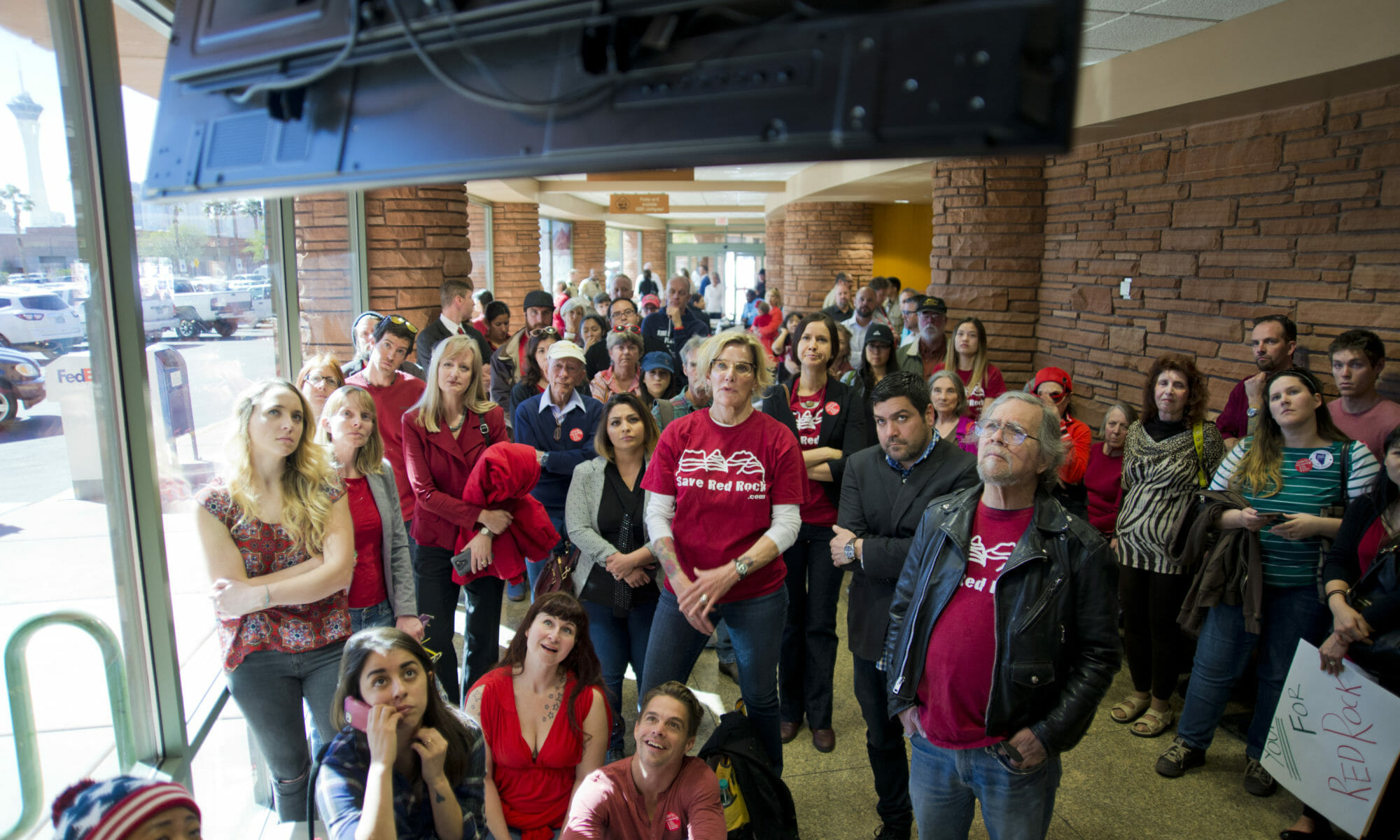 Imagine you live in a town where a developer wants to build on 2,000 acres where zoning allows 1,000 homes -- one home for every two acres.

But the developer, through lawsuits and a settlement, is muscling local government to radically bend the zoning guidelines and allow not twice or three times the number of residential units under code but five times the number that is permissible.

In many places, local government would fight back.

It shouldn't be complicated.

On Feb. 22, the commissioners voted, 5-2, to allow the developer to withdraw a new plan and to keep alive a 2011 proposal by Jim Rhodes and Gypsum Resources to build as many as 5,025 homes on 2,010 acres at a mining site atop Blue Diamond Hill outside the Red Rock Canyon National Conservation Area. (Technically, the 2,010 acres is two parcels attached at a corner) in the canyon corridor .

The large number of proposed housing units for that site (even if it's officially outside the federal Red Rock conservation area) in a canyon considered the region’s natural corridor jewel is laughable and obscene. It motivated more than 100 speakers to literally plea with county commissioners at the marathon judge-ordered hearing to reject the proposal last week. The speakers represented a rainbow of locals and canyon lovers, ranging from scientists and world-class rock climbers to photographers and one fella who read a poem. Petitions with nearly 50,000 names were submitted.

To understand how deep emotions cut, you have to understand that the entire Red Rock Canyon corridor, which runs in the shape of a “C” from outside of Summerlin to State Road 160, is considered sacred natural beauty for the more than 2 million residents in the Las Vegas valley. It’s a stunning multi-toned, evocative rock landscape amazingly close to the valley’s urban sprawl that spills out literally to the canyon’s doorstep. The feds, namely the Bureau of Land Management, oversee a big chunk of the canyon, including the popular scenic drive off State Road 159.

Rhodes’ site may not be pristine canyon land, but 5,000 homes on the site would have profound consequences for the experiences of millions of people who relish visiting the neighboring land and trails. It’s a mining site across from the cluster of houses in the Blue Diamond community that the BLM have not considered buying to add to its canyon land inventory.

The land is way too close to the hundreds of miles of hiking trails and mountain bike routes and vast stretches of mesmerizing scenery. It would appear that it would serve as a natural buffer to the federal Red Rock land.

After the last of the 130 speakers ended the seven-hour comment session last week, the county commissioners voted to allow Rhodes to withdraw his 2016 proposal and keep the 2011 plan still in play. (There’s even disagreement over whether the 2011 plan is still alive or expired. Save Red Rock, the nonprofit group that is fighting Rhodes’ plan, insists the 2011 plan expired.)

Typically, after residents spill passionate testimony for hours, members of the local governing board will offer comments and explain their vote.

Not in this case.

The county commissioners hardly even discussed the matter or addressed the points raised during the public comments.

In fact, opponents allege it appeared as if Commissioner Susan Brager, a real estate agent whose district includes the proposal, had discussed the commission action with a Rhodes representative, powerful Las Vegas lawyer Jay Brown, beforehand.

When asked at the meeting whether the applicant would like to withdraw the 2016 plan, Brown didn’t miss a beat and said, yes, without hesitation or discussion.

“Jay Brown answered so fast, ‘OK, yes, we’ll withdraw.’ Somebody had to have a conversation,” Commissioner Chris Giunchigliani told The Indy Tuesday. “This is political shenanigans.”

Justin Jones, Save Red Rock’s lawyer, put it this way about the commission vote, “It was absolutely orchestrated.”

On Wednesday, The Indy spoke with Brager, who vehemently denied she pre-arranged the deal with Brown to pull the 2016 plan off the table. Brager said Brown responded so quickly after she suggested the 2016 plan be withdrawn because he's a veteran land lawyer who has been through that drill before.

As for not responding to the residents' comments, Brager said she will have plenty to say at future meetings. Brager noted her position on the application is influenced by advice of district attorneys working on this case with the county who advised the commissioners the county would likely lose in court if the commission rejects the Rhodes proposal. And she said that just because she's a real estate agent doesn't mean she's automatically in favor of the housing development. "I'm 70 years old. I don't have to sell more houses."

Commission Chairman Steve Sisolak also didn’t have much to say about people’s comments at the commission meeting, but he went into full damage control mode in the days that followed and posted this on his Facebook page: “The commission did not approve one home, one street light, one store, one road going into Blue Diamond Hill or Red Rock for that matter.”

To further agitate the masses, Sisolak went on KNPR Friday and appeared to say that the commission took its action because it didn’t want to draw a lawsuit, saying Rhodes’ lawyer might sue or a judge could award the developer even higher residential density at the site.

But shaping public policy based on fears of possible litigation and hypotheticals is no the way you run a county.

Giunchigliani theorized that Brager voted to withdraw the 2016 plan and keep the 2011 plan going because she is scared that she will be named in a lawsuit.

“Susan thought we’re going to be sued. Anyone will sue anyone these days,” Giunchigliani said.

Local residents who love that canyon were furious that the commissioners didn’t have the backbone to stand up for them.

Local climber Stephanie Forte, who owns a PR firm in Las Vegas, spoke for many when she said on Facebook that the commission took action on the Red Rock topic listed on the meeting agenda. The commissioners had pulled the rug out from under the Red Rock Canyon supporters by switching gears to the 2011 plan and allowing the 2016 plan to be withdrawn..

“That's not the vote that was on the agenda. That's not why we spent eight hours at the county building today testifying on the 2016 concept plan. What happened is that five of our elected officials who signed up for the job of making tough choices and to be the voice of the people opted to take the easy way out,” Forte wrote.

“Beyond disappointed that my county commissioner Susan Brager voted with developers, against preserving Red Rock. Expected more from you,” Grey wrote.

“It is absurd to say that the development will not diminish Red Rock. 5000 homes and as many if not more cars, plus the light pollution. The low density housing was bad enough, but the expansion to 5000 homes is a travesty,” Antonuccio wrote. “I wonder why the County Commission approved this. Is nothing sacred? Answer: no.”

With a project generating so much rancor and volatility, any decision the county commissioners render will likely spur a lawsuit from either the developer or the opponents.

So what's a commissioner to do? The BLM doesn't appear to be interested in buying the land or swapping property.

Here's a thought: How about standing up for residents and fight 5,000 homes in a canyon everyone agrees is the region's most prized natural jewel?

Alan Snel, who has biked the Red Rock loop many times,  worked at the Las Vegas Review-Journal from November 2012 to February 2016 . He now lives in Vero Beach, FL.