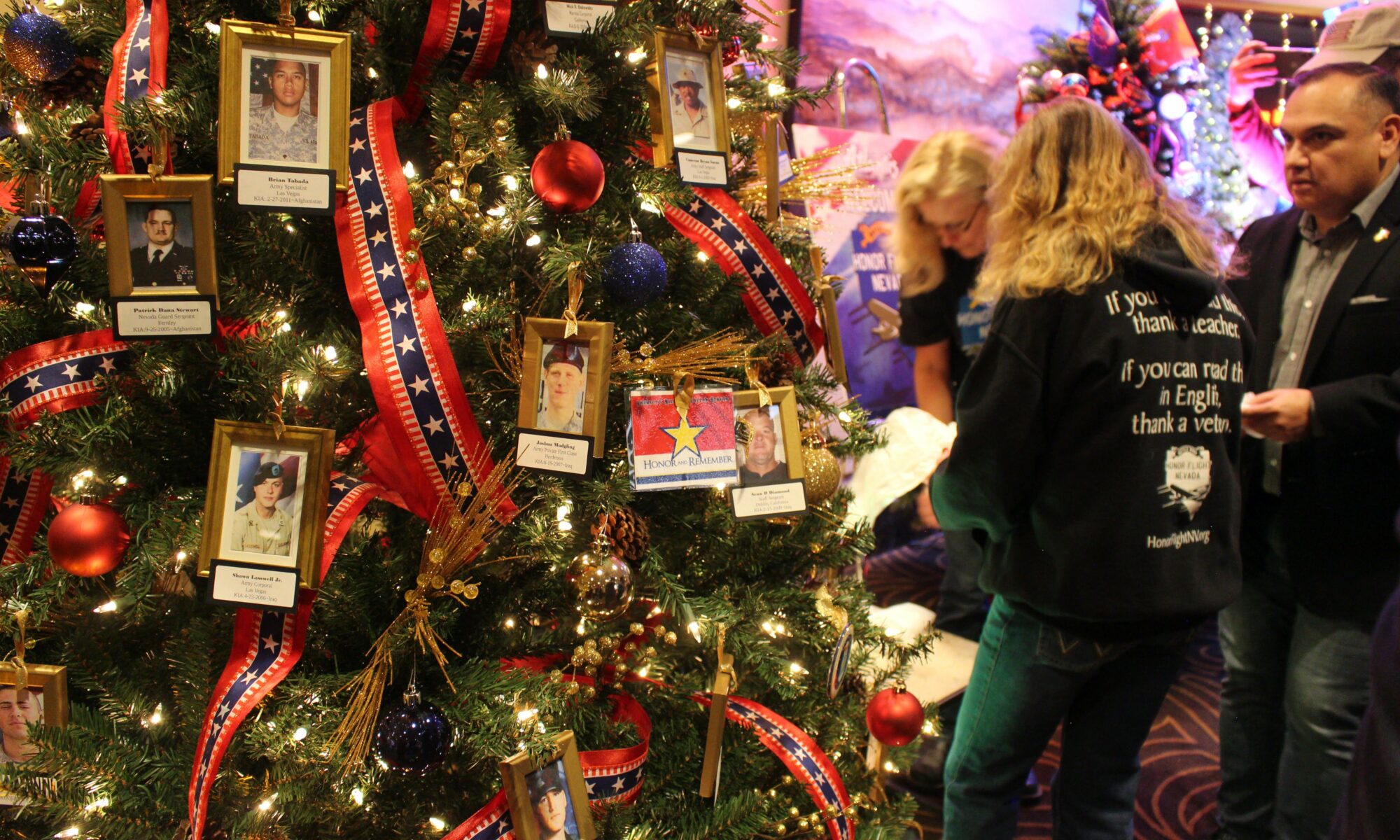 This holiday season, a special gift for the local families of fallen soldiers sits inside the busy Atlantis Casino Resort. Away from the noise and lights of the slot machines and blackjack tables, a Christmas tree is adorned with lights, ornaments and photos of their sons and daughters whose lives were lost while serving in the U.S. military.

While the holidays can be a painful reminder of the loved ones they’ve lost, this Christmas tree gives the families of fallen soldiers, known as “Gold Star” families, a tangible way to remember and honor their sons and daughters.

“We haven’t had a Christmas tree since my son was killed,” Gold Star Mother Sharon Zaehringer said through tears. “Last year was the first year we had a tree and it was here at the Atlantis. So I will come down here and sit and look at the pictures and honor our children that are on the tree.”

Zaehringer is a Gold Star Mother who attended the Christmas tree lighting and whose son’s photo is placed among the others on the tree. Marine Sgt. Frank Zaehringer died in October of 2010, at age 23, while serving in Afghanistan.

Frank Zaehringer graduated from Wooster High School in 2005 and joined the Marine Corps in 2007.

The parents of fallen soldiers are known as “Gold Star parents,” a term that goes back to World War I families who placed blue stars in their windows for every immediate family member serving in the armed forces. If their family members died while serving, the family would replace their blue star with a gold star.

Honor Flight Nevada, a non-profit organization that flies local veterans out to see their memorials, started this memorial last year in December of 2018.

CEO and founder of Honor Flight Nevada Jon Yuspa wrote in an email to The Nevada Independent that he had the idea to help fallen soldiers’ families create new positive memories for the holidays.

“We have seen and heard so many stories with a lot of healing around the tree,” Yuspa wrote. “The families have been spending time around the trees as if its their [own] living room.”

Steven Ward is also a Gold Star parent whose son, Marine Lance Corporal Eric Ward, died in February of 2010 while also serving in Afghanistan. He was 19 and grew up in Redmond, Washington.

“He loved Christmas,” said Ward. “Every year we keep a seat empty for him.”

Eric Ward was a fifth-generation Marine, preceded by his father and mother, grandparents, and generations before him.

Ward admits this time of year can be emotional and difficult.

“But you have to learn to process and go forward,” he said. “You honor them. I know the loss will never be painless, but I go forward and in exchange I honor him by doing extra events like Honor Flight and the Christmas trees and barbecues for other Gold Star parents.”

There are three Christmas trees on display at the Atlantis. One is for remembering fallen soldiers such as Frank and Eric, one is for living veterans and the last one is for active duty personnel.

Since the trees were put up in late November and early December, a few holiday cards have been left at the foot of the trees by strangers, thanking the people the trees represent for their service and sacrifice.

The three trees were put up by Dawn Forbus, who sits on the board of Honor Flight Nevada. Forbus said she volunteered to help put the trees up because she feels connected to the Gold Star families and wanted to honor them and the sacrifices made by their loved ones.

She said the event brings mixed emotions and the Christmas tree has become much more than just a tree for the families remembering their sons and daughters.

“It's just helped to give those Gold Star family members the realization that they're not alone, that their loved one is not forgotten,” Forbus said.