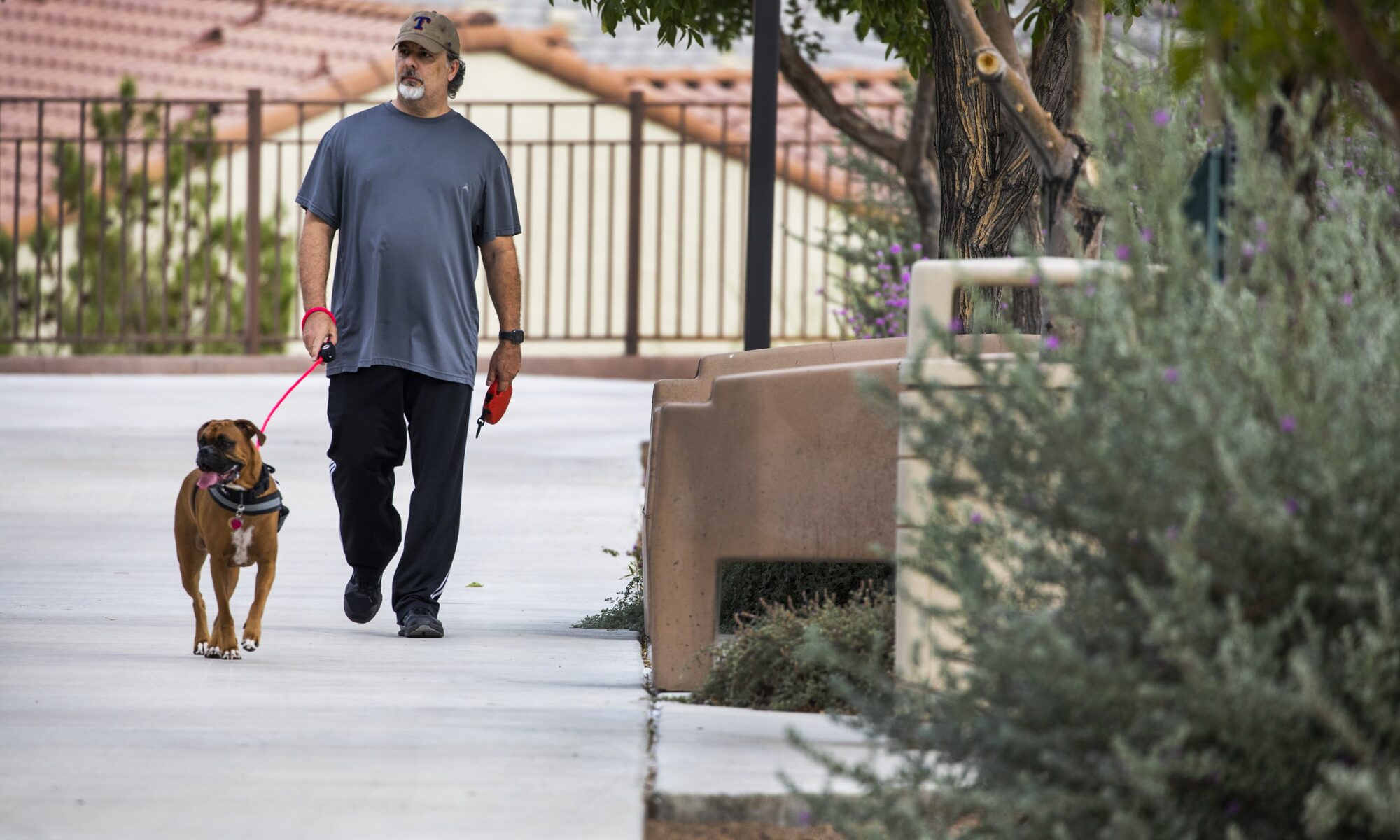 Neil Mayfield’s dog — a 2-year-old boxer named Penny — has their two-mile walking route near Madeira Canyon Park in Henderson memorized. It’s their morning ritual these days, before or after he walks the family’s other dog.

The daily fresh air wasn’t always a given for her owner. Mayfield, 51, spent two decades working in the food and beverage industry, logging long hours in often windowless environments. His days were robotic: a demanding shift, a drive home, limited time with his wife and children, household chores and a few hours of sleep before doing it all over again.

Then the pandemic hit. The former assistant food and beverage director was one of thousands sidelined by the 78-day shutdown of the Las Vegas Strip. His furlough ended when casinos reopened in June 2020, but employment only lasted a few months. By October, Mayfield’s gaming company employer, which he did not want to name, consolidated operations and laid him off. He was suddenly back home, shepherding his young sons, now 7 and 11, through distance learning rather than battling with tourists to keep their face masks on, navigating staffing shortages or worrying about catching COVID-19.

“When they let me go, I was like, ‘thank goodness,’” he said. “We all had like a foxhole mentality when we went into work.”

Mayfield said the unplanned time off work, as unnatural as it felt initially, gave him time to reassess his life priorities. Now, his involuntary departure from the workforce has morphed into a personal decision not to return — at least for the time being.

He’s not alone. Despite federal unemployment benefits expiring in early September and higher wages in some industries, workers aren’t necessarily flocking back to the job market.

Nevada’s labor participation rate — a metric that refers to people who are working or actively looking for jobs — has fallen several percentage points since the beginning of the pandemic. In September, the seasonally adjusted rate stood at 61.6 percent, down from 64.9 percent in February 2020, according to the U.S. Bureau of Labor Statistics. The state’s chief economist, David Schmidt, said the pandemic has created some “unusual volatility” in month-to-month data, but even if numbers are revised after benchmarking, he expects the broad trend to be lower labor participation.

Nationally, the labor participation rate remained relatively static in September at 61.6 percent, though that’s 1.7 percentage points lower than in February 2020.

The labor force participation rate is having an effect on the state unemployment rate, which measures people who are out of a job but actively seeking work. The Department of Employment, Training and Rehabilitation (DETR) reported Thursday that Nevada’s unemployment rate had dipped slightly, from 7.7 percent in August to 7.5 percent in September, which Schmidt said in a news release was “due in part to the people leaving the labor force, an occurrence typically seen when coming out of a recession.”

So why are people permanently leaving or postponing their return to the workforce? Economists and others who study labor trends say it’s likely a mixed bag of reasons, ranging from early retirement or career burnout to child care concerns and lifestyle changes. For others, it’s an inability to work certain jobs as the pandemic, and related mitigation efforts, continue.

While not entirely surprising, they say, it’s also a landmark moment in labor.

“It’ll be a big, you know, asterisk in history books for labor force adjustment,” said Brian Bonnenfant, a project manager at UNR’s Center for Regional Studies.

In June, Mayfield and his wife, a special education coordinator for the Clark County School District, began broaching the big question: Should he return to work?

It was increasingly clear that their sons would be attending in-person school full time in the fall, rendering his duty as distance learning coach unnecessary. But the preceding eight months had given the family a window into what their life could be: no more frenzied schedules, missed holidays or prolonged exhaustion. Mayfield cooked more meals, walked their two dogs and did the laundry, giving his wife time to decompress after work. They watched their family relationships blossom, not to mention their health.

“I got regular sleep again, and I stopped feeling like I had been beaten with a baseball bat every morning,” he said.

The couple took a hard look at their finances, talked to their children and discussed lifestyle changes that could trim expenses. Mayfield didn’t oppose going back to work. His phone already had been ringing with job prospects in the food and beverage industry. His wife and children, including a college-aged daughter, didn’t want him returning, though.

So he hasn’t, at least for now.

Would they have made this change had the pandemic not upended his work life? Probably not, Mayfield says.

“I think it forced people to reevaluate things,” he said. “I think people reconnected, not only with family members but with themselves. There really was not a lot to do besides some serious introspection.”

Nikki Tarbell and her family came to a similar decision..

For 16 years, Tarbell worked as a master control operator for the City of Las Vegas’s government-access television channel. The city’s four-day work week meant she typically left her Henderson home at 7 a.m., not to return until roughly 6:30 p.m., leaving her husband responsible for feeding their two children and shuffling them to and from day care. That grind came to a halt when COVID-19 emerged and Tarbell was allowed to work from home.

But the city ended its remote-work policy in mid-March. The decision upset Tarbell, who didn’t want her unvaccinated children, then in kindergarten and third grade, back in day care and exposed to the virus. At the time, schools were just resuming some in-person learning. She and her husband had determined that they only felt comfortable allowing their son and daughter to attend classes in person, while wearing masks, if they came straight home after school

Like Mayfield and his wife, Tarbell and her husband, a data analyst for Boyd Gaming, sat down to pencil out the finances. They created a budget, examining where they could save money and exist as a one-income household. For instance, Tarbell said they realized they could do without landscapers if she had more time to take care of those tasks, and they would also save $25,000 without child care.

She submitted her resignation letter to the city, noting she had “never missed a beat or dropped a ball” while working remotely.

“Every family is different,” she wrote. “There is not a ‘one size fits all’ solution out there for childcare in the middle of a pandemic and where the schools are still not fully opened.”

The decision felt jarring at first, Tarbell said, in part because she had always felt the need to be financially independent. She watched her own mother struggle after her parents divorced when she was 12. But a realization was slowly dawning on her: She was no longer stressed, fighting tears on weeknights after long work days, commutes and making sure their children got fed and completed their homework.

She felt more present than ever as a wife and mother.

“I am still a feminist. I am still capable. I am still smart. I still have an education,” she said. “But, also, I need to take this time in my life to reevaluate, like, what is important? I missed so much of my children’s young lives because I was working.”

During the pandemic, women have departed  the workforce at a greater rate than men, whether voluntarily or because of the caregiver roles they often play for children or other family members. An analysis by the National Women’s Law Center found that 309,000 women (aged 20 and older) left the American labor force entirely in September, marking the biggest drop in female participation since September 2020.

Anne Price, president of the Oakland-based Insight Center for Community Economic Development, said the shifting workforce landscape should serve as a wakeup call for the government and private sector.

“We’re really seeing a bird’s-eye view of what people’s work lives really look like,” she said. “I think it should give us reason to pause and say, you know, we need better policies in place. People need sick leave. They need paid leave. They want to work with dignity.”

Bonnenfant, from UNR’s Center for Regional Studies, said he expects those who have left the workforce to return eventually, perhaps after reimagining their work possibilities.

That’s the direction Mayfield is considering. He has long dreamed of opening a “cozy lounge,” featuring jazz music and sophisticated drinks, ideal for a date night. But he is in no hurry.

The longtime food and beverage worker wants to see how the market shakes out before making any big investments. For now, he’s savoring his morning walks with the dogs, relaxing evenings with his family and the ability to play handyman around the house — all activities once nearly impossible because of his work schedule.

Tarbell, meanwhile, isn’t sure what the future holds. Maybe graduate school. Maybe trade school. But like Mayfield, she, too, is content feeling untethered.

“I was working in television for 20 years, where you work in a dark room staring at monitors,” she said. “I have been outside every day, clipping trees and replanting things and painting things and working with my hands and sweating — and it has been awesome. I needed that life change.”

Mayfield and Tarbell also say they feel grateful and fortunate. Not everyone can leave the work world behind for a time.

The COVID-19 economic recovery has been K-shaped, Bonnenfant said, meaning some business sectors and populations have recovered more quickly, while others are suffering. For those on the downward slope of the K, it may be impossible to leave a job or stay out of the workforce for a prolonged period.

“There's a lot of households and individuals that can't afford to play the labor market game or sit out for a while and take care of their mental health and their families, themselves,” he said.

Hunter Birkeland is among those who left the workforce but can’t afford to remain jobless for long.

The UNR student moved from Las Vegas to Reno in August to resume in-person classes. She hoped to find part-time employment up north, but Birkeland is legally deaf and needs a job that doesn’t involve heavy interaction with customers or other people. The mask mandate has stripped her ability to read lips, making it difficult to communicate.

Prior to moving, she worked at a grocery store and a distribution center in Las Vegas. The former proved to be a daily hassle, even after the store moved her to a back-of-house position cutting fruits and vegetables.

“Whenever I did go out to put stuff out, I would have customers get mad at me because I didn’t understand what they were saying,” she said.

Birkeland’s attempt to find a new job that accommodates her disability hasn’t panned out, leaving her scraping by with $15 to $20 in her bank account. Birkeland said she has applied for more than a dozen jobs and sought help through both a state agency and the on-campus Disability Resource Center. Although she has picked up gig-economy jobs, such as delivering food for DoorDash, she wants a stable paycheck.

The 20-year-old said she checks her bank account at least twice a day, fearful that hidden fees or mistaken subscriptions will drain her last few dollars.

“I can't do anything, and I don't have a credit card because of my student loans,” she said.

Schimdt, the state’s chief economist, said one of the challenges moving forward is making sure people like Birkeland — who want to re-enter the workforce — can find an avenue to do so. It may be a matter of retraining or other solutions, he said, that ensure “if someone wants to work, there’s an opportunity out there for them.”

Birkeland hopes she found that opportunity. She interviewed for a clerical filing position through the university’s veterinarian department on Wednesday.