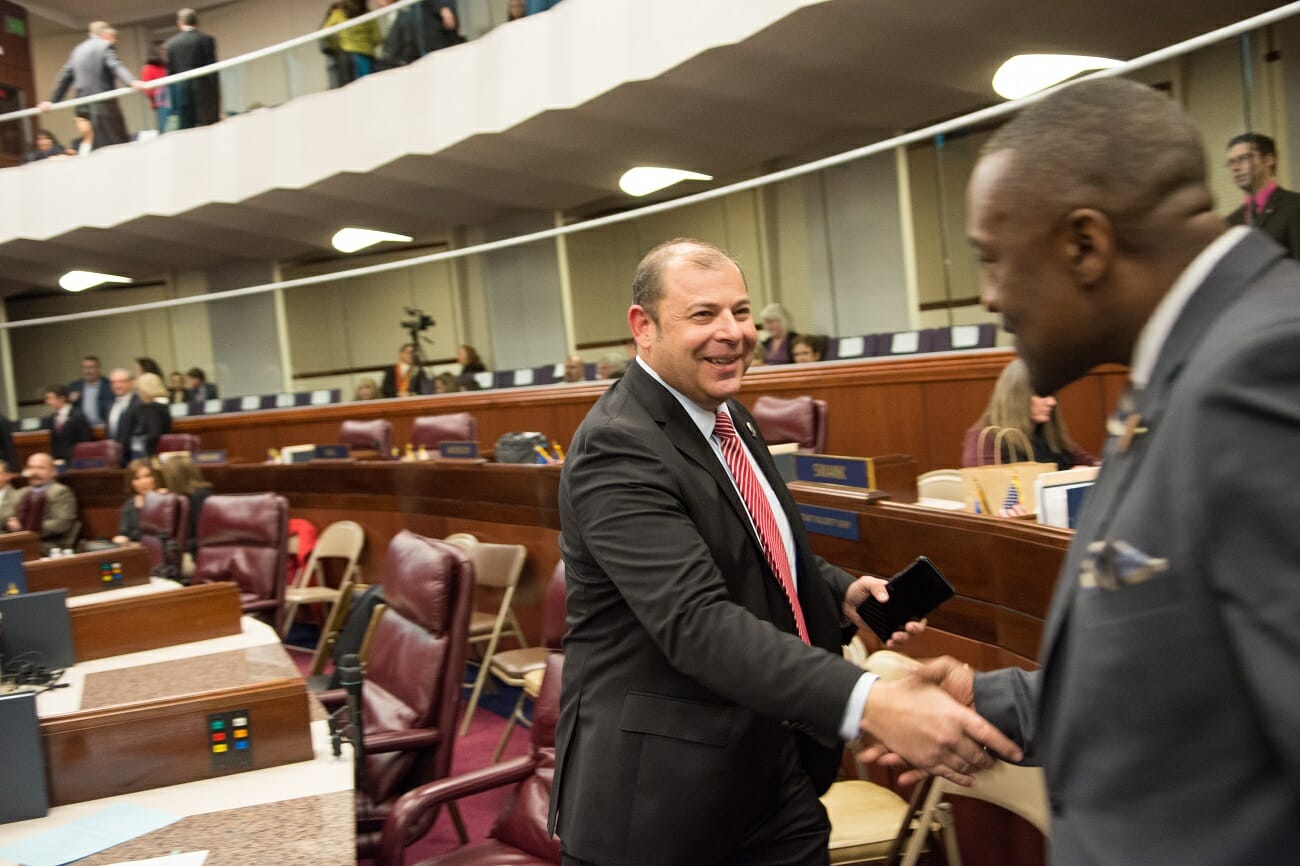 By Michelle Rindels and Riley Snyder

After just one session in the majority, Assembly Republican Leader Paul Anderson is getting used to life with ten fewer caucus members and less say in the legislative process.

But Anderson and Republicans aren’t planning to spend the session wallowing in their powerlessness - they’re planning a press conference later this week to announce their priority bills and how they plan to defend policies passed last session.

During a Tuesday interview with reporters, Anderson offered a glimpse of how Republicans will navigate the session in the minority and his thoughts on a controversial school choice program and the prospect of an Obamacare repeal.

Anderson said some of the caucus’ priorities could garner support from Democrats but they’ll have to work to get buy-in. He cited Assemblyman Keith Pickard’s proposals on family law and guardianship and Jill Tolles and John Hambrick’s work on children’s issues.

“They’re pretty nonpartisan issues that will be some of our priorities but we’ll certainly, from a minority perspective, have to work towards -- get the hearings and get them across the aisle,” he said.

They hope to expand the Workforce Innovations for a New Nevada office that they created during the Faraday Future special session in 2015, and Anderson said his caucus would support other policies outlined by Sandoval in his State of the State address such as community college funding for advanced manufacturing programs.

Anderson also remained noncommittal on a proposal to automatically register voters at the DMV. He pointed out its success in Oregon, where hundreds of thousands of people were registered in the first year of the program.

“That’s not a bad thing at all,” he said, but noted lawmakers hadn’t yet discussed potential consequences of the measure.

He also said he was personally opposed to a measure brought by fellow Republican Assemblyman Jim Wheeler to lower the gambling age.

He said other Republican legislative accomplishments under threat by Democrats, like the Achievement School District, needed more time to work and suggested that the programs could be improved by statute.

But he said prospects were dim for other proposals that got traction last session in the heavily Republican Assembly, such as voter ID and campus carry.

“I’m not sure ‘bills up our sleeves’ would work this session,” he said. “Unless there’s a demand on both sides of the aisle to pursue those things, the rest of it is just rhetoric.”

No ESA, No Budget

Anderson said he wasn’t sure if his caucus would follow in the footsteps of Senate Republicans, who declared en masse last month that they would oppose any budget that didn’t include funding for the state’s controversial Education Savings Account program.

Gov. Brian Sandoval included $60 million in funding for the program, a political hot potato that would give parents more than $5,000 a year in state funds to put toward their child’s education-related expenses such as private schooling or tutoring.

Anderson questioned the logic of issuing ultimatums about the program, but said his relationship with Assembly Democratic leader Jason Frierson was more collegial and said the caucus is holding a discussion Tuesday night to see if they’ll follow their Senate counterparts.

“They’ve sort of drawn lines in the sand that has put everybody in a corner, and I’m not sure if that helps people get together and have conversations about solutions,” he said. “We’ll decide as a caucus if we want to draw that line right now and where we’re going to draw it.”

“I don’t make it a habit to tell other Republicans what to do,” he said.

Like state budget officials, Anderson said he didn’t know what would happen if the federal government repeals the Affordable Care Act without a replacement plan ready to go. Sandoval’s 2012 decision to expand Medicaid has helped to dramatically reduce Nevada’s uninsured rate, but many of those newly insured people are heavily dependent on federal funding that the state couldn’t make up for on its own.

“There is no secret Plan B budget,” he said. “It would be tragic for Nevada to lose the funding for those that we just got insured.”

He said he’s spoken with Republican Sen. Dean Heller and other members of the state’s delegation about the need for an adequate replacement plan.

“They’ve expressed their opinion, they understand our position,” he said. “We expect them to represent Nevada the best they can, and I think they’re clear on what that means.