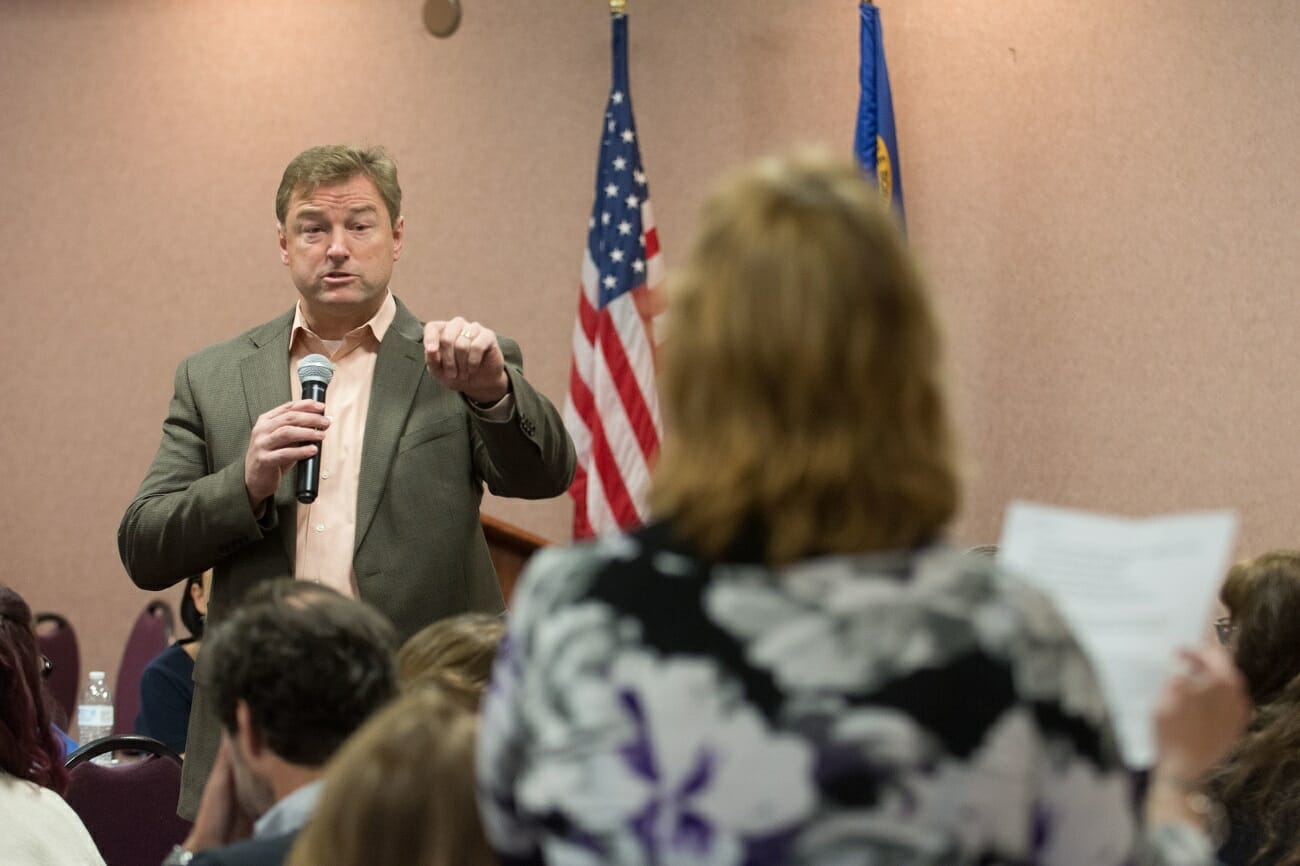 Carson City isn’t considered a hotbed of progressive politics, but even within the friendly confines of the reliably conservative state capital, Sen. Dean Heller and Rep. Mark Amodei couldn’t escape the throngs of progressives who have regularly flooded their office phone lines and protested outside their offices.

While about 200 people protested outside a normally non-controversial Carson City Chamber of Commerce business luncheon on Wednesday at the Gold Dust West casino, Heller and Amodei took increasingly heated questions from attendees questioning their support for President Donald Trump and his policies.

The 45-minute question and answer session, nominally centered around business topics, was marked by constant interruptions and disruptions from crowd members who pressed the two Republicans on repealing the Affordable Care Act, public lands and immigration reform.

Both Republicans blamed congressional leadership for inaction on issues like immigration, and said they would support policies and cabinet nominees of President Donald Trump on their merits.

Both lawmakers faced questions about the uncertain future of the Affordable Care Act, and what changes a Republican-led solution would entail.

Amodei, in a later interview, said he thought there was a broad consensus among congressional Republicans that any replacement plan would need to ensure that no one currently enrolled loses insurance, and said he hoped Republicans would take the time necessary to put together a replacement plan.

He said House lawmakers were concerned with the “fairness thing,” and making sure states that expanded Medicaid (like Nevada) didn’t see thousands lose their insurance.

“If your solution is, ‘You haven’t got insurance anymore, tough shit, go find a place to work where there is some,’ that’s probably not going to work,” he said.

He said any Republican replacement likely wasn’t a “60-day thing” and raised the possibility that the state government might need to call a special session to deal with a possible budget hole.

Amodei said that he’ll hold an actual town hall in during the April congressional recess, while Heller stressed the popularity of his telephone town halls while saying he would hold a town hall if attendees promised not to applaud or boo.

Zak Koszarek, a 27-year-old who works for Patagonia, said he was surprised that event turned abrasive and said he was planning to “fly solo” and hold a sign reading “For the record, I paid $16 to protest you two.”

He said that while he strongly disagreed with Heller’s support of Secretary of Education Betsy DeVos and new EPA head Scott Pruitt, he was surprised to learn about both candidates’ more moderate stances on immigration and hoped it boded well for the future.

“It gives me a little bit of hope that they won’t just rubber stamp what the administration wants to do,” he said. “I just hope they keep their word.”

8:16 a.m. - This story has been updated to reflect that one of Heller's quotes was referring Scott Pruitt, not Donald Trump.