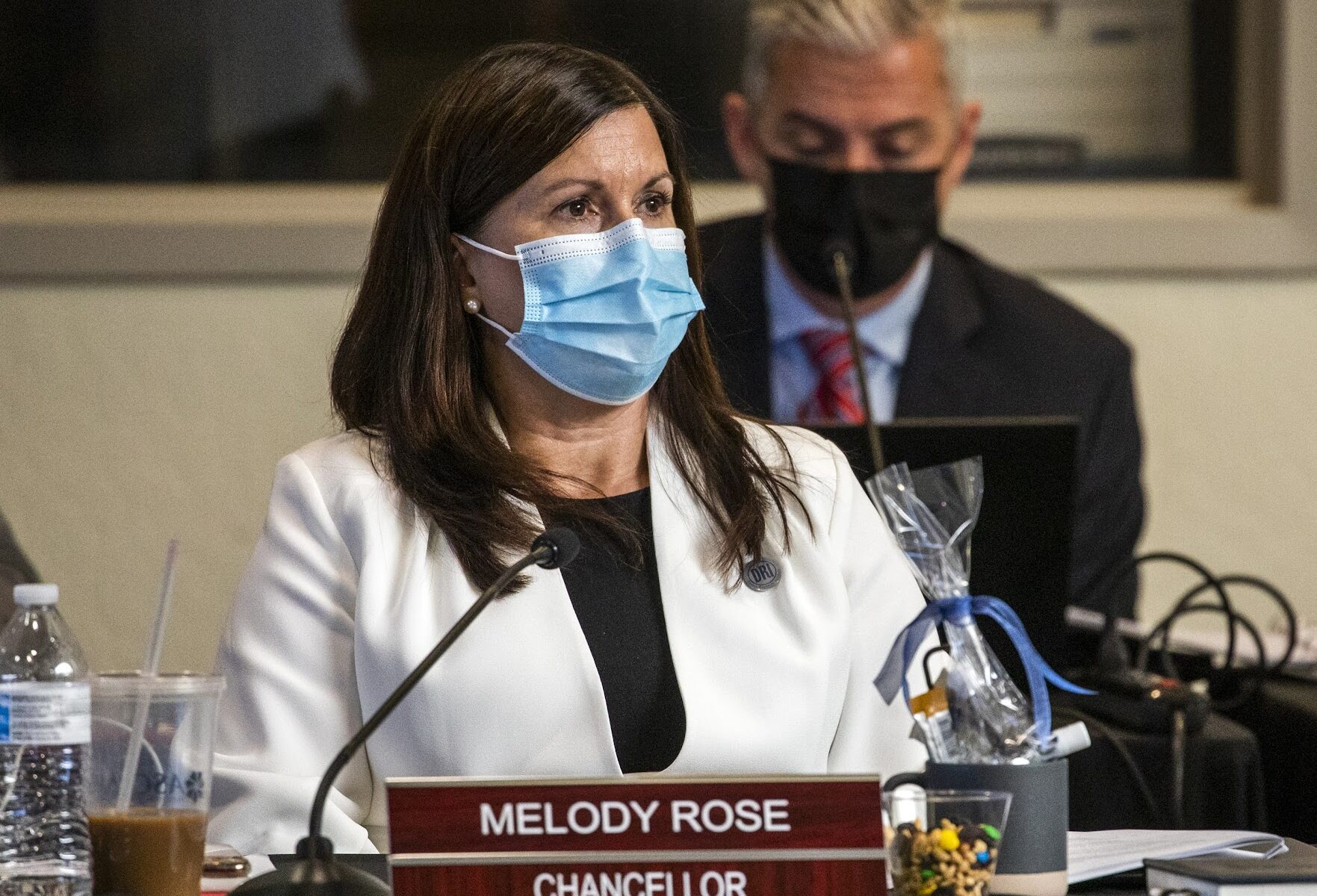 Nevada System of Higher Education Chancellor Melody Rose accused Board of Regents leaders of persistent hostility and undermining her ability to do the job in a hostile work environment complaint filed Monday, a stunning split between the system’s chief administrator and the governing board that hired her.

McAdoo and Carter — both elected to their seats on the board in 2016 — were only recently selected by regents to lead the board during a meeting in June 2021, with the pair replacing Regents Mark Doubrava and Carol Del Carlo, respectively.

Multiple sources, who requested anonymity in order to discuss details of the confidential filing, confirmed the existence of the complaint and the subjects of the document to The Nevada Independent on Monday.

Sources also said that members of the board were told that other regents, presidents of institutions, system cabinet members and staff were potential witnesses in the investigation, and that the complaint invoked the state’s whistleblower protection law, which prevents regents from retaliating against Rose.

A spokesperson for the chancellor’s office also declined to comment, adding that the system “does not comment on personnel matters.”

Sources also confirmed that NSHE General Counsel Joe Reynolds retained an outside firm, Las Vegas-based Kamer Zucker Abbott, to conduct a third-party investigation. An email inquiry sent to a lawyer for the firm, Scott Abbott, was not answered, and a voice message left with the firm’s front office was also not returned.

The NSHE Board of Regents handbook lays out general policies against sexual and workplace harassment, which details a complaint and investigatory processes to follow in cases of alleged harassment. It’s unclear how those policies may be interpreted in this case, given that regents are elected to their position.

The system last hired Kamer Zucker Abbott in the midst of a March 2018 dispute over an agreement that would have tied a $14 million philanthropic gift for the fledgling UNLV Medical School to the guaranteed employment of then-UNLV President Len Jessup through the end of 2022.

In an assessment of that agreement, the firm said at the time that the deal was “extremely troubling” and raised “serious questions” over Jessup’s ethics.

The implosion of Jessup’s tenure at UNLV came at the time as just the latest high-profile turnover. Two years prior, former system chancellor Dan Klaich resigned over his role in the alleged misleading of lawmakers over a high-profile change in college and university financing.

These incidents, among a list of others, formed the basis of a move by lawmakers and advocates beginning in 2017 to remove the Board of Regents from the state Constitution, and in effect to drastically increase the ability of legislators to regulate higher education as it would other state agencies.

That effort culminated in 2020’s Ballot Question 1, which failed by 0.3 percentage points amid complaints that the final ballot language was “too confusing” for voters. Proponents of the idea have since resurrected the plan as SJR7, a resolution that could head to ballots as soon as 2024 should lawmakers approve it for a second time in 2023.

In the years since Jessup’s departure, relative stability has emerged, especially as the system pivoted toward emergency management in the midst of crushing restrictions and limitations spurred by the pandemic that tanked revenues and sent most instruction online.

Since 2020, new permanent presidents have been installed at UNLV, UNR and Nevada State College, all in addition to the appointment of Rose last summer to replace retiring Chancellor Thom Reilly.