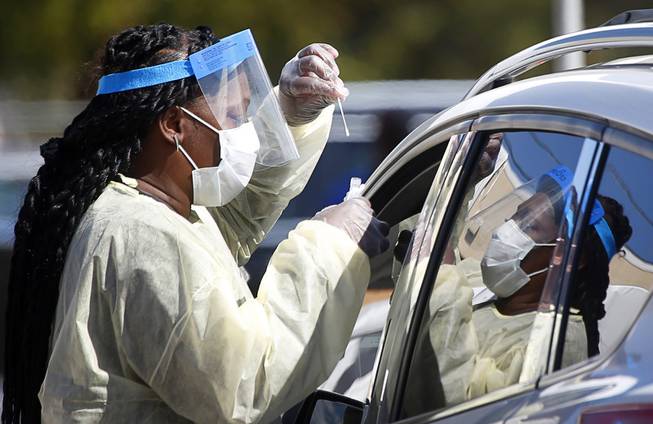 Welcome to the 14th installment of “Coronavirus Contextualized,” a recurring feature in which we explore some of the numbers swirling around in the time of coronavirus.

Through these stories, we hope to parse some of those numbers, including confirmed cases of COVID-19, people tested, number of hospitalizations and deaths, and provide some context to them. You can view the prior editions of “Coronavirus Contextualized” here on our coronavirus page.

Two weeks ago, we transitioned our “Coronavirus Contextualized” stories to Fridays after we launched a new, more robust data page. These stories now serve as a written roundup of the COVID-19 trends we kept our eyes on over the past week, with all graphs and charts living permanently on our new data page, where they are updated multiple times a day with the latest numbers.

We’re continuing to take suggestions for what kind of data, graphs and overall trends you would like to see analyzed in future versions of this story or included in a future update of our data page. Reach out to megan@thenvindy.com with any feedback.

Below, we take a look at some of the latest COVID-19 trends in Nevada on the heels of Gov. Steve Sisolak’s Thursday announcement that he is shuttering bars in the state’s two urban counties and imposing restrictions on restaurants.

At the same time, there has been a significant influx of confirmed and suspected COVID-19 patients to Nevada’s hospitals, particularly in Southern Nevada. On Wednesday, there were 935 people hospitalized statewide with confirmed or suspected COVID-19, double the 467 hospitalized two weeks earlier. Subtracting those COVID-19 hospitalizations from the total hospital census, non-COVID hospitalizations actually decreased from 4,266 two weeks ago to 4,058 on Wednesday.

Sisolak, during a Thursday press conference in which he announced the closure of bars in the state’s two urban counties and restrictions on dining, pointed to rising hospitalizations in the state as the basis for his actions.

“Across the country, we have seen far too many instances where hospital capacity appeared fine one day and then were overwhelmed the next with increased COVID-19 patients,” Sisolak said. “We do not want this to happen here, so we will do what we must to make sure that our hospitals are able to provide the best positive care to all patients.”

The state’s “Roadmap to Recovery” plan cited a “consistent and sustainable downward trajectory of COVID-19 cases and decrease in the trend of COVID-19 hospitalizations over a 14-day period” as one of the key criteria for reopening. Instead, the state has seen more than two weeks of sustained day-over-day increases in hospitalizations, except for a brief one-day decrease on Sunday.

In general, hospitalizations are considered a more reliable statistic for analyzing COVID-19 trends because they aren’t affected by day-to-day changes in how many people are being tested.

Another helpful way to look at how COVID-19 cases are trending in the state is looking at the daily test positivity rate — that is, the number of new positives that are being identified compared to how many new people are being tested each day. That rate can fluctuate day over day if more people happened to test positive and fewer people were tested, or vice versa, which is why it’s better to look at the seven-day average.

That average hit a high point on July 2, when the state’s test positivity hit a peak of 18 percent after several days of positivity rates between 12 and 30 percent. Since then, the average positivity rate has decreased to about 11.6 percent as of Thursday, still much higher than the 2 to 5 percent range it had hovered in between May 11 and June 18.

It can also be helpful to look at the overall test positivity rate, which looks at the total number of people who have tested positive for COVID-19 compared to the total people who have been tested. As of Thursday, that number was 7.6 percent and has largely been on the rise since its low point of 5.2 percent on June 17. (The cumulative test positivity rate saw a one-day decrease on Wednesday to 7.54 percent from 7.55 percent, before going back up on Thursday.)

The total number of COVID-19 cases in Nevada was 25,061 on Thursday, up more than 10,000 from two weeks before, or a 68 percent increase. An analysis of the demographic data shows that that growth is largely being fueled by young people, as has been true in states across the nation.

In the last two weeks, the number of cases among those:

Though experts note that young people are less likely to suffer complications if they contract the novel coronavirus, they have expressed the concern that there could be a second wave of infections as young people bring the virus back to their older family members.

The numbers also show racial disparities in who has tested positive for COVID-19 recently. In the last two weeks, the number of cases among those who are:

Still, the data show that people of color are disproportionately affected by the virus. Hispanic individuals make up 42 percent of all confirmed cases, compared to the 30 percent share they make up of the state’s population. Additionally, 13 percent of those who have died from COVID-19 have been Black and another 16 percent have been Asian, compared to the 9 and 10 percent shares each demographic group makes up in the population.

The data show that COVID-19 cases in Nevada continue to be increasing. Looking at the seven-day average in new cases, the state reached a high point of 790 average new confirmed cases on July 3. That number had decreased to 742 by Thursday.

Deaths in Nevada have started to creep back up over the last week and a half with 18 additional deaths reported on Thursday — 14 in Clark County and four in Washoe County — the second highest single-day total behind April 22, when 24 deaths were reported.

Deaths typically lag case spikes, since it takes some time for people to fall ill enough to perish from the illness.