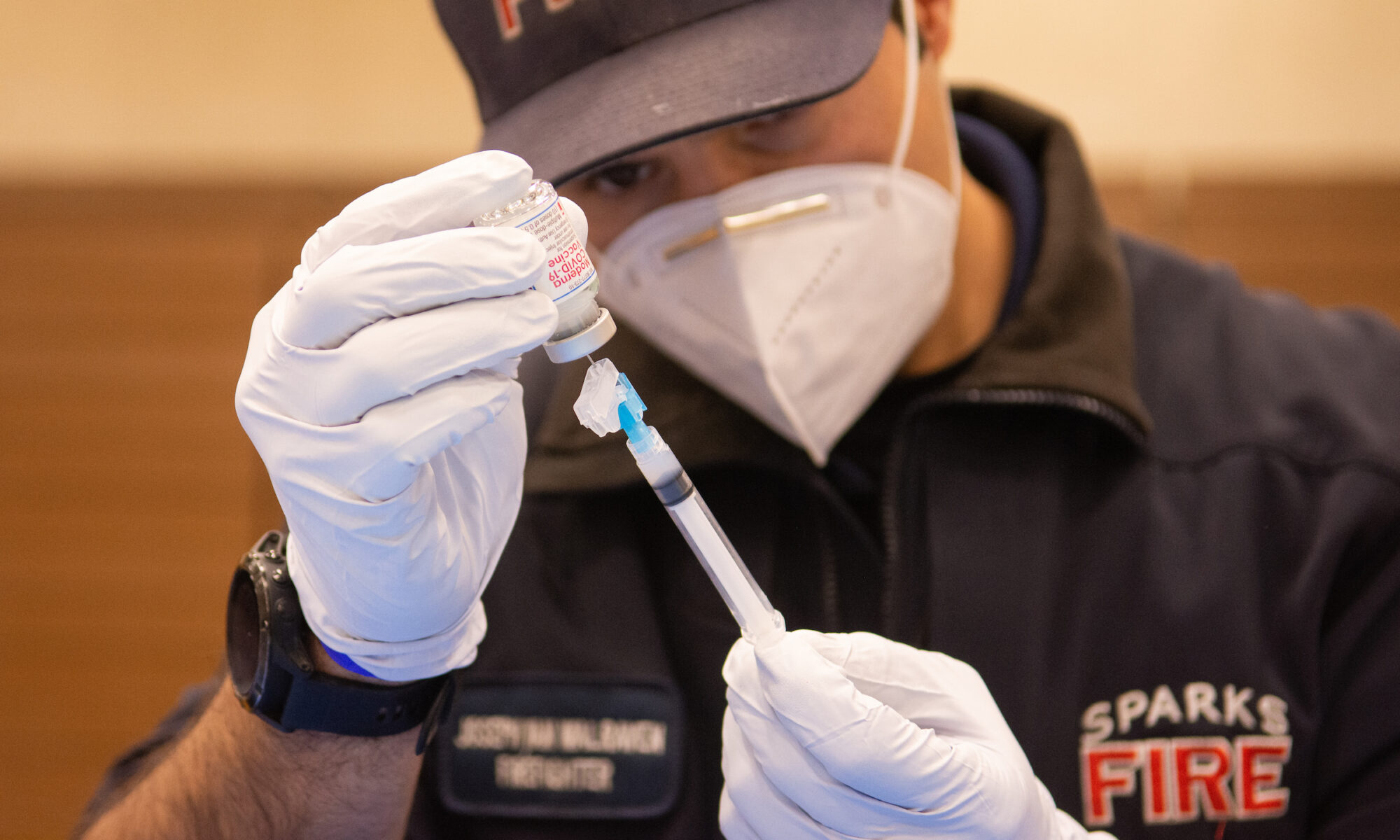 Welcome to the 47th installment of “Coronavirus Contextualized.”

For more than a year now, we have brought you the latest COVID-19 numbers in Nevada, including COVID-19 cases, hospitalizations and deaths, and provided context to them on a near-weekly basis through this series. You can view the prior editions of “Coronavirus Contextualized” here.

As noted in the last two editions, we plan to continue providing you with the data you need to know about COVID-19 in Nevada for as long as necessary. However, “Coronavirus Contextualized” now publishes on a semi-regular basis, which means we may occasionally skip a Friday or two if there are no new trends to report.

Below, we explore the slightly elevated case and hospitalization numbers as the vaccination effort continues across the state and as counties prepare to reopen further next month.

While cases continue to generally slowly increase, they appear slightly down this week from the prior week. That’s because the seven-day average was briefly inflated following a couple of days in mid-April in which hundreds of backlogged cases were reported.

As of Thursday, an average of 369 cases were reported each day over the last seven days, down from 481 a week ago. Cases, though, are still generally higher than they were at their lowest point last month, when the state hit 239 on March 23.

It’s important to note, however, that the number of new cases reported each day remains at a generally low level. At the peak of the case surge this fall, the seven-day average was 2,736, on Dec. 10. The previous low point, in mid-September, was 267.

Kyra Morgan, state biostatistician, attributed the increases to a combination of the state increasing capacity limits to 50 percent and behavior changes from the general public who might be, as she said, “letting their guard down from the low numbers.”

“It’s not necessarily unexpected or cause for alarm at this time,” Morgan said.

Since the beginning of the pandemic in March, there have been 312,306 COVID-19 cases reported statewide. A little more than 3 percent of those cases, 10,893 have been diagnosed in the last month, and 0.8 percent, or 2,583 cases, have been reported in the last week.

Since the beginning of the pandemic, 1 in 10 Nevadans has tested positive for the virus.

Nevada’s test positivity rate, which looks at the percentage of tests or people coming back positive out of the total tested, also started to see a bit of an increase this week.

It is not possible to independently calculate the test positivity rate based on test encounters because the state only reports the number of positive cases, not the number of positive test encounters. However, the state does provide this number, calculated as an average over a 14-day period with a seven-day lag. As of Wednesday, that number was 5.8 percent, up from a low point of 4.2 percent in early April.

That number has stabilized in recent days after a couple of weeks of day over day increases, though it is still above the 5 percent threshold recommended by the World Health Organization for reopening.

Since the beginning of the pandemic, more than 1.5 million people — roughly 1 in 2 Nevadans — have been tested for COVID-19, and there have been more than 3.1 million individual testing encounters.

More than a third of Nevadans are now either fully or partially vaccinated against COVID-19.

That means that 37.4 percent of Nevadans have been either fully or partially vaccinated. Nevada has received nearly 2.3 million doses of the vaccine for distribution.

According to the CDC, Nevada has received the 3rd fewest doses per capita of any state — the state was at 4th two weeks ago — at 75,750 per 100,000 residents. Alaska has still received the most doses per capita at 102,687 per 100,000. The federal government has told state officials that it is using the 2018 American Community Survey population numbers, which may not accurately reflect Nevada’s current population, to allocate doses to states.

Over the last seven days, 41 new COVID-19 deaths have been reported across the state, including:

Pershing County has had the highest number of deaths per capita in Nevada, with 30 deaths per 10,000 residents, followed by Nye County at 23 and Carson City at 22.

COVID-19 hospitalizations are fluctuating, though they are up from a low point last month.

There were 348 people hospitalized with COVID-19 as of Wednesday, the last day for which data is available, slightly down from 380 a week ago. The low point in the last week was 335 and the high point was 427.

The state hit a record low number of hospitalizations, 259, on March 28. Hospitalizations peaked during the fall surge at 2,025 on Dec. 13.

The Nevada Hospital Association, in its weekly report, noted that “significant increases” in hospitalizations may occur as health and safety restrictions continue to be lifted, but that hospitals are much better prepared than they were.

“Increases in hospitalizations would not be unfathomable and could be appropriately managed within the Nevada hospital system,” the association wrote. “The current situation is different than last summer. Hospitals have learned to adapt, treating thousands of COVID-19 patients.”

Four of the state’s 17 counties — Carson, Lyon, Elko and Lincoln — are considered at elevated risk for the spread of COVID-19 according to state criteria as of Thursday.

Carson City continues to have the highest case rate in the state at 456 cases per 100,000 residents in the last 30 days, followed by Washoe at 305, Lyon at 283, Clark at 239 and Churchill at 220. No other counties currently have an elevated case rate.