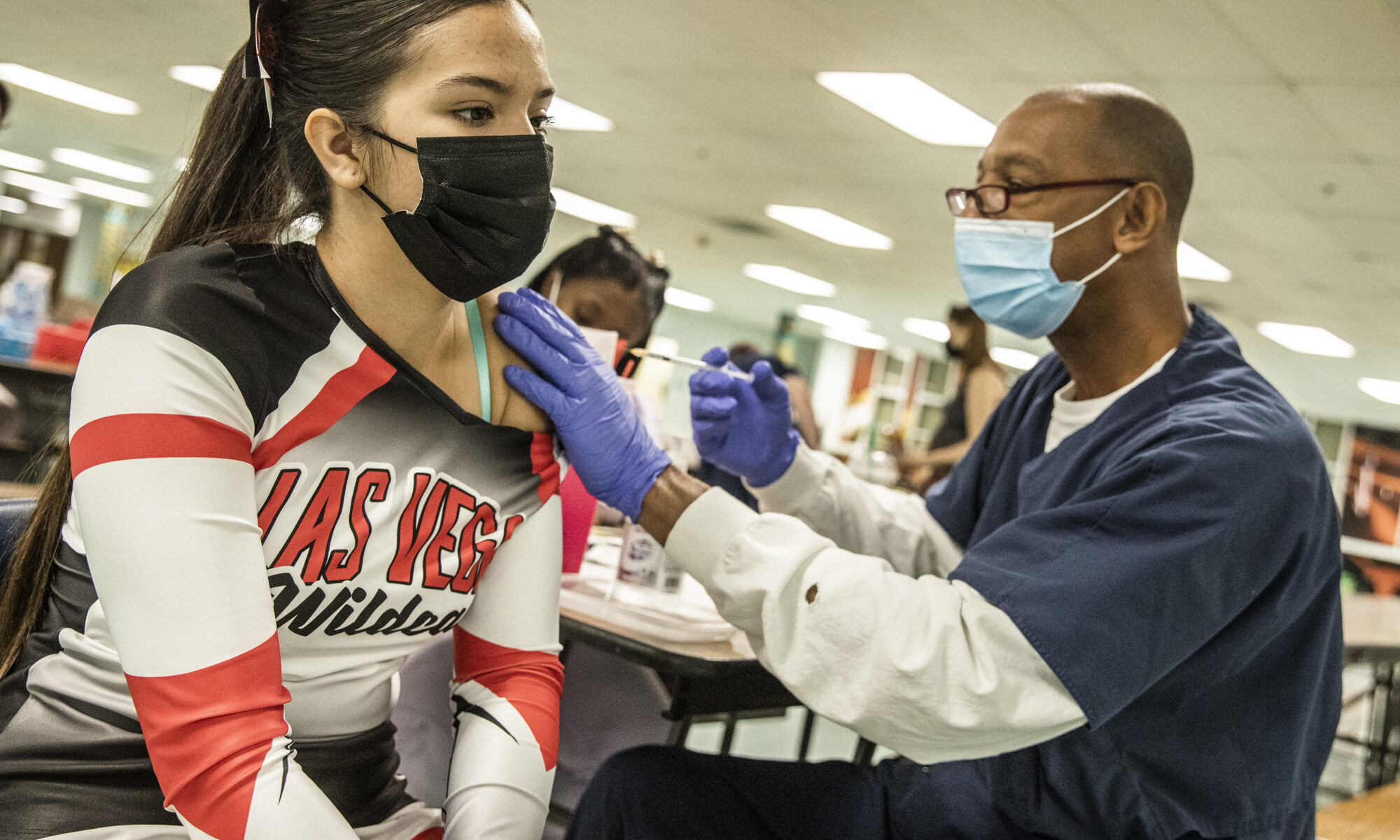 Welcome to the 61st installment of “Coronavirus Contextualized.”

Since the beginning of the pandemic, we have brought you the latest COVID-19 numbers in Nevada, including cases, hospitalizations and deaths, and provided context to them on a near-weekly basis through this series. (Prior editions of “Coronavirus Contextualized” live here.)

Below, we take a look at COVID-19 cases, hospitalizations and deaths as Nevada continues to recover from its summer Delta surge.

Statewide case numbers continued to trend down this week.

As of Thursday, 842 new cases were reported on average each day over the previous seven days, down from 956 last week and significantly down from the highest point of the current wave, 1,226, which the state hit on Sept. 13. That peak is higher than the highest point of last summer’s wave, 1,176, which the state hit in mid-July 2020, but a little less than half of the fall and winter wave record, 2,736, on Dec. 10, 2020.

In Southern Nevada, one of the earliest regions in the nation to be hit by the current wave of the virus, cases continue to trend down with some slight day-to-day fluctuations. The seven-day average was 468 as of Thursday, down slightly from 480 last week and down significantly from 917 on Aug. 1, the highest point of the current wave for the county. However, this summer’s wave in Clark County never got as high as the high point of the 2020 summer wave — 1,072 on July 20, 2020 — or the fall and winter wave, when the county hit its highest seven-day case average ever of 2,092 on Jan. 12.

Cases are also trending down in Washoe County, which was hit later and harder by the current wave of the virus. After hitting a high point of 304 on Sept. 15, cases have continued to decrease, hitting 188 on Thursday. Washoe County barely saw a wave last summer, reaching 98 on July 30, 2020, but experienced a significant winter and fall wave, peaking at 532 new average daily cases on Nov. 27.

Washoe County’s case rate is now just a little less than double Clark County’s, when adjusted for population size. As of Thursday, Clark County was seeing 21 cases reported per 100,000 residents each day over the previous seven days, compared to 40 in Washoe County. The case rate in rural Nevada, meanwhile, remains even higher at 54. While some rural counties have started to see declines in their case numbers, others, including Elko, Eureka and Humboldt, continue to report high volumes of new cases each day.

“Nevada counties are currently experiencing diverging trends in COVID-19 cases and hospitalization, with both cases and hospitalizations falling in Southern and Northern Nevada, but continuing to rise in rural Nevada,” Ellie Graeden, founder and CEO of Talus Analytics and an adjunct faculty member at Georgetown University’s Center for Global Health Science and Security who has been consulting with the state on its COVID-19 response, said during a press call this week.

That geographic divergence is also apparent in new K-12 COVID-19 case data released by state officials on Thursday. The data show that Clark County, home to more than 2.2 million residents, has had 1,600 COVID-19 cases among students and staff so far this school year, while rural Nevada, which only has about a sixth of Clark County’s population, has had 1,658 cases. Washoe County, which has about 470,000 residents, has had 898 cases.

According to the Nevada State Public Health Lab’s weekly lineage report, the Delta variant was responsible for at least 92.8 percent of sequenced COVID-19 cases over the last 14 days. (Not all COVID-19 samples are pulled aside for genetic sequencing, though sequenced cases are used to extrapolate a variant’s prevalence in the overall population.)

Since the beginning of the pandemic, there have been 421,319 COVID-19 cases confirmed statewide, meaning 1 in 7 Nevadans has tested positive for the virus. More than 7 percent of those cases, 31,961, have been diagnosed in the last month, and a little more than 1 percent, or 5,895 cases, have been reported in the last week.

The statewide test positivity rate, which looks at the percentage of tests coming back positive out of the total tested, is also once again decreasing after a brief period of fluctuations.

It is not possible to independently calculate the test positivity rate based on test encounters because the state only publicly reports the number of positive cases, not the number of positive test encounters. However, the state does provide this number, calculated as an average over a 14-day period with a seven-day lag. As of Tuesday, that number was 10.3 percent, down from 11.1 last week and significantly down from the highest point of the current wave, 16.4 percent on Aug. 13.

Since the beginning of the pandemic, nearly 2 million people — nearly 65 percent of Nevadans — have been tested for COVID-19, and there have been nearly 4.4 million individual testing encounters.

The pace of vaccine distribution in Nevada ticked ever so slightly up this week, likely the result of booster shots starting to be administered to older Nevadans, those with underlying medical conditions and those in professions that may put them at increased risk for COVID-19 exposure and transmission.

As of Thursday, about 6,300 vaccines were reported administered each day over the last seven days, up slightly from a recent low point of 5,700 on Saturday.

Since vaccinations started in December, more than 1.8 million people have received at least one dose of the COVID-19 vaccine and more than 1.5 million Nevadans have been fully vaccinated.

Among the counties, Carson City continues to have the highest percentage of residents fully vaccinated against COVID-19 at 58 percent, followed by Washoe County at 55.1 percent, Douglas County at 49.9 percent and Clark County at 46.6 percent. Tiny Storey County has still vaccinated the least, with only 17.5 percent of its residents partially or fully vaccinated.

Nationally, Nevada ranks 31st among the 50 states for percentage of its population fully vaccinated, behind all of its neighbors except Utah and Idaho, at 33rd and 48th, respectively.

In Washoe County, there have been 3,195 breakthrough cases as of Thursday, representing 1.2 percent of fully vaccinated people in the county.

Southern Nevada Health District data show that breakthrough cases currently represent only about a fifth of overall cases. Fully vaccinated people have made up 20.2 percent of cases in September so far, compared to 79.8 percent for unvaccinated people.

The number of new COVID-19 deaths reported on average each day continues to fluctuate, though it remains high.

As of Thursday, 24 COVID-19 deaths were being reported on average each day over the prior seven days, barely up from 23 last week and barely less than the high point of the current wave, 25, which the state hit on Aug. 30. Last summer’s surge peaked at an average of 21 daily deaths, while the fall and winter surge peaked at 45 daily deaths.

While those numbers have yet to see sustained decreases, they also have not increased from where they were a month ago.

“Statewide COVID related deaths decreased 5 percent from the last couple of weeks in September,” Graeden said. “This is a significant difference from the 50 percent increase that we’ve seen in deaths nationally over that same period.”

Over the last seven days, 167 new COVID-19 deaths have been reported across the state — up from 162 last week — including:

Hospitalization numbers have been steadily decreasing in Clark and Washoe counties, while they have just started to decrease in rural Nevada in recent days.

The Nevada Hospital Association, in its weekly report, noted these regional trends.

“Clark County and northern Nevada are seeing fewer COVID-19 hospitalizations indicating that the state has peaked and has crested the current wave of illness,” the association said. “Rural Nevada continues to be hard hit, with most staffed rural ICU beds at 100% occupancy.”

The hospital association noted that all-cause occupancy rates in Northern Nevada remain high, meaning that rural hospitals have had to transfer patients to Clark County instead. Clark County hospitals have also reported accepting patient transfers from other states, including Texas, Idaho, Utah, California and Arizona.

This week, Clark and Pershing joined White Pine as the only counties not to be considered by the state as at elevated risk for the spread of COVID-19.

All Nevada counties remain flagged for having high case rates, though Clark, Pershing and White Pine are not flagged for either of the other two metrics.

The state, however, continues to align its mask mandate with federal guidance, meaning it is using the CDC’s community transmission tracker to determine which counties are at substantial or high risk for the spread of COVID-19 and therefore required to abide by indoor mask mandates for vaccinated and unvaccinated individuals alike.

As of Tuesday, all Nevada counties were still considered at “high” risk of transmission. That means the counties remain subject to universal indoor masking precautions for both vaccinated and unvaccinated individuals.