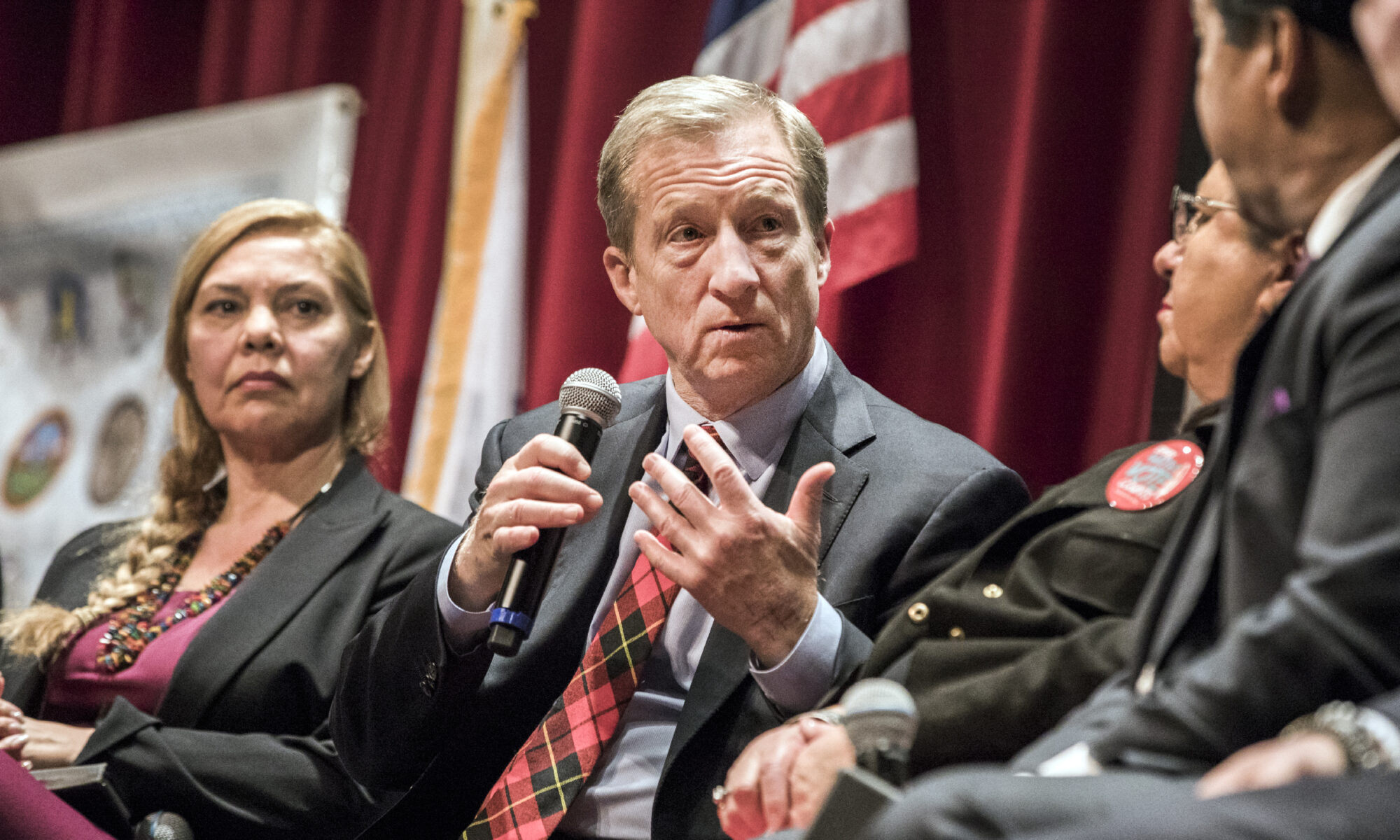 Democratic presidential hopeful Tom Steyer on Wednesday accused the Republican Party of “doing everything it can” to take voting rights away from Americans, especially Native Americans.

Steyer, speaking at the Native American Presidential Forum in Las Vegas, specifically took aim at a 2017 voter ID law approved by North Dakota Republican Gov. Doug Burgum that requires voters to provide proof of their street address or additional documentation for those who have P.O. boxes on their state-issued IDs. The arrangement is common among tribal members in many rural areas where there is no postal service and the law thus threatens to disenfranchise tens of thousands of Native Americans.

“Taking away the vote and the voice of Americans, particularly for people who’ve been discriminated against for centuries, crushes me … How I feel about this — I can’t even talk about it,” Steyer said, choking up. “It’s so wrong. And so, how much am I willing to do to fight that? Just about anything.”

When the Supreme Court let the law stand in 2018, Justice Ruth Bader Ginsburg noted in her dissent that 70,000 North Dakota residents lacked qualifying ID under the law. A study commissioned by the groups that sued the state found that 35 percent of Native Americans in the state would not have sufficient ID to be admitted at the polls.

Ballot access issues aren’t isolated to North Dakota, either. Some Native Americans in Nevada have historically had to drive between 50 and 100 miles to get to the nearest polling place.

The forum, hosted at UNLV by the voting rights advocacy group Four Directions and Nevada’s tribes, was the second-ever of its kind. Though the first Native forum was hosted in Sioux City, Iowa last summer, organizers wanted to hold another event in a state with a significant Native population and that will be primary a focus for get-out-the-vote efforts in 2020.

About 52,000 Nevadans, or 1.7 percent of the state’s population, identify as American Indian or Alaskan Native, according to the U.S. Census Bureau.

With the exception of Steyer, most of the candidates appeared via livestream or pre-recorded video message at the Wednesday forum, which took place the day after a televised Democratic presidential debate in Des Moines. Each candidate had one hour to give a stump speech and take questions, or have a campaign surrogate present on-site to answer questions, from tribal leader panelists. (Hawaii Rep. Tulsi Gabbard was the only candidate who did not have a surrogate present.)

Steyer’s show of emotion during the event earned applause from the tribal leader panelists who hosted the event and a crowd of about 70 in attendance, more so than any of the other Democratic presidential candidates who participated in the forum — former South Bend Mayor Pete Buttigieg via pre-recorded interview, and Gabbard and Massachusetts Sen. Elizabeth Warren via live stream.

Warren pointed out that she co-sponsored the Native American Suicide Prevention Act and the American Indian and Alaska Native Child Abuse Prevention and Treatment Act, and she urged an expansion of voter access.

“I want to pass the Native American Voting Rights Act and make sure that Native people have full and equal access to American democracy,” Warren said.

Early in the campaign, Warren faced criticism over a decades-old claim of Native American ancestry and her attempt to back it up with a DNA test, but the issue did not come up during the forum.

Before joining the event, Warren tweeted about the U.S. military’s pending proposal to expand the Naval Air Station Fallon in Nevada by about 600,000 acres — a plan that the Las Vegas Paiute Tribe has opposed — and promised that as president she would seek “free prior, informed consent” from tribes on decisions affecting their lands.

The Massachusetts senator also said that she would revoke what she described as the “ill-advised, and, in my view, improperly granted permits” for the Keystone XL and Dakota access pipelines that cross through sacred tribal lands.

Steyer was also pressed during his portion of the forum about the Fallon military base, as well as the U.S. military’s proposal to expand the Nevada Test and Training Range used by Nellis and Creech Air Force bases by 300,000 acres. The military installation would expand into the Desert National Wildlife Refuge, which encompasses sacred homelands of the Las Vegas Paiute Tribe.

“That would mean that [a greater] percent of our indigenous lands, the great state of Nevada, would be controlled by the U.S. military,” said Nevada Indian Commission Executive Director and Walker River Paiute Tribe member Stacey Montooth. “If elected president, how could you ensure that our tribal nations, cultural resources, specifically our sacred sites … how can you ensure that they’re protected and at the very, very least, that our tribal nations are compensated accordingly?”

In response, Steyer reiterated his opposition to turning over sacred Paiute land to the U.S. military, a position shared by other Democratic presidential hopefuls. Warren was the first to announce her opposition to the military’s proposed expansion into the Desert National Wildlife Refuge in September.

Steyer also stressed his opposition to the construction of a high-level nuclear waste repository at Yucca Mountain, something Congress has long considered and Nevada’s elected leaders have staunchly opposed.

“I know the story also of Yucca Mountain — that that is a sacred place for the Paiute people,” Steyer said. “And I know that every time there has been a desire to take over Native lands regardless of rights or sovereignty or law, people have gone about it aggressively, recklessly.”

Steyer, Warren and Buttigieg agreed on the importance of appointing federal judges and cabinet members who understand tribal sovereignty. Buttigieg added that, if elected, he plans to restore the annual White House Tribal Nations Conference, last held in 2016.

The candidates also addressed the issue of missing and murdered indigenous women, which has recently become a focus in Congress. Indigenous women who live on reservations can be particularly vulnerable because law enforcement seldom investigates because of tribal jurisdiction laws and offenders are rarely prosecuted.

Buttigieg touched on a Supreme Court decision limiting tribes’ ability to criminally prosecute non-Native perpetrators, making it harder to protect their members and set a precedent for those who commit violent crimes against them.

“We know that so many of these cases are cases where the perpetrator is non-Native. So, jurisdiction cannot stop with tribal citizens,” Buttigieg said. “This is something that will take an act of Congress to fix, and I’d support that act of Congress.”

“We have to take the funding that goes to the Indian Health Services and move it from discretionary to mandatory. If we made a promise, then we have to have the funding secured,” Buttigieg said.

Warren said it’s not enough to make promises about health care and other policies that Native Amerians have been calling for that are routinely broken by the federal government.

“You have to have the funding to back it up,” she said.