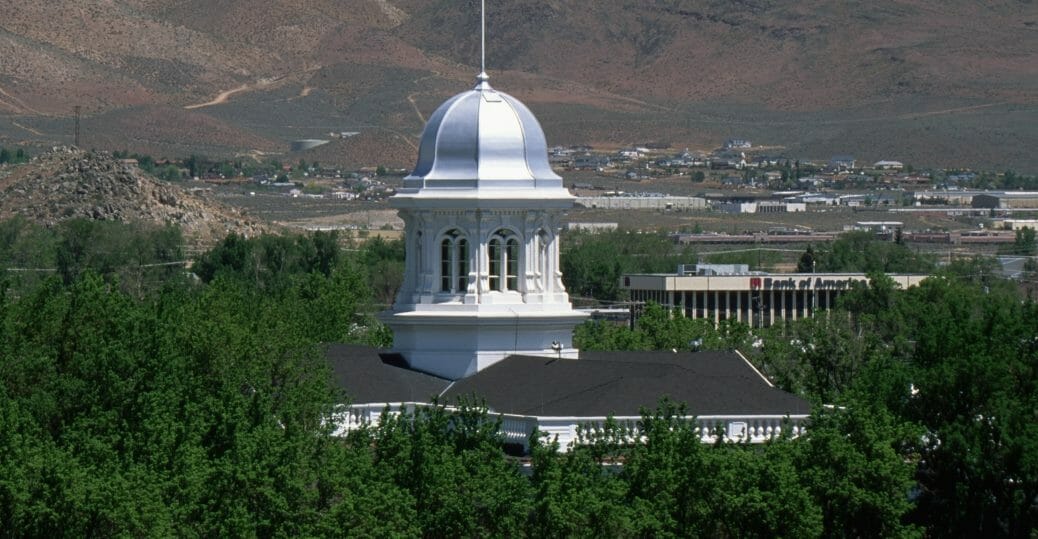 "The concept is to get more people involved in the process earlier on… I think everyone, in my opinion, should be voting in the primary and the general.”  ---Senator James Settelmeyer (R-Minden) on Feb. 7, 2017, to Reno Gazette Journal reporter Seth Richardson following the introduction of SB 103 which would provide for a top two primary.

"You want to get everybody’s voice in the process. I would like to see it open up in the primary. If I’m a registered independent and I like a Republican, I shouldn’t have to change my party affiliation.” ---Senator Patricia Farley (NP-Las Vegas) on April 10, 2016, to Las Vegas Review Journal reporter Sandra Chereb. Senator Farley was a Republican when she made this statement. She changed her registration to Non-Partisan in November, 2016.

The two statements above highlight the predicament faced by more than 27 percent of Nevada voters who are not registered to vote as either Democratic or Republican. Each month this number increases as more voters become frustrated with the level of partisanship that overwhelms our political system. As this number increases, the percentage of voters registered in one of the two major political parties declines.

This trend is not new. It started in earnest in 2008. Today, partisanship is the most divisive issue in our nation. It not only affects our personal relationships but also the effectiveness of our governing institutions and our economic well-being. In Nevada, we only have to look at the just completed election to see we are not immune.

Partisanship becomes an even more divisive factor when a significant portion of voters do not participate in, or are not allowed to participate in, the primary elections that determine what our choices are in the November election. In some cases, the winner of the November election is determined in the Primary with a relatively small minority of voters choosing who represents the entire district.

Under the current closed primary system, only members of a political party vote in the primary to choose the party’s nominee for each partisan political office. This process upholds a political party’s right of association, as private organizations, to control their internal operations. However, as party registrations decline, the percentage of party members making that choice are a small portion of the total registered voters, usually the most vocal, partisan members; primary election turnout averages below 20 percent.

This system does not foster an environment that is conducive to collaboration, cooperation, and problem solving.  Candidates and elected officials focus on what will ensure election / re-election. This requires taking positions that speak directly to the small partisan party base rather than all constituents. It makes campaigns negative and attack-based. This environment is what frustrates a large segment of voters leading to low interest and participation.

This situation can be corrected. State Senator James Settelmeyer, (R-Minden), has introduced Senate Bill (SB) 103 which if enacted will open the primary election process to all voters without infringing on a political party’s right of association.

Under SB 103, the primary election would he held using a system call Top-Two. This system is not new or untested. It is already used in some form in four states. It is also not new to Nevada. In the early 1900s, Nevada did not require party registration, and all candidates were listed on one ballot. The system is still used in primary elections in Nevada cities and in judicial elections.

SB 103 creates an environment where political parties might be able to reverse declining registration trends. It’s human nature to want to belong. As party ideology has drifted to the fringe, voters have left because the party no longer represents them. By moving the dialog away from the extremes, those voters who left or decided to register with no party affiliation could once again feel their views are represented. The parties stand a chance to regain these voters.

Top-Two is also fairer to taxpayers. Closed primary elections, while an internal operation of the party are paid for by tax dollars. This means that members of the Democratic Party are paying for the Republican Party primary, Republicans are paying for the Democratic Party primary, and those registered to vote as Non-Partisan or in one of the minor parties are paying for both. All without benefit. With all voters allowed to participate in a Top-Two primary, all taxpayers receive benefit from their tax dollars.

Top-Two also addresses another issue important to many Nevadans, automatic voter registration (AVR). AVR automatically registers a person to vote or updates their current voter registration any time the voter makes a transaction and the Department of Motor Vehicles (DMV), unless the voter specifically opts-out. The legislature will take this up this session when they consider Initiative Petition 1 (IP-1).

Approximately 41 percent of eligible voters in Nevada are not registered to vote. Of that, only 25 percent haven’t registered because they either missed a deadline or do not know how. AVR will address these eligible voters. However, unless the reasons for the other 75 percent are addressed, AVR will most likely only result in turnout rates falling since the numbers of voters increases without a corresponding increase in voter participation.

The 75 percent mentioned above are those who believe the system is broken, their vote does not matter, and candidates do not address issues, among other similar reason. Top-Two primaries create the necessary environment to address those concerns. Since candidates must address a larger segment of voters who have varying positions spread across the ideological spectrum, campaigns tend to more issue oriented and less negative. As a result, the legislative process also becomes more collaborative and results focused. Bottom line, SB 103 should be viewed as a companion bill to IP-1.

The first step has been completed with the formal introduction of SB 103. The next step is the committee hearing in the Senate Legislative Operations and Elections Committee. Those who support the bill are encouraged to contact committee chair Senator Nicole Cannizzaro to ensure a hearing, testify at the hearing in person (Carson City, Las Vegas, or Elko) or submit written testimony to the committee. Contact information can be found here. The hearing date, when known, will be posted on the blog and on NELIS, the legislature’s session information site.

Additional articles by Doug Goodman including monthly voter registration analysis can be found on his Nevada Election Modernization and Reform Act blog. You can follow him on Twitter at @nvelectreform.

Do you disagree with SB 103? Op-eds are welcome at submissions@thenvindy.com.