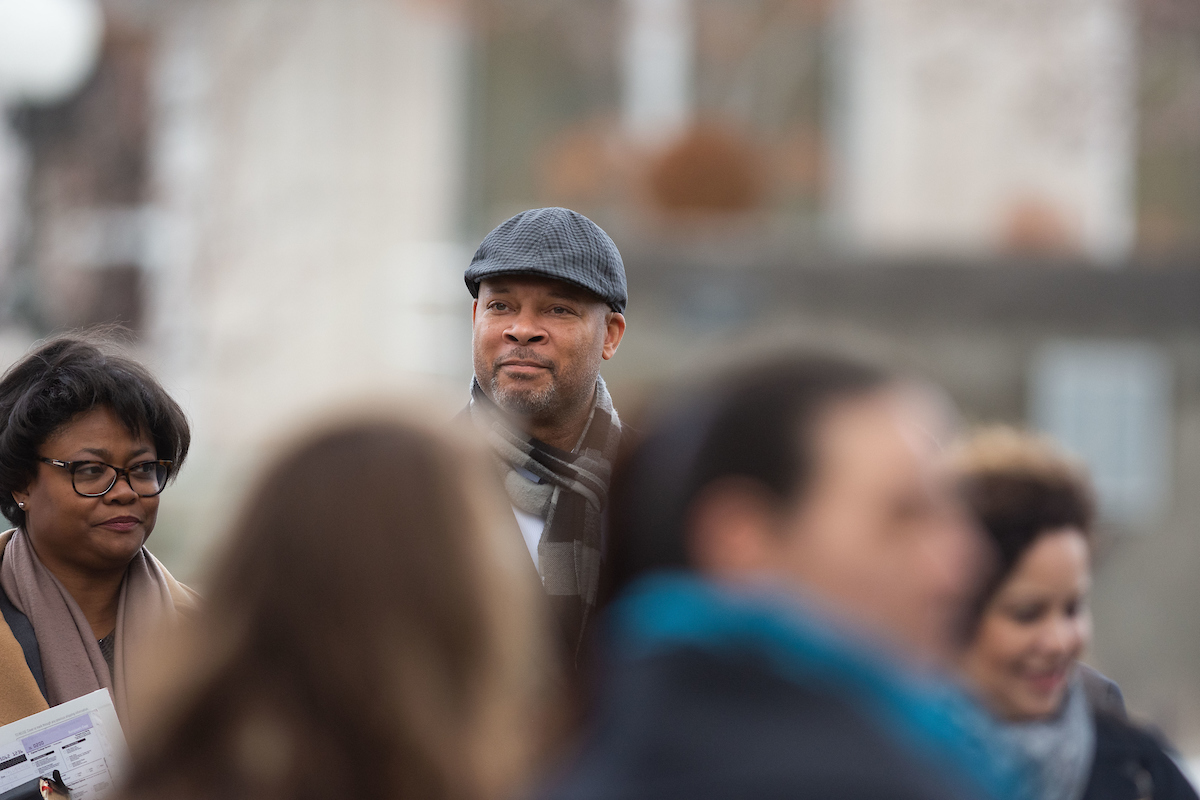 Attorney General Aaron Ford blamed increasing allegations of voter fraud in part on a vitriolic political climate and stood by his office’s legal opinion on allowing the removal of tax petitions from the 2022 ballot.

Ford, a Democrat, weighed in on a range of legal topics from capital punishment to voter fraud and questions of executive authority during a wide-ranging interview with reporters Saturday morning, noting that his primary role as attorney general is to uphold the law.

He reaffirmed his office’s decision to green-light the withdrawal of gaming and sales tax initiatives put forward by the Clark County Education Association last year, despite Secretary of State Barbara Cegavske insisting the petitions should remain on the ballot. Lawmakers passed a new law in 2021 authorizing the removal of initiatives before an election, but Cegavske said the change would violate the state Constitution.

“Reasonable minds disagree on things all the time. How do I know? [The] Supreme Court comes down 5-4 on decisions all the time,” Ford said in his Carson City office. “The analysis that we came up with in our attorney general opinion was that it wasn’t an outright violation of the Constitution and there was an interpretation that allows the Legislature's actions to be upheld.”

He also dismissed Las Vegas city councilwoman and Republican gubernatorial candidate Michele Fiore’s recent attack on his office’s hiring practices and criticism of affirmative action policies, which aim to increase workplace and educational opportunities for underrepresented members of society. Ford said he would not participate in political back and forths.

“I don't play into wedge issues. I just do what I think is right. I don't feel as though I have to be 100 percent compliant with anybody, anything, any person, except for my conscience. And as long as I can sleep at night, I feel like I’ve made the right decision,” he said, discussing his decision to sign onto an amicus brief supporting Harvard University’s use of race in its admission process.

Affirmative action is essential to support marginalized individuals and foster diversity of thought and opinion, Ford said, adding that Fiore’s accusation that “you can't get positions [in the attorney general’s office] unless you are Black” is unfounded. He said he had no idea what Fiore meant when she said he was “putting our Asian American and our Pacific Islanders down at the bottom of the totem pole.”

“You look at the diversity of my office, and you will see that clearly she doesn’t know what she's talking about,” Ford said. “I surround myself with diverse folks so that I can ensure that I can make the most informed decision that I can.”

Below are some highlights from the interview.

Ford described the voter fraud charge against Donald Kirk Hartle, who is alleged to have voted his deceased wife’s ballot, as a “one-off case.” He said the complaint against Hartle, filed last month, is only the second time Ford’s office has prosecuted someone for voter fraud.

“There's always some person who thinks they can test the system,” Ford said. “I don't think that we're going to see many more of these types of things come up, but to the extent these one-offs continue to arise, we will investigate them and I will prosecute them as I've demonstrated my propensity to do.”

The process for reviewing cases of voter fraud begins in the secretary of state’s office. If investigators in the department believe a case is worth looking at, they forward it to the attorney general’s office, where Ford said he and his staff evaluate whether they have enough information to prosecute.

More than 3,000 election integrity violation reports were filed this year, roughly 28 times more than in recent election years. Ford said he believes the increase is a byproduct of the current political climate.

A review by the secretary of state’s office of the Nevada Republican Party’s alleged evidence of voter fraud found that of 1,506 voters the party alleged to have voted by mail even though they were deceased, only 10 were actually deceased, according to the Office of Vital Statistics. The report, released in April, said those 10 individuals were referred for investigation by law enforcement.

Cegvaske’s office concluded in the review that the evidence presented by the party did “not amount to evidentiary support for the contention that the 2020 general election was plagued by widespread voter fraud.”

The attorney general would not comment on whether he has had any communication with Cegavske after she informed his office that two tax petitions key to final negotiations in the 2021 legislative session would have to remain on the 2022 ballot.

State lawmakers in the waning hours of the session adopted an amendment allowing the backers of voter petitions to withdraw the proposed ballot questions before an election — aimed at allowing the Clark County Education Association to withdraw a pair of tax initiatives that otherwise would automatically proceed to the 2022 ballot.

Ford, whose office issued an opinion backing the Legislature’s decision, said any question about his office’s findings would be decided by the courts.

Since launching his campaign for governor, former U.S. Sen. Dean Heller has reiterated a promise that if elected, he would issue an executive order requiring every voter to show identification at the ballot box.

“Gov. Sisolak in the last 18 months has acted under emergencies, under NRS 414. That gives him the exact authority to do what he's done,” Ford said. “If the emergency is still existing at the time of the next election, which we hope not, then NRS 414 will still be in effect, or still be available to the governor. If it is not, then the powers that the governor has utilized under that statute won't exist for the governor in the next session.”

Ford said any legal action relating to an executive order would need to be reviewed on a case-by-case basis.

“Obviously, we have separation of powers for a reason,” he said. “I would suspect that there would absolutely be litigation surrounding an effort to usurp the authority of that Legislature if he were to issue an executive order that essentially legislates.”

Ford said such a lawsuit could come from his office or an outside entity but did not say whether his office would legally challenge a voter identification policy brought through an executive order.

In light of legal challenges to the use of the drug midazolam in lethal injections — after an inmate who was executed with it Thursday in Oklahoma began convulsing and vomiting — Ford said the use of the drug could violate the Eighth Amendment that prohibits any cruel and unusual punishments. His office represents the state prison agency in death penalty cases.

“We're going to have to entertain questions around whether our cocktail and our protocol is sufficiently different from Oklahoma's. I think that's fair to say,” Ford said.

His statement comes as Nevada’s court system evaluates the constitutionality of using lethal drugs in the state’s first planned execution in more than 15 years.

Zane Floyd, who was convicted of killing four people and injuring a fifth person inside a Las Vegas grocery store in 1999, was originally sent to be put to death on July 26, 2021. However, following arguments that Nevada’s use of lethal injection is a cruel and unusual punishment, a federal judge stayed the execution and ruled that the state needed more time to determine whether the proposed method of killing Floyd violates his constitutional rights.

Floyd’s counsel argued for more time on the grounds that one of the drugs included in the protocols, ketamine, would be used for the first time in an execution.

If someone is set to be executed, Ford said he would ensure inmates are protected under the Eighth Amendment.

“The courts are going to determine whether the cocktail, so to speak, is properly constitutional and if they say it is, then I'm going to continue doing my work, as the top law enforcement official in the state, to enforce our law, but ensure that it's done in a constitutional manner,” Ford said.”

A District Court judge barred the state from using midazolam to execute inmate Scott Dozier in 2018 after a last-minute challenge by the drug’s manufacturer. Dozier later died in an apparent suicide.

If executed, Floyd would be the first death row inmate to be put to death in Nevada in more than 15 years.

As for the state’s upcoming redistricting process, Ford said his office is prepared to engage in litigation and legal discussions around the issue when the time is right to do so, but could not discuss any specifics.

Lawmakers are planning a special session in the coming weeks to complete the redistricting process, which was delayed because of the COVID-19 pandemic.

“We are obviously monitoring what the Legislature is doing, and what the respective municipalities are doing to the extent we have to get engaged in that kind of stuff,”  Ford said. “Our responsibility will be to defend — if it is patently unconstitutional that is one thing, but if it's constitutional, we're going to be defending the lines that are legislated.”