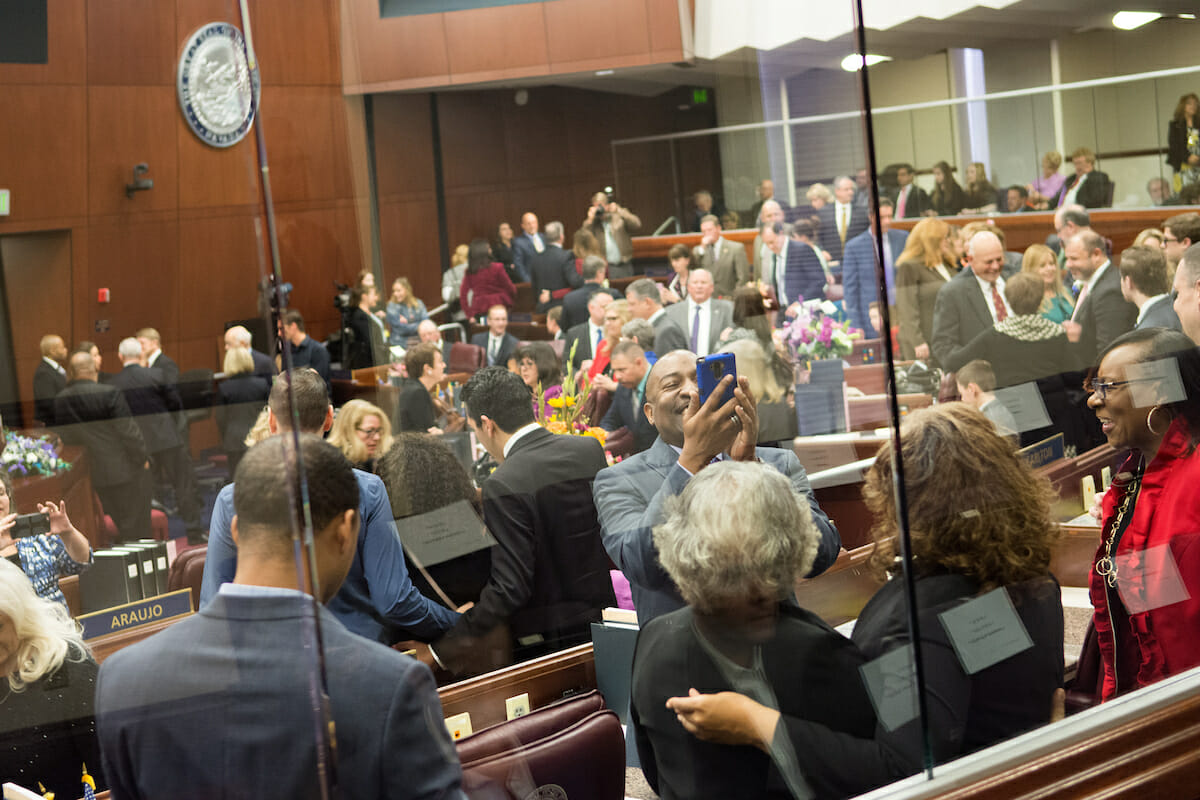 There was a lot of ceremony and not much debate on the first day of the legislative session, but Nevada lawmakers did introduce more than 200 bills on Monday. Here are some of the noteworthy proposals that came up in the Assembly and were referred to committees, where the serious debate will begin.

People would no longer have to wait until they’re 21 to gamble under a bill proposed by Republican Assemblyman Jim Wheeler. AB86 proposes lowering the gambling age to 18. That would mean younger people could play slots, make sport bets and play at the tables, as well as work in a casino and hang out in places where there’s gambling. The bill comes as annual gambling revenue statewide hit $11.3 billion in 2016, but still fell short of the $12.8 billion record reached in 2007, before the recession.

A bill requested by Attorney General Adam Laxalt’s office would require police to send rape evidence kits to a lab for testing within 30 days of receiving them. The kits contain samples such as hair and bodily fluids from people who say they’ve been a victim of sexual assault, but scarce funding and other obstacles sometimes prevent law enforcement officials from promptly sending them off for DNA analysis. Laxalt’s office found funding to help reduce a backlog of thousands of untested kits -- some decades old -- that could help solve cold cases. The bill, AB55, could run into trouble because it contains an unfunded mandate, meaning it’s requiring agencies to do something but not providing the money to implement it.

The Governor’s Office of Economic Development is backing a bill it hopes will help the state bring self-driving cars to Nevada. The state was the first to legally allow testing of autonomous vehicles on state roads when the Legislature passed a bill in 2011, but the law requires a human operator who is able to take immediate control of the car if the self-driving technology fails.

Under the new proposal, called AB69, vehicles could drive themselves on Nevada roads without human operators or with just passengers inside. The technology is already in use in places like Pittsburgh, where self-driving Ubers were picking up passengers in September but had a “safety driver” behind the wheel to take over in bad weather or other adverse conditions.

Nevada schools are asked to teach middle and high school students CPR as part of their health class as long as money is available. But a new bill, AB85, would require secondary schools -- both public and private -- to teach students CPR and how to use an automated external defibrillator. The bill will likely attract opposition because it’s considered an unfunded mandate.

Gov. Brian Sandoval has requested a bill that extends in-state tuition to more military families. The better rates would affect children and spouses of service members stationed in Nevada or another base with a specific nexus to Nevada and military members who previously served on a base in Nevada and were honorably discharged. Sandoval has often said he wants Nevada to be known as the most veteran-friendly state in the country. The bill, AB24, was sent to the Assembly Education Committee.

No parole for murder of police

A person convicted of murdering a peace officer wouldn’t have any hope for parole if lawmakers pass AB90, a bill proposed by Wheeler. Existing law penalizes murder with the death penalty, life imprisonment, life with the possibility of parole or a 50-year sentence. The bill would ramp up those penalties if the victim is a police officer or corrections officer.

A new bill aims to extend protections for transgender children in child care facilities, foster homes and juvenile detention centers. AB99, sponsored by Democratic Assemblyman Nelson Araujo, requires those agencies to treat children as having the gender with which the child identifies, regardless of the biological sex of the child. It also requires child welfare workers to take at least two hours of training within a month after they’re hired to learn how to work with LGBTQ youth. Araujo is also sponsoring other LGBTQ rights legislation, including AJR2, a proposal that would enshrine in the Nevada Constitution the right to marry a partner regardless of gender.

A bill requested by Republican Nevada Secretary of State Barbara Cegavske would give new businesses that are majority-owned by veterans a discount on their registration fees. The annual fees are $500 for certain corporations and $200 for other businesses. The bill, AB44, would waive those fees for the first four years of a qualifying business’ operation.

Sandoval sought a bill that takes away debt collection responsibilities from the state controller’s office and transfers them to the governor’s finance office. The controller can currently make agreements with debtors, set payment plans and contract with private collection agencies, but the bill, AB51, would send all those duties to the governor’s office. State auditors recommended the shift last year, noting that the controller’s office doesn’t have much authority to enforce debt collection statutes or audit agency debts. The Nevada Appeal reported that Republican Controller Ron Knecht and Sandoval -- who have been at odds with each other in the past over the governor’s Commerce  Tax -- both agreed this move made sense. The Assembly Government Affairs Committee will take up the bill.