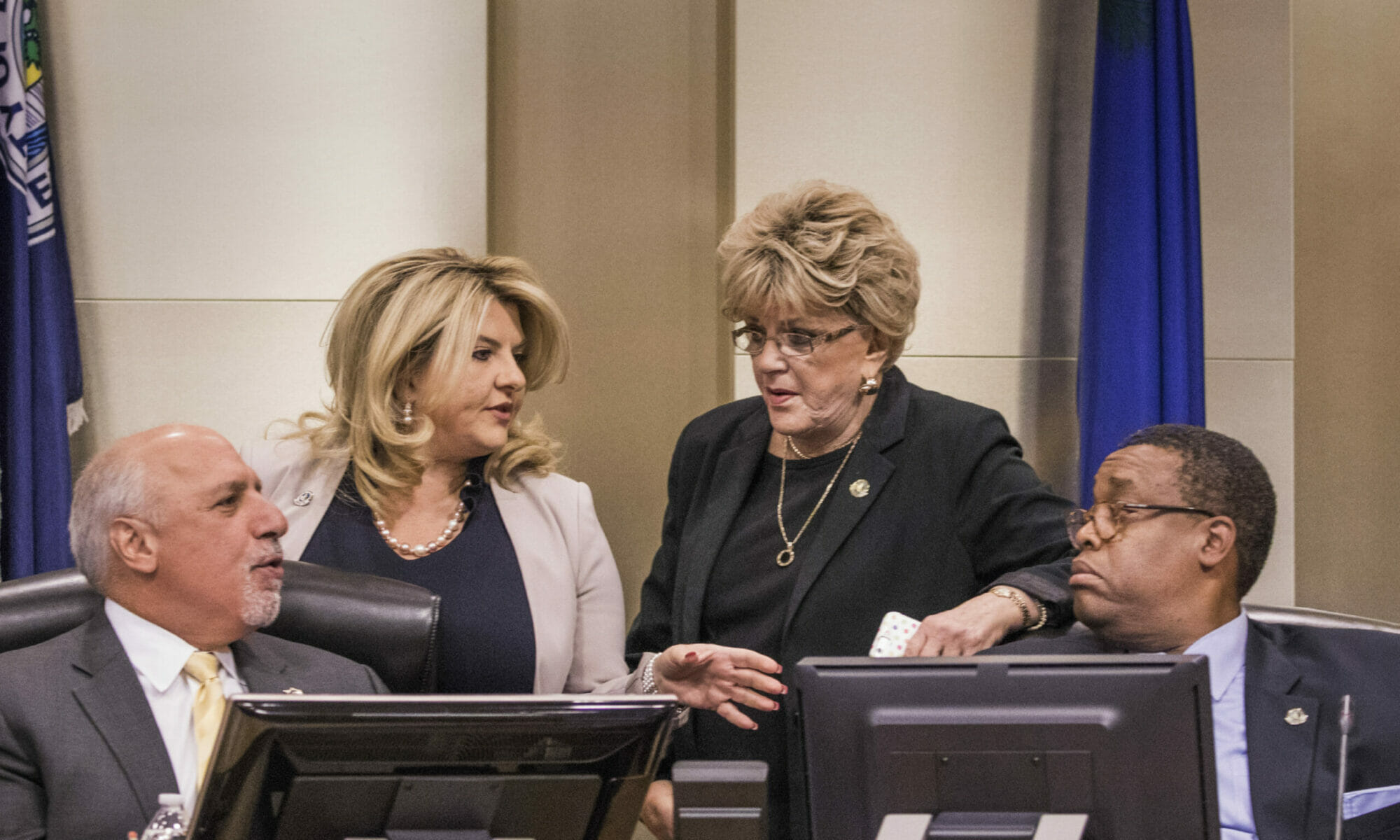 There may have been homeless advocates protesting outside City Hall Thursday evening and street campers just blocks away, but Las Vegas Mayor Carolyn Goodman didn’t miss a beat during her State of the City address in the council chambers with its “Back to the Future” theme.

Like Las Vegas mayors before her — especially the one she lives with — she’s a glass more-than-half-full kind of person. Goodman didn’t actually say the words “Let them eat cake,” during the brief aside she devoted to the city’s ongoing homeless crisis. But, well, mostly she let them eat cake.

Did anyone inside the building notice?

Were the people watching on the city’s website, as I was, filled with a righteous indignation?

I’m guessing the answer is, “Not many.”

For her ninth address, the city’s chief promoter of redevelopment promised some “fun surprises.” By that I think she was talking about that “Back to the Future” theme, which included a video skit accompanied by former Mayor Oscar Goodman and featured a ride through time in a DeLorean. After giving a heartening reflection about her struggle with cancer, she unpacked a remarkable amount of good news about the progress being made in a corridor that was down-at-the-heels at the start of the new century. Make no mistake: Although it sometimes goes on like a visit to a dentist office, in Las Vegas the State of the City address is a celebration, an advertisement for the great American boomtown. Every speech in one way or another is a variation on a “Back to the Future” theme.

Homelessness? It’s a real downer. And nobody at a party likes a downer.

There’s a lot to celebrate at the city these days. Economic growth has returned to the valley. Inside the city limits, and especially the downtown redevelopment zone, the dizzying expansion includes a new $56 million municipal courthouse constructed by the Molasky Group, Derek Stevens’ Circa hotel-casino high-rise, progress in the Las Vegas Medical District, the Arts District, Cashman Field, and the Fremont Street Experience canopy. There’s also the International Innovation Center, the Expo trade show center and other expansion at Symphony Park and elsewhere. Even the beleaguered Huntridge Theater received a shoutout for yet another planned comeback.

Goodman raised the homeless issue approximately one hour into the program and lauded the efforts of Catholic Charities, the Salvation Army and other organizations and nonprofits that are dedicated to helping the needy on the street.

That done, she touted Mayor’s Fund and the city’s new Courtyard Homeless Resource Center and defended a controversial new ordinance that would make camping in many areas of the city a crime punishable by up to six months in jail if homeless refuse available social services. Similar laws are in effect in dozens of other jurisdictions as cities struggle to address the issue.

Then she went further, jabbing at critics and painting the homeless as dangerous and germ-ridden.

“Those responses that say the city is trying to criminalize the homeless, our entire effort is humanitarian and compassionate,” Goodman said. “I will not allow the City of Las Vegas to become a skid row harbor of rampant crime and potentially pandemic disease.”

And again, “The City of Las Vegas is no longer tolerating the extremely dangerous, safety sanitation and health conditions that face us daily and put us all in jeopardy.”

At one point she sounded almost like a homeless advocate, “Our country, our state, this city government must provide safe, healthy and supportive caring facilities for those who cannot choose or cannot care for themselves.”

The truth is harder to spin.

I think Goodman missed a real opportunity to level with her audience, filled with innovators and influencers in the business community, and admit that the city and county are under-equipped to fully address this complex issue.

In Las Vegas, as in most cities, the poor and homelessness is a “them” problem. No one wins election advocating for the rights of the downtrodden. Beyond the noise of a few dozen protesters, there’s no community uproar on this issue. Elected officials, even those who care, know the homeless and their allies aren’t a powerful voting bloc.

Reporters and other hand-wringers may dwell on it and some government staffers have devoted their careers to addressing it. The city’s no-camping ordinance has been jeered by advocates for the unwashed, and even its new outreach center has been panned by some who’ve tried it.  While the enthusiasm for growth appears unlimited, the budget for compassion is always tight.

The complex problem of homelessness in the valley’s urban core promises to remain long after the applause has faded and the city’s latest, greatest cheerleader has left the stage.