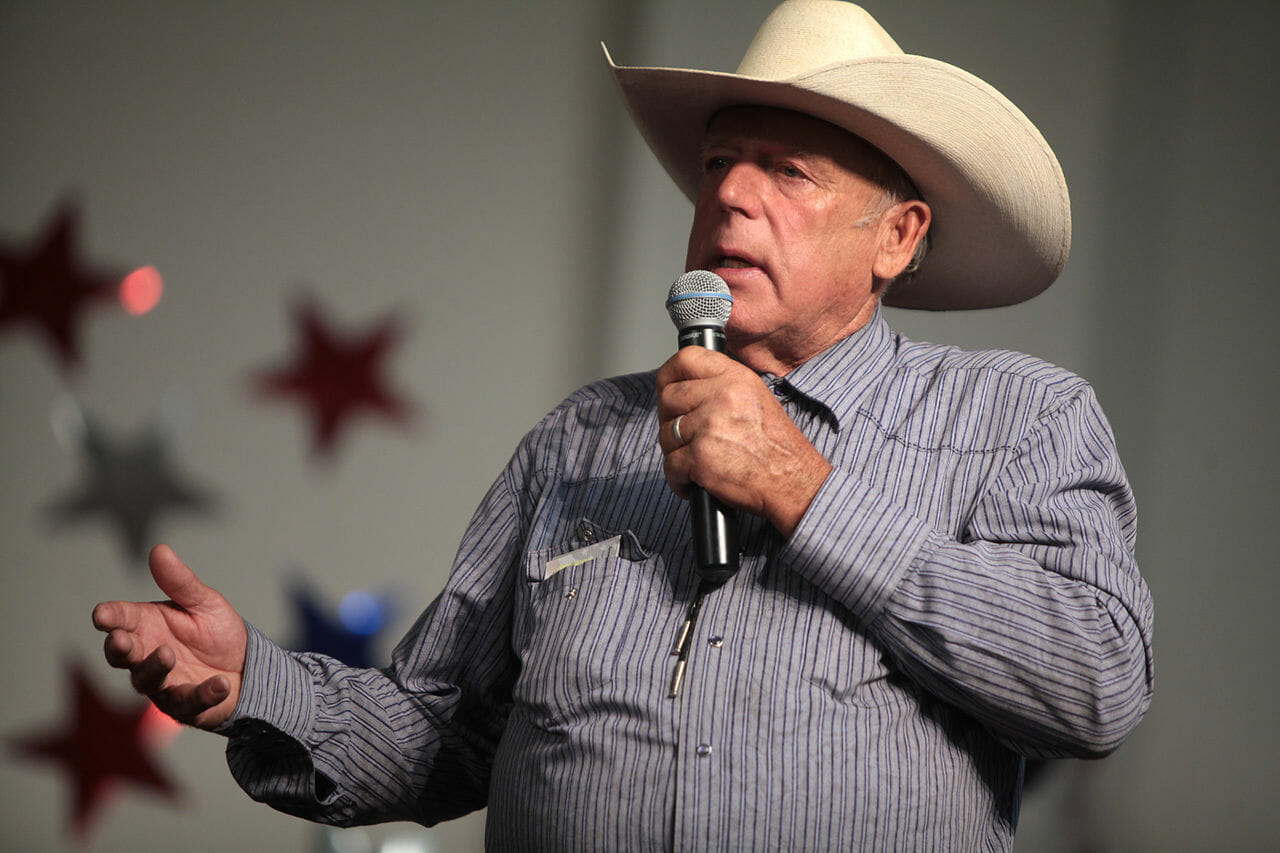 Toquop Wash is a broad swath of alluvial that cuts across Interstate 15 and stretches down to the Virgin River outside Bunkerville about 80 miles northeast of Las Vegas.

Any way you look at it, it’s one ugly patch of ground. It also would appear an unlikely place for a New West shootout.

But on April 12, 2014, with tensions rising under a desert sun between hundreds of supporters of recalcitrant Bunkerville rancher Cliven Bundy and officials of the Bureau of Land Management, Toquop was a car backfire or accidental gun discharge away from erupting in a bloodbath.

That much surely everyone in U.S. District Judge Gloria Navarro’s courtroom understood Thursday during opening statements in the trial of six men accused of threatening federal officers and acting as Bundy’s gunmen as part of a larger criminal conspiracy. With the prosecution and defense showing dramatic photographs of the defendants carrying high-powered rifles and heavily armed BLM officers dressed in tactical gear, the standoff sure looked like a match strike from hell on Earth.

In the end, no shots were fired. Tragedy was averted. The BLM avoided calamity by packing its gear and retreating. Bundy’s band of family, friends, true believers and curious libertarians celebrated the apparent victory with a banner on one bridge that read, “NOW THE WEST HAS BEEN WON!”

Except that, it wasn’t true. Contrary to Bundy’s ardent but legally flawed credo about states’ rights and the county sheriff being the lawman in charge, like it or not in the modern West the federal government has standing over public lands.

The government would return, the next time with criminal subpoenas and an eventual superseding indictment, a powerful legal counter-narrative set against Bundy’s promise that he was willing to do “whatever it takes” to retrieve his cattle and remain in the saddle on the open range.

It’s important to remember that feuds between western ranchers and the BLM aren't new. There's long been a clash of philosophical views of the role of the federal government in the West, and especially in Nevada, where approximately 85 percent of the land is public and federally managed.

The challenge for the six men on trial for conspiracy, assault and other charges is that the prosecution promises its evidence is larded with incriminating testimony, photographs and compelling video and audio. The defense has called the jury’s attention to the potential constitutional issues, but the presence of all those Bundy guns in the middle of a government cattle roundup will be hard to explain away.

This wasn’t Assistant U.S. Attorney Steven Myhre’s first roundup. His opening statement was dramatic and captured the tension felt by BLM officers who he said were just trying to do their jobs in an increasingly hostile environment.

The defense was up to the challenge of raising first and second amendment issues and reminding jurors that the government’s questionable tactics resulted in minor altercations that went viral on the Internet and drew the defendants to Bunkerville out of a sense of righteous indignation and the protected right of protest.

“This case, folks, is all about standing up for what you believe in, nothing more and nothing less,” defendant Steven Stewart’s attorney Richard Tanasi offered.

The BLM and other government officials who participated in the roundup and the questionable security strategy may also have tough questions to answer. Recently published reports are raising serious ethical issues about former BLM special agent in charge Daniel Love, who was in charge of carrying out the court-ordered action.

The federal law enforcement officers in the wash that undeniably stressful day may have feared for their lives, but with a modicum of planning they would have been able to avoid ceding the high ground to a crush of mostly unarmed protesters.

Testimony is set to begin Monday in the trial, which expected to last up to 10 weeks and provide insight into the prosecution’s case against Bundy, his family members, and the people the government characterizes as leaders of the conspiracy.

With all the drama, it’s easy to forget that the standoff was supposed to be about more than just a rancher’s trespassing cattle.

A homely gravel bed, it’s no place to die. Not for cows.

But in the New West, where federal land managers have a military edge and a cattle rancher’s followers use the Internet to attract well-armed allies, it looks like all bets are off.

Photo of Cliven Bundy speaking at a forum hosted by the American Academy for Constitutional Education at the Burke Basic School in Mesa, Arizona. Source: Wikimedia via Gage Skidmore from Peoria, AZ.