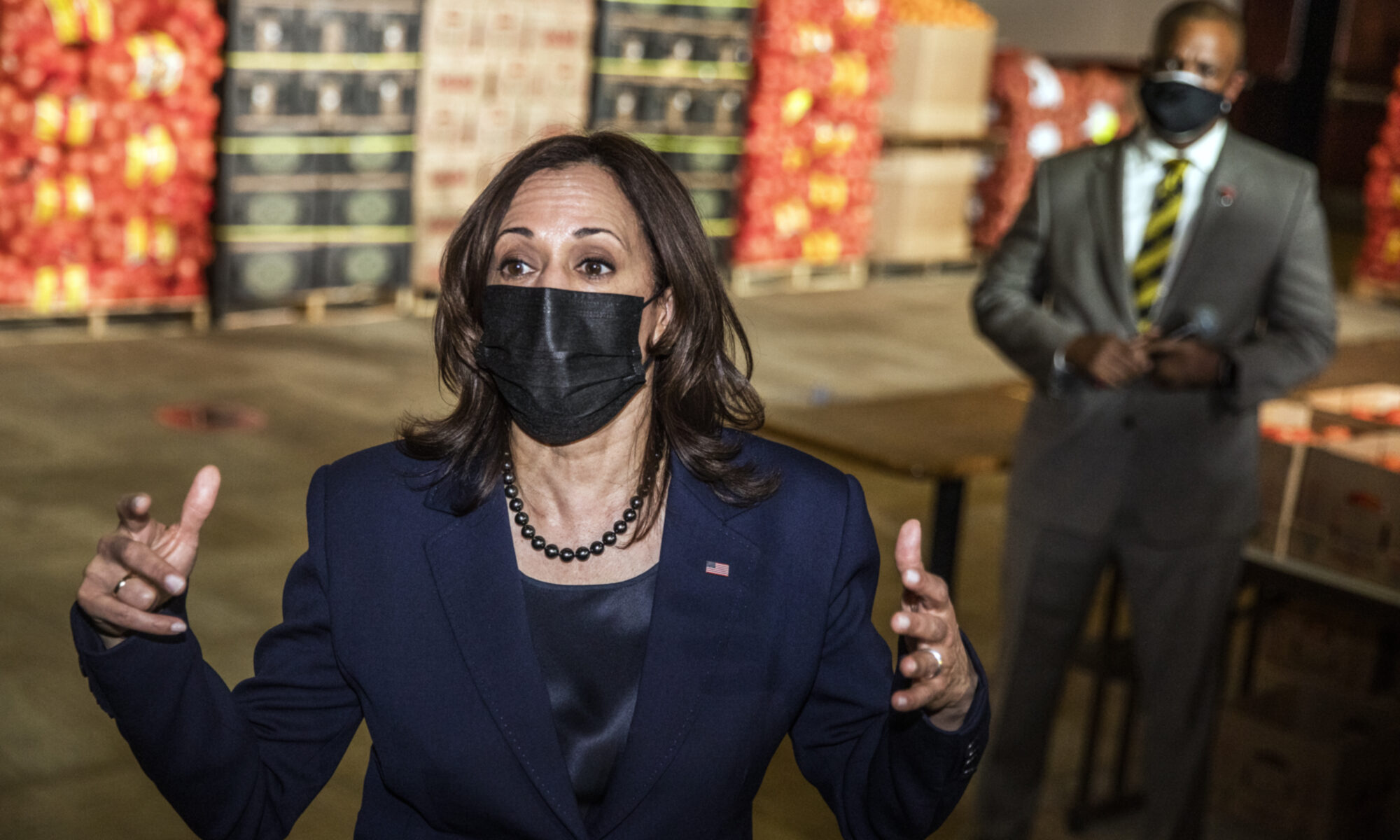 “What I want to do is make sure that people know what they're entitled to in the American Rescue Plan,” Harris said at the Culinary Academy of Las Vegas. “It's not selling … think of it more as a public education campaign. This is what's happening. This is what you're entitled to receive. And so go out there and get it.”

Harris highlighted the $1,400 direct payments, $3,000-plus child tax credits and the six-month extension of unemployment benefits that are part of the bill.

Surrounded by thousands of pounds of fresh produce being packed into boxes for Clark County families in need, she also said that Nevada has been hit particularly hard by the pandemic because of the state’s dependence on the hospitality industry. Last April, the state’s unemployment rate hit 28 percent — the highest in the nation.

“I've learned, one, that people are suffering, but we knew that before, and we knew it based on the statistics. But the stories add much more color to that point,” Harris said. “Folks want to work. And for those who are in industries where they may not get rehired, what that is going to mean for them in terms of prolonged suffering.”

When asked by reporters at the event whether tax increases are being considered as the next step of the pandemic response, Harris said she doesn’t know and that she remains focused on getting the message out about the American Rescue Plan.

While at the Culinary Academy, Harris also met with Rep. Steven Horsford (D-NV) and Mark Scott, CEO of the non-profit hospitality training institute that partners with local unions. They discussed the ongoing efforts of the academy’s Community Food Assistance Program, which has provided Clark County residents with more than 12 million pounds of food since the beginning of the pandemic.

During her opening remarks there, Harris said “help is here,” echoing the same language of a new Democratic National Committee campaign that began running television advertisements in Las Vegas on Monday. It seeks to tout the success of the Democrats who passed the relief bill and slam the Republican lawmakers who opposed the bill.

Prior to her visit to the Culinary Academy, Harris spoke with nursing and medical students at a vaccination clinic at UNLV, alongside Gov. Steve Sisolak. She was then joined by Attorney General Aaron Ford at Tacotarian, a Mexican restaurant in Las Vegas serving plant-based fare, where she talked about the importance of small businesses.

The second gentleman visited Three Square Food Bank on Monday afternoon where he toured the facility and talked with community members who have been affected by food insecurity. The organization is the area’s largest hunger relief organization, serving Clark, Lincoln, Esmeralda and Nye counties.

During his visit, Emhoff stated he was there to “listen and learn” about the organization and the people in need, as it helps him understand issues and relay the information back to the administration.

He also met Robert Thompson, deputy administrator of the Division of Welfare and Supportive Services, who expressed his gratitude for the American Rescue Plan and its $12 billion for food assistance programs such as the Supplemental Nutrition Assistance Program (SNAP) intended to mitigate the nation’s extraordinarily high levels of hunger and hardship. At the height of the pandemic, one in six Nevadans was enrolled in the food stamp program.

Emhoff listened to the stories of three community members who have experienced food insecurity and then were helped by Three Square, as well as Pastor Bobby Smith of the New Beginnings Ministries in North Las Vegas, who shared how his church has been a source of help and support for many.

“We have been overwhelmed with some of the situations. This has been one of the most depressing years of my life,” Smith said. “If it wasn't for Three Square, we wouldn't have made it.”

The church has helped feed hundreds of families. Smith said he turned his living room into a grocery store for his church members to take what they needed.

“You’ve come to the right place to start your tour because this is ground zero for the wrecking ball of COVID, on both health and the economy,” said Brian Burton, President and CEO of Three Square. “Because it shattered us a year ago this week.”

Harris and Emhoff will also be traveling to Los Angeles on Monday, before visiting Denver on Tuesday to continue to promote the American Rescue Plan. Harris will then travel with Biden to Georgia on Friday, as her next stop on the tour.