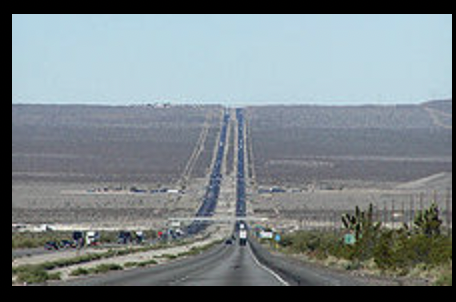 Clark County has a problem.

No, it’s not the Delta variant of COVID-19. No, it’s not the wildfire smoke caused by California’s forests getting too close and cuddly with PG&E’s century-old electrical infrastructure settling into nearly every valley in the western United States. All right, yes, those are both problems, too — serious, lethal problems doing untold destruction to life and property — but let’s not get distracted from what’s important here: There are tourists from Southern California who want to visit Southern Nevada and, if they leave either their homes or Clark County at the wrong time, they will have to drive through 113 miles of slow moving bumper-to-bumper traffic.

I’m serious! Really, I mean that! Sorry if it sounded sarcastic.

Yes, it’s true that Clark County, like everywhere else in the country, is facing more immediate problems at the moment. However, COVID-19 isn’t anywhere near lethal enough to end human life as we know it nor are the wildfires in Northern California likely to burn The Strip to the ground. Consequently, for better or worse, there is almost certainly going to be a tomorrow for Clark County’s tourists and the businesses and workers who serve them. Considering how long it takes to build anything these days — it took 19 years, not including the four decades of wishcasting which preceded most of the planning and construction, just to build a 35 mile freeway from Reno to Carson City — it’s probably a good idea to start thinking about some of these issues now instead of putting them off until later.

There are, however, a number of problems with that solution.

The first and most obvious problem, as anyone who’s had the misfortune of driving on Interstate 5 through the Central Valley can attest, is California has a long list of freeways and highways in need of extra capacity, and many of them aren’t just pushed past capacity on Friday nights and Sunday afternoons. For example, according to the 2019 Caltrans traffic census, the peak monthly average daily traffic for Interstate 5 between Tracy and Kettleman City (a roughly 140-mile-long four-lane stretch of Interstate 5) is nearly identical to that experienced by Interstate 15 between Barstow and Primm, with over 50,000 vehicles each day traveling on both freeways. The difference, however, is that 30 percent of Interstate 5’s traffic is truck traffic, compared to less than 20 percent of Interstate 15’s traffic. Not only are trucks considerably longer and heavier than passenger cars, the goods they carry are worth more than any car full of tourists who are too cheap to fly.

Consequently, if California is going to add a lane to any 100-plus mile stretch of four-lane freeway, Interstate 5, not Interstate 15, is going to be higher on our neighboring state’s priority list.

A second and more fundamental problem, however, is California does not have the political will to add capacity to most of its freeways. The problem, in California’s case, is both financial and philosophical. Financially, California has struggled to pay for maintenance of its existing roads for decades, and additional capacity means additional demands on an already tapped out road maintenance budget. Philosophically, meanwhile, many Californians, raised in intractable bumper-to-bumper traffic through much of their lives, would rather see their state spend less money on highway capacity and more money on mass transit — the idea being that, if Californians are going to wait in line to get to their destinations regardless, they might as well wait in an environmentally friendly train terminal instead of an idling car.

Supporting California’s philosophical logic, at least to a point, is the concept of induced demand. In many situations, adding additional lanes paradoxically creates additional congestion since people preferentially use newly expanded highway capacity instead of timing their trips to avoid predictable traffic congestion or switching to other modes of transportation, like buses, trains, planes, bikes, or walking. In fact, traffic planners have observed on several occasions that reducing road capacity actually reduces congestion by nudging people towards avoiding roads and preferring other transportation options.

Though it is probably technically possible to build an 8.5 mile wide freeway (I’m not a civil engineer, so please don’t hold me to that), it is in no way practical nor desirable to do so. The resulting freeway would consume too much land, too much concrete, too much steel, and would be utterly impossible to navigate (good luck getting to your exit from the far left lane in any reasonable hurry).

This is why traffic engineers point out, time and again, that, after a certain point, we can’t build our way out of traffic congestion through increased highway capacity. Eventually, you reach a point of diminishing returns where the costs incurred — financially, environmentally, and even politically when planners use eminent domain to seize the real estate additional lanes require — aren’t worth the benefits. Consequently, before that point is reached, it’s important to develop other, less expensive (both in money and real estate) modes of transportation between destinations. To do so, however, those alternative modes of transportation need space in the market to succeed, which means people need to actually prefer them over getting in their car and driving on free, taxpayer-funded roads. To make that happen, taking the highway needs to be less convenient than using other, more space-efficient modes of transportation.

Of course, if the logic of induced demand was truly universal, there would be bumper to bumper traffic on the four lanes of Interstate 80 between Fernley and Wendover in Northern Nevada, and adding a lane in each direction would lead to permanent gridlock. As anyone who’s ever driven that stretch of freeway can tell you (and I’ve done so at least 100 times), this is obviously nonsense on stilts. Demand for highway capacity is, indeed, demonstrably finite, as anyone who’s ever driven through rural Nevada can attest, and demand for travel to the region more generally is insufficient to support more than, perhaps, a daily train stop or a federally subsidized weekly visit. In the context of rural Nevada, then, existing highway infrastructure isn’t crowding out other, better transportation alternatives — it’s providing convenient transportation infrastructure where little to none would otherwise exist.

Having acknowledged that Great Basin-sized corner case, there are roughly 20 million people living in or near Los Angeles and San Diego, over 2 million people living in Clark County, and clearly no shortage of demand for travel between the two. The Mojave Desert itself might be largely depopulated but that’s where the similarities between Interstate 15 and Interstate 80 end. Consequently, it’s no surprise a lot of people are wondering if adding an additional lane would just forestall the inevitable, adding another lane’s worth of maintenance costs to California’s already limited road budget for no meaningful improvement to travel times. Alternatively, if an extra lane actually did improve travel times, additional highway capacity might crowd out the development of other, more space-efficient transportation options, like the oft-promised and constantly delayed high speed rail line between Southern California and Clark County.

Interestingly, travelers from California to Reno have more modes of transportation to choose from than the considerably more numerous travelers from California to Las Vegas do. Amtrak has provided train service, one way or another, to Reno since its creation in 1971. There is also no shortage of air and bus service, and, due both to the steepness of Donner Pass and the need to support access to resorts on the north shore of Lake Tahoe, there are even more lanes on most portions of Interstate 80 between Auburn and Reno than there are between Barstow and Primm. It’s even theoretically possible to hike or bike through the Sierras by taking Foresthill Road to Truckee, then taking the Tahoe-Pyramid Trail the rest of the way to Reno.

Consequently, adding additional capacity to Interstate 80 would very well compete against Amtrak and regional air service at taxpayer expense, which means the logic of induced demand does, indeed, hold in Northern Nevada. Taking the logic one step further, it might even justify expanding rail service to Lake Tahoe, which is currently at its limits of accommodating automotive traffic and would strongly benefit from more space-efficient transportation options.

By contrast, adding additional capacity to Interstate 15 likely won’t compete against train transportation because it doesn’t exist — passenger trains haven’t served Las Vegas since Amtrak’s Desert Wind route was decommissioned in 1997, though Biden’s latest infrastructure bill may restore service within the next year or two. As for air service, it’s already approaching the limits of what Southern California’s and Clark County’s airports can currently support, and any likely increases to Clark County’s airport capacity are decades away, if they ever happen. As for buses, they get stuck in the same traffic as everyone else. Even if someone could walk or bike from Barstow to Las Vegas without traveling next to the interstate, it’s hard to imagine anyone actually wanting to.

Consequently, yes, adding a lane might make future high-speed rail projects marginally less viable, but before anyone weeps for Brightline’s future profit margins, perhaps it should actually lay some track first. If the California High-Speed Rail project is any indication, it might be decades before Brightline is able to acquire the necessary rights-of-way, clear California’s notoriously laborious and NIMBY-privileging environmental review process, and start construction — assuming they can raise the money to get started, a task they’ve delayed at least twice now.

In the meantime, tourists will remain stuck in traffic, waiting.

California’s traffic engineers have a point. Induced demand created by increased highway capacity is real, it’s expensive, and it’s frustrating to everyone involved — drivers, taxpayers, and policy makers alike. However, if the logic of induced demand precludes further investments in overtaxed highway infrastructure, then other investments must be made possible and must be able to deliver results in less than a generation. If the example California is setting with its current high speed rail projects is any indication, however, Las Vegas won’t see a single bullet train until sometime after either Donald Trump’s or Bill Clinton’s grand-child is elected to the White House — assuming it doesn’t stop in Primm instead because the project ran out of money.

Consequently, Southern Nevadans and Southern Californians have two choices: They can either wait patiently for California’s sclerotic political and bureaucratic processes to allow high speed rail to be built, preferably within a human lifetime and preferably for less money than it would cost to buy a Fortune 500 company outright, or they can lobby for the easy and comparatively inexpensive solution of simply adding another lane to Interstate 15. Granted, Caltrans probably won’t build any lanes, either, but at least there’s a chance they might, especially if someone else opens their checkbook.

Considering the choices, it’s no wonder that even progressive darling Tick Segerblom is asking for an additional lane instead of holding his breath and waiting for a greener option.