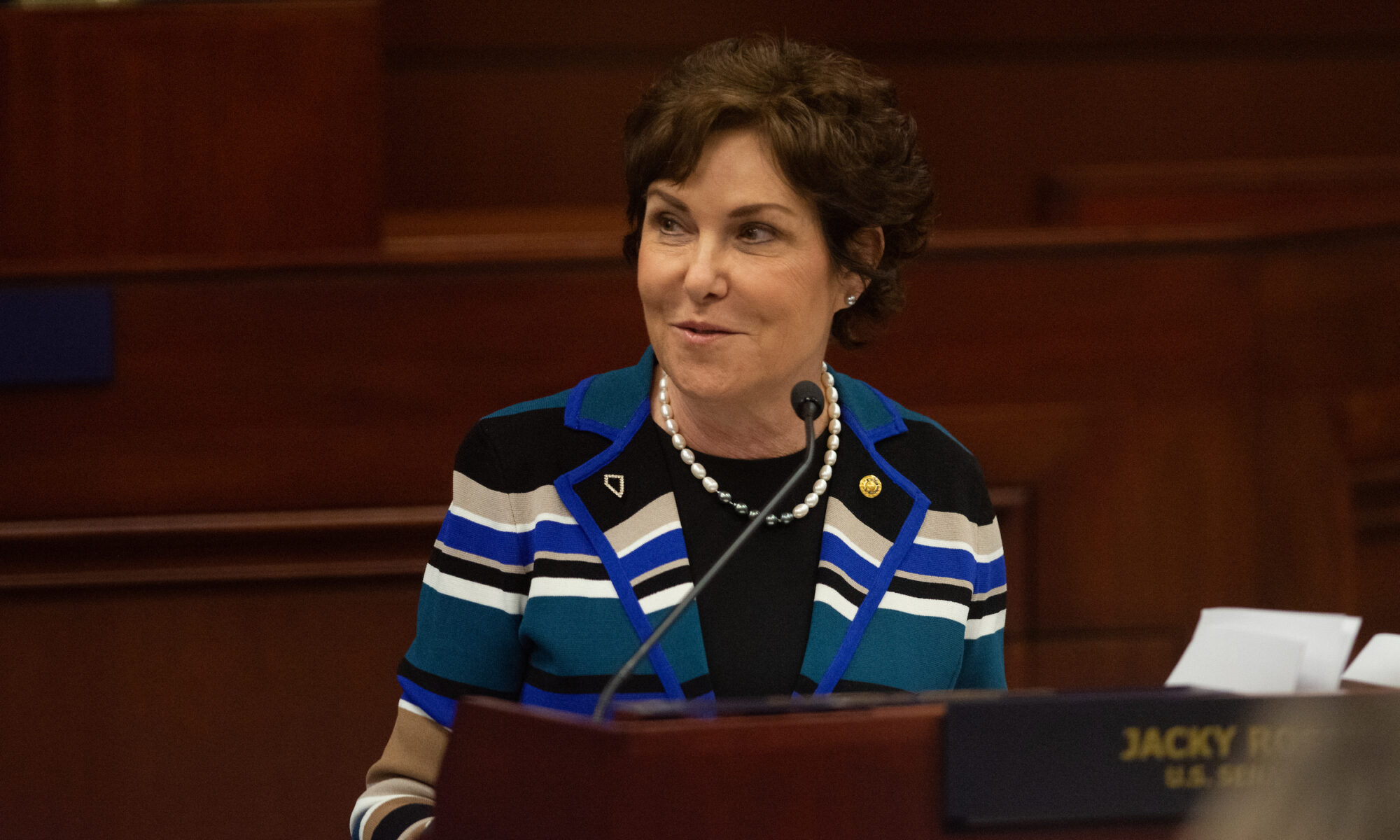 It was on a congressional trip to France in June to mark the 75th anniversary of the D-Day invasion that Democratic Sen. Jacky Rosen first befriended Republican Sen. John Barrasso.

She and her husband were on a plane next to Barrasso and his wife when the discussion turned to Rosen’s broken wrist, an injury she had recently sustained during a parade in Las Vegas. Barrasso is an orthopedic surgeon and Rosen’s husband is a radiologist, so the couples spent time discussing her break and the recently broken bone of another senator.

“I would not recommend breaking your wrist to break the ice,” Rosen said in an interview.

Her acquaintance with Barrasso is just one example of how Rosen has carved out a niche for herself by building personal relationships in a chamber where seniority and affiliation with the majority party are usually the predominant predictors of success. When she began the first year of her six-year Senate term in January 2019, Rosen, a big believer in working across the aisle after serving two years in the House, resolved to meet with all 53 of her Republican colleagues. One year into her tenure, Rosen’s strategy is showing signs of bearing fruit.

She even managed to get a bill signed into law — quite a feat given that of the 3,703 bills and resolutions introduced in the chamber in 2019, only 30 became law. That’s less than one percent of the Senate legislation.

“As a former computer programmer, I introduced this bipartisan bill to help break down the gender barriers that I faced as a woman in STEM for current and future generations,” she said in a release after the bill received Trump’s signature.

It is one example of how Rosen has adopted a policy of trying to find a Republican partner for the bills she seeks to introduce. Rosen was ranked the third most bipartisan Senate freshman in the first half of 2019 by public-affairs data and analytics firm Quorum.

“You just find those places to work together,” Rosen said in a recent interview. “And then when you do have policy disagreements, that's okay too. That's how we move things forward.”

She cited infrastructure, STEM education, veterans issues and the military as “neither Democrat or Republican,” and thus areas where bipartisan progress can be made.

Rosen started by meeting leaders of the committees on which she serves and has since moved on to connecting with other GOP members. She acknowledged that she may not have the chance to meet one-on-one with everyone, though; she has only exchanged pleasantries with Senate Majority Leader Mitch McConnell on the floor.

“I haven't had an opportunity to do that,” Rosen said when asked about meeting with McConnell. “The leaders are very busy. The leadership doesn't sit on committees... And so I'm trying to work with people that I know I can find.”

The long flight to France presented Rosen with an opportunity to get to know Barrasso, who, as GOP conference chair, is a member of the Senate Republican leadership. Since the trip, the two have become friends and teamed up in July to launch the Senate Comprehensive Care Caucus, which promotes the availability and benefits of palliative care, a specialized type of medical care focused on providing relief from the symptoms and stress of a serious illness to improve quality of life for both the patient and the family.

She also worked with Barrasso on her bill to provide new military recruits with up to 270 days to pick their preferred GI Bill benefits plan, instead of having to do so upon arrival at basic training, an intense period of training not conducive to making momentous educational decisions, in Rosen’s view.

“It’s good for me to partner with her,” Barrasso said when asked about the relationship with Rosen. “There are lots of areas where we have common concerns and interests.”

And while the two like to emphasize where they agree, there are issues on which they do not, including building a national nuclear waste repository at Yucca Mountain. Barrasso, who is the chairman of the Environment and Public Works Committee, in May introduced a bill to restart the licensing process for the project, something Rosen and most Nevada politicians have pledged to keep from ever being built.

Asked if Yucca ever comes up when the two senators talk, Barrasso said, “occasionally.”

“We don’t agree on everything,” he added.

The Senate is known for unlikely bipartisan friendships, including those between the late Sen. Ted Kennedy, a Massachusetts Democrat and conservative Republican Sen. Orrin Hatch of Utah, as well as between Sen. John Kerry, also a Massachusetts Democrat, a Vietnam veteran who made a name for himself protesting the war, and the late Republican Sen. John McCain, of Arizona who was a Vietnam war hero. But Rosen has cultivated several within the Republican conference, including with Sen. Mitt Romney of Utah, Sen. James Lankford of Oklahoma and Sen. Bill Cassidy of Louisiana.

“She's willing to work on things she cares about without worrying about who gets credit and which party likes it most,” Romney, the 2012 Republican presidential nominee, said of Rosen. “We need more like her.”

Romney, who was elected the same year as Rosen and whose office is located close to hers, said he has reached out to the Nevada Democrat to work on his bill to create congressional committees specifically tasked to develop legislation to restore and strengthen endangered federal trust funds, like Social Security and Medicare, which are estimated to be exhausted in the next two decades.

“The freshman class always bonds together because you're the new kids,” Rosen said of her relationship with Romney, adding that he is somewhat of a kindred spirit in “looking for common ground.”

The two also serve on three committees together: the Health, Education, Labor and Pensions Committee, the Small Business and Entrepreneurship Committee and the Homeland Security and Governmental Affairs Committee.

Lankford, who characterizes himself as a faithful conservative, said he first met Rosen when the rabbi he invited to the annual National Prayer Breakfast, which he hosted in February 2019 along with Democratic Sen. Chris Coons of Delaware, had to cancel at the last minute. Coons knew that Rosen was president of Congregation Ner Tamid in Henderson, the largest Reform synagogue in Nevada, and he and Lankford asked her to speak in his rabbi’s stead.

“I did fill in; it was a really tremendous experience,” Rosen said. “And from that...a friendship was formed.”

Both Lankford and Rosen serve on the homeland security committee and in October launched the Senate Bipartisan Task Force for Combating Anti-Semitism.

“As members of Congress, our responsibility to our neighbors, to our friends, to our community, and to our children is to work together in a bipartisan way to prevent anti-Semitism before it starts — to educate, to explain, and to empower,” the two wrote in a joint op-ed on CNN’s website.

As for Cassidy, who has voted with Trump 92 percent of the time since coming to Congress and who also sits on the health committee, Rosen has been working with him on a bill to prevent data mining of personal health information stored on wearable personal devices, such as smartwatches.

She spearheaded 15 measures in 2019, including legislation to proactively inform veterans about the home-loan options available through the Veterans Administration; to expand a tax credit to encourage businesses to hire student veterans; and to require that all communities receiving federal broadband aid have access to internet service that is actually delivered at broadband speeds.

Even so, the road to holding Senate power is likely to be a long one. Rosen is the junior member of a delegation that has only recently begun to rebuild its seniority in the Senate following the retirement in 2017 of Sen. Harry Reid, a Democrat who served as majority leader, the top leadership post in the chamber. Rosen is ranked 96th in seniority.

Seniority in the chamber is key to advocating for the state against competing priorities of other senators. For example, despite its best efforts, the Nevada delegation failed to preserve a generous tax credit for residential and commercial solar projects.

The credit dropped from 30 percent in 2019 to 26 percent in 2020 and will phase out completely in 2022 for residential users, plateauing at 10 percent for commercial users. More than 6,600 Nevadans worked in the solar industry as of fall 2019, according to the Solar Energy Industries Association.

Despite the absence of Reid and being low woman on the Senate seniority totem pole, Rosen helped the delegation fend off efforts to fund Yucca Mountain. In May, she testified before the Environment and Public Works Committee arguing against the project and in March introduced legislation that would forbid moving forward on the repository until the White House Office of Management and Budget conducts a study that is submitted to Congress on the economic benefits of alternative uses of the Yucca site, and after Congress holds a hearing on the benefits of alternative uses.

She touted the lack of funding in a release highlighting passage of a package of annual appropriations bills last month.

“I’m glad to see both Democrats and Republicans come to the table with a bipartisan deal that does not fund Yucca Mountain,” she said.

Another area of likely disagreement with her GOP colleagues is on Trump’s impending impeachment trial.

McConnell has said he intends to work with the White House Counsel’s office as Republicans negotiate with Democrats on whether to call witnesses and other procedures.

Rosen said she intends to be impartial and look at the evidence before making any decisions.

“I think that we have solemn jobs as senators,” Rosen said. “Anyone who's elected to uphold, protect, defend the constitution, we take an oath we have to take that seriously without regard to our personal feelings, gain, whatever somebody else might think. So I think we have to sit there and that chamber here was presented to us, research it and have an open mind and do our constitutional duty.”