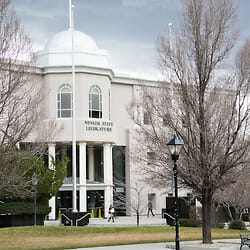 The 79th session of the Nevada legislature has begun. For 120 days, senators, assemblymen and assemblywomen will work on initiatives that could become the new laws for the Nevada community.

The Nevada Independent - En Espanol will be publishing a series of interviews with Latino leaders who hold leadership positions at the State Assembly and Senate. These Q&A pieces will focus on their respective backgrounds, challenges, and points of view regarding several current issues, as well as how they rank the Hispanic community in importance in terms of their work agenda.

We will be providing English translations of those interviews, beginning with this first interview in the series.

Question (Q): What is the Nevada Hispanic Legislative Caucus? What is its purpose and what is the relationship among its members?

Answer (A): We are lawmakers, mostly with a Hispanic or Latino background. Not all caucus members are of Hispanic descent; however, what essentially unites us as a caucus, is that we have the same mission to represent the Latino community at a legislative level.

What do I mean by this? Sometimes we deal with laws or bills and, well, before I came along in 2011, I thought that the Latino community was not present in the minds of many lawmakers. I didn’t think they understood the impact of certain decisions being made or certain measures being taken or even what implications could be for the Latino sector.

Before 2011, we were only represented by two latinos and now in 2017 we have grown to a caucus of 11 (9 of Latino descent). So, our mission is to make sure they consider the fact that there is a growing Latino community throughout the entire state.  We account for almost a third of the population, and as such we also have certain needs and we must advocate, inform and educate all other legislators about this facet.

Q: Do you think that there is a sufficient representation of Hispanic leaders at the Assembly and the Senate?

A: If we do the math, we still need to grow in numbers. If we held a third of the Assembly, of a total of 42 representatives, then this would correspond to nearly 13 Latinos in the Assembly. At the moment, there are only seven of us that are of Latino descent, along with a colleague (Assemblywoman Dina Neal) who stands beside us on all Latino community needs.

On the other hand, in the Senate, where there are a total of 21 senators, I think we have seven lawmakers that are of Latino descent in the Senate and only two of these are ours. So, we still need to grow in terms of representation, but, for those of us that are here, we're doing the best we can.

We try to ensure that the bills are not only in favor of the Latino community, but to also remove those that play against us. Year after year we have found ourselves facing a bill to make English the official language of the state. Another bill would have us show our IDs when voting. A third example is the use of the E-verify system when people are hired for any job. There are others that carry a little more of an anti-immigrant tone and, consequently, we have tried to ensure that these bills do not move forward or to negotiate to such an extent that they have no real impact.

One thing we have been able to do, thanks to the leadership of Senator Denis, was to have the first Latino to represent us at a state level. He achieved the role of majority leader in 2013, and thanks to his leadership during that year, we were able to implement many measures that favor our community, such as driver authorization cards, the allocation of funds for English learners in our state and enhanced measures to favor our people.

Q: How did you go from being a teacher to serving on the Assembly? How did you get into politics? From what I have read, it is a field that you are really passionate about, of which you have devoted much of your life.

A: I’m passionate about trying to do my best to educate future generations, to ensure they have good opportunities because I know I am here as an official elected by the people. I was given the privilege of attending a public school, where I had teachers who encouraged me to always do the best I could and to further my education.

I think one must reciprocate. I am who I am and I am where I am thanks to those who had each contributed their part. To put quite simply, my role as a teacher was also what I wanted to do.

Although our population has grown in Southern Nevada, there are not many Latino teachers to be seen. We are not graduating at the same levels or in the same proportions as other racial groups. Back then, every time I saw my then legislator, Ruben Kihuen, now congressman, I would say: “Hey Ruben, what are you doing to help us teachers help our students?” And I think he got so annoyed with my pleas that he turned to me and said, “Now, it's your turn, partner.” He said that I should consider being involved politically because I had the passion and I would do a good job at representing the community.

My family also agreed that I should, after I talked with them. Their support is essential for the role because we need to be here for 120 days and I have to leave behind my husband and children. The family comes first and then our work for the good of everyone can be done.

Q: Are you happy or satisfied with the appointments you have been given on various committees? Would you have preferred to be on others?

A: You know, I have always been a team player. I think being a legislator is not my own job, but rather a team effort. This is especially so in the Assembly, as there are 42 members and are 42 votes. You have to have the approval of the majority. Nobody does anything for themselves or alone.

I have said to my former and current leaders, “Put me where you think I can do the best for the team, for our state, for our people. Where you feel that I could improve the outcome or my legislative work, put me right there.”

I've never renounced any appointment. I've been on several committees. What I have never backed down from is education. I've always been on that committee.

There are so many things to learn and understand. After 120 days we do not become experts and, even during this fourth session, I still do not feel I know everything. I'm still growing and learning.

Q: You are from Nevada and you have seen how everything has changed. I’m referring to one of the most recent changes that has just now sparked a lot of conversation, about the building of a stadium for the Raiders team. You voted against it being built. Was it difficult for you to make that decision or did you feel pressure?

A: It is never easy to say no. I even have a hard time saying no to my six-year-old, but I think we are given these seats to consider these bills and to see if they are good or not for the people we are representing.

In my district, we lack many things.  There are many needs, and when I started reading more about the bill for the stadium and began to research more on putting public money aside for a stadium was a now a thing of the past.  We never got the paperwork that actually told us that “this is going to fill the coffers, these are the benefits of having a stadium, this is going to increase the level of tourism in the city, if all stadium seat tickets are sold, then...” Everything is hypothetical. I was not going to take the money that we need for many other projects that benefit our people because there was nothing solid or concrete.

So, in my personal opinion, we should spend more of such money on other ways that make us grow strongly; for example, quality education and health services should come before a private project that is only going to benefit the pockets of the investors.

Q: What are your priorities for the Hispanic community during this session?

A: We are going to be very observant of what is happening at the federal level, now on the defensive, so as to implement measures to protect our community. We need to be very aware to take actions at the state level, so as to protect people’s information and to advocate for quality education even though we know that there is still a long road ahead.

We also have several bills that we will be supporting concerning criminal justice reforms because we know that most of those who are in prison are minorities, and we know the impact when coming out of prison. We will analyze our system and see if it is really a fair one. We are doing what we can to rehabilitate people, so that when they come out they become productive citizens and don’t continue committing crimes. Not only do we have to be smarter, but we also need to be compassionate for these people.

Obviously, there is also the economy and we need to ensure that there is smooth sailing ahead of us. We need people’s wages to increase, while maintaining the same level of inflation. Everything keeps going up, but sometimes wages stagnate, so how can we ensure that the people of Nevada earn enough to be a part of the middle class? We can’t become like some other countries, where the middle class virtually no longer exists.

This article was updated at 11:42 a.m. on February 16, 2017 to add information from Assemblywoman Olivia Diaz about the current number of representatives in the Hispanic Legislative Caucus of Nevada.