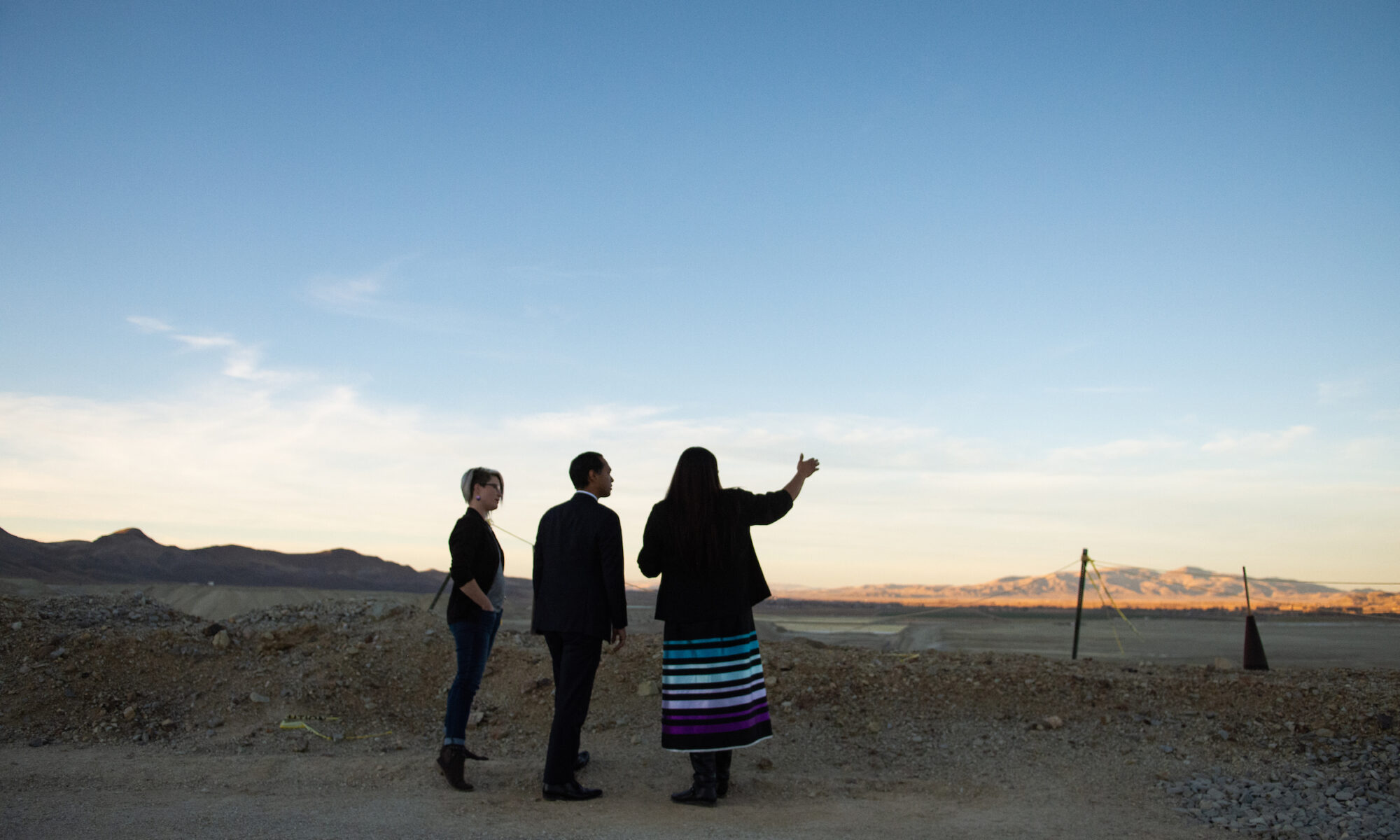 If you want to receive this newsletter in your inbox, sign-up here.

“Our voices are like a little squeak.” That is what a Yerington Paiute tribal elder told former Housing Secretary Julián Castro, the first presidential candidate to visit the Anaconda Copper Mine, during a roundtable on Monday.

Legacy practices at the mine polluted groundwater with arsenic and uranium, forming a plume that has travelled below homes and toward the Yerington Paiute Tribe’s reservation. It has taken years for state and federal regulators to start closing the mine and address the contamination.

Last year, the Trump administration shifted oversight of the clean up from the EPA to state regulators in a deal that deferred putting the site on a Superfund list. The state has argued that the deferral deal will allow it to conduct a faster and less expensive cleanup. But mining watchdogs and environmental groups have been concerned that the decision could short-cut the process while leaving the state with fewer legal and financial tools to fix the contamination.

Castro’s visit on Monday highlighted an issue that few candidates have raised in a campaign season that has featured several environmental issues. In a roundtable with tribal elders and representatives of the Walker River Paiute Tribe, the former San Antonio mayor said as president, he would require consent from tribes on projects, including clean-ups, that affect culturally significant land. After the discussion, Castro toured the mine site near Yerington.

“It makes it real to come out here and see it,” Castro said after seeing where mining activity left abandoned materials. “The thing that has impressed itself most in my mind is the fact that these communities have to live with the consequences of contamination for thousands of years.”

The federal government has not always lived up to its “obligation” to tribes, Castro added. Now the tribes must work with the state as the lead agency charged with cleaning up the 3,600-acre mine site.

A new state law could give tribes a greater voice in government by codifying consultation with state agencies. The purpose of the bill was to ensure a greater voice for sovereign nations in state government, which does not have the same responsibility as the federal government.

In the past, state and federal governments have often overlooked tribes. That story does not end near Yerington — or in Nevada. In cases throughout the West, indigenous communities still face access barriers when it comes to water infrastructure that most Americans take for granted.

On the same day as Castro's visit, NPR reported that more than two million Americans go without running water or indoor plumbing, an issue disproportionately affecting indigenous communities. The finding, from a new report, found that “race is the strongest predictor of water and sanitation access.”

Here’s what else I’m watching:

Coal goes offline: Southern Nevada is officially off of coal. On Monday, an Arizona utility shut down the West’s largest coal plant, partially owned by NV Energy. Shuttering the Navajo Generating Station was a long multi-year process with an unsavory history that has created a complicated future for the Navajo and Hopi tribes, which will now have to replace significant gaps in revenue, as the Arizona Republic reported earlier this week. Big questions about environmental justice, water rights and reclamation will persist at this plant for a long time, as explored more in this Twitter thread.

Recreation gets an office: Outdoor recreation in Nevada does not always get a lot of airtime, but industry estimates suggest that it accounts for 87,000 direct jobs with consumers spending about $12.6 billion here on everything from fishing and climbing to skiing and biking. Last year, the Legislature approved the creation of a state-led outdoor recreation office, following the lead of several other Western states. On Monday, it got its first leader. Assemblywoman Heidi Swank will leave the Legislature to run the Division of Outdoor Recreation, housed in the Department of Conservation and Natural Resources. The office is also expected to advocate for conservation. Swank’s departure creates a vacancy for chairing the Assembly Committee on Natural Resources, Agriculture and Mining.

Dixie Valley toad: The Center for Biological Diversity wants the Endangered Species Act to protect a newly-discovered Northern Nevada toad, endemic to an area targeted for geothermal power. The conservation group’s 60-day notice of intent to sue the Department of Interior also seeks to protect 20 springsnail species in Nevada and a threatened fish in Elko County.

Litigation matters: Last week, the Southern Nevada Water Authority and opponents of the Las Vegas pipeline met again before a familiar judge in Ely. The court battle — destined to go back to the Supreme Court — centered around the water authority’s controversial and long-deferred proposal to ship rural groundwater from Eastern Nevada to Las Vegas, supplementing its paltry Colorado River supply (thanks to the 1928 Boulder Canyon Project Act). Tribes, ranchers, two Utah counties and environmentalists have argued that the project would have a degrading effect on ecosystems, depleting underground water supplies that support springs, wildlife and grazing. The Reno Gazette Journal did a powerful story on protecting sacred swamp cedars. The water authority, looking at an increasing population, has touted a mitigation plan and said that it wants to keep its options open, noting that it could be decades before the water project is needed. Its board will vote Thursday on a 50-year water resource plan that includes the pipeline project.

Why it matters: The case, an appeal of the state’s most recent regulatory ruling, is before the same District Court judge who heard the matter six years ago. The Supreme Court, at some point, will likely have to make the final call on the project. But the fundamental questions at play — about what constitutes appropriate water use and mitigation — have significant implications for other projects (and there are several) throughout the state. Colton Lochhead, for the Review-Journal, did a great job of capturing that. Quotes from lawyers on both sides could apply in many ongoing water cases.

To build or not to build: All of this gets to a million-dollar question (quite literally) that does not have a clear-cut answer (sorry). What does the future of Western water management look like in a region where climate change is expected to make precipitation more variable? Is it a future like the 20th Century, with the construction of diversions and conveyances to support cities and agriculture? Or is it negotiated with less tangible tools (ex. conservation) within the existing system? Or both? In basins such as the Colorado River, negotiation and conservation have proven to be useful tools for creating flexibility that can be achieved on a quick timeline. It takes much longer to entitle and build large-scale infrastructure, which can have significant environmental effects on broad ecosystems.

But the optics: Given that, spending $30 million on water conservation over a decade might not be all that crazy.  From a water management perspective, studies suggest that talking about water can help reduce use (see: this study, which justifies my job). Reducing water use can save money over time. But when paying that money to the Raiders (whose stadium is partially funded by $750 million in hotel room taxes), there’s more to unpack. Last week, my colleague Riley Snyder reported that the water authority’s board planned to vote today on a 10-year, $30 million marketing contract with the Raiders in an effort to boost conservation. But the optics of paying the team ratepayer funds after the state’s subsidy to the team and the water authority recently extending a sales tax… are pretty awful. On Tuesday, the water authority told Riley that it would punt (no pun intended), asking its Citizen Advisory Board to first weigh in on the issue.

Change in Clark’s land bill: Amid concerns that a proposed Clark County Lands Bill could enable the pipeline, the county revised a draft bill to explicitly exclude the project. Environmental groups still have concerns about the proposed legislation, arguing that it does not have enough conservation and species protections to offset new sprawl.

Coming up: The Washoe County Lands Bill is back.

After renewable standards: Our energy reporter, Riley Snyder, wrote about how stronger clean energy requirements for utilities might fall short of the state’s emission reduction goals under a plan to match the goals of the Paris Climate Agreement. Those findings, from a draft report presented in a meeting last Friday, is another signal that state officials plan to focus on emissions in other sectors, not just electricity generation. Read his story for more details.

In the new story, we looked at a 2001 document. It details, among other things, how the public board (with different members at the time) delegated non-statutory responsibilities to the private developer-controlled company.

The water district is taking steps to reform its governance, but the arrangement still raises questions about the blurring of government and business. We’ll have more on that soon.