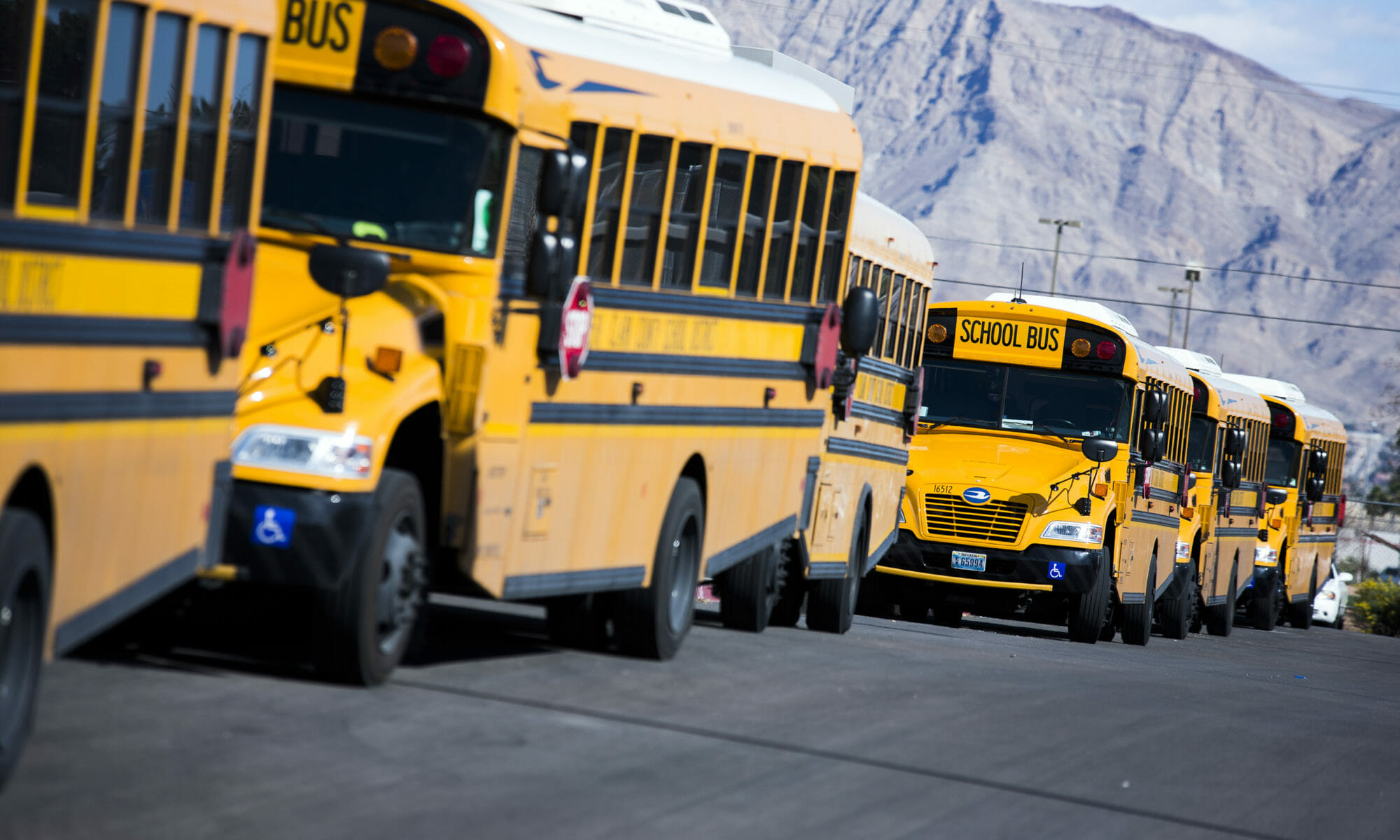 In the years since the first one opened in Minnesota in 1992, charter schools have blossomed into a national movement that now includes more than 6,700 schools and 2.9 million students. They’re driven by people who want to throw off the strictures of traditional public schools and try innovative teaching strategies while still maintaining a backbone of public funding.

Charter school proponents point to rapid improvement in places like New Orleans, which laid off thousands of teachers in its failing public schools in the wake of Hurricane Katrina and started anew with a nearly all-charter school portfolio. The model can offer freedom from union contracts, ease of hiring and firing and local governance that gives the flexibility for potentially transformative change in persistently failing schools.

Nevada hopes it can turn around some of its lowest-performing traditional schools by converting them to the charter model. President Donald Trump and new U.S. Secretary of Education Betsy DeVos have championed charter schools as a way to liberate students from the struggling schools they’re zoned into.

But skeptics wonder whether charters are the panacea some proponents make them out to be. Groups like the National Education Association teachers union say they divert resources from traditional public schools, skirt transparency and conflict of interest rules and are vulnerable to unprofessional financial management.

Sometimes they’re managed by for-profit companies that see them as a business investment, and sometimes they sprout and wither away in a matter of years because of low enrollment or bad budgeting.

Even in Nevada, the charter school model is far from an unqualified success, although it still holds a prominent place in the state’s strategy to rise up from the bottom of education rankings. The Nevada Independent gets you up to speed on how charter schools work and what’s in store for them going forward:

What is a charter school?

What’s the history of charter schools in Nevada?

Nevada lawmakers passed a bill in 1997 that allowed charter schools. While local school boards, the Nevada System of Higher Education and the Nevada Department of Education have long been authorized to sponsor charters, lawmakers created the State Public Charter School Authority in 2011. That entity can sponsor its own charters, but also serves as a model for best practices at charter schools.

Who can attend charter schools?

Charter schools are free and open to any student in the state. Aside from a small number of charter schools that serve at-risk populations, charter schools have to accept every student — including a child with special needs — who applies as long as he or she is in a grade level offered by the school, Gavin said. If there are more applicants than available spaces, the school conducts a lottery to award the positions.

Lotteries happen frequently, and some charter schools have thousands of students on waitlists, Gavin said.

How many charter schools does Nevada have?

There were 41 charter schools operating in Nevada during the 2014-2015 school year. Local school boards sponsored 16 schools, and the SPCSA sponsored the remaining 25 schools. The charter schools educate about 38,000 students in Nevada, which effectively makes it Nevada’s third largest public school system. Clark County has the largest school district in the state, followed by Washoe County.

It is also the state’s fastest-growing “district” — enrollment at charter schools is up from about 7,000 students in the 2008-2009 school year — and by 2019 is projected to surpass the population of the Washoe County School District, which has just shy of 64,000 students this year.

In the 2011-2012 school year, 4.2 percent of Nevada’s students were attending a public charter school. That rate is the same as the national average, but far lower than some of its neighbors in the West. In Arizona, 12.6 percent of students attended public charters schools, and in Colorado, that figure was 9.8 percent.

Critics say Nevada’s charter schools are too concentrated in affluent, suburban parts of the state and contend they’re contributing to a “resegregation.” That’s part of the reason the Legislature authorized $10 million in 2015 to create a “charter harbormaster” that would recruit management companies to bring charter schools to needier areas.

How many charter schools have been shut down in the state?

Eleven charter schools have closed over the years, according to the Nevada Department of Education. Some closed voluntarily because they had low enrollment, while others had their charters revoked for financial mismanagement, lack or insurance or other administrative problems.

A critical accountability element for the charters are contracts that include performance measures for student proficiency, attendance and re-enrollment rates, graduation rates and financial and governance outcomes.

While the threat of a school shutdown can be a traumatic experience, proponents say a moderate rate of closure indicates the system is working and unsuccessful schools are being phased out — something that’s rare for traditional public schools.

What types of charter schools exist?

Charters aim to give parents more options within the public school sector. Some offer all-online curriculum to accommodate students who live in remote areas or are holding down a job during high school to support their family. Others offer the Montessori education method, which encourages free-form exploration among students and is an in-demand, expensive offering when provided through a private school.

Each charter tends to have its own educational philosophy, and some offer specialized focuses such as STEM (science, technology, engineering and mathematics), early college and international baccalaureate programs.

“Some are very traditional, desks in rows,” Gavin said. “Others are much more progressive.”

How are they funded?

Students don’t pay tuition to attend charter schools, which are funded by per-pupil dollars granted to each child from the state’s Distributive School Account. Essentially, the state dollars follow the student to the charter school, which may also receive federal funding. Nevada charter schools are expected to receive roughly $242 million worth of DSA per-pupil funding this year, Gavin said.

Charter schools don’t get facilities funding, though — they must pay for that out of their own operating funds. And building a school from scratch is expensive: The newest elementary schools going up in Clark County have a price tag of $24 million to $29 million.

Because most charter schools don’t have that kind of up-front cash, it’s common to see a charter school operating at a strip mall or in a closed-down Wal-Mart.

School districts are obligated to share state and federal money with charter schools, such as funding for special education students, on a proportional basis. Charter schools can also received Title I federal funding that supports schools in low-income areas.

But charter schools don’t receive some other types of funding, including class size reduction money.

How are charters governed?

Some schools also contract with a management organization — an entity that deals with two or more charter schools and handles administrative operations such as payroll and insurance. In some cases, they handle broader work such as hiring, professional development and advocacy.

All state charter schools must be nonprofit governmental entities by law, Gavin said. If a charter school contracts a vendor to provide a certain subset of services, such as professional development or financial management, the vendor can be a for-profit or nonprofit organization.

Management organizations can increase the professionalism of a charter school and allow teachers and administrators to focus more on their core academic tasks. They also create economies of scale with their multi-school portfolios, and help replicate successful charter school models broadly.

If it were its own district, the State Public Charter School Authority would be the lowest-performing in the state with a graduation rate of 59 percent. Part of that is driven by very low graduation rates at a handful of the schools, particularly the large, online charter schools. Defenders of those schools say they’re embracing severely credit-deficient students who are unlikely to graduate anyway because of troubles at their prior schools, and those students bog down their overall rankings.

Lawmakers passed a bill in 2015 that let the Authority close down persistently underperforming charters, defining that in part as having a graduation rate lower than 60 percent. The state has considered shutting them down, but the online schools are fighting back against that.

Research from Stanford University in 2013 shows that students in charter schools barely outperform their counterparts from traditional public schools on standardized tests. But it noted vast differences in performance from state to state and school to school.

Nevada has been working to improve its charter school rules to improve performance and ensure good management; national organizations have taken note in recent years and ranked the state high for best practices. Charter school advocates acknowledge that they need to get their own house in order if they’re to be an example to traditional public schools, and in some cases, the future format for the state’s poorest-performing public schools.

How does the Achievement School District fit into all of this?

Passed in the 2015 legislative session, Assembly Bill 448 created the Achievement School District, which links struggling schools with a charter operator or transformation team. State officials can select up to six schools each year for inclusion in the ASD. The chosen schools would be among the most troubled ones in the state — either elementary or middle schools performing in the bottom 5 percent or high schools with graduation rates below 60 percent.

If the chosen schools successfully hit their improvement targets, the schools would face a choice after six years in the ASD: They could return to their home district, apply for a renewal with the ASD or apply to be part of the State Public Charter School Authority.

The ASD has received strong pushback from parents and people within the Clark County School District, which had the bulk of schools eligible for inclusion. Opponents argue the schools’ takeover by a charter operator or transformation team ignores local efforts to boost students’ academic performance.

Jana Wilcox Lavin, the superintendent of the ASD, was involved in a similar conversion program for struggling schools in Tennessee. She said she believes the resistance, particularly in Las Vegas, stems from misinformation about the ASD’s purpose.

“I think there is a lot of confusion about what the ASD is and what it is all about and how it fits into the broader efforts to improve schools,” she said. “We have fundamentally always been about parent voice and parent empowerment and parents being at the table.”

What’s the future of the ASD?

The ASD encountered a setback earlier this year when The Los Angeles Times reported that federal authorities were investigating allegations of fraud and money mismanagement at the Celerity Educational Group, a charter school manager that had applied to operate schools in the ASD. The Nevada Department of Education swiftly revoked Celerity’s application and also announced that it was delaying the conversion of five schools into charters.

The ASD only will oversee two schools during the next academic year — Futuro Academy, which is opening a new building, and the Andre Agassi College Preparatory Academy, which has partnered with an operator called Democracy Prep Public Schools.

Other charter operators or transformation teams hoping to participate in the ASD for the 2018-2019 academic year have until the end of July to apply. Applicants go through a review process that involves state officials as well as external, national experts, Wilcox Lavin said.

The controversial program has been a topic of conversation at the Nevada Legislature this session. Democratic Assemblywoman Dina Neal is sponsoring legislation that would abolish the ASD, but Gov. Brian Sandoval likely would veto the measure if it passes the Legislature.

What else is on the horizon for charter schools?

Several bills on charter schools have cropped up in the first month of the Nevada legislative session. Republicans who are in the minority tend to be more supportive of charter schools, but they have a Democratic ally in Senate Majority Leader Aaron Ford, a former educator who at one point wanted to start a chain of charter schools himself.

Among the bills up for discussion: