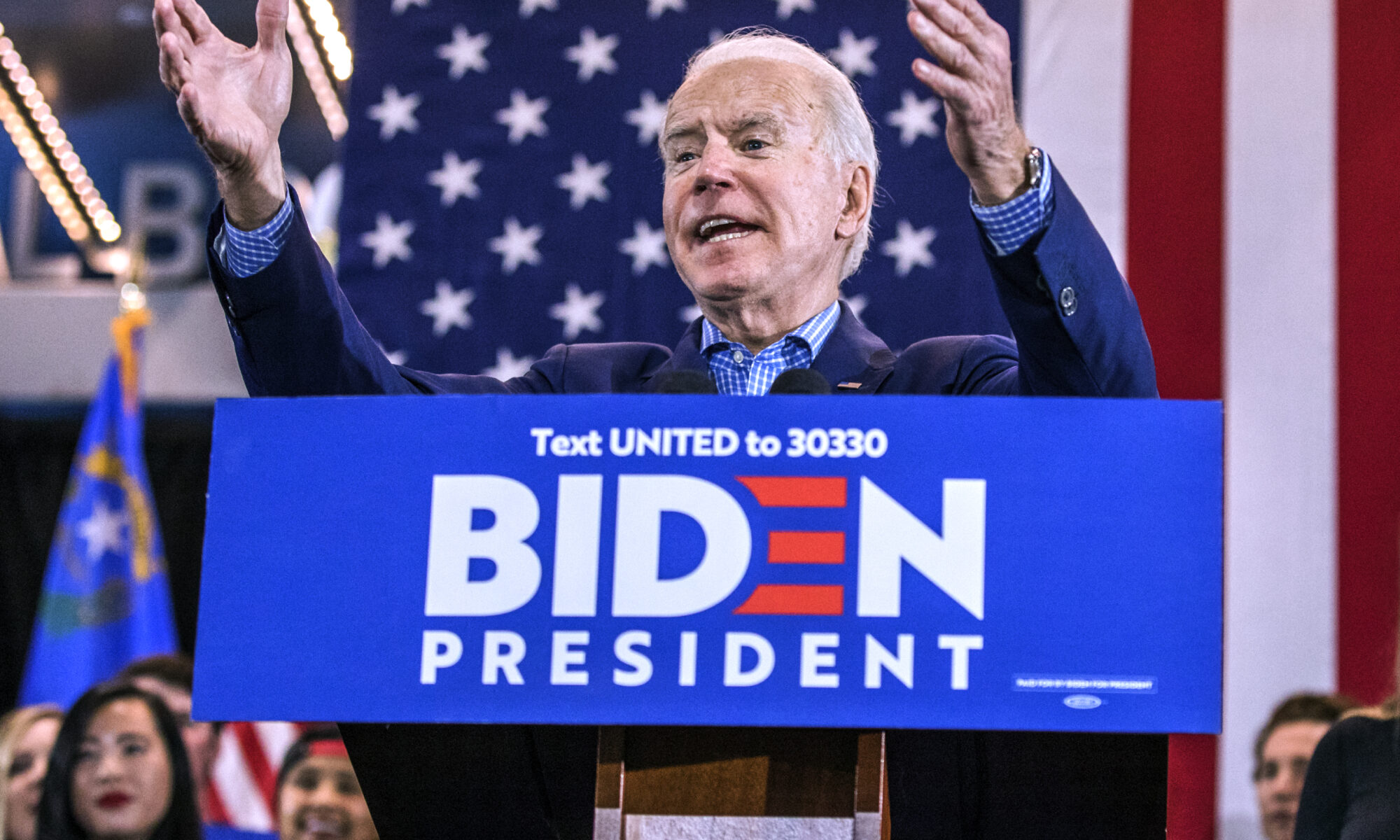 David Colborne was active in the Libertarian Party for two decades. During that time, he blogged intermittently on his personal blog, ran for office twice as a Libertarian candidate, and served on the executive committee for his state and county Libertarian Party chapters. He is now an IT manager, a registered non-partisan voter, and the father of two sons. You can follow him on Twitter @DavidColborne or email him at david@colbornemmx.com.

We’re not publishing a one-word column.

The length of most of your columns and what each one does to my weekend is a separate discussion. I’m talking about this one in particular.

What’s wrong with it?

So it shouldn’t take long to edit.

Opinion columns are supposed to take a firm stand...

… and attempt to persuade the reader to agree.

Who am I going to persuade, exactly? The 74 percent of Republican voters who believe Biden only won because of fraud? The openly craven Republican candidates, like Adam Laxalt and Joey Gilbert, who are pandering to these people by openly claiming Donald Trump is a dispossessed antipope holding court in Mar-a-Lago?

Perhaps I can convince more cowardly Republican candidates, like Dean Heller and James Wheeler, who believe mouthing the words “election integrity” and “forensic audit” while swallowing any mention of “Biden” or “Harris” will let them straddle both sides of the line, all while they claim credit for the “courage” of their “convictions” to their base whenever someone like me calls them out for the disingenuousness.

Maybe I can convince invertebrate Republicans like Joe Lombardo, who “can’t opine” because he’s “not aware of that.” Who needs a spine when you’re running as a cryogenically defrosted jellyfish who hibernated through the last 24 months?

Why should I expect anything I write to be any different?

Considerable time and energy was spent during the latter half of the 20th century keeping the limits of mainstream political discourse within eyesight of objective reality. William F. Buckley helped Republicans keep Birchers — a group of conservatives following a candy salesman who believed the Americans and Soviets were conspiring together in an Illuminati-led plot — at arm’s length from most meaningful levers of power. Democrats, meanwhile, fought desperately to keep Lyndon LaRouche — a fraud who used baroque conspiracy theories to bilk supporters out of millions — away from the party and politics more generally. Neither mainstream Republicans nor Democrats were wholly successful, but at least they tried to ground their ideologies and proposed policies on actual facts on the ground.

The reason both parties kept the conspiratorial fringe away from power is because once someone is convinced British monarchs are drug peddling lizard people, once someone is convinced Americans and Soviets are two sides of the same Illuminati-controlled coin, once someone’s convinced children are being trafficked through online furniture companies, there’s no end to where their delusions may take them. Sure, you might be able to convince them you’re on their side, that you’re no sheeple, at least for an election — but what happens when your facts go up against their imagination, like what happened in Arizona? Or, worse yet, what happens when they decide you need their help to uncover the vast conspiracy you’re both supposedly in on?

There was a time when conservative intellectuals understood that conspiratorial thinking was fundamentally the product of an authoritarian mindset — the product of a mindset which assumes human history can be led down a path which solely advances the ends of those leading humanity, with or without the consent of those being led, with or without the overt terror normally needed to keep people in line. It is, in short, a fairytale for despots who would love nothing more than for this to be possible, who would love nothing more than to set a chessboard in their mind, make their opening move, and then win by default. In reality, even though chess is a two person game on a standard board with simple rules, chessmasters still have opponents, and those opponents get a say in how each game goes. Authoritarianism, and central planning more generally, is a one-against-many game, one in which each player, and Mother Nature itself, gets a say in how the board is set up and what the rules will be. By its very nature, it’s doomed to failure.

Now, however, they’re openly cheering Trump on. When you’re in a “Flight 93 election,” when you’re in a “counter-revolutionary moment,” you don’t sweat little things like due process or the consent of the governed. You don’t sweat little things like accurately counting every vote — in a world in which millions of votes are potentially fraudulent, why shouldn’t some of those millions be fraudulent in your favor? You don’t even sweat an insurrection on live television, committed by supporters of Donald Trump, which tore through the nation’s capitol — it was a hoax, actually, and even if it wasn’t, Black Lives Matter protests did more damage in more cities, so it’s special pleading to hold conservative protesters accountable when they demand Congress throw out electoral votes and sack the Capitol when they don’t get their way. Besides, 11 million more Americans voted for Donald Trump in 2020 than in 2016 — surely we can’t suppress their expressed will?

So here we are, in a state and a nation where one political party is wholly and enthusiastically in thrall to a delusion, self-justified on the grounds that, well, it’s not like Hillary Clinton voters took their defeat well (Remember when members of the Women’s March stormed Congress in 2017 and put several police officers in the hospital? Me neither.), so why shouldn’t they fight back with delusions of their own?

Perhaps because “My imagination can beat up your imagination” is not a sustainable basis for peaceful coexistence. Perhaps because, when one person points at the Moon and screams, “It’s blue!”, the answer isn’t to scream, “No, it’s red, and I have a God-given right to shoot you for disagreeing!” Perhaps because two wrongs don’t make a right, especially when the second wrong is exponentially worse than the first.

But, again, who am I going to persuade? I’m not offering free candy or presents, so I’m much less persuasive than the Easter Bunny or Santa Claus — and I’m not offering the restoration of God-Emperor Trump to his throne in the White House, from which his benevolent light can hold back the forces of Chaos, so I’m much less persuasive than Newsmax or OAN.

Perhaps I can persuade the 95 percent of Democratic voters who believe Biden won fair and square? Oh wait, they already agree with me.

Or do we actually think the 11 percent of Nevadans who told the Mellman Poll they “don’t know” whether our president was elected or not were serious about that response and not just trying to hang up the phone as fast as humanly possible? Or perhaps I should pretend people too disinterested to have an opinion one way or the other about who’s president of the United States and whether he was elected fairly or not read opinion columns?

You could always write about something else.

It’s true, I could write another column about COVID-19, a pandemic which enjoys widespread transpartisan agreement and support on its nature, appropriate public policy countermeasures, and responsible individual choices.

Speaking of COVID-19, I could write about how Idaho’s lieutenant governor briefly seized power while their governor was in Texas and banned vaccination and testing requirements, as well as vaccine passports. While she was in power, she also tried to deploy the Idaho National Guard to the U.S.-Mexico border. Her orders were overturned as soon as Gov. Brad Miller returned, of course. Oh, and they’re both Republicans, so things are clearly going well for that party, even in states like Idaho where they enjoy single-party rule.

Alas, this is The Nevada Independent, not The Idaho Independent. On the other hand, imagine an alternate world where former lieutenant governor Kate Marshall seized the Governor’s Mansion and started issuing executive orders while Steve Sisolak went to a conference somewhere?

You wrote 4,500 words on blockchains, then wrote another 2,500 word follow-up three weeks later. Write about technology! You’re an IT Manager! Surely you have something interesting to say about it?

There you go! How will that affect Nevadans?

If they’re using a Windows computer, their computer was manufactured in the past few years, and their workplace isn’t blocking upgrades to Windows 11, their Start Menu may move to the bottom-middle of their screen.

There are other changes, but most of them aren’t really noticeable unless you plan on running Linux applications on your Windows computer. Most people aren’t.

Fine. Android 12 is also coming out.

Okay. How will that affect Nevadans?

It means the few Android phones in the state whose operating system updates aren’t blocked by their cell phone providers or by their manufacturer will reboot in late October. After they finish rebooting, those phones will have a more colorful user interface.

Probably, but it doesn’t matter. Every other Android phone user will either have to wait for their manufacturer or cell phone provider to analyze the update, reinsert the “value add” software manufacturers and cell phone providers love so much, and issue the update to their phones, or they’ll have to go without until they buy a new phone with Android 12 preinstalled.

As manufacturers and cell phone carriers make money on reselling phones, take a guess on which path they’d prefer you to take.

iPhone users will, of course, continue to routinely receive iOS updates for five years because Apple does not openly loathe their customers, even if they don’t particularly trust them.

So you have an iPhone, then?

Absolutely not. Give me freedom to install custom operating systems on my phone or give me death!

So you wiped Android off your phone and replaced it with something else?

Absolutely not. That sounds complicated. I’m an IT manager, not an IT professional. I have people and PowerApps for that now.

So you ordered someone else to wipe Android off your phone and replace it with something else?

Then… was there a point to any of this?

Will you promise to Write Back Better next week? Preferably in fewer than three trillion words?