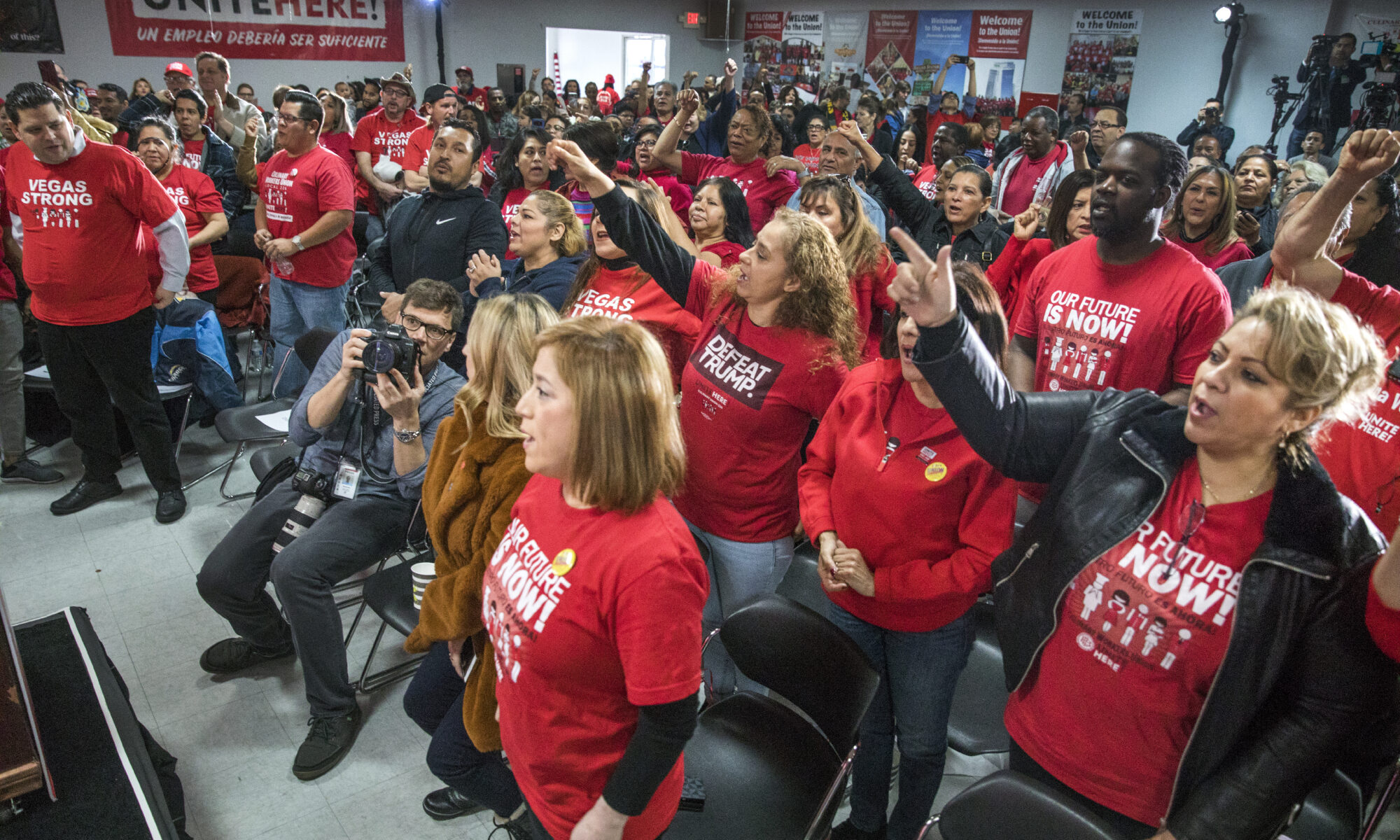 Minnesota Sen. Amy Klobuchar and South Bend Mayor Pete Buttigieg found a receptive crowd waiting for them Saturday morning at the Culinary Union’s headquarters in Las Vegas, where they touted proposals that would allow union members to keep their hard-fought health insurance plans.

Choice was the primary pitch from the two Democratic presidential hopefuls to union workers, who have now hosted a total of six Democratic presidential hopefuls at a series of town halls over the last two months. Where some of their more progressive opponents support plans that would move all Americans under one, government-funded plan, what’s known as Medicare for all, both Klobuchar and Buttigieg promised union members that they would have the option to either stay on their health plan or join a government plan, what’s known as a public option, under their health care proposals.

Members of the Culinary Union have been fiercely defensive of their health plan, known as a union health trust and which they’ve negotiated for over several decades, and union leaders have signaled that candidates’ positions on health care will be key in deciding who they ultimately decide to endorse.

The union’s parent, UNITE HERE, plans to meet at the end of the month to decide whether to endorse as a national organization, and, if not, the union is likely to endorse as a local, Culinary Secretary-Treasurer Geoconda Arguello-Kline told The Nevada Independent on Saturday.

“When we have something like [Medicare for all], that’s going to be very difficult for the members. They never will accept that because health care is peace of mind,” Arguello-Kline said. “The members, we know how much they’ve been fighting for, and we know how much they really care because they feel like they have the best health care in Nevada.”

Klobuchar, who has served in the Senate since 2007, voted in favor of the landmark Affordable Care Act. But she acknowledged to Culinary Union members that the law “wasn’t perfect” during the town hall, alluding to concerns over a tax on high-cost health plans loathed by some unions, including the Culinary.

“I said it from the beginning. It wasn’t perfect for some of the union health care plans. We have now fixed that, but it wasn’t perfect,” Klobuchar said.

Klobuchar said that instead of all the work spent on the law going “down the drain,” she wants to make it better.

“Some of my colleagues, I know they mean well, but in Minnesota we’ve got a lot of lakes, 10,000 some lakes. We always say if you want to cross the water you build a bridge, you don’t blow one up,” Klobuchar said. “I think when you look at your interests of your family, and you look at all of your health plans and what your union has worked so hard to negotiate for you. We do not want to take those benefits away. We do not want to blow those up.”

Buttigieg, who also supports a public option, took the same tack with the union crowd, even pre-empting the anticipated health care question during his opening remarks.

“Now there are a lot of folks that don’t have the benefit of organized labor and union participation, and that’s one of the reasons why we got to set up that public alternative, that quality public alternative,” Buttigieg said. “I believe if it’s the best answer for everybody, well, then everybody will choose it anyway … This is something that you have fought for and earned and bargained in order to get. We can’t put that in jeopardy.”

Union members pressed the two candidates about what they would do to keep the country away from war, in light of the recent U.S. strike that killed Iranian military leader Qassem Soleimani. Iran retaliated by launching missiles at two military bases housing U.S. troops in Iraq last week, appearing to escalate the conflict and raising questions about whether the countries are on a path to war.

Buttigieg, who served in the Navy in Afghanistan, promised that he would never put service members in harm’s way unless there was no other alternative and criticized President Donald Trump for rushing into the decision to launch the strike that killed Soleimani without taking proper steps.

“Does anybody really think that this president read all of the intelligence reports, checked with leadership from both parties in Congress, consulted with our allies, thought through all the moves?” he said. “Absolutely not. He didn’t know any of that. And now we see one of the most dangerous places in the world becoming even more dangerous.”

Klobuchar had a similar response, criticizing Trump for ordering the strike without consulting Congress.

“I pledge to you that when I am president I will go to Congress,” Klobuchar said. “This president seems to flaunt our laws, make decisions without even consulting the leaders in Congress, which is what just happened.”

The candidates also addressed questions on immigration, promising to establish a pathway to citizenship for undocumented immigrants. The Culinary Union’s members hail from 178 countries and speak more than 40 different languages.

Klobuchar shared a story about a family in Minnesota, who were Muslim, who were out eating dinner at a restaurant when they were told to “go home to where you came from.”

“The little girl looks up at her mom and she said, ‘Mom, you said that we could eat out tonight. I don’t want to go home and eat dinner.’ Think of the innocent words of that child,” Klobuchar said, to applause from the crowd. “She could have been any of your children. She only knows one home, and that is your state, that is my state, that is the United States of America.”

Later, Buttigieg shared with the union crowd how immigrants had contributed to the growth of his city.

“If it weren’t for the contributions of people who come to this country, we would not be growing at all,” Buttigieg said. “If you took out immigration, we would be a shrinking city.”

“But when Station Casinos refuses to bargain and recognize Culinary workers, that is not only immoral, that is unlawful and it diminishes the freedom of those workers,” Buttigieg said.

Buttigieg twice showed off his fluency in Spanish for the largely immigrant-heavy union, many of whose members are native Spanish speakers.