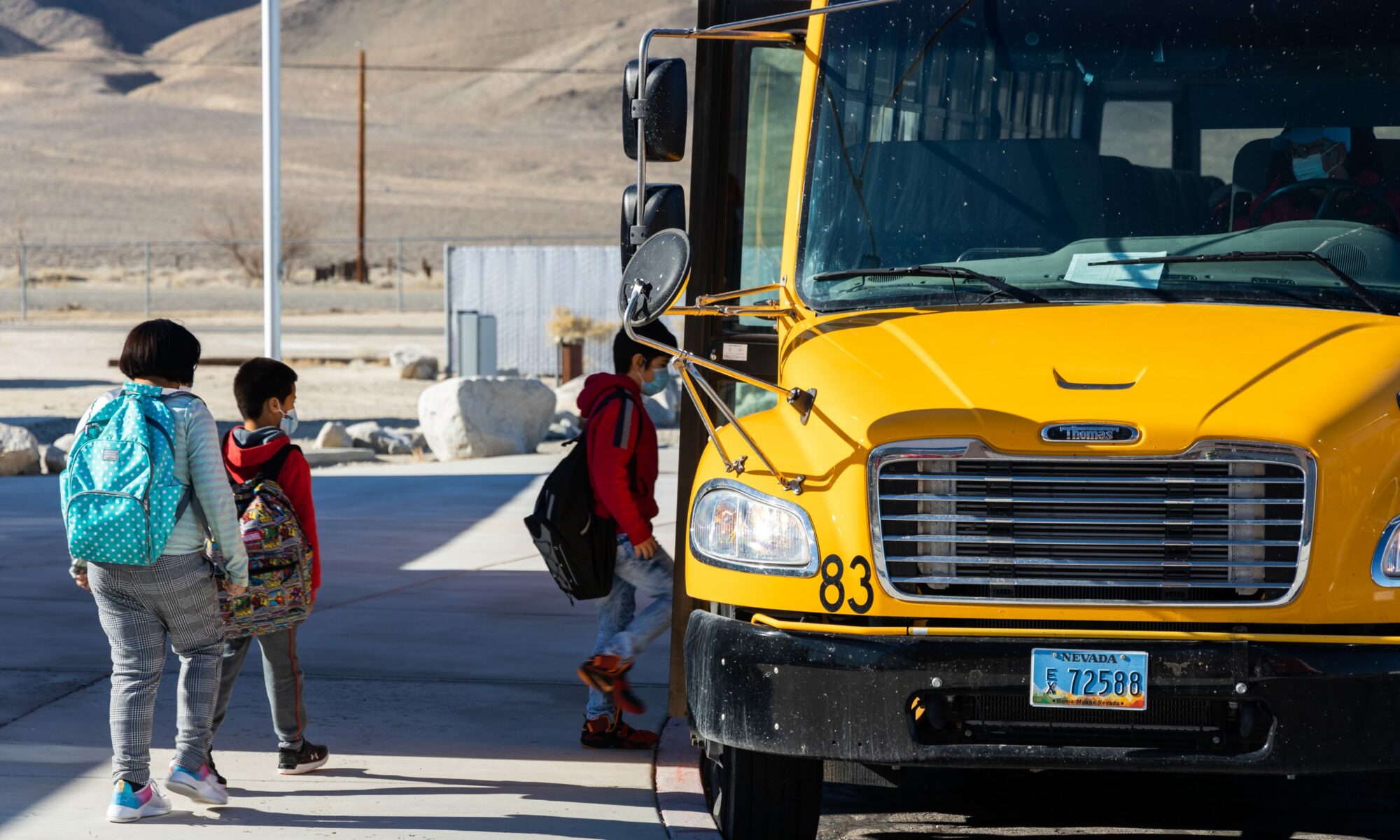 The full-time return of in-person learning marked a pandemic milestone, but ongoing busing problems have complicated the logistics of simply getting students to and from school.

Ana Rosa Delgado, a mother of four who lives in Las Vegas, is never sure what time her two boys, ages 4 and 10, will make it home. They take the bus each day, while she drives her older daughters to college and Southeast Career and Technical Academy.

But her sons’ dropoff times have been inconsistent, she said, with them occasionally not arriving home until after 5 p.m. hungry, tired and frustrated. They both attend Crestwood Elementary School near downtown Las Vegas.

“If I don't call the school, they don’t let me know that the bus never came for my son. It has already happened a few times,” Delgado said. “My youngest uses a wheelchair and takes a special bus. One day my fifth-grade son was waiting and he called me saying, ‘Mommy, my little brother is here, too.’”

Because her sons have to take separate buses, Delgado said, it is more difficult keeping track of them and making sure they are both getting home at a reasonable time.

“I guess we could figure something out and I could take them to school,” Delgado said. “But if the district offers us this service, why miss it?”

Her family’s experience is not unique. School districts across the state and nation acknowledge they’re struggling to maintain bus schedules given difficulties recruiting and retaining drivers.

As of Monday, the Clark County School District was short 237 bus drivers, or about 15 percent of its workforce, said Jennifer Vobis, the district’s transportation director. District administrators consider the district fully staffed with 1,570 bus drivers, which includes drivers for sporting activities, field trips and substitute needs.

The Washoe County School District is in a similar position, down roughly 50 bus drivers, or about 16.5 percent of its needed workforce, said Scott Lee, the Reno-area district’s transportation director.

While some districts are offering cash incentives, it hasn’t been enough to overcome the staffing shortages. Transportation directors attribute the hiring difficulties to a variety of factors, including the competitive labor market, leading to higher pay in other industries, or the fact that many drivers are on nine-month contracts, which may dissuade people who want or need full-time, year-round employment.

“Everywhere is hiring. There are staff shortages everywhere,” Lee said. "Still, it’s very frustrating from the end of a parent if you don’t know if your student is going to be there 15 minutes late that day or on time, or how long do you have to wait at the bus stop to pick up a second-grader?”

The Washoe County School District began notifying families Wednesday that it would be starting some “double runs,” meaning a bus will pick up a first group of students, drop them off, then return to the school and pick up a second group of students. Lee characterized the decision as an effort to create “some sort of order to this chaos” as the district frantically works to hire and train additional bus drivers.

Though not an ideal situation, Lee said it will at least give families a more predictable busing schedule. Even with an all-hands-on-deck situation — nearly all district employees with a commercial driver’s license are helping staff routes — there are not enough drivers to prevent delays.

“This is a way of still being able to provide transportation service,” he said. “It’s just not going to be like it was last year or the year before. It’s going to look different.”

As school districts try to catch up, frustrations are mounting among parents. Rebecca Garcia, president of the Nevada PTA and a founder of the CCSD Parents group on Facebook, said she has heard many complaints from parents whose children’s buses arrive up to an hour late, don’t show up at all or are too full to let them aboard.

Garcia estimates her own middle school-age son’s bus was late roughly 40 percent of the time during the first month of school.

“Almost every notice we got in the morning, for about two weeks, said that the bus wasn't going to be 15 minutes late, it was going to be like an hour late,” Garcia said. “An hour wait — that is 20 [minutes] after the bell rings. That's a lot of learning loss when we're coming off of such a challenging year with distance learning.”

Garcia said the school district should have at least given parents a warning that without enough drivers, busing problems would be common.

“They made it seem like they would get it done, and it’s just very clear they haven’t gotten it done,” she said. “Students are sitting on the side of the road in 110-degree heat, and that’s just not OK.”

The Clark County School District’s on-time rate for buses hovers around 88 percent, though it has reached 93 percent on some days, Vobis said. A bus is considered on time if it arrives within a designated 15-minute window.

How soon might the busing challenges ease up? Transportation officials said they can’t give a timeline because it depends on how rapidly enough drivers can be hired and trained — a process that can take four weeks.

The Lyon and Elko county school districts have advertised $5,000 and $3,000 signing bonuses, respectively, for prospective bus drivers. The Washoe County School District also announced cash incentives for new and existing bus drivers over the summer. The Clark County School District has not followed suit, at least not yet. (A summary of the district’s spending priorities for federal American Rescue Plan funding does not specifically cite money for bus drivers, though it includes a broader mention of “employee stipends and incentive MOAs [Memorandum of Agreement]” as part of its coordinated response to COVID-19.)

“Everything is on the table,” Vobis said. “We are constantly working with the leadership, the district leadership, and finding ways to resolve and help mitigate our driver vacancy.”

In Washoe County, Lee said applications for bus driver positions have increased, but he’s not sure whether it’s the result of enhanced advertising efforts or the financial incentives.

Vobis encouraged parents to download and use a district-sponsored app called Onboard that uses GPS information to show bus locations. She also asked for their patience.

“We understand the frustration,” she said, “and we are working hard every day to make sure that they are getting quality service and we will continue to work hard until our vacancy is reduced significantly.”

Massachusetts, meanwhile, has taken a more drastic step to offset its busing challenges: Gov. Charlie Baker called upon the National Guard to help transport students to school.
“The safe and reliable transportation to school each day is critical to our children's safety and education,” Baker tweeted on Monday.