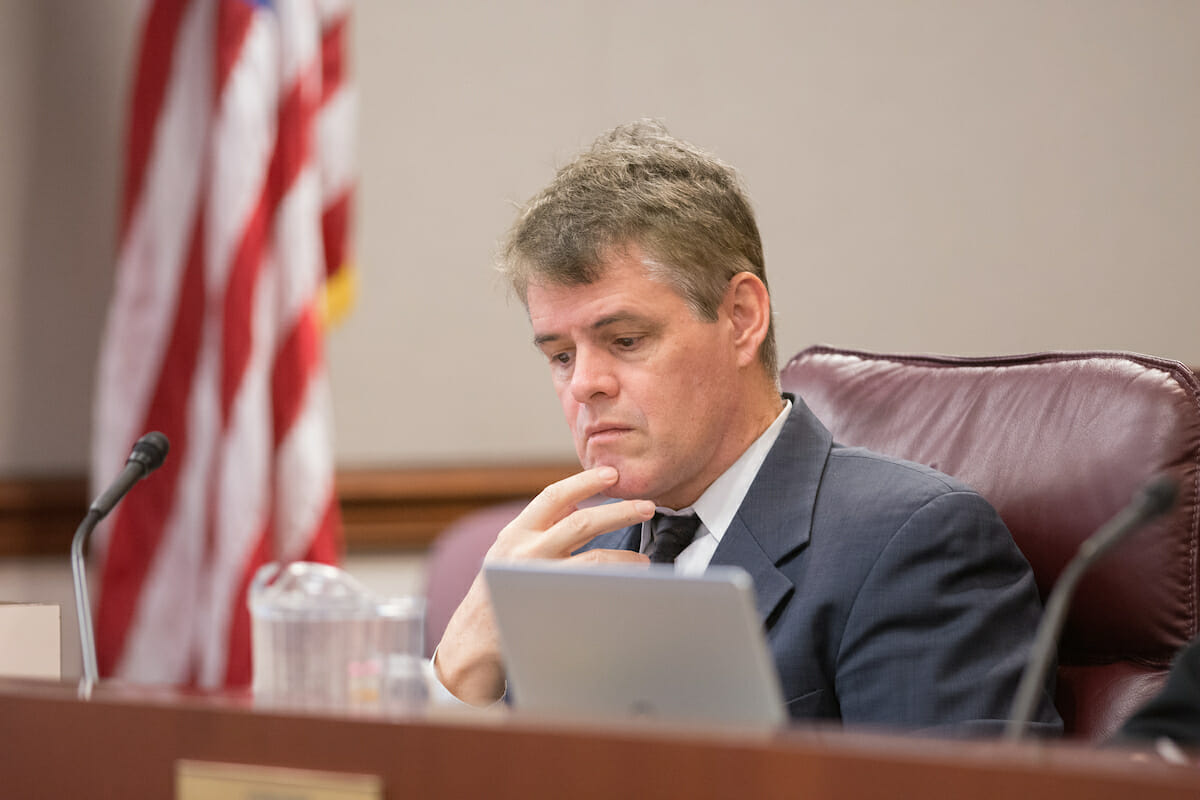 One major solution for Nevada’s struggling schools was so obvious that Republican Assemblyman Chris Edwards could illustrate it with three shiny red apples he fished from his suit jacket pocket and lined up in a row during a Monday committee hearing.

“Having students start school at the wrong time also takes away from the effectiveness of other programs that we’ve implemented,” Edwards told the Assembly Education Committee, referring to new initiatives such as Zoom Schools and Breakfast After the Bell. “I don’t anticipate there will be any real costs, unless there’s something crazy I’m missing.”

Edwards’ bill -- and a similar one from his Democratic colleague Richard Carrillo -- seek to shuffle Nevada school start times to align with research that shows teens’ body clocks shift up to two hours later in response to  puberty and they function optimally after about nine hours of sleep at night. While existing law doesn’t dictate school start times and local boards usually make those decisions, many high schools start in the 7 a.m. hour to accommodate sports and other after-school activities.

When school starts at 7:30 a.m., only 34 percent of high school students are getting eight hours or more of sleep on a school night, according to the American Academy of Pediatrics. That figure jumps to 66 percent when school starts as late as 8:55 a.m.

The early schedule at many Nevada high schools prompts many teens to wake up at 5 a.m. or even 4 a.m. to get ready and catch the bus for class, according to Skyler Bradley, a teenager who represents Senate District 10 in the Nevada Youth Legislature.

“I cannot tell you how many times I’ve seen students fall asleep in my classes,” he said. “I myself may or may not be guilty of this.”

Bradley pointed to a study that showed car crashes declined 15 percent over two years in a Kentucky county where high school start times were pushed back from 7:30 a.m. to 8:30 a.m. He described the matter as a public health consideration that could ultimately save money even if districts have to pay more to adjust busing schedules.

But opponents included representatives of the influential Clark and Washoe county school districts who said the bills would force districts to field any additional transportation costs, such as extra buses to take students to school in earlier and later shifts. They also argued that transportation decisions should be made at the local level rather than by state lawmakers.

Pushing school start times back would also push back school ending times and could squeeze out extracurricular activities -- especially in rural districts where activities, such as away games, already involve a long bus ride.

“High school isn’t just math and science and English. Obviously those are real important things. But our kids learn a lot from being on teams, from working, singing in a choir, doing rodeo, whatever you’re doing,” said Mary Pierczynski, lobbyist for the Nevada Association of School Superintendents. “I think when some of these times change, at least for some of our kids in 15 rural counties, it makes it prohibitive to participate.”

Democratic Assemblywoman Heidi Swank said the existing schedules allowed high schoolers to work in the afternoon -- something especially important if they’re helping support their families. And high school students who come home early enough can help pick up and take care of their younger siblings who are on a later release schedule.

But lawmakers have mulled changes in at least one prior session. In 2015, Democratic Sen. Tick Segerblom and Republican Sen. Becky Harris co-sponsored a bill to push back start times.

At the time, University of Nevada, Reno sociology professor Mariah Evans called the measure relatively inexpensive but “probably the highest value education intervention that we know about,” citing research on its effects by Paul Kelley of Oxford University's Sleep and Circadian Neuroscience Institute.

The measure passed one committee but died without getting a vote from the full Senate.

Carrillo argued that this is the session to get something done.

Republican Assemblyman Keith Pickard said he understood the argument that start time decisions should be left to local jurisdictions, but he said he was troubled because it seemed the districts were more concerned about logistics than student performance.