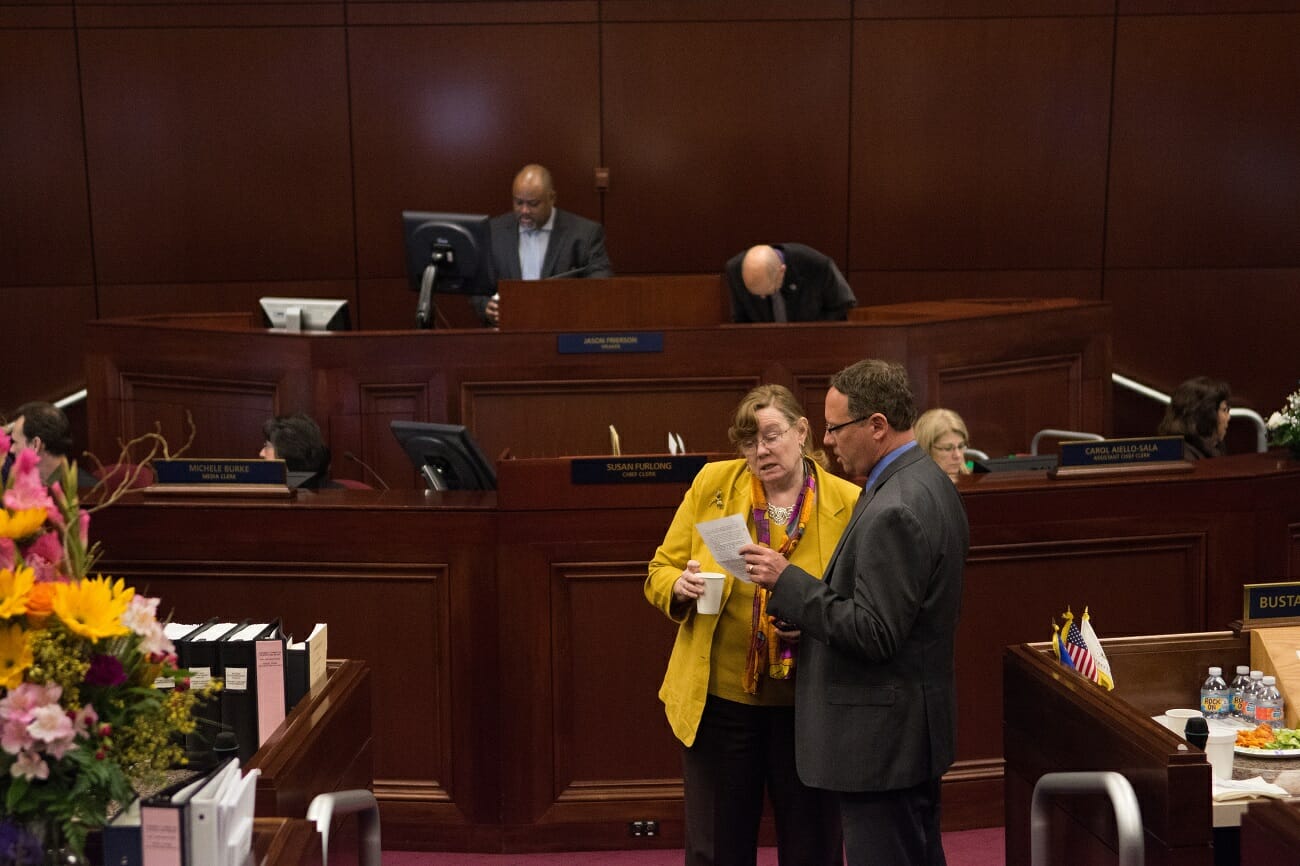 By Riley Snyder and Megan Messerly

Lawmakers worked alongside legal staff late into the night on Monday, rushing to beat a deadline for individual lawmaker bill introductions. Assembly and Senate members introduced more than 160 pieces of legislation throughout the day.

Here’s a quick look at some of the important pieces of legislation introduced that will become focal points for the rest of the 120-day session.

Republican Assemblyman Lisa Krasner is pushing for a bill, AB164, that would require voters to present a driver’s licenses or other valid form of dedication when casting their ballots.

Senate Republicans last week included voter ID in their list of priorities for the 2017 session, while Assembly Minority Leader Paul Anderson indicated last week that Republican proposals such as voter ID and campus carry were just “rhetoric” unless there was demand for them on both sides of the aisle.

Lawmakers introduced a number of bills related to voting rights and elections on Monday, including:

The fight for $15 comes to the Assembly

Several Assembly Democrats introduced AB175 on Monday, which would raise the minimum wage in Nevada to $15 an hour for employers who don’t offer their workers health insurance and $14 an hour for those who do. Assemblymembers William McCurdy, Edgar Flores, Richard Carrillo, Chris Brooks and Olivia Diaz are sponsoring the bill with Assemblywomen Amber Joiner and Daniele Monroe-Moreno signing on as co-sponsors.

The proposal would gradually raise Nevada’s minimum wage by $1.25 an hour a year, with the minimum wage topping out at $15 an hour in 2022.

McCurdy, who has organized for the Service Employees International Union and is now running to chair the state Democratic Party, called raising the minimum wage “an important step toward bridging the widening gap between income and opportunity inequality.”

Two Democratic legislators are pushing for legislation that would make it a crime to bring a concealed firearm into a public library.

The legislation would allow a concealed carry permit holder to obtain written permission from the governing board of the public library to continue carrying a weapon while on library premises.

Democrats have introduced legislation that would ban hydraulic fracturing, or fracking, in Nevada.

Assemblyman Justin Watkins is the primary sponsor of AB159, which would repeal the state’s regulatory process for obtaining a hydraulic fracturing license, prohibit any fracking within the state and invalidate any businesses with existing licenses.

Fracking, which the bill defines as “the process of pumping fluid into or under the surface of the ground to create fractures in the rock to facilitate the production or recovery of oil or gas” is a relatively new business in Nevada. State officials approved regulations allowing for fracking in 2014.

Fish pedicures could soon be coming to a Nevada city near you, if Republican Assemblyman Jim Marchant has his way and the Legislature passes AB158.

Banned in more than 10 states, fish pedicures are relatively common in spas in other countries, where patrons pay to soak their feet and legs in tubs filled with schools of tiny fish that nibble away dead flesh. But the practice has raised concerns among cosmetology regulators who worry that the fish and fish pedicure tubs cannot be sufficiently cleaned and disinfected between customers. The so-called doctor fish, a species called Garra rufa, are native to Anatolia and the Middle East.

The teams, also known as SOTs, are part of an ambitious overhaul of the Clark County School District that include individual school principals creating their own budgets with the input of organization teams made up of staff, teachers and parents. The legislation would grant civil immunity “for any damages resulting from an act or omission of the volunteer member, another volunteer member or the organizational team.”

Concealed carry for all

Nevadans must apply for a permit if they wish to carry a concealed weapon, but a bill introduced into the Assembly today would create concealed carry for all.

Republican Assemblyman Jim Marchant’s bill, AB171, would remove the ban on carrying concealed weapons without a permit. The bill strikes the language banning people from carrying any concealed “pistol, revolver or other firearm, other dangerous or deadly weapon or pneumatic gun.”

Nevadans would still not be able to conceal carry machetes or any explosive substances other than ammunition.

One of the most vocal opponents of last session’s record-breaking tax increase is proposing a bevy of changes to tax law.

Republican Assemblyman Ira Hansen introduced AB172 on Monday, a broad measure that would roll back and modify some of the tax changes made in 2015.

The proposal would cut annual business license fees for foreign and domestic corporations from $500 to $200, and require businesses to simultaneously file their organizational documents and initial list of officers with the secretary of state’s office.

The legislation would also remove a requirement that businesses falling below $4 million in gross revenue have to file a commerce tax return, and instead would require them to sign a declaration that their total revenue fell below the threshold on their annual business license renewal forms.

It would also copy portions of Wyoming law dealing with low-profit limited liability corporations, which are explicitly charitable in nature but have more flexibility than traditional foundations or nonprofits.

8:26 a.m. - This story has been updated to correct how AJR5 would change the state constitution.