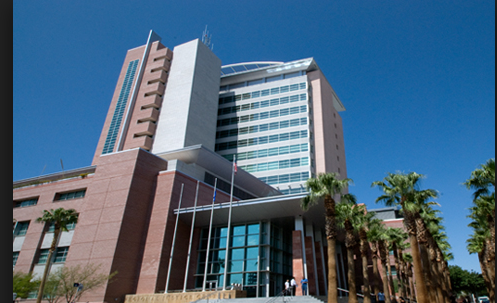 Although you don’t often see it in any legal jurisdiction, it should have come as no surprise. As a devoted member of the Church of Jesus Christ of Latter-day Saints, the eldest son of Bunkerville cattle rancher Cliven Bundy prays often. Friends and family members who assembled at U.S. District Court prayed on bended knee before packing the courtroom on Bundy’s behalf. The group included Bundy’s wife and eight children, who by themselves filled nearly half a row in the courtroom.

Acting as his own attorney, Bundy was attempting to win a pre-trial release after what, by his count, was his 370th day of incarceration in connection with the 2014 standoff at his family’s ranch.

Whether his prayer for freedom is answered in the affirmative remains uncertain. The lengthy and at times contentious hearing concluded without a decision by Judge Foley, who was surely given plenty to consider as the first of three trials associated with the standoff approaches.

Following the prayer, an improvised self-swearing in with a promise to tell the truth, an acknowledgment of his family and faith, references to his family’s 140-year presence in Bunkerville, the Declaration of Independence and Founding Fathers, and several amendments of the Constitution, Judge Foley reminded him that time was limited and encouraged him not to bog down the process. If Bundy wished to give testimony, Foley said, he’d have to be sworn in and subjected to cross-examination.

With his every word being measured by an experienced team of prosecutors led by Assistant U.S. Attorney Steven Myhre, Bundy weighed in deeper. He wasn’t shy about stating his knowledge of the law, the facts as proffered, and his state of mind during the days leading up to the standoff with armed agents of the Bureau of Land Management. The confrontation, which made news internationally, ended without a shot fired.

He tried to make the point that the rhetoric in the government’s charging document was overstated and even wildly inaccurate.

Among his memorable lines:

-- “There was no threat of federal officers. I did not refuse to obey orders.”

-- “I know that there was no organization. This was a spontaneous public protest.”

-- “There was no conspiracy ...We had no intent to do anything illegal, and we did not.”

But although he said he tried at every turn to de-escalate the armed standoff on April 12, some of the hundreds of people who converged on the Bundy Ranch during the standoff were heavily armed. Some were associated with right-wing militia groups. And the photos of a citizen aiming a scoped, high-powered rifle toward a distant group of federal agents doesn’t speak to the success of Bundy’s effort at peacekeeping during the botched roundup by government cowboys.

During his detention hearing, he argued that the government had “mischaracterized my state of mind” and turned his “opinions and thoughts protected by the First Amendment” and comments that were “no more than political hyperbole” into threats deserving of felony charges.

From the superseding indictment, “The gunmen and other Followers did as Bundy ordered. The gunmen, armed with a variety of firearms, including assault rifles, hurriedly loaded themselves into cars and trucks and moved en masse to the Impound Site, jamming the roads and slowing traffic on northbound Interstate-15 to a trickle, making it difficult for state and local law enforcement vehicles to respond.”

The first of three trials is scheduled to start Monday in federal court with six men characterized by the government as low-level “follower-gunmen,” whose alleged criminal involvement was limited to the events of April 12.

The trial for Ryan Bundy, brother Ammon, father Cliven, Peter Santilli and Ryan Payne is scheduled to begin 30 days after the end of the first trial.

Perhaps Bundy’s feeling especially confident, or at least vindicated, after winning an October acquittal in connection with the 41-day occupation of the Malheur National Wildlife Refuge in Oregon. Maybe he missed his calling as a criminal defense attorney and constitutional scholar when he chose chasing cattle on the family ranch.

And maybe this time the old line about the man who represents himself in court having a fool for a client won’t apply in Bundy’s case.

If he continues to represent himself in the trial of his life, I suspect he may need all the prayers he can get.