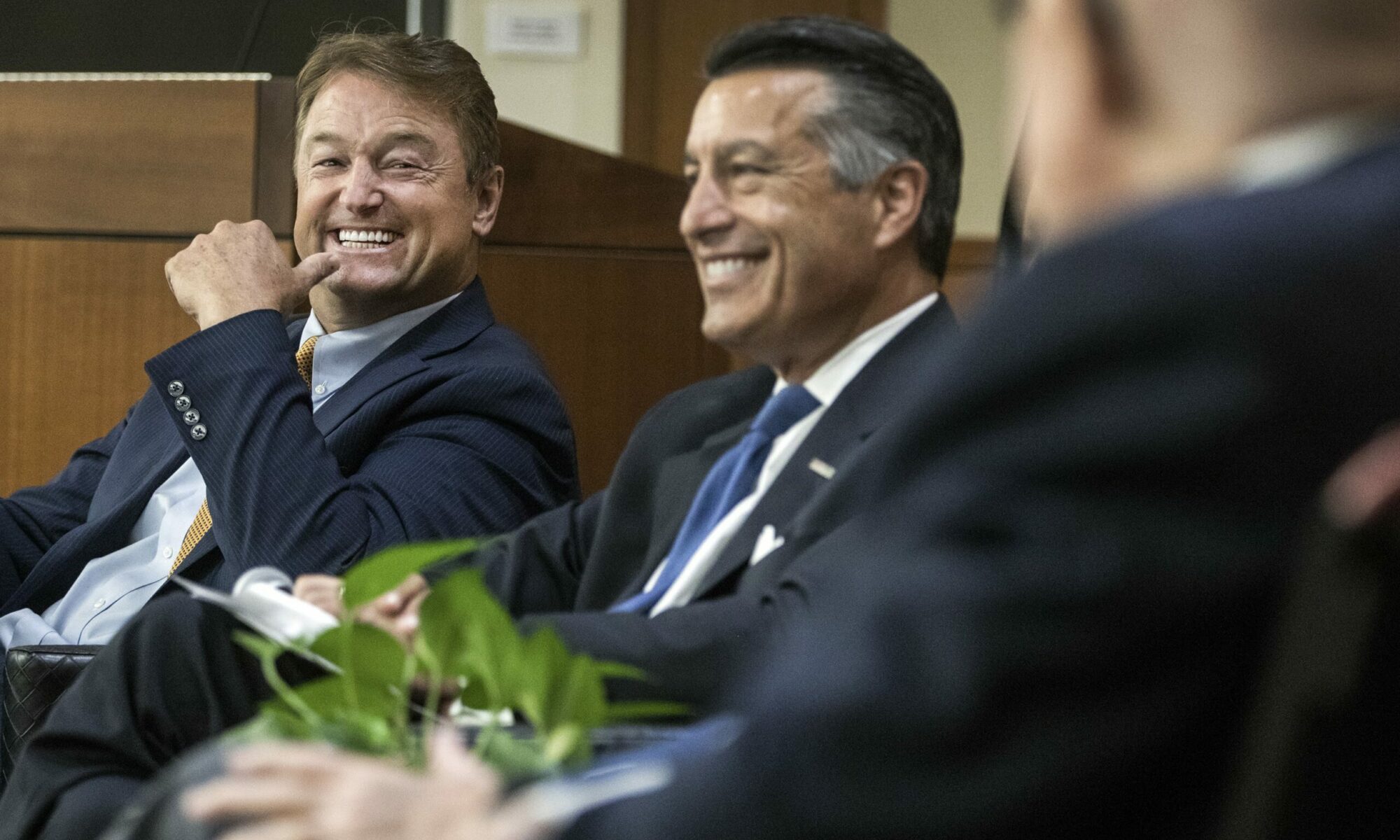 The theme was leadership and public service, and that meant that sooner or later members of the powerhouse panel that assembled Thursday morning at UNLV’s Boyd School of Law’s Moot Courtroom were bound to mention the name that’s anathema to both qualities essential to good governance.

By my count, that’s how far into the scheduled hour-long session four of Nevada’s most successful former elected officials waited before President Donald Trump officially entered their compelling conversation. The panel included former Senate Majority Leader Harry Reid and former U.S. Senators Richard Bryan and Dean Heller with former Gov. Brian Sandoval serving as moderator in his new role at the school as Distinguished Fellow in Law and Leadership.

But, really, they appeared to be alluding to him from the start. Although all agreed Trump didn’t start all Washington’s problems, it’s just as clear that he’s exacerbated most of them. From his policy schizophrenia to his abject insensitivity on innumerable issues and his daily tempest in a tweetstorm, he’s managed to remake the Republican Party in his own image and coarsen public discourse in something akin to political chaos theory.

And so when the question was raised about approaches to governing, the often pugnacious and partisan Reid sounded almost quaint when he talked about simple integrity and giving a straight answer even when that answer is “no.” “I don’t think it’s that complicated,” Reid said.

Oh, how complex it all looks these days when the leader of the free world can’t give a straight answer.

Bryan, who disproved Durocher in a long career and showed that nice guys can finish first, had the temerity to use the word “collegial” and the phrase “working together” as he described the best way forward in a process that’s so easy to demagogue and endlessly grandstand. He also reminded all present of the importance of maintaining a place for those willing to speak their truth to the boss’s power.

Imagine such a statement in today’s White House where differences of opinion are tantamount to pink slips.

Then there’s the vision thing.

“I think a leader needs to know where he or she is going before you can persuade others to join you,” Bryan said. “... A leader should not be asking someone else to do something that he or she would not do. ... I think both corporate leaders and political leaders need to surround themselves with people who are not afraid to say, ‘With all due respect ... have you thought about this.’ I could tell you, I could write a book about the things I did not do, the press releases I did not issue, the press conferences I did not hold, and I think leadership is collegial working together, we’re all in this and this is the goal.”

Imagine a president who thought even once, much less twice, before sending out instant vilification over social media of everything from the American press and his own cabinet appointees to the FBI and the powerless and destitute. Was it so long ago that such bile in such excess would have been all but unimaginable coming publicly from the nation’s chief executive?

Then it was Heller’s turn. Now here was a Republican in the finest tradition, conservative at heart and chamber of commerce to the core, but also an elected official known in the Senate for being willing to cross the aisle to get things done. In his last election cycle, Heller made the mistake of remaining suspicious of Trump’s character and motives, and for his candor tasted the blade.

“Leadership,” Heller said, “it’s so much more about listening than it is about talking. It’s not about making quick decisions ... I think if you spend the time, do your homework, listen and study, that answer’s not going to be that difficult. I agree with Senator Reid, just listen. Listen to all sides, and the answer’s usually pretty obvious.”

Think about that a moment: “Listen to all sides.” Can you imagine?

Clearly, here was a man not meant for the Trump era, where unwavering fealty and the introspection of a junior high cheer squad are essential for success.

Thursday’s event was an undeniable coup by the Boyd school Dean Dan Hamilton and proved an ideal day of transition and celebration for Sandoval in his new role. Those assembled were, after all, many of the state’s greatest leaders.

The image of Reid and Bryan doing a sitdown Hope and Crosby routine will surely remain a long, long time with those who watched them trade one-liners and reminiscences.

“Richard, you wanted to be governor as a boy,” Reid quipped. “All I wanted to do was to get out of Searchlight.”

With Heller as a capable third, it was hard to view the setting in anything but historic terms. Bob Miller and Bob List joined Bryan in an afternoon session of former governors. It was an opportunity to see that many of Nevada’s former political titans in one place may not come again.

There were plenty of laughs and memorable lines. Bryan deadpanned that he’d done some research in preparation for the panel and found, “There are 12 styles of leadership, none of which apply to me.”

After taking the temperature of his fellow Republicans, Heller’s sense was, “If I have to choose between socialism and crazy, I’m going with crazy.” Reid chimed in that he was “going with socialism.”

In assessing the difference between his time in the House and Senate, Heller smiled and said, “At least in the Senate, you’re equal to your staff.”

There was, to borrow Bryan’s line, a spirit of collegiality that’s much easier to achieve after battling politicians have left office for the last time. And then there was Reid, from his wheelchair, lamenting the loss of the Senate as he and the others, to their own degrees, had known it. It was a somber moment that, given the current climate in Washington, resonated like an old clock tower from a bygone era.

“In my head I know he’s right,” Bryan said wistfully. “In my heart I hope he’s wrong.”