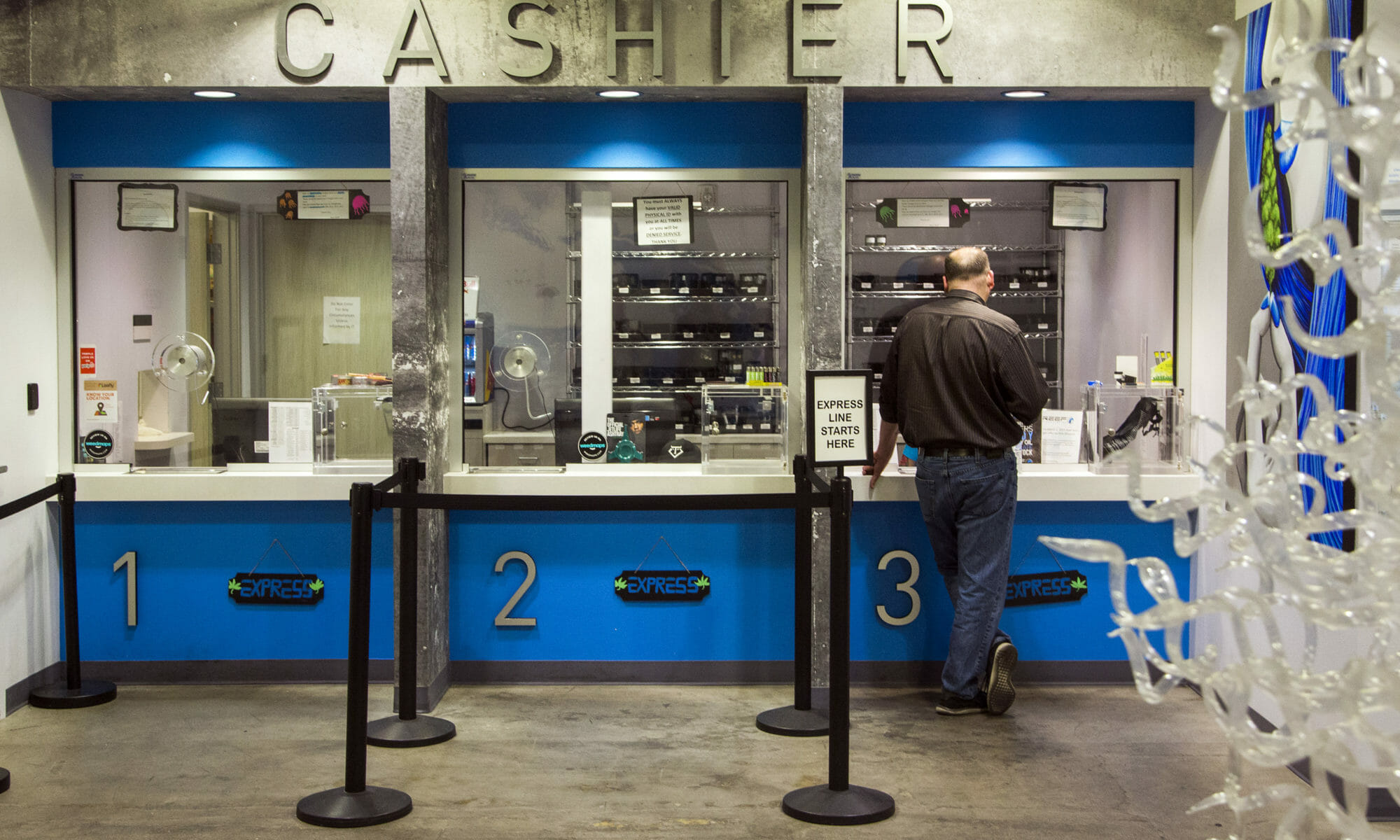 As Nevada pushes forward to launch recreational marijuana sales by July 1, some dispensaries are encountering an expensive hurdle — local governments.

Although there are 172 recreational marijuana store licenses up for grabs statewide,  there are only about 60 medical marijuana dispensaries that are up and running, which is a prerequisite to participating in the "early start" program that kicks off Saturday. Nevada’s cities and counties have taken different tacks on their approach to adult use of pot — some municipalities have declared an all-out moratorium on recreational sales, while some aren’t quite ready and others are welcoming the new business with open arms — for a hefty fee.

Despite the many hoops they had to jump through, dispensary owners are for the most part eagerly counting down the hours until recreational sales begin. Nevada Dispensary Association Executive Director Riana Durrett on Thursday thanked state tax officials for working “diligently and tirelessly” to get the necessary regulations in place before sales start.

Jurisdictions took divergent approaches toward recreational marijuana fees, ranging from no special permit or fees required for dispensaries out in rural Mesquite to a fee that would add up to $75,000 a year for dispensaries in Reno.

Costs set by local governments come in addition to the $25,000 in application and license fees required from existing medical dispensaries by state tax officials, who also approved a bevy of other regulations and requirements ahead of the July start date.

Here’s a look at where local areas are ahead of the big day:

The state will allow Clark County up to 120 licenses for recreational, retail marijuana dispensaries, although only a fraction of that number are up and running yet and can take advantage of the early start program.

The Las Vegas City Council approved 12 special use permits on June 21 that allow existing medical marijuana stores to get in on recreational sales. That means any stores that receive their state license should be able to start their sales on July 1.

The dual use permits expire in April 2018.

Dispensaries in Las Vegas got a bargain on their fees. Those entering the recreational market only had to pay a $100 processing fee for their application.

City spokesman Jace Radke said renewal fees are likely to be the 3 percent of gross receipts -- the maximum allowed by the state -- but that hasn’t been codified.

There are four medical marijuana stores in North Las Vegas, and city officials expect all of them to be up and running with recreational sales on July 1.

Unlike the city of Las Vegas and unincorporated Clark County, dispensaries in North Las Vegas didn’t need to get a special use permit to launch recreational sales.

The city had previously approved a fee structure that requires dispensaries entering the recreational market to pay a one-time, nonrefundable business license application fee of $5,000. Beyond that, stores must pay a business license fee of 5 percent of gross revenue.

Lawmakers passed a bill capping such fees at 3 percent of gross receipts, which means the city will likely need to change its fee structure.

Henderson has five licensed and running medical marijuana dispensaries, but they won’t be allowed to sell recreational marijuana on July 1.

The city enacted a six-month moratorium in February that will expire on Aug. 7, although City Council members could choose to extend it if they want more time to consider business license fees and zoning parameters for such businesses. Businesses are allowed to proceed with ordinances on cultivation and production of edibles in the meantime, but city spokesman David Cherry said the council is likely to take up all marijuana-related ordinances at the same time.

Cherry said the city is planning to solicit feedback from businesses as they decide on a fee structure.

Still, the city is preparing for the effect of marijuana sales launching this weekend in nearby jurisdictions. Among other things, they’re warning residents and visitors not to drive under the influence of marijuana.

“Henderson police officers have been trained to understand what the law allows and how to determine when a violation is taking place and they will act accordingly,” Cherry said. “The city is hopeful that marijuana users will be respectful of the law and that they will exercise good judgement and not engage in unsafe behavior that could endanger lives.”

In total, Washoe County is allowed 20 retail dispensary licenses but doesn’t have that many stores up and running.

Washoe County hasn’t approved any recreational licenses for the three existing dispensaries in the unincorporated county -- two in Sun Valley and one in Incline Village. While it won’t launch sales July 1, county commissioners started a process June 13 to change county code to allow for it.

A first reading for the proposal before the County Commission is scheduled for July 11, and a second reading is set for July 25.

County spokeswoman Amy Ventetuolo says the timing was aimed at allowing elected officials, staff and residents to better understand the temporary recreational marijuana regulations that were approved by the Nevada Department of Taxation on May 8 as well as the new marijuana-related laws passed in the legislative session.

During the early start period, the county plans to charge recreational dispensaries the same as it charges other businesses — $75 for the application fee and the first year licensing fee through the term of the temporary license. It plans to review the fee structure for Phase II of recreational marijuana implementation.

All four of Reno’s medical marijuana dispensaries — Sierra Wellness Connection, Blum Reno, MYNT Cannabis Dispensary and The Dispensary —  applied for a license to open under the early start provisions. After months of deliberation, the Reno City Council voted June 14 to approve all four temporary licenses, which are valid through April 2018.

Dispensaries must pay the city a fee of $18,750 a quarter or $75,000 a year -- the highest license fee of any business category. The city will likely have to adjust its fee schedule because it would mean dispensaries that don’t make at least $2.5 million in gross receipts a year would be paying more than the statewide 3 percent fee cap.

There’s no formal moratorium on recreational sales in the City of Sparks, but sales won’t be starting on July 1 because the council hasn’t made final decisions on permitting stores.

Assistant City Manager Neil Krutz said the city did decide this week that if recreational stores get up and running, they should pay a business license fee equal to 3 percent of gross receipts — the maximum allowed by state law.

The potential code changes are up for consideration on July 10, and Kurtz said it’s possible licenses could be issued by the end of that same week. The slower start-up time has to do with the city’s code amendment process, which is different than that of Reno, for example.

Ahead of Nevada’s early start, Krutz said the city had contacted its counterparts in Colorado and Washington to learn how they prepared for the launch of recreational sales.

Carson City is eligible for up to four recreational marijuana licenses. There are two medical marijuana dispensaries open in Carson City — Rise and Sierra Wellness Connection — but they won’t be selling on July 1.

The city has imposed a moratorium on recreational marijuana sales that’s expected to last through Sept. 19, but could be extended.

The tiny town of Mesquite — roughly 80 miles from Las Vegas and on the Arizona border — says it fully expects the community’s only medical marijuana facility to start recreational sales on July 1.

Nye County only has one medical marijuana dispensary going, but it has the green light to start selling recreational marijuana on July 1.

The county, which has authority over the Town of Pahrump, approved regulations in May that allow recreational sales.

Businesses seeking to sell recreational marijuana must pay a nonrefundable $5,000 initial fee to apply for a license, and would have to kick in another $15,000 if the county approved them.

In subsequent years, marijuana stores would pay $2,500 to apply for renewal, and kick in an additional $7,500 if they were approved for renewal.

Because it wasn’t operational by the end of May, it won’t be able to apply for a recreational marijuana license this time around that would allow it to sell by July 1. Regulations approved by the Nevada Tax Commission allow for an additional application window in the early start program, although no timeframe has been set.

Outside of the Reno and Las Vegas areas, rural Nevada residents generally won’t be able to join in the recreational festivities on July 1, even though each rural county with fewer than 55,000 people is technically eligible for two recreational dispensary licenses.

Question 2 does not explicitly allow local jurisdictions to bar recreational marijuana facilities, but many counties have simply either passed moratoriums against medical dispensaries or haven’t approved zoning ordinances for marijuana-related businesses. Most of the rural counties don’t have medical marijuana dispensaries up and running that would qualify them for the early start program.

Lyon County manager Jeff Page said that he’s instructed his staff to look at changing some of the county’s ordinances barring medical dispensaries after being approached by a number of growers looking at relocating to the area. Any ordinance change would need to be approved by the County Commission.

The Douglas County Commission voted in April to bar all marijuana establishments, according to the Sierra Sun.

Elko County has a temporary ban on medical marijuana facilities extending into 2018, but the tiny border town of West Wendover is in the process of drafting a medical marijuana ordinance, with a final vote of approval expected in late July or early August.

Jackie Valley contributed to this story.