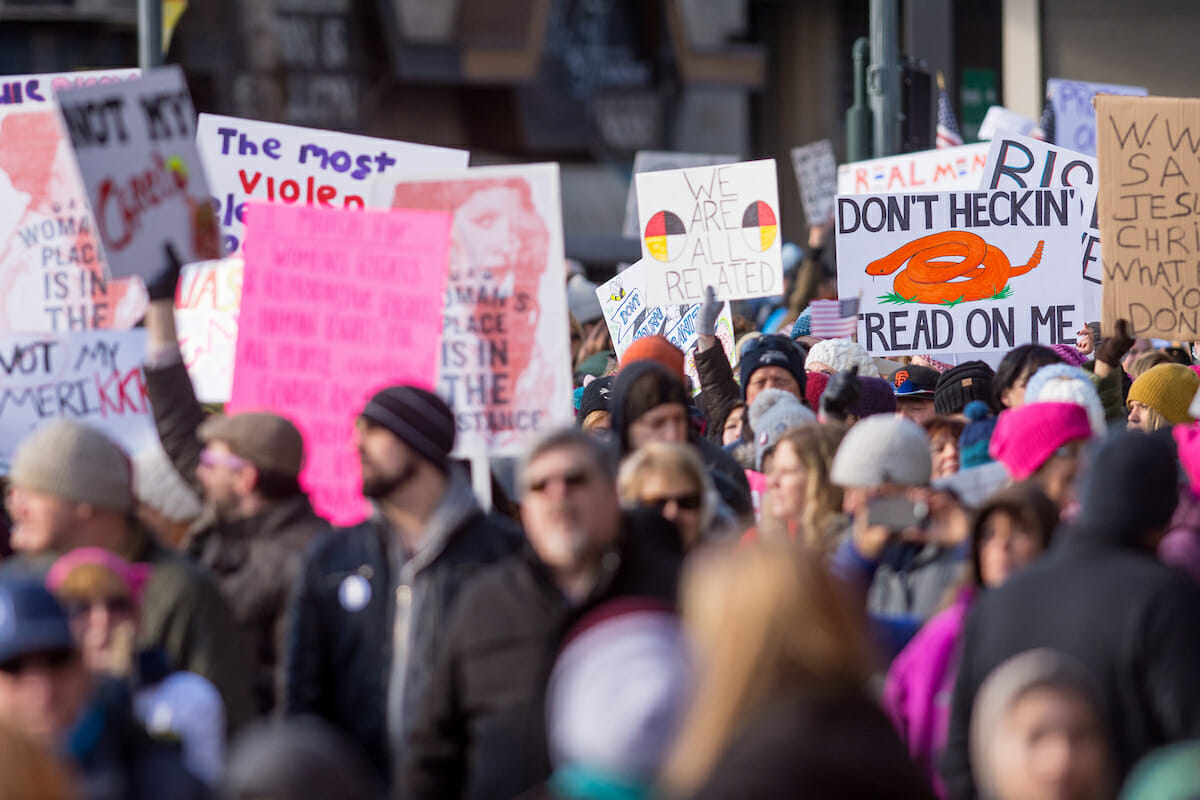 On January 21st the Women’s March on Washington made history as one of the largest in our country’s history, channeling the passions and beliefs of over 2 million people across our country into a surging river of activists, marching to be heard and to inspire. And the marchers were heard, and they did inspire.

We Nevadans expected to see 2,000 marchers in Las Vegas. As reported by NPR, we saw 15,000. In Reno, they expected to yield a few hundred. By the day of the March, 3,000 had signed up on the event's Facebook page. And then more than ten thousand showed up.

There is no better time to ask -- and try to answer -- these questions than the first day of Women's History Month.

State Sen. Pat Spearman is newly engaged in taking a symbolic, but important foundational step, answering the call to action. She has advanced a resolution that could make Nevada a leader in catalyzing women’s rights by ratifying the Equal Rights Amendment. (It is expected to be voted out of the Senate today.) The ERA failed to become a constitutional amendment in 1982 when it was unable to garner the last three states votes needed to enact its passage by the deadline.

What Spearman is proposing would make Nevada the first state since 1982 to ratify this legislation--at long last moving our country towards law that would, once and for all, enshrine women's rights in the Constitution--thereby making it clear that all men, and women, are indeed created equal.

But what can the “average” woman do? (And is there such a thing?) We need to support Sen. Spearman, and we need to galvanize ourselves and others to remain engaged in the issues we care about as women.

To frame the possibilities, it’s worth considering that Nevada is home to 2.9 million people, just under half of whom are female. That means, fellow women of Nevada, that we have more than 1.4 million sisters, mothers, daughters and girlfriends living alongside us. Perhaps, like me, many are transplants. We followed our parents, a dream, a job -- or a man -- to the Silver State. We planted our roots, and we grew.

But how we are doing at this moment in time is a matter of some debate. A blog post by The Guinn Center for Policy Priorities showed Nevada ranked near last in many measures of women’s well-being -- especially on social issues such as health care and safety. On the other hand, the Center for American Progress gives Nevada a “B” for female economic security, based on the fact that the wage gap and poverty rates for women are slightly lower for Nevada (relative to other states).  This is likely the result of the fact that 48 percent of resort and gaming industry employees are women, and that these jobs have generally transparent pay scales. Unfortunately, women of color do not fare as well in these measures, with far more black and Hispanic women living in poverty here and garnering lower wages than their white counterparts.

But, whether rich or poor, old or young, we are all adventuresses of a sort, treading new ground for ourselves and our families by our mere presence here in the once Wild West. We are also likely (and simultaneously) shouldering the time-worn, universal duties that women around the world carry daily. We not only often work a job outside the home, we also manage our homes, our children, our parents, and our husbands.

In light of these responsibilities, we also have a duty, one that is more global, more elemental:  to be engaged in efforts to change things for the better in our communities, our state, our nation. Whatever our beliefs, whatever our political party, whatever our cultural background or personal backstory, the weight of who we are needs to be brought to the scales of justice and set firmly on the side of good.

And anyone who has ever tangled with a woman knows just one can be a mighty force to be reckoned with. So what about a whole roomful of women? Or even one-tenth of the women in a city? Or a state? That’s a force of nature waiting to take things by storm.

Engage in the Halls of Political Power

The newly formed bipartisan Women’s Caucus at the Legislature aims to be just that -- a force of nature -- in lawmaking and policy shaping that benefits Nevada’s women and children. Women from all walks of life should seek to inform and support their efforts, to tap into their power to advance the issues we care about. The Nevada Legislature is a bright spot in the nation when it comes to the ratio of women:  we have a much higher proportion of female lawmakers representing us in the Assembly and Senate than the average (40 percent vs. an average of just 24 percent in state legislatures nationwide).

In the judicial branch, two out of the seven Nevada Supreme Court justices are women, and one out of the three Nevada Court of Appeals justices are women as well. This is promising as women make up 36% of the legal profession nationwide according to the American Bar Association, therefore making Nevada a fairly accurate reflection of the numbers of women that practice law at the judicial level.

Engage in the Channels of Commerce & Money, Board Rooms, and Workplace

Money is power. And the private sector in Nevada, by contrast, remains largely a men’s club. We need to empower ourselves and other women to secure good employment and positions of authority. While 48 percent of all resort and gaming industry employees are women, there are no female CEOs. Seeing this vacuum, former Isle of Capri Casinos CEO Virginia McDowell retired in April of 2016 in order to run Global Gaming Women, a nonprofit that mentors emerging female resort and gaming leaders in order to increase the number of female executives in the industry.

Another measure of female participation in the business sector is their representation on boards of directors. The number of women on boards is sparse at Nevada’s biggest companies, although strides are being made. Deloitte’s 2015 survey of executive board diversity nation-wide found that women made up only 12 percent of directors and 4 percent of board chairs. This despite the fact that organizations such as Catalyst have found that companies with more female board members tend to have better financial performance.

The five biggest private employers in Nevada range from zero females to 30 percent on their boards -- and many of those have only one woman. Executive positions held by women in the biggest economic powers in the state--the resort and gaming industry, finance and banking, mining and real estate development--are disproportionately few, and women occupying important positions of thought leadership -- academics, nonprofit heads -- are also typically underrepresented.

In all of these domains, we can help each in a number of ways:  by doing our homework, speaking up with informed opinions, modeling civil discourse on issues -- even when we disagree -- and standing up for one another. What woman hasn’t been condescended to, interrupted, or talked over by a man in a meeting? What woman hasn’t presented an idea, only to have it ignored and then subsequently appropriated (i.e. rephrased) by a man, such that it suddenly seems like newly minted genius? What woman hasn’t realized she is so little regarded that she wasn’t even invited to a male-dominated decision-making meeting or meet-up?

Engage Where You Are

Women are speaking up in a many settings. I recently was told about a female chief financial officer for a Fortune 500 company who was pitched by a leading Wall Street bank for a major piece of investment banking business. She listened, and did her homework. And at the end of the meeting she pulled the senior managing director on the six-person team aside and civilly said, “Don’t ever come here again without a single woman on your side of the table.” Women investors are now asking how many women are on a company’s board, or what the company’s maternity and equal pay policies are--before they buy the stock.

In smaller settings, some women are dedicating themselves to helping other women be heard as part of their everyday work practice through “amplification.” This is a meeting strategy where when a woman makes a key point in a discussion, the other women present repeat it, giving credit to its author. This ensures that the idea is heard, and ensures credit cannot be given to someone else. This tactic can and could be deployed in any setting.

Whether you are a liberal feminist, a libertarian conservative, or something in between, it is important to remember that what we have in common can and should erase the hard lines that divide us culturally or socio-economically. Much more unites us than separates us, if we choose to see it. Our grandmothers (and some of our grandfathers!) struggled to give us the right to vote, the right to work, the right to own our own property, and the right to make our own financial decisions. We need to keep these noble ideals alive and actionable, and we need to amplify them for women who have not yet achieved full freedom and autonomy in their lives.

We need to hear what you care about, and what support, and what information you need to fully engage:

Here are the top five things I see that matter to all of the women in my life:

But what are your top issues? We want to cover them. What information do you want in order to be fully informed? What resources or support do you need to make your voice heard? We want to help meet women where they are, and help them fully engage.

I hope the women who read this will be inspired to find a cause, speak up, and take action.

Heather Murren is a former Wall Street analyst who has served on two presidential commissions. She wants to hear your feedback to this column and so do we. Make a comment below or we'd love for you to submit an op-ed at submissions@thenvindy.com.