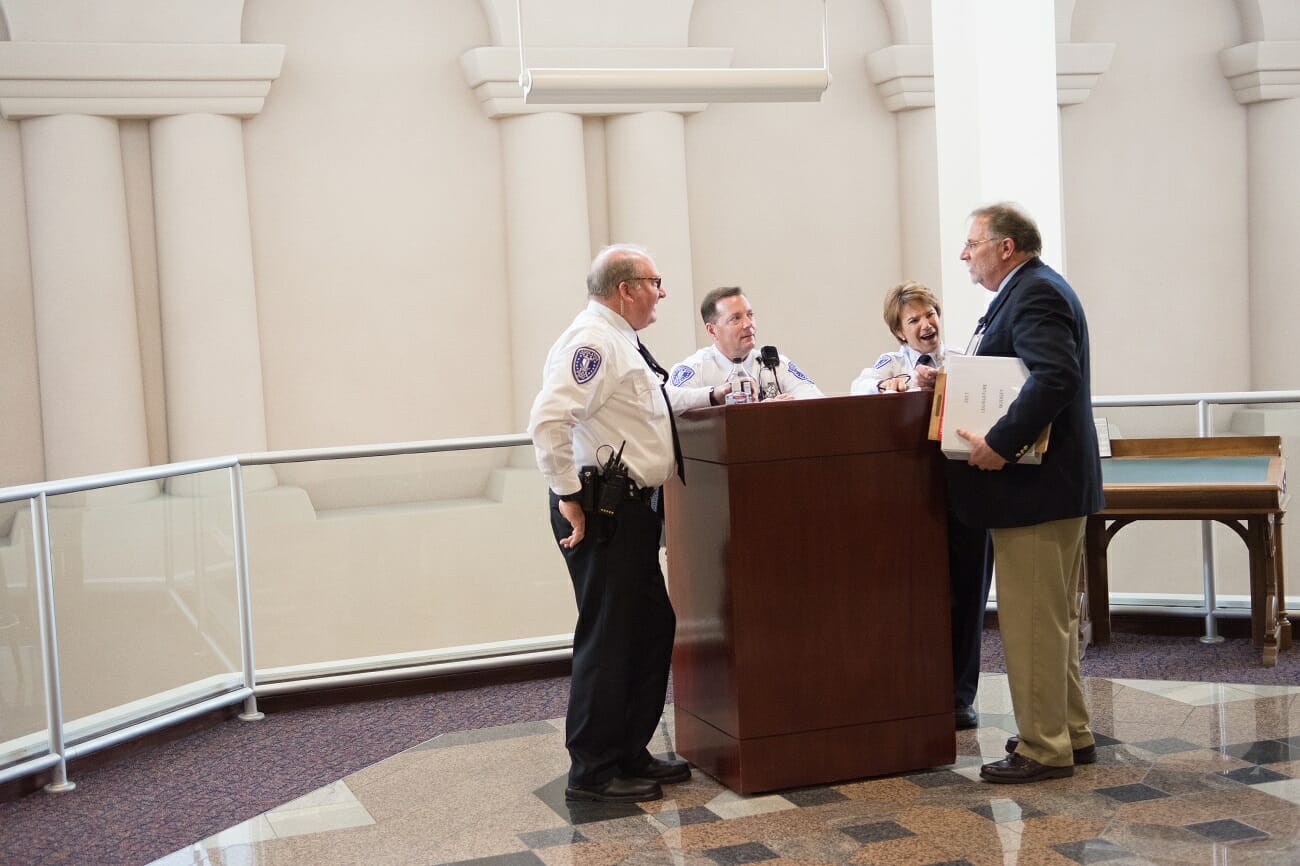 Compared to the courts, county commission chambers and airports, security at the Nevada Legislature can seem somewhat lax.

Though armed police are stationed at public entrances and exits, there are no metal detectors,  bag checks or body searches required to get into the building.

Legislative staff are trying to balance the openness of a part-time citizen legislature with the security concerns percolating in the wake of mass shootings in Orlando and San Bernardino, as well as the cost of equipment and staff to man a building that’s busy for six months every two years.

In an October memorandum sent to members of the interim Legislative Commission, Combs recommended cutting down on emergency door access, installing alarms and card readers on those doors and more strictly enforcing requirements that legislative staff, lobbyists and members of the press wear identification badges and update their photos.

While in the past legislators and anyone with a proximity card could easily enter and exit side doors, Combs recommended that lawmakers restrict access to those doors only for actual emergencies, and not for quick escape routes from waiting lobbyists or reporters.

Republican Sen. Ben Kieckhefer, who voted for Combs’s recommendations, said the changes were minor and worth the hassle.

“I didn’t want to be in a situation where something bad happened in this building and it was said we didn’t do anything to make a more safe environment,” he said. “The steps that we took I think were incredibly reasonable and fairly modest in that direction.”

Combs said he didn’t want to speak publicly about some of the other security measures staff would take because they didn’t want to tip off the bad guys.

He and legislators raised the possibility of implementing metal detectors or x-rays, but installing them would raise costs considerably and possibly require a renovation to the legislative building.

He said the back of the Legislature wasn’t designed to fit enough metal detectors under the current floor plan, and an extension could cost between $1.5 and $2 million. A remodel of the existing building would cost less — roughly $500,000 — but would place the security area further inside the building and take up staff office space. Additionally, legislators would need to approve equipment costs — about $45,000 for each metal detector and X-ray machine — and the staff to man the equipment  — approximately $700,000 per year.

There’s also the concern that heavy screening could cause bottlenecks at the building entrance, force people to wait outside in the elements while others get checked, and generally kill the small-state, accessible vibe of the Nevada Legislature.

“I think that there’s a question that’s been brought up constantly about this being the people’s house and the ability for everyone to feel comfortable coming to the building and I’m very appreciative of that,” said Democratic Assemblyman Mike Sprinkle. “Of course we all are concerned about our public safety, but I don’t know if that’s any different than the minute we step outside this building.”

Kieckhefer said he thought that the Legislature would eventually adopt stricter security measures like metal detectors, given growing concerns over acts of violence.

“It doesn’t restrict anyone’s ability to come in and petition their government,” he said. “So I think that it’s not an unreasonable level of safety for a building that sometimes drives emotions to high places.”

What the Legislature already has as protection is the Legislative Police, an independent force with nine permanent officers and additional hires during the session. Largely made up of retired law enforcement officers, it’s separate from marshals in the Supreme Court and the Capitol Police who protect the actual Capitol building, but the agencies coordinate with each other.

Legislative police are Category II peace officers— meaning they’re required to have more training than a correctional officer but less than a traditional police officer or trooper. While they must pass a physical and have guns and tasers, Combs said there hasn’t been any incident in his 4 ½ years as LCB chief where a gun was fired or a taser was deployed.

Republican Assemblyman James Oscarson said he doesn’t worry about his safety on a day-to-day basis in the building.

“I don’t. I don’t because I have full confidence in the folks that are charged with protecting us,” he said. “They’re everywhere you can possibly imagine. You see them in hallways, you see them everywhere, they’ve got other systems in place.”

Guns aren’t allowed in the building unless the holder has prior permission from the LCB director, according to signs posted at both entrances. But the state’s concealed carry law allows permit holders who are employed inside the building— such as lawmakers and staff — to have their weapons with them.

Combs said Nevada law prevents him from naming legislators with concealed carry permits, but at least six lawmakers this session have informed the LCB that they have permits and may be carrying a concealed weapon on the premises. At the start of last session, there were nine.

Kieckhefer said that security measures protecting legislators can only go so far, given that several of the most noteworthy security concerns over the last four years have come from elected officials themselves.

In 2013, Democratic Assemblyman Steven Brooks came to session shortly after his involuntary commitment to a psychiatric hospital and his arrest for threatening then-Assembly Speaker Marilyn Kirkpatrick. Police found ammunition and someone else’s gun in his car.

Brooks was eventually expelled from the Assembly and banned from the building by his colleagues, who said they felt responsible to prevent a tragedy.

“The other reality is that the most public and exposed security threat that may have existed in this building in recent years was from a legislator,” he said. “So I think what’s good for the goose tends to be good for the gander.”