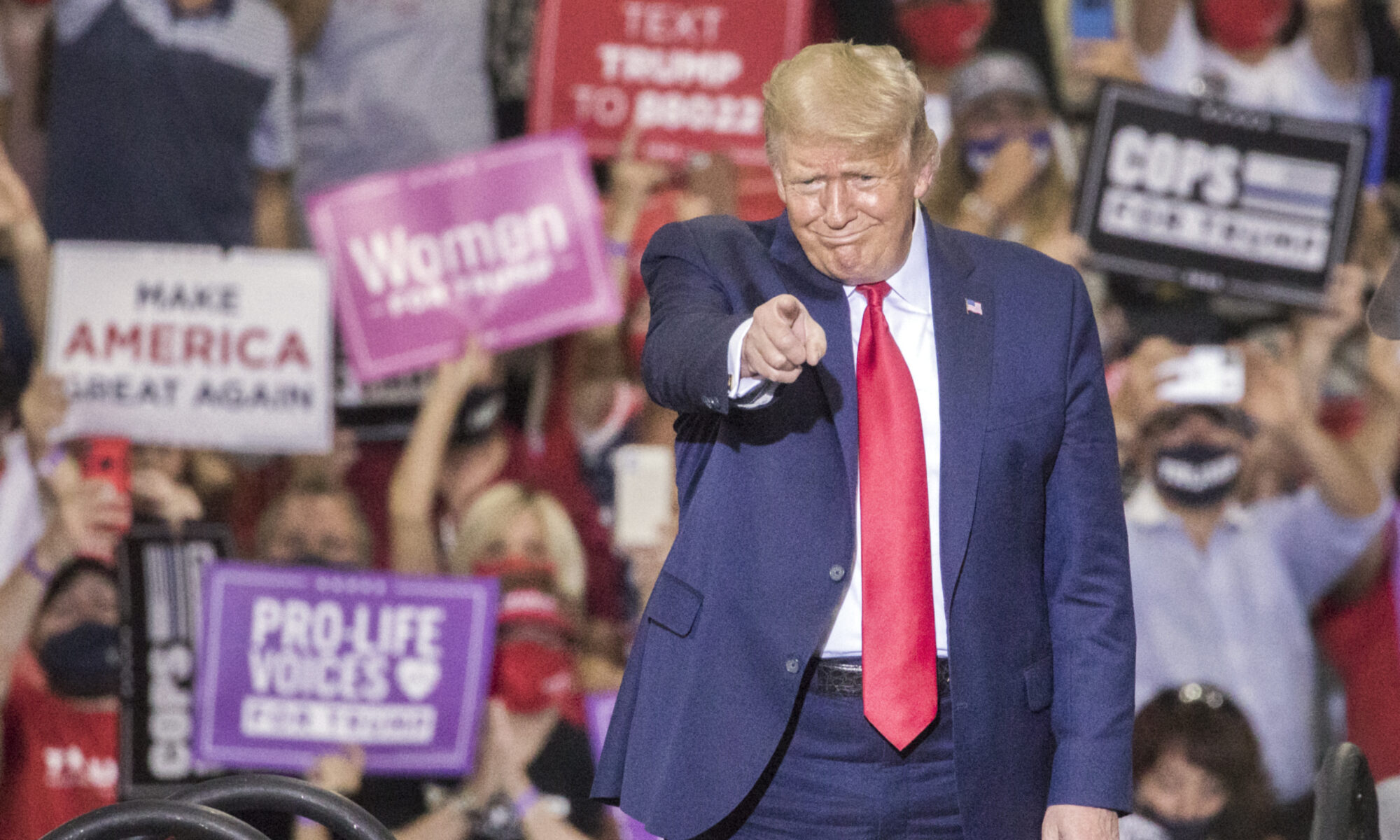 This week’s story of real estate mogul Donald Trump’s pen pal relationship with former President Richard Nixon in the 1980s was lost in the avalanche of press over President Trump’s campaign to undermine the upcoming election.

While touting mail-in balloting for Florida, Trump continues to smear other states’ efforts to provide safe voter access during the coronavirus pandemic that has taken more than 200,000 American lives. Flying in the face of the fact that American elections have few incidents of voter fraud, Trump’s refusal to agree to a peaceful transfer of power makes Nixon’s infamous rants appear almost quaint by comparison.

“We’ll want to have – get rid of the ballots and you’ll have a very – we’ll have a very peaceful – there won’t be a transfer, frankly. There’ll be a continuation,” he told the White House press pool. For Trump, sowing the seeds of election conspiracy and predicting violent insurrection have become almost daily talking points.

Mussolini would be proud, but do you suppose Nixon would approve?

By the time they began exchanging letters in the early 1980s, Trump was a rising star on the New York real estate scene and had a growing influence in the Atlantic City casino business. Nixon was accomplishing something few imagined was possible after his ignominious 1974 resignation as president: He was improving his public image and mounting what amounted to a comeback, at least in some circles.

The letter exchanges between future President Trump and past President Nixon have been made public as part of an exhibit that opened Thursday at the Richard Nixon Presidential Library and Museum in Yorba Linda, Calif. The missives cover a range of topics, according to published reports, and Trump makes no secret of his admiration for the disgraced president. The Associated Press described the tone of the two men’s letters as “something of an exercise in mutual affirmation.”

There was no need to wait for the exhibit to open, and not just because of Trump’s intimate relationship with creepy Roger Stone, the Nixon campaign aide who sports a Tricky Dick tattoo on his back. Trump’s Nixon infatuation is one more reminder, as if any more were needed, of our president’s thing for strongmen.

One of my favorite Nixon-Trump anecdotes is found in the largely forgotten book Trump: Surviving at the Top, an entertaining attempt to soften the blow of The Donald’s calamitous casino career and fizzling ventures into everything from the ownership of airlines to football teams.

As the king of all name-droppers, Trump through co-author Charles Leerhsen tells readers in present-tense journal fashion that he goes to dinner “with a few close friends at Le Cirque, one of New York’s hottest and most exclusive restaurants.” There he has something of an epiphany. In a room full of successful people “acting quite blasé about being in one another’s presence,” in walks Nixon and his longtime bagman Bebe Rebozo. A hush falls over the room and important heads turn. The only thing missing is Bob Maheu and an envelope of cash from Howard Hughes.

“For a few long moments it seems as if nothing happens, and no one moves,” Trump writes. “The reaction, it seems to me, is a silent tribute to toughness.”

He then recounts a New York-bound flight on his private jet with Nixon and Barbara Walters following a Texas charity fundraiser. Nixon regales him with fascinating tales of world events and politics. Walters, eager to land an exclusive for her 20/20 show on ABC, repeatedly asks Nixon for an interview. After five attempts, and tired of being completely ignored, she finally gives up. What Trump didn’t know was ABC was preparing to broadcast The Final Days, a series based on Bob Woodward and Carl Bernstein’s book that detailed the reckoning of Nixon’s White House tapes and the impeachment trial that led to the president’s resignation.

Trump, ever the laughably revisionist historian, calls the miniseries a “not-very-flattering look at the end of the presidency.” Yes, and Nero fiddled by the campfire.

Trump admires Nixon’s refusal to acknowledge Walters’ repeated interview requests and enthuses, “I’ve seen some real killers in my line of work, but Richard Nixon makes them look like babies. The man is a rock, like him or not, and when you think of how far he’s come back and the things he’s endured, he’s even more amazing.”

That’s not typical Trumpian hyperbole, but genuine fanboy flattery of the grandest order.

But there’s a big difference between Nixon and Trump. Nixon knew when to call it a day. He clearly sensed that not only was his own legacy at stake if he held on to the bitter end, but that his recalcitrance was putting the nation in an even darker place.

Trump is no Nixon. He lacks Nixon’s strength of character and sense of history. By leaving office, even ahead of the certainty of his own removal, Nixon showed an understanding not only of the game, but of the reality that in America, given enough time, comebacks are possible.

Trump appears destined to continue his Mussolini impersonation no matter how much it hardens the soul of the nation.