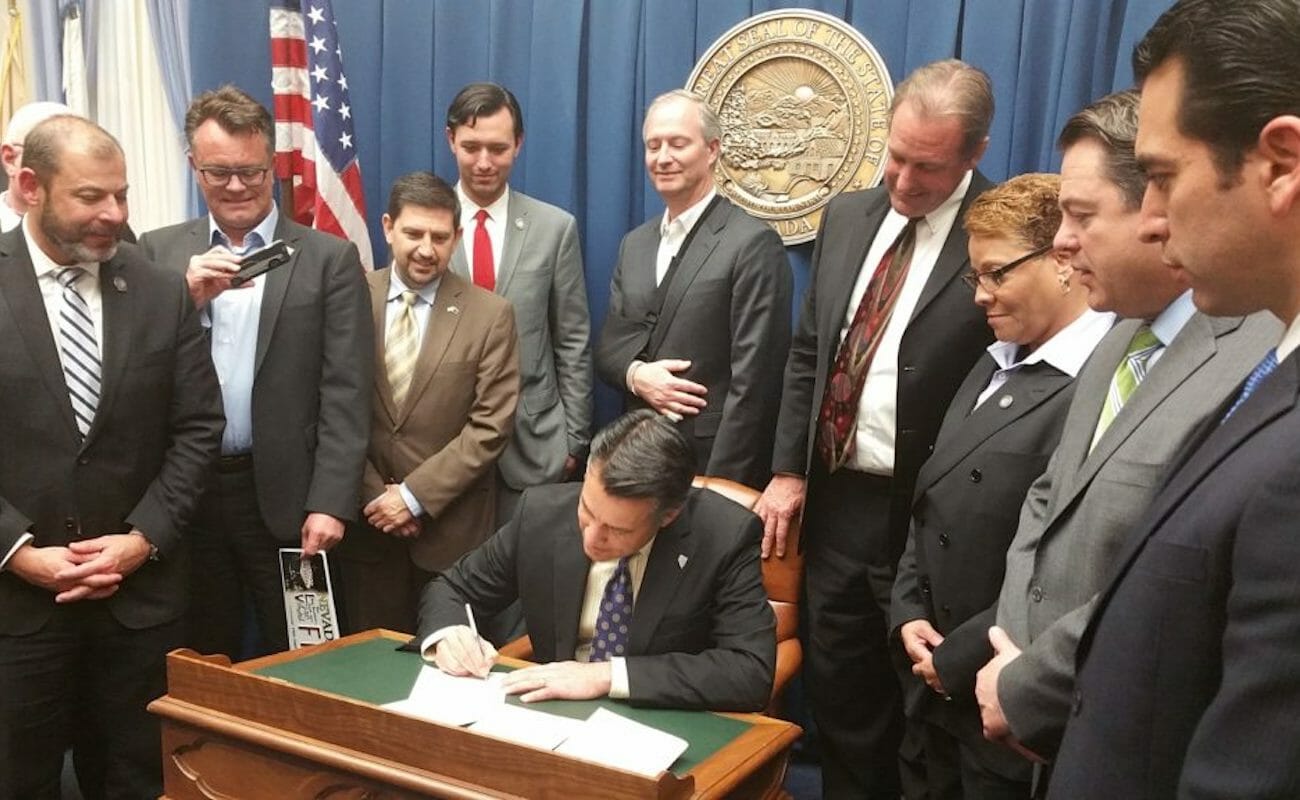 As he prepares to give his fourth and final State of the State address, Gov. Brian Sandoval plans to emphasize where Nevada was when he was elected, how much progress has been made and how much more there is to do.

Sandoval, in an exclusive interview with The Nevada Independent on the eve of the speech, hinted that he will not propose anything close to as bold as his 2015 speech, but that he does not plan to coast through his legacy session.

“This isn’t a stand pat, play it safe State of the State.  It is, again, my plan for the next two years to invest where I think we need to invest in terms of strengthening the state.”

“Invest” is often code for “tax” in governorspeak, but no one expects the governor to propose anything more than what his chief of staff Mike Willden called “budget-balancing strategies” – i.e. shifting of monies.

Sandoval, obviously loathe to give away specifics, nevertheless made it clear during the interview what will not be in the address, expected to be less than 60 minutes and feature a retrospective of what he sees as his greatest achievements during the last six years.

The governor, not surprisingly, seemed unwilling to budge (at least for now) on his support for universal Education Savings Accounts and vowed to protect the reforms he signed last session when Republicans controlled both houses. With legislative control now flipped in both houses, Sandoval still retains the upper hand because of his veto pen and willingness to hang around Carson City all summer (he lives here) if special sessions are needed during the negotiations over the budget and key policy issues.

Sandoval has excellent relationships with incoming Speaker Jason Frierson – they worked together in the attorney general’s office more than a decade ago – and Senate Majority Leader Aaron Ford, whom the governor dealt with last session. But those relationships will be tested during a Legislature where the executive branch’s agenda may not be as expansive as 2015 and may be more defensive, too, with the overall schema being the Democrats trying to roll back what they see as ideological defeats and Sandoval viewed as needed reforms.

The governor obviously is very proud of reducing the state’s extraordinary reliance on gaming and construction, although he acknowledged the economy is still driven primarily by tourism. He defended the potential Faraday Future flop, but actually gave a cannot “confirm or deny” answer when I asked him about rumblings that Facebook and Google are about to make large investments here.

Here’s some of what Sandoval said on key policy debates during a wide-ranging hourlong interview in his office, with Willden and spokeswoman Mari St. Martin sitting nearby:

Some insiders have speculated that Sandoval will eventually settle on means-testing ESAs to get Democratic sign-off. But he wasn’t giving up much on an issue he obviously believes in – the governor reminded me he proposed school choice bills in 2011 and 2013 (that went nowhere).

“You know I still have a daughter in middle school, now, and I’ve had kids in private and public school, but that’s part of is to give parents a decision to be able to send their kids where they feel they can be best educated,” he replied. “You know, what’s wrong with that?  There was always that argument, ‘Well we can’t do this because we’ve underfunded public education.”  But now, we’ve invested hundreds of millions of additional dollars into the public schools and so it is an even playing field.'"

Sandoval said he still believes school choice should be universal, as the landmark law whose funding mechanism, subsequently struck down by the state Supreme Court, mandated. So what would he be willing to compromise on?

“Well why would I tell you… what I’m willing or not willing to do now?” he retorted.

Sandoval said he has “no regrets” about enacting the first substantial change to the state’s tax structure in decades and pointed out it is “performing as we expected it to.” (It has come fairly close to hitting its projections so far, Willden pointed out.)

“It is, at least the feedback that we've gotten is, that it isn't as bad as people thought it was going to be,” Sandoval said. “I think that people feel good about the money that was raised for that and what it has done for our education system. “

Sandoval said the only complaints about the new tax, which only affects businesses with $4 million in annual revenue, continue to come from car dealers. So if it’s working well, does it need to be expanded?

“No,” Sandoval said, suggesting if the nose is under the tent, it will not be extended further in 2017.

Sandoval recently wrote a letter to House leaders in plaintive terms asking them not to allow what he told me would be a “massive” impact on 400,000 Nevadans to occur. Sandoval opposed The Affordable Care Act but expanded Medicaid, as many governors, most of them Democrats, did.

Sandoval cited statistics showing the state had fallen dramatically in uninsured rates from first or second in the nation to the middle of the pack.

“Now, we're at about a 12 percent uninsured rate,” Sandoval said. “ But, for the kids, it's better than that – 8 percent….I can't say we're the most improved state, though we're one of the most improved.  The amount of money that has brought for the hospitals, I mean, what's that?”

Willden jumped in to say the law had increased the federal money from $1 billion to $2.7 billion. Sandoval said they had based his budget on the current law, but he and his team clearly are wary of the impact of what the incoming administration may do.

Although Sandoval previously had said he would shift his focus from K-12 to the university and community college system this session, the governor suggested Friday that there is not much to do.

“Higher ed (I don't think it's any secret) is going to be a topic, but it won't be (a focus) of my stay to the state…it won't be a reformational discussion.”

Sandoval was only too happy to detail the successes of his administration in this area, led by czar Steve Hill. He rattled off the expansion of autonomous vehicle technology here and the continuing activity at the Tesla Gigafactory. And, not surprisingly, he downplayed reports that Faraday Future may have no future at Apex.

“I think they're going to produce vehicles,” Sandoval said. “ It may not be as soon and as many as people want or hope for, but I think they're going to be producing vehicles.  Again, the worst thing that happens is Apex is developed, we have Hyperloop One that is the beneficiary of some of the improvements that have been made out there in terms of infrastructure, and they've made a public announcement that they're going to be doing all of their testing and construction there.  I mean, that's hundreds of billions of dollars of investment, so I said it during that session, this isn't just about Faraday.  This is as much or more about Apex, and having an equivalent of TRIC, the Tahoe Reno Industrial Center (where the gigafactory is).”

Sandoval chafed at being pitted against Treasurer Dan Schwartz, who has for months criticized the deal’s financing. He even has threatened not to sign the bonds for the project, which Sandoval rebuffed as legitimate.

“There's a bit of false narrative that he's created, that he's going to stop this,” he said. “It was already in the law that they were going to have to post that on, so that was nothing new.  I chair the Board of Finance, which is the entity that would approve the letting of the bonds.  Certainly he sits on it, but I am not going to approve those bonds unless I'm comfortable with the security that's been presented and how the company is moving forward.  So, we've always had that.”

Sandoval says he is focused on the session and not about his legacy, which is…. exactly what you would expect him to say. And even though he infuriated some on the right with his $1.5 billion tax increase, he backs away not a millimeter because, he says, the state has changed over the last few decades.

“The state was very different,” he said. “I mean, you didn't have the Internet, so we were collecting sales tax.  The state was one of only two and one for a very long time with gaming and a very thriving mining industry… times have changed.  And we have no income tax.  And, so you have this narrow tax base and a massive part of that tax base, the gaming, was being narrowed as well.”

So, the governor argued, sometimes “you have to go against the grain of ideology.”

“In my heart, I'm a fiscal conservative even though I raised a tax,” he said. “ But we had to do it.  We had the narrowest tax base in the country.  We needed to invest in education in this state.  So, I made an incredibly difficult decision, but what I felt was in the best interest of the state.  Would I have preferred to not have to do that?  The next governor's not going to have to do that.”