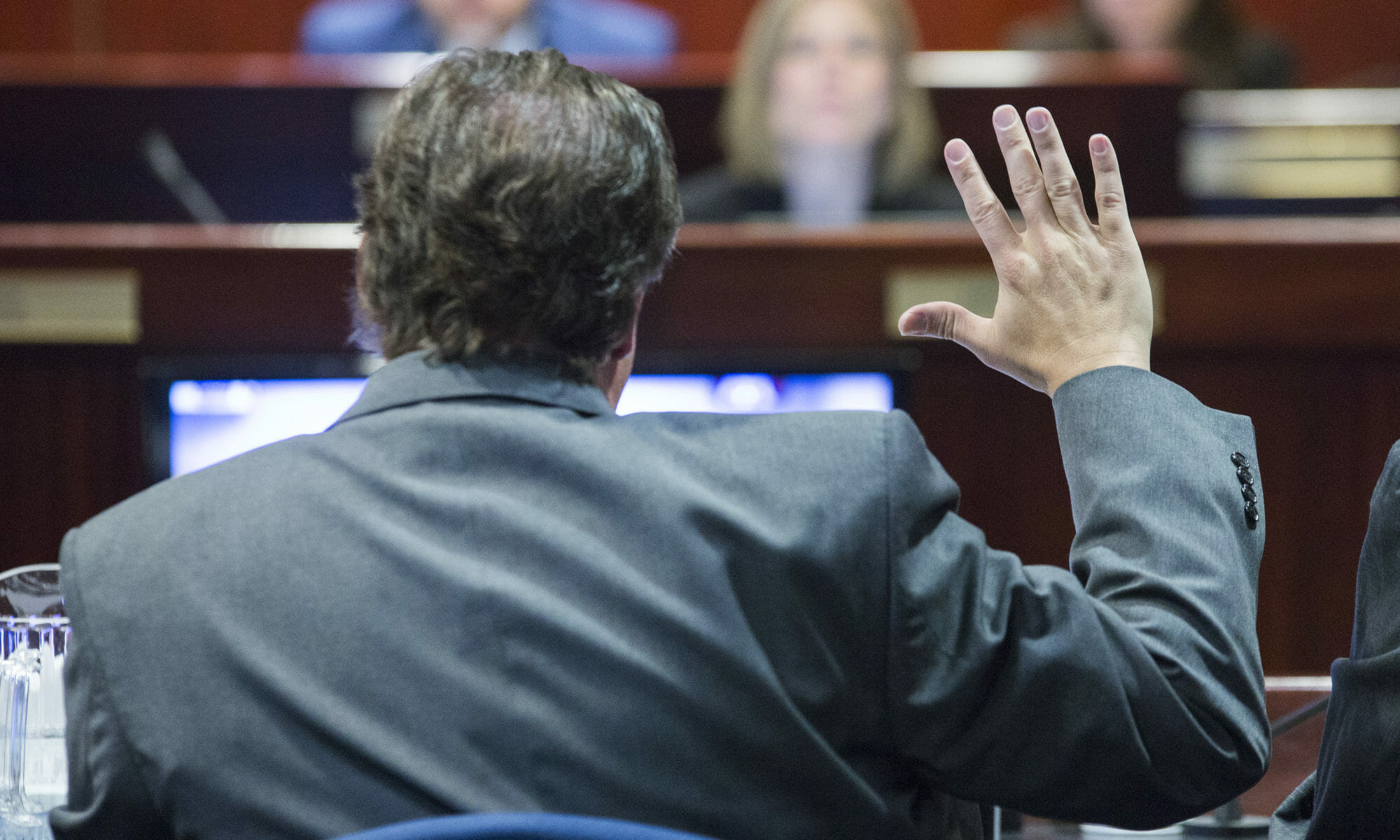 A legislative meeting that began Thursday with a politically charged, dramatic swearing-in of witnesses turned anticlimactic when lawmakers sought compromise with the Clark County School District regarding the massive reorganization plan.

As the nation’s fifth-largest school district moves full speed ahead to create a school-centric organizational structure, bolstered by a restructured funding formula that could cost $1.2 billion if implemented statewide, committee members who crafted the state-mandated plan expressed a willingness to at least consider tweaking portions of it.

The ultimately productive nature of the meeting, however, wasn’t immediately clear at the outset: Republican Sen. Michael Roberson, who chairs the legislative committee, requested that all speakers be sworn in under oath to testify — a practice not common at these type of meetings.

“My trepidation was, when we heard about the whole swearing-in thing, that it might be more contentious,” said School Board President Deanna Wright, who was pleasantly surprised that productive dialogue ensued. “I really felt like it was more in the tone of ‘let’s talk about the issues.’”

Roberson said legislative legal counsel recommended administering the oath, but he declined to elaborate further after the meeting.

Tensions between the legislative committee and school district officials have mounted in recent months because of the ambitious reorganization plan, which the district must implement by the beginning of the next academic year. School trustees, in particular, have voiced numerous concerns about the reorganization and filed a lawsuit in December seeking a preliminary injunction.

Kevin Powers, the LCB’s chief litigation counsel, testified Thursday and said the trustees’ lawsuit doesn’t have a “reasonable likelihood of success” in court based on the bureau’s research. The lawsuit alleges the legislative committee exceeded the authority granted to it and that the reorganization plan is an unfunded mandate, among other claims.

The testimony irked Sen. Majority Leader Aaron Ford, a Democrat who sits on the committee. He called it a “highly inappropriate” conversation given the pending litigation.

“This litigation hopefully is going to come to a cessation pretty soon — either because it’s settled or because the court is going to make a determination,” he said. “I do not think it appropriate for us to be having this conversation in public, on the record while litigation is pending over legislation we have passed.”

Roberson defended his decision to solicit the LCB’s legal opinion because of the “cloud of uncertainty” he said has been hanging over the reorganization effort.

Even so, Superintendent Pat Skorkowsky said the district is “moving at the speed of light” to reorganize the district by next school year. The newly minted school organizational teams (SOTs) — made up of parents, principals and staff members — have begun meeting to make budgeting decisions.

A sticking point has been the much-discussed weighted student funding formula, which would allot more per-pupil dollars to special education students, children living in poverty, gifted students and students whose primary language is not English. Not all the weights have not been formally established, nor does the district have the money to implement them, Skorkowsky said.

The regulation to reorganize the district calls for the use of a weighted funding formula, but State Superintendent Steve Canavero indicated a willingness Thursday to allow the school district to proceed without full implementation of the formula. The district could seek a “variance” with the state on that issue, Canavero said.

That fix wouldn’t solve the looming funding issue, though.

Skorkowsky said the district ran a simulation using estimated weights and discovered wide disparities in how it might affect schools. Under the simulation, the higher-performing Coronado High School stood to lose roughly $1.4 million, while the lower-performing Eldorado High School could have gained $1 million.

The district doesn’t want to create winners and losers under the new formula and risk jeopardizing student outcomes at those higher-performing schools. “That’s why we keep pushing for the additional funding,” Skorkowsky said.

The magic number to fully implement a weighted funding formula in Clark County? More than $600 million.

It would take roughly $1.2 billion to do so statewide, Canavero said.

District officials and multiple advocacy groups have been pushing Nevada lawmakers to tackle the problem during this year’s legislative session, which kicks off Monday. Roberson noted that reaching that billion-dollar sum will take time and shouldn’t be viewed as a reason to halt the reorganization.

“I just don’t want to get off track here on whether we can do this reorganization based on whether we fully fund these weights,” he said. “I don’t think that is a valid point.”

Decentralization of some services remains unresolved

The district also is figuring out how it will reach the reorganization mandate of funneling 80 percent of unrestricted dollars to schools. In the midst of the decentralization effort, school officials encountered issues moving special education staff, custodians and computer technicians from a central services budget to individual school budgets, he said.

As a result, the district only has transferred about 73 percent of unrestricted funds to schools, Skorkowsky said.

Committee members and school officials batted around several fixes but didn’t settle on any specific solution. Roberson said this is the kind of dialogue that’s been needed all along to work through kinks in the reorganization regulation.

“I think we made a great deal of progress today,” he said after the meeting. “I am incredibly confident these issues can be resolved.”

Many of the problems can be fixed with “minor changes to language,” which could be accomplished in a relatively short period of time, Roberson said. The legislative committee likely will meet again in Carson City during the legislative session, but an exact date has not been set.

Caption: Pat Skorkowsky, Superintendent of the Clark County School District, is sworn in during the legislative advisory committee discussing the CCSD budget Thursday, Feb. 02, 2017, at the Grant Sawyer Building. Photo by Photoprizes LLC.