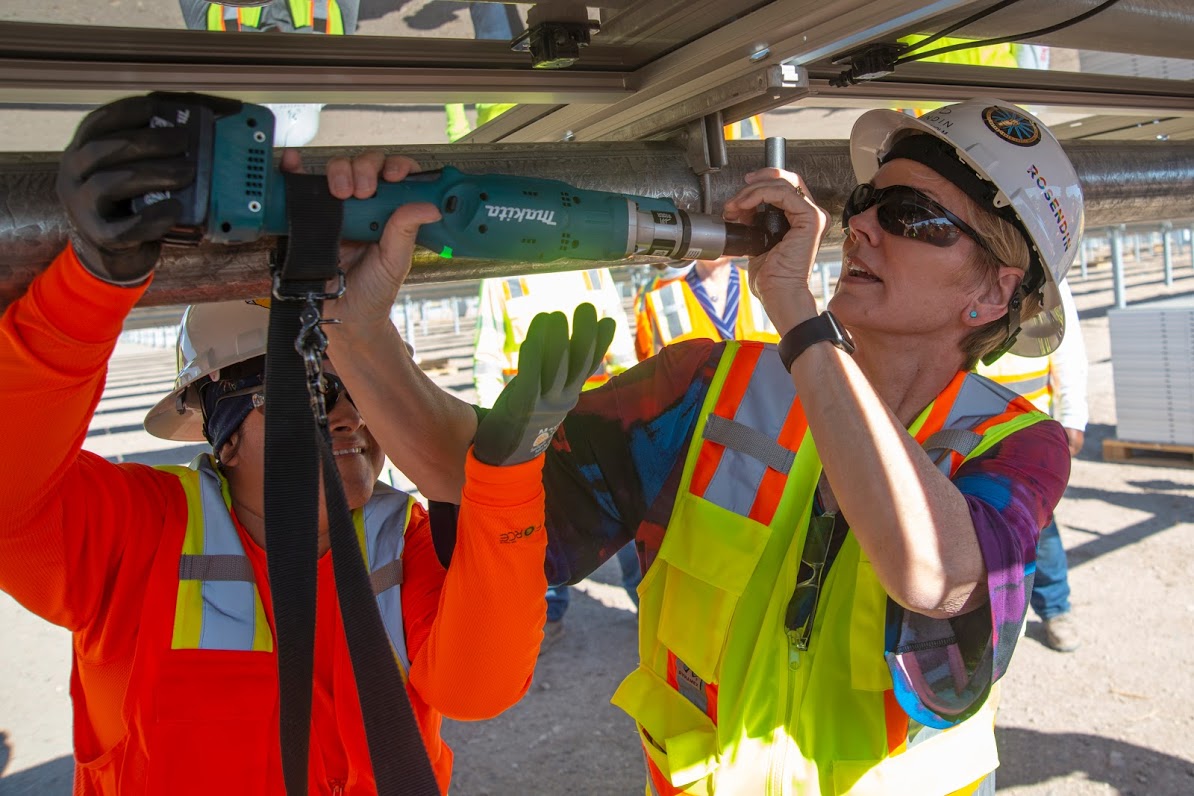 The roundtable was part of Granholm’s multi-state tour stumping for the Biden administration’s infrastructure plan and its efforts to speed up the energy transition.

And if there was a theme for the day, it was the economy and jobs.

Not long before the roundtable, Sisolak signed a massive energy infrastructure bill, SB448, at IBEW Local 357. The bill, dropped in the final weeks of the legislative session, focuses on NV Energy’s build-out of its Greenlink transmission line and the deployment of electric vehicles.

Granholm touted the bill, sponsored by Sen. Chris Brooks (D-Las Vegas), who participated in the roundtable with other renewable advocates. NV Energy CEO Doug Cannon was also there.

Other states Granholm has visited recently (Texas and West Virginia) have played central roles in producing fossil fuels: oil, gas and coal. But Nevada is in a different position. In Nevada, the fossil fuel industry is small compared to other states, where it has historically been a dominant and powerful political player.

In Granholm’s remarks, she recognized what Nevada’s economic development planners have said for years: When it comes to energy, the opportunity for Nevada is not in fossil fuels, but as an exporter of renewable energy across the West and a key player in the battery supply chain.

From Granholm’s perspective, Nevada has everything “soup to nuts.” She pointed to the ample land for solar projects, the Tesla Gigafactory, geothermal capacity and deposits for critical minerals.

“When I say ‘soup to nuts,’ Granholm said during an interview with The Nevada Independent on Friday, “that's really referring to the full supply chain of clean energy products that we should be building and manufacturing in this country, as well as installing and exporting.”

But doing that won’t necessarily be easy. New development in Nevada, from large-scale solar projects to mining, has, at times, faced opposition from Indigenous communities, conservation groups and local residents concerned with how projects could harm ecosystems and change the landscape.

In a brief interview Friday, as Granholm prepared to tour the Townsite solar project in Boulder City, she discussed some of the opportunities and challenges facing Nevada amid the push to place more renewables on public land and secure a domestic supply chain for the materials needed to produce electric cars.

On the need for domestic solar-panel production: Granholm stressed the importance of manufacturing solar panels in the United States, saying that “other countries have cornered the market on some of this, and we need to get it back.” She specifically singled out China, noting that President Biden had just delivered remarks concerning China’s use of forced labor.

“Nevada could be manufacturing solar panels, as well as installing them,” she said.

Land for utility-scale solar projects: Early into the interview, Granholm said that Nevada’s “comparative advantage is this massive amount of land that could be used to generate solar.”

Nevada is one of the least densely populated states, and about 85 percent of the state’s land is managed by federal agencies, from the Department of the Defense (military bases) to the U.S. Forest Service (national forests). Most of the utility-scale solar would likely be sited on land managed by the Department of Interior, specifically the U.S. Bureau of Land Management.

The bureau oversees about 65 percent of Nevada’s land — and they are often charged with permitting energy projects (solar, geothermal, wind, etc.). But the bureau must balance multiple (and often conflicting) activities: conservation, recreation, grazing, mining, etc.

Even with plans to prioritize energy development in low-impact areas, energy developers are still eyeing projects in sensitive areas. In Southern Nevada, projects have run into opposition over their impacts on imperiled species, such as the Mojave desert tortoise, recreation activities and sacred sites for Indigenous communities.

As a result, many environmental groups have called for better federal and state planning to direct projects into areas with fewer impacts. We asked Granholm about this and how she is working with the Department of Interior.

“Our team is actively working with her team to figure out how to do that,” she added. “What are the most optimal places we should be prioritizing? How do you streamline the permitting without jeopardizing the reviews that need to happen to ensure that you are protecting the resources?”

Granholm said lithium mining should have the support of Indigenous and local communities: The Energy Secretary’s visit came just days after the Biden administration released a report looking into the supply chain for electric vehicle batteries and other products needed to address climate change.

The report underscores the need for securing critical minerals both domestically and from allies. But as new mines are proposed in Nevada and across the American West, Indigenous leaders and conservation groups have raised serious concerns about how certain projects to extract key minerals, including copper and lithium, would irreparably harm the environment.

When thinking about where to permit mines, Granholm stressed the need for community buy-in.

“The view of the administration is that mining that is done here — in the U.S. — must be done responsibly, sustainably, and with the buy-in of local and indigenous groups,” she said.

Granholm said Indigenous communities who have been on the land for generations “have to be at the table” during mine planning. She said that companies could engage in partnerships, such as community development agreements, to direct benefits to Indigenous and local communities.

Granholm on the role of rooftop solar: NV Energy’s CEO was at the roundtable with Granholm on Thursday, and the Berkshire Hathaway-owned utility is playing a driving role in transitioning the state’s power sector away from fossil fuels.

But what about renewable energy infrastructure that is not owned directly by the utility?

We asked Granholm about “distributed energy resources,” a very technical (and dry) phrase for electric infrastructure that is installed on-site (think rooftop solar), rather than by the utility.

She said utility-scale and distributed generation are both “incredibly important pieces of the pie.”

Granholm noted that although the roundtable focused on NV Energy’s Greenlink transmission line (a utility-scale project), “there’s also a role for distributed transmission too — microgrids to help with resiliency — and certainly in more remote areas that are powered by solar.”

‘An earthquake in people’s sense of urgency:’ That’s a quote from The Arizona Republic’s piece about Lake Mead declining to its lowest level since the 1930s. “The lake's rapid decline has been outpacing projections from just a few months ago,” reporter Ian James wrote.

Saving the Salton Sea: The Desert Sun’s Mark Olalde published an excellent, in-depth story on the proposals to fix the issues in the Salton Sea by importing water from the Sea of Cortez.

Wildlife managers drop water for bighorn sheep: Review-Journal science reporting fellow Stephanie Castillo writes about the Nevada Department of Wildlife’s efforts to replenish water sources for bighorn sheep amid severe drought conditions. “We have had to haul water on an emergency basis, but not anywhere near approaching this magnitude, this scale of severity,” said one wildlife biologist for the agency.

Life on the edge in the Amargosa River Basin: The Amargosa River is a unique landscape that has carved out a biodiversity hotspot. But the climate change and groundwater overuse are adding new stresses to the area, as National Geographic’s Stefan Lovgren reports.

These visuals, compiled by the New York Times, show just how bad the drought is.

A Panasonic mining partnership: Neolith Energy, a venture from oil services company Schlumberger, is partnering with Panasonic on a lithium extraction project near Tonopah.

Thacker Pass mine work delayed, via Reuters’ Ernest Scheyder. And over the weekend, more than a hundred demonstrators, including many Indigenous leaders and advocates, gathered in Reno to protest the mine (photos from the Reno Gazette Journal).

Why does snow turn pink? The answer has to do with microalgae. But there is also an important feedback loop involving climate change — with implications for snowmelt. KUNR’s Noah Glick has more.

Coming up: The Clark County Lands Bill is getting a hearing in Congress.