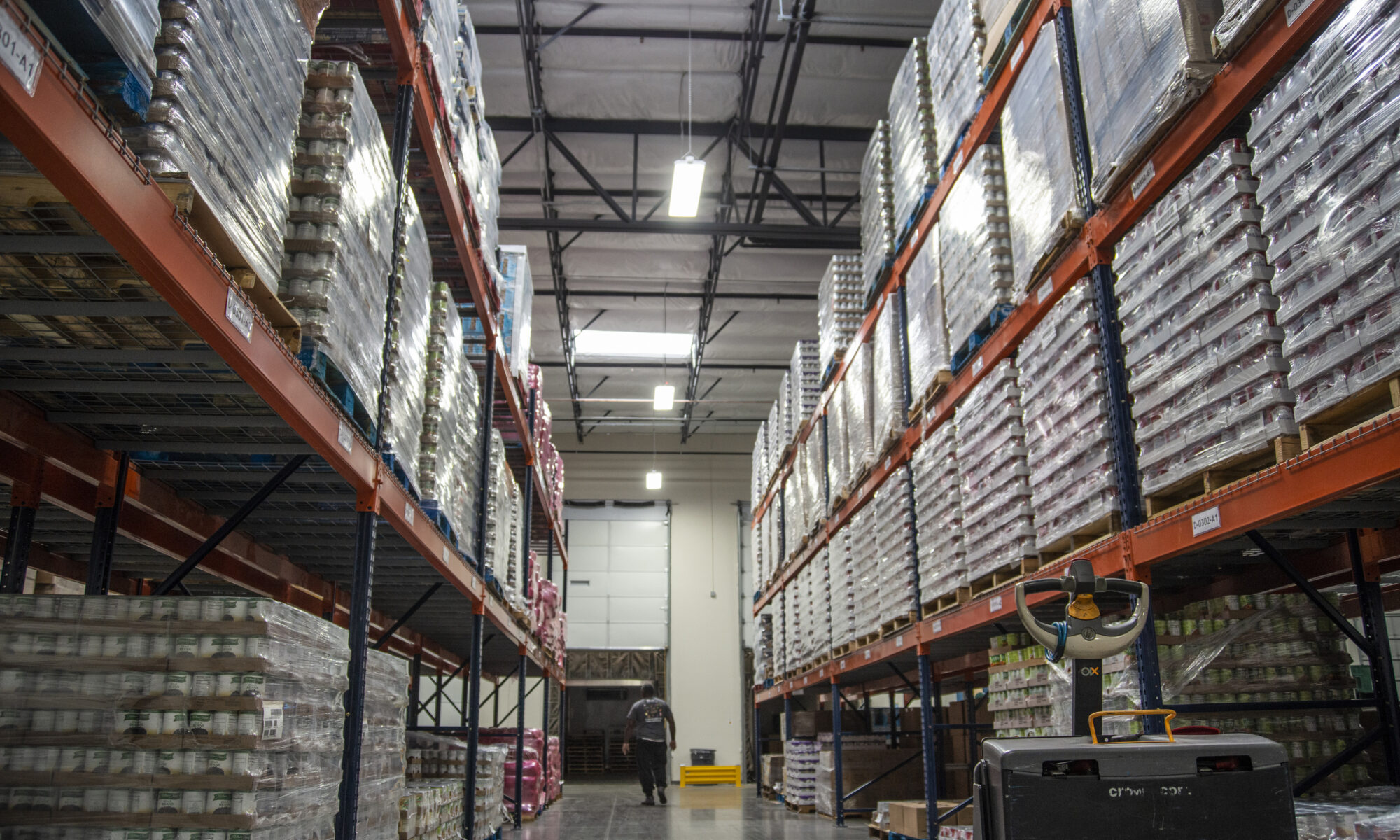 The orange and green walls of Three Square’s office space give way to fluorescent lights and the towering metal shelves of a warehouse, where workers in matching masks push pallets down aisles stacked floor to ceiling with green beans, granola bars, nutrition shakes and canned tomatoes — food that will feed thousands of Southern Nevadans.

The region’s primary food bank cut the ribbon Thursday on a new east campus site located in North Las Vegas. In addition to housing the organization’s call center and government affairs department, the site’s 14,000 square foot warehouse will allow the organization to expand programs that are facing growing demand, including senior hunger programs that will now have the capacity to serve up to 20,000 older adults in Southern Nevada.

“The challenges we had [before the pandemic] just became exacerbated with the pandemic,” Jodi Tyson, Three Square’s vice president of strategic initiatives, told The Nevada Independent on Wednesday. “In our call center, we had nine desks that were pushed up against the walls in two offices, and we squeezed nine people into that ... we also had a senior hunger program that was limited to the number of people that they could serve based on the available space for food at our other building.”

“We've chosen that day as a way to express our appreciation to the community for the support that they have provided to us,” Tyson said.

Hunger in Nevada is a problem that is only getting worse, with the food insecurity rate — a measure of the number of people who don’t have consistent access to nutritional food — rising in the wake of the COVID-19 pandemic.

Feeding America releases annual reports that map food insecurity in every county across the nation based on the numbers from two years prior. In June 2020, the organization released a similar report which compared preliminary numbers from this year to the official numbers from 2018 to demonstrate how the pandemic has affected food insecurity.

That increase is reflected by the number of households in Nevada receiving benefits from the Supplemental Nutrition Assistance Program (SNAP). In February 2020, there were nearly 220,000 households in the state receiving these benefits.

That number has increased throughout the pandemic, with the Nevada Division of Welfare and Supportive Services estimating a peak in May of more than 269,000 households receiving benefits. That number was slightly lower in June and July, but remained higher than it had been prior to lockdown at approximately 245,000 households.

The sudden and drastic increase of food insecurity in the region put a strain on Three Square’s programs earlier in the year. The senior food programs the organization operates were serving 7,600 people prior to the pandemic, but by April, demand had shot up to 12,000.

“We were storing pallets of food in between our aisles just because we had no other place to put them,” Tyson said. “For adequate storage space, we were probably at about 8,000 seniors we could serve, but we just felt it was incumbent on us to do whatever we could and find every inch of space we could.”

With the new warehouse space on the east campus, Three Square will now be able to serve between 12,000 and 20,000 seniors comfortably.

The facility also houses the organization’s call center and government affairs department. Three Square’s call center is available to Nevadans who are in need of food but uncertain about what programs are available and best suited to their particular needs. In 2019, the call center fielded an average of 15,000 calls a month.

When the statewide shutdown of non-essential businesses was implemented in mid-March, the call center received 7,000 calls in just two days.

Although Three Square officials say 95 percent of call center staff are working from home, the space provides adequate social distancing for those who are still working in the office and will allow that to continue if and when more employees return to work in person.

There are 25 employees working in the new 31,000 square foot facility, all wearing masks and observing social distancing protocols. The facility includes office space, a volunteer room, the warehouse, a freezer and a cooler.

Three Square first purchased the property in 2019, but it took the organization nearly nine months to secure the funding to fully renovate the building. Multiple anonymous donors contributed to the project, and the organization was also able to secure federal funding both because it’s a space used for storage of federal commodities and because the property sits in a redevelopment district.

“This facility has been many years in the making and – given the health and financial challenges Southern Nevadans are facing in the wake of COVID-19 – its completion couldn’t have come at a more perfect time,” Brian Burton, the president and CEO of Three Square, said in a press release on Thursday. “The East Campus allows Three Square to help even more of our neighbors in need, especially seniors, whose struggles with hunger and isolation have only been exacerbated during these unprecedented times.”

While the project began in 2019 and social distancing rules have changed Three Square’s operations — including limiting the number of volunteers at its north and south campuses and restricting the amount of meals that can be prepped at its community kitchen — Tyson says the space itself did not need to be altered to fit new guidelines. Instead, what had already been designed helped to address the problems the organization has been facing since March.

“It was so beautifully thought, well-thought and well-crafted before the epidemic began that those places where we already felt squeezed, and then felt even more squeezed in those first couple months of the pandemic, now we can breathe this huge sigh of relief,” Tyson said.

And relief is what food bank officials said they hope to provide to every Southern Nevadan in need. Three Square continues to open up new meal sites throughout the region, including one that opened Thursday at the Fiesta Henderson casino along with the east campus, and encourages individuals to reach out directly to see what they can do for themselves and others.

“We encourage people on Hunger Action Day… to check out our website on ways that the community can actually take part in fighting hunger in our community … even calling our free phone center, if somebody's looking for help and not really sure where to start,” Tyson said. “A great way to celebrate Hunger Action Month is to allow us to serve you during a time that is in need.”