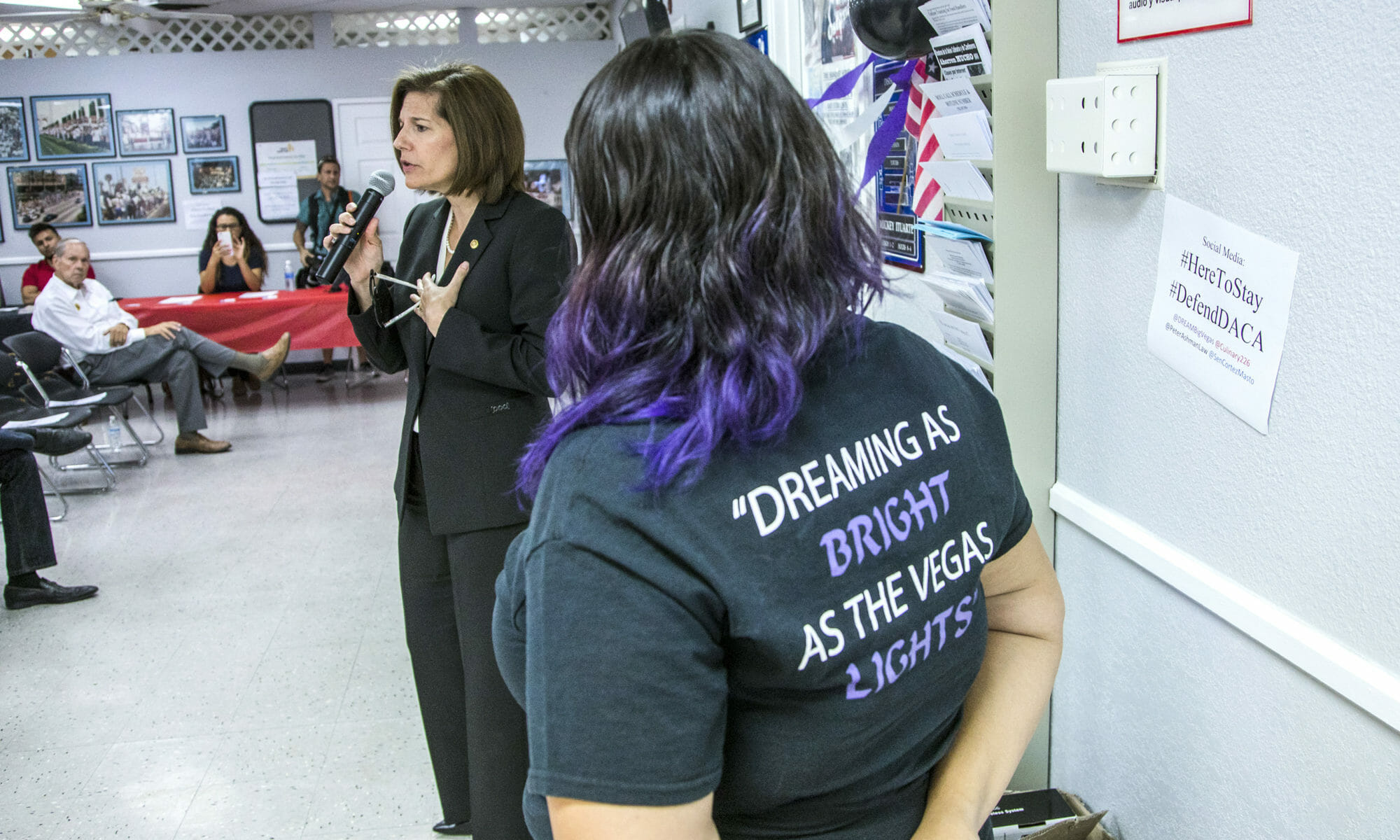 The fate of thousands of Nevadans and hundreds of thousands of people around the nation hung in the balance Tuesday when the Supreme Court heard oral arguments on whether President Donald Trump can terminate the Deferred Action for Childhood Arrivals (DACA) program.

The program’s days could be numbered if the five conservatives on the nine-member court back the administration’s argument that it has the discretion to end the program, which would affect the 700,000 currently enrolled in the DACA nationwide.

Started by President Barack Obama in August 2012 under an executive action, DACA protects from deportation immigrants illegally brought to the U.S. as children, also known as DREAMers, and allows them to work and go to school.

The oral arguments prompted immigrant-rights advocates and their congressional supporters to renew their calls for new laws to provide security to immigrants, as the Trump administration held out the possibility that he would work with Democrats to allow the DREAMers to stay even as he called into question their reputation for being law abiding citizens. A decision is expected by June 2020, a few months before the presidential election.

“What we need is a congressional solution on this and that’s why it’s so important that we have our senators and congressional representatives on it,” said Astrid Silva, a DREAMer who founded the immigrant-rights nonprofit Dream Big Nevada. She also said that even if the court ruled in favor of DREAMers, “it would only extend it for a short period of time.” Some 13,000 Nevadans participate in the program.

At a Democratic news conference after the arguments, Sen. Catherine Cortez Masto invited the president to join her in meeting with members of the DREAMer community.

“You will understand like the rest of us that they are an integral part of who we are as [a] country,” she said.

Sen. Jacky Rosen urged the GOP-run Senate to take up a DREAMers bill passed in the Democratic-controlled House in March. The bill would provide legal status for DACA recipients and those participating in the Temporary Protected Status (TPS) program. It would also establish a path to citizenship.

“It is past time for the Senate to take action and bring the House-passed Dream and Promise Act to the floor for a vote,” Rosen said

“DACA recipients are Americans in every sense but their citizenship status and deserve to live their lives without the constant threat of deportation,” Horsford said. “We must keep our promise to Dreamers.”

The Nevada System of Higher Education said it is also monitoring the case and NSHE Chancellor Thom Reilly reiterated the group’s support for DREAMers.

In a tweet before the hearing, Trump suggested that should the court rule in his favor he would work with Democrats to allow DREAMers to continue living in the U.S.

“Many of the people in DACA, no longer very young, are far from ‘angels,’” Trump said. “Some are very tough, hardened criminals. President Obama said he had no legal right to sign order, but would anyway. If Supreme Court remedies with overturn, a deal will be made with Dems for them to stay!”

To participate in DACA, immigrants cannot have been convicted of a felony, a significant misdemeanor, or multiple misdemeanors and not pose a threat to public safety or national security.

At issue is whether the courts can review the administration’s September 2017 decision to end DACA and, if so, whether the move to end the program was legal.

The Trump administration argued that the courts had no right to weigh in. In his argument, U.S. Solicitor General Noel Francisco said that White House’s decision was not reviewable because it was a discretionary move, a decision to enforce the nation’s immigration law, and therefore in accordance with the Administrative Procedure Act, which stipulates how the government establishes policies and regulations.

“The decision whether or not to enforce the law is committed to the agency’s unreviewable discretion,” Francisco said.

He also argued that even if the decision to end DACA was reviewable by the courts, the administration provided sufficient rationale—including its dislike of non-enforcement policies because they undermine the public’s confidence in the rule of law—to not be arbitrary under the APA.

“The department’s reasonable concerns about its legality and its general opposition to broad non-enforcement policies provided more than a reasonable basis for ending it,” Francisco said.

Arguing on behalf of DACA recipients, Ted Olson, who served U.S. Solicitor General under President George W. Bush, said that the move to wind down DACA is reviewable by the courts because it is a matter of law rather than a discretionary agency decision that would be protected under the law.

Olson said that the administration primarily cited the illegality of the program as the reason for ending DACA, and therefore had no discretionary choice to make.

Olson cited a letter before the decision from former Attorney General Jeff Sessions to then-acting DHS Secretary Elaine Duke calling on her to end DACA because it was “unconstitutional” and “was effectuated by the previous administration through executive action, without proper statutory authority.” In his argument, Olson contends that the Trump administration has no choice but to follow the law.

Duke subsequently issued a memo ending the program and cited a ruling by the Fifth Circuit Court of Appeals, upheld by the Supreme Court, that said that Deferred Action for Parents of Americans and Lawful Permanent Residents (DAPA) and a proposal to expand DACA were unconstitutional. The ruling led the administration to argue that the original DACA program was also illegal. DAPA was a program that would have protected the undocumented parents of citizens and permanent residents.

Olson also made the case that once the courts decided the policy is subject to judicial review, the judges should strike down the policy because the White House lacked a sufficient rationale to change it and because it and violated a separate APA provision that forbids the administration from changing federal policy arbitrarily and capriciously.

“That decision required the government to provide an accurate, reasoned, rational and legally sound explanation,” Olson said. “It utterly failed to do so, asserting only the attorney general’s unexplained assertion that he had no discretion because DACA was an unconstitutional exercise of authority by the executive branch.”

Justices Neil Gorsuch and Brett Kavanaugh, conservatives recently appointed to the court by Trump, sought to pull out of Olson what was lacking in the administration’s rationale.

Olson said that the administration could have done a cost-benefit analysis.

All eyes will be on where Chief Justice John Roberts comes down if the other four conservative justices support the administration.

Roberts could once again be the swing vote as he was earlier this year when he was the deciding vote in striking down the White House’s plan to add a citizenship question on the 2020 Census questionnaire.