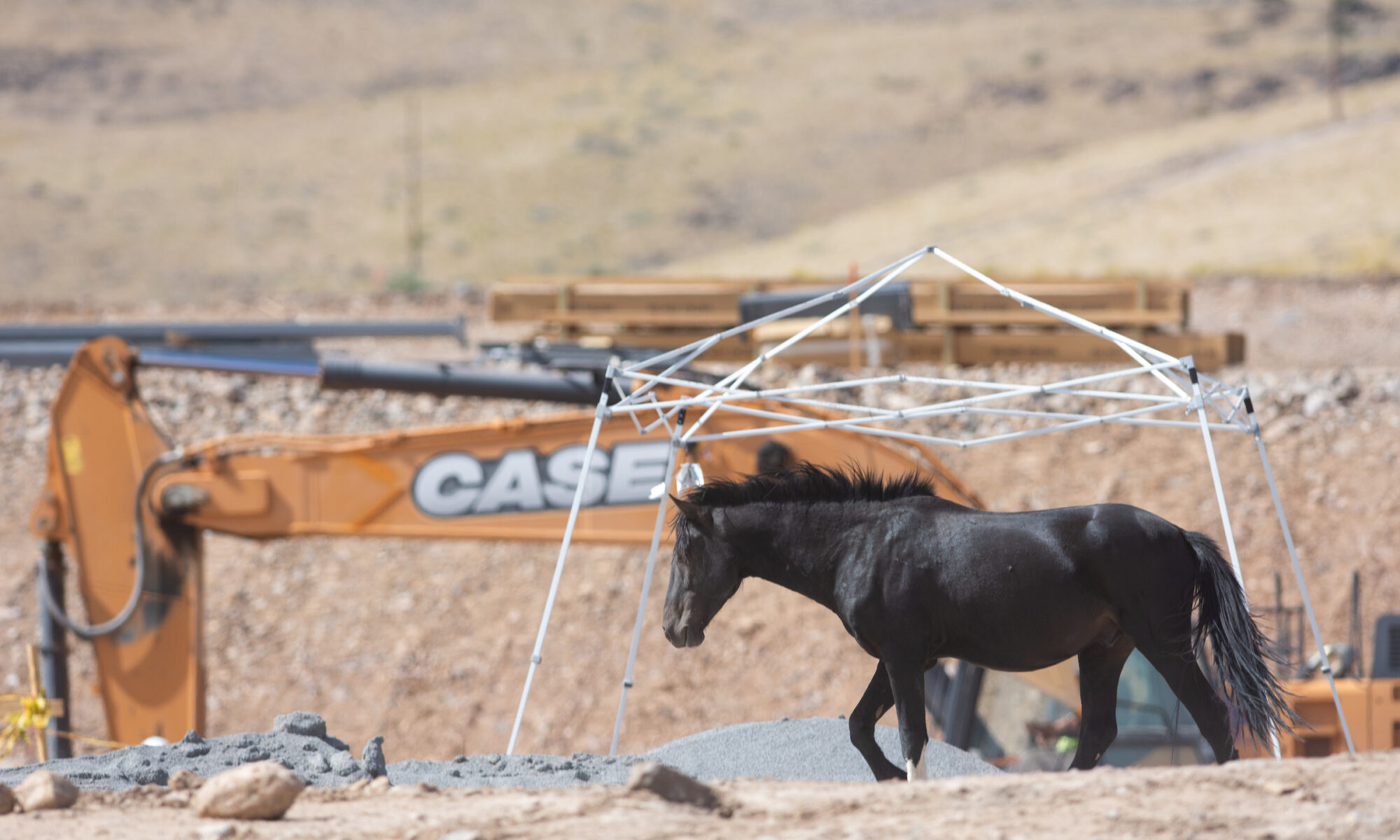 In early September last year, high-profile tech companies in the Tahoe Reno Industrial Center appeared before a legislative committee with a request — public financing to help defray the costs of a major pipeline project. Their goal was to obtain more water to help fuel growth at the Northern Nevada industrial park, one of the largest in the world and home to Tesla’s Gigafactory.

The lawmakers approved. Then the state financing fell apart.

Less than three weeks later, the industrial park’s largest landowner withdrew its support of the deal, notifying the companies in a letter obtained by The Nevada Independent that it did not want to be associated with a project that could be seen as providing “corporate welfare.”

An attorney for Blockchains, a little-known techno-utopia company that owns most of the park’s land, wrote in the letter that “the project has now transformed to focus primarily on the precise type of taxpayer-funded subsidiary that we were against when we first learned of the project.”

Blockchains’ letter and other documents obtained through two public records requests offer new insight into the relationship between business and government at an industrial park that lured companies with incentives and support from the state.

The letter comes amid new scrutiny of those practices. Last month, The Nevada Independent detailed how the industrial park’s public water district, which wants to use eminent domain to build the pipeline project, blurred the line between a government and private utility for decades.

The water district is operated by a developer-owned company, TRI Water and Sewer, with board members who all reside at a brothel that is owned by the main broker for the industrial park.

The state office that helped engineer the complicated public financing for the pipeline has also come under recent scrutiny. On Monday, Gov. Steve Sisolak criticized the Governor’s Office of Economic Development for the criteria it uses when deciding to approve tax incentives. Sisolak said he plans to move the office in a new direction. Major companies at the industrial park have benefited from state and local tax breaks in addition to Nevada’s already lenient tax structure.

“This deal was rushed, lacked transparency and is the antithesis of public accountability,” said Assembly Majority Leader Teresa Benitez-Thompson, a Democrat who was on the Interim Finance Committee. “It begs the question of allowing such statutes to remain on the books.”

A request from the state

In 2015, the Legislature met for a special session to consider tax breaks for Faraday Future, an electric car company that planned to move to North Las Vegas. The cash-strapped car company abandoned its plans to build a factory, but the statutes from that session remained on the books.

Out of that special session, the economic development office gained bonding authority. By September 2018, the office was looking at using bonds to help finance the effluent pipeline.

The 16-mile pipeline will siphon treated effluent from a regional wastewater facility to the park. City officials consider it a win-win for the Reno area, helping ratepayers defer costly upgrades while bringing more water to an industrial park that has helped diversify the state’s economy.

The companies backing the effluent pipeline wanted to expand their existing operations or build on vacant land. One limiting factor for their growth plans was water. But the effluent project was expected to cost more than $100 million. To finance the off-site pipeline — stretching from the park to the regional wastewater facility along the Truckee River — they turned to the state.

The reimbursements would not dip into dedicated property taxes for schools but would tap into revenues for county fire services. It also taps into payroll tax and the modified business tax. The state justified the revenue loss by noting that the reimbursements would be a sliver of the $1.35 billion in tax revenue that it expected the area to generate with the new infrastructure. Officials also noted that the revenues would benefit infrastructure built outside of the industrial park.

On Sept. 5, the 23-member Interim Finance Committee approved of what came to be known as the SAD/TIA deal. The vote to approve the bonds was unanimous.

Those bonds were never issued.

After months of negotiations, several companies decided to pre-pay about 75 percent of the periodic assessments, according to the letter Blockchains sent to project leaders on Sept. 24.

In the letter, Blockchains General Counsel Lee Weiss recounts learning the night before that several companies intended to pre-pay about $24 million of the project upfront, despite their request for bonds. It suggested that companies had the finances to pay for the project.

At the same time, the companies would still be reimbursed with the new revenue.

With the company’s official launch about one month away, he wrote Blockchains was “unwilling to assume the risk of being portrayed as an organization that promotes projects that provide corporate welfare to pay for improvements that we have already contractually agreed to fund.”

Blockchains announced that it was withdrawing from the public financing.

Bob Sader, a former legislator and an attorney for the industrial park’s developer, declined to comment on the letter.

Not everyone agreed with Blockchains’ view of the deal. Proponents argue that in addition to boosting the economy, the pipeline would help cities save on expensive facility upgrades.

“I was disappointed by [Blockchains’] characterization of the project,” Ben Kieckhefer said in an interview last week. “There were plenty of reasons to support it from a public perspective.”

Kieckhefer has expressed reservations about other aspects of the pipeline construction.

By October, the companies had scrapped the financing deal. The park’s developer, Tahoe Reno Industrial Center LLC, will pay to construct the pipeline. It has entered into private agreements with companies to fund it. The companies could still be reimbursed with the new tax revenue that the project helps generate. The county could reimburse up to $28 million to the companies.

The companies are not reimbursed from existing revenue.

It is operated by a developer-controlled company, TRI Water and Sewer, and its board members live at a brothel owned by Lance Gilman, responsible for marketing the industrial park. Gilman is also a Storey County commissioner and lists TRI Water and Sewer on his financial disclosure.

The board members also report income from at least one of Gilman’s companies.

Through a 2001 operating agreement, any board responsibilities that are not required by statute were delegated to an existing developer-owned private water company, TRI Water and Sewer.

For many years, the relationship, blessed by Storey County, reflected a financial arrangement. The master developer, Tahoe Reno Industrial Center LLC, paid for the infrastructure and gave it to the public water district free of charge. It acquired the water rights that the district controlled.

But the relationship came with benefits too.

The unique structure, a combination of circumstances and loopholes in Nevada law, allowed the industrial center to effectively operate a private water utility while avoiding oversight from state regulators. Instead, its oversight came from a board that is closely tied to the park’s developer.

When the industrial park land was largely vacant, the arrangement flew under the radar.

Then in January, Blockchains scooped up about 67,000 acres of land at the 107,000 acre park. It comprised most of the remaining acreage at the park. At the time, a land play of that size by such a mysterious company raised eyebrows about how it planned to develop its land. Those questions have only amplified since the Trump administration made the area eligible for a new tax break that could boost Blockchains and others if they invest in the land or decide to sell it.

In early 2018, Sader began discussing the issue with the park’s major customers.

Those involved in or advised of the talks included Google, Switch, Tesla and Blockchains, Sader said. All of the companies declined to comment or did not respond to multiple email requests.

By the time legislators reviewed the financing, the companies had not resolved the problem of the water district’s structure. But during that time, one possible solution was being discussed.

One email suggests that the structure of the water district had some bearing on the project. On Sept. 24, 2018, Sader emailed Switch that he needed a decision soon on whether the large companies would take over the water district’s operator, TRI Water and Sewer.

Sader writes “time has just about run out on effectuating the transfer...so as not to disrupt the [project] and on-site process water projects. If so, [the park] must plan for an alternative path.”

“If I do not hear from you with details on a proposed change of control this week, I will assume Switch has lost interest in the concept and proceed accordingly,” Sader writes in his email.

The companies opted against the takeover, and the park’s developer still controls the district.

Sader said that the water district turned to an alternative plan. Based on Nevada law, a county commission can serve as a public water district’s de facto board in certain circumstances.

The commission has yet to vote on whether it wants to serve as the district’s trustees.

“That is only in discussion,” said Austin Osborne, the county manager.

He said the county was not interested in taking over the management of the water district.

In recent weeks, the public water district has rolled out reforms and is restructuring itself so that it can operate as an independent entity, separate from the master developer. The district plans to hire staff, and board members have started reading disclosure statements at meetings. TRI Water and Sewer plans to terminate its operating contract with the water district on June 30.

The documents also highlight a shifting power dynamic at the park. Blockchains now controls most of the park’s land — an amount larger than Reno — but it has little power over decisions.

After The Nevada Independent first reported that the privately controlled public water district was planning on using eminent domain for the project, Blockchains’ lawyer sent another letter. In it, he challenged whether the project met the legal threshold for seizing private property.

“While we do not profess to be eminent domain experts, as attorneys, we are not convinced that the pipeline project constitutes a ‘public use,’ Weiss, the lawyer, wrote in an Oct. 24 letter.

Weiss’ letter concluded that “even if the [water district] has standing, as the pipeline is being constructed by a private party for the benefit of private parties, we do not believe that there is any significant public purpose to justify an eminent domain action.”

The public records show a continued effort to negotiate with the Menezes family, which owns a trucking company, a hay cubing operation and owns land above the pipeline’s proposed route.

In an emailed response to Weiss on Nov. 1, Sader noted that “our eminent domain attorney is strongly of the opinion that the legal analysis in your letter on the public use issue is flawed.”

During a board meeting on Friday, that eminent domain lawyer, John Gezelin, recommended using condemnation because the Menezes family declined the most recent settlement offer.

In an initial challenge to eminent domain, the Menezes family raised questions about who was behind the project and who was paying for it. They cited a 2008 constitutional amendment “that the transfer of property from one private party to another private party is not considered a public use.” Whether or not a project is for “public use” is a key standard for justifying eminent domain.

Some legal experts are unsure how the courts would rule on the provision.

Because many eminent domain cases end with settlements, there are few precedents. Reno attorney Steven Silva, who teaches property law at Truckee Meadows Community College, said the courts have traditionally weighed a project’s purpose more heavily than who is paying for it.

“The form of the actor has been less important,” he said “It is traditionally the use.”

A court dismissed the water district’s first attempt to use eminent domain over noticing issues.

On Friday, the water district voted to approve a new eminent domain action.