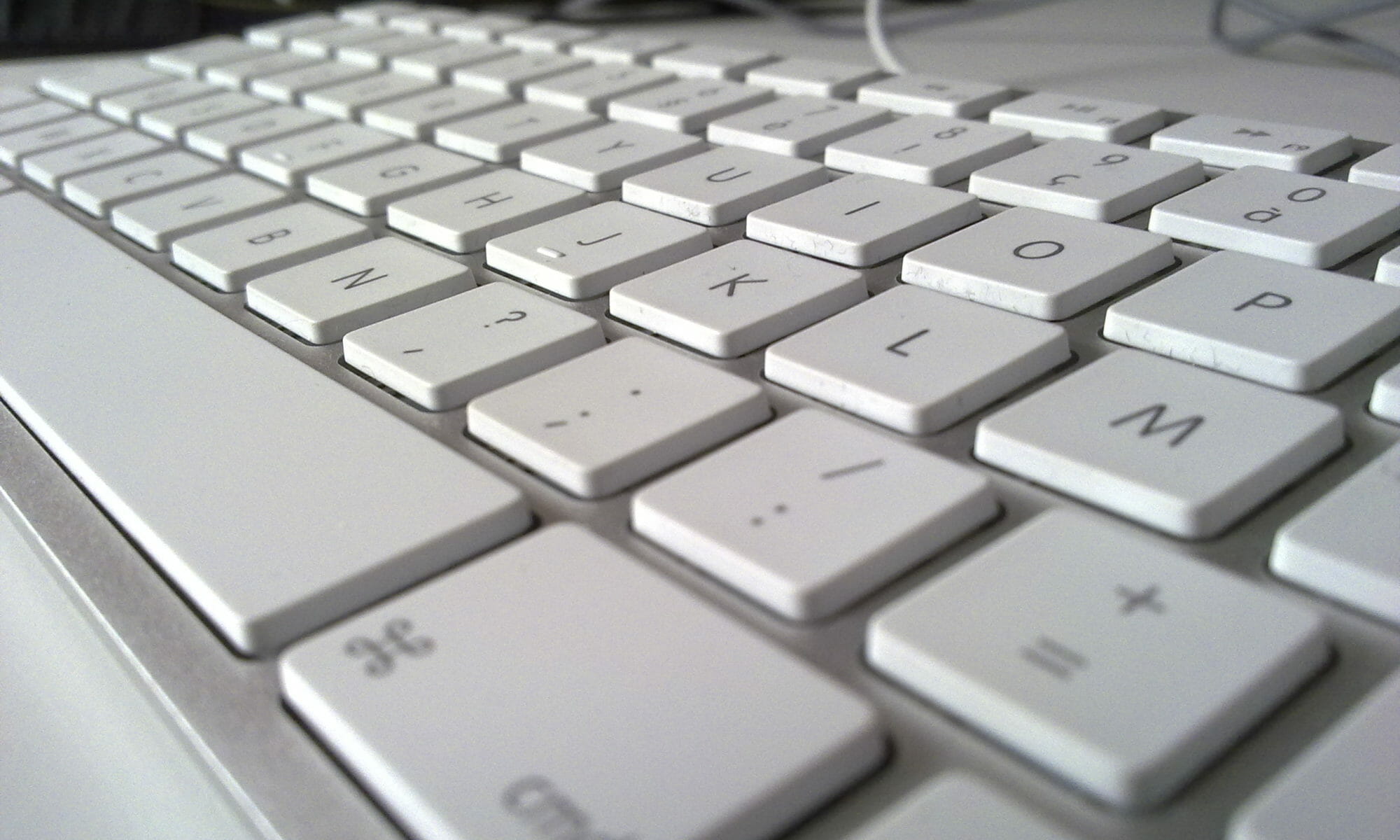 We have a problem in Nevada journalism:  news teams not crediting other news teams for their work. As the managing editor of one of those uncredited sources, I find it galling. As the friend and colleague of numerous journalists to whom it has happened, I find it dismaying. As a person who cares about integrity and ethics, I find it appalling.

Before I get into the nitty gritty, let me be clear:  what I write here is not just about The Nevada Independent. Numerous news teams are seeing their work stolen -- or, if you prefer, paraphrased without credit -- by competitors. It is wrong, and it needs to stop.

Barry Smith, executive director of the Nevada Press Association, agrees. He says the issue has irked him over the years -- including when it happened to him as a reporter.

“It drives me crazy, too,” Smith wrote in an email. “Back in my day, I’d occasionally clip a story, attach the dictionary definition of “plagiarism” and fax it to the offending newsroom. I don’t know if it made a difference to them, but I felt better.”

While the Nevada Press Association does not have its own code of ethics, Smith says when it comes to crediting he has always relied on well-established ethical norms including the code published by The Society of Professional Journalists Code of Ethics which states: “Identify sources clearly.”

“If you get beat on a story, suck it up,” added Smith. “In this day and age, there’s really no excuse for not linking to the original sources. It’s all part of the honesty and transparency I think we in the press need to emphasize.”

What about the issue of advancing a story? Should a reporter still credit the source of the original news, even though he/she has done some work to add to the narrative?

“I realize that sometimes a reporter who has been working on a piece feels he or she has done so much new and original reporting that it’s a whole new story,” said Smith. “Even so, it’s just petty not to acknowledge where and when news was broken.”

The Pulitzer Center’s page on journalism ethics and standards backs up Smith’s view when it says: “Be forthright in explaining where information came from. Give credit if it originated with another source.”

The New York Times Guidelines on Integrity includes these statements: “Other People’s Reporting. When we use facts gathered by any other organization, we attribute them. This policy applies to material from newspapers, magazines, books and broadcasts, as well as news agencies like The Associated Press.”

The Washington Post’s policy on third-party content says: “When linking to, embedding, aggregating or simply referring to non-Post content on washingtonpost.com, the first and best rule to remember is a paraphrased version of the Golden Rule: Use and credit the content the way you’d expect other sites to use and credit Post content.”

Not giving credit when you know damn well where you got the original story -- and knowing how much it means to you when someone gives you credit for your hard work -- is thumbing your nose at the journalism code of ethics and turning a blind eye to The Golden Rule.

It is also unprofessional, in a profession that is already under fire.

Who is doing it right?

My colleague and friend Anjeanette Damon, a reporter for the Reno Gazette Journal, runs a tight crediting ship. For example, three paragraphs into a recent story, she credited The Indy for first reporting the key fact: 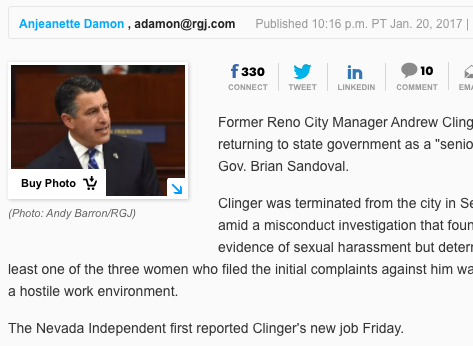 Seth Richardson, also with the Reno Gazette Journal, mentioned our reporting when summarizing issues constituents were having in reaching Sen. Dean Heller’s office:

To all the other reporters who also give credit as a matter of course -- I chose only two recent examples here -- kudos, and feel free to send me a screen shot if you want to add a good example of proper crediting to this story.

Nationally, print news organizations credit and link to one another routinely, both in their stories and on Twitter. Fair play and professional courtesy is the norm, not the exception. Here's one that involved us and that underlines how nice it is for a reporter to receive credit for his/her work:

Who needs to shape up?

After mulling it over for a number of days while putting this piece together, I have decided not to name the Nevada media teams who are not playing by the rules. (There is more than one, some in direct competition with us.)

As tempting as it is to provide screenshots and links showing other organizations blatantly co-opting or advancing Indy stories, I believe our readers know where they first read something. I think many of them agree that it is only right to give credit where credit is due when an enterprise/exclusive story is involved, as these readers said this week on Twitter: 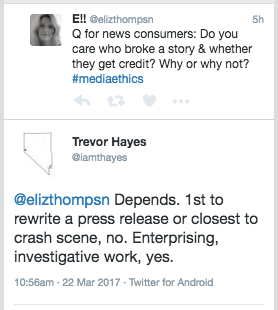 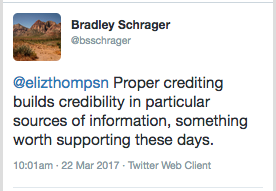 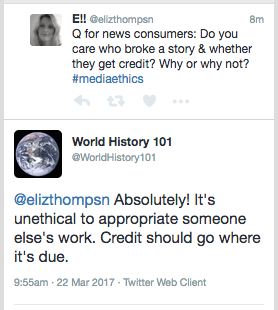 Some people think there are more important media issues these days, though, like this former Review-Journal reporter: 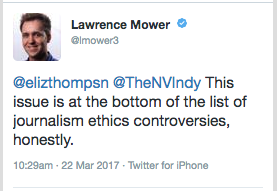 Perhaps. I realize that a lot of this may seem like "inside baseball" to non-journalists, and I agree that the advent of fake news and viral hoaxes is of greater import and wider concern. But when standards and ethics begin to erode to the point that trust in the media is at an all time low, everything we do matters more than ever.

For The Indy’s part, we have credited other news teams each and every time we’ve advanced a story they wrote or even mentioned a fact established in one of their stories. Following are three examples via screen shots from published stories on our site:

You can find many other examples of crediting by searching our website for the names of these and other Nevada newspapers.

It’s not just in print and web news that we have an ethics problem, by the way.

Nevada’s commercial television stations -- I have worked for two of them and have friends who work at the others -- have long used the state’s big newspapers as sources. Credit is nearly never given to the print or online source who broke the story or did the investigative work when a story is broadcast.

Journalists stealing the work of other journalists…

It’s outrageous. And we wonder why the public looks down its collective nose at our profession?

“It's what reputable journalists do, and it enhances their credibility,” Hausch wrote in an email on the topic. “Sophisticated news consumers know when/where they previously heard/read information, so you'll get caught if you pretend you have original information when you don't.”

Crediting news sources is both a matter of professionalism and ethics says Hausch.

“It's as basic as following the Golden Rule,” says Hausch. “I don't want you stealing my original material so I won't steal yours.”

In a piece on avoiding plagiarism, Poynter suggested that reporters and editors keep themselves honest by asking these seven questions:

Does this wording sound familiar?

Do I know where it came from?

Have I arranged my notes so attributed material remains separate from my own material?

Can I document the source of my information, description, or observation?

Have I asked my editor to alert me to anything she, or he, thinks reads like something else she, or he, has read?

Am I giving credit, or some indication, as to where this material came from when appropriate?

Have I double-checked the source of work?

I hope Nevada’s offending media members will soberly weigh this issue with intellectual honesty and resolve to start giving credit where it’s due. It's the right thing to do, and it will ultimately benefit both the profession and the public if we all uphold the highest ethical standards as a matter of course.

Either way, The Nevada Independent’s policy is and will always be to credit other journalists and news organizations for their work.