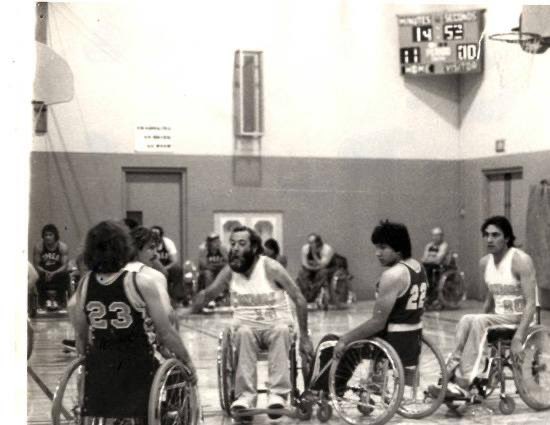 You never knew whom you’d meet at the Tap House. One night I met a man who helped save my life.

I didn’t know it at the time, of course. John Chambers was just a friendly guy in a wheelchair who introduced himself and invited me to grab a beer and sit with him. He was with his friend, Billy Eddins, who also used a wheelchair to get around. We talked sports and politics, and about adaptive recreation. John ran the adaptive recreation program at the City of Las Vegas. Billy taught at the school district. In time I’d meet their wide circle of friends, many of whom played integral roles in developing adaptive recreation and physical education programs for the city and public school system.

Over the years we talked often about current events and the painfully slow progress Las Vegas was making when it came to embracing the Americans with Disabilities Act and helping to let the differently abled enjoy their share of the American Dream. We spent time in the poorly planned disabled seating sections of Cashman Field and the Thomas & Mack Center. We went to casinos that were still trying to get it right. Let’s just say some were trying harder than others.

In time I learned to never open a door for John Chambers – he’d roll over your foot. And heaven help the poor sap who told him taking an escalator in a wheelchair was off limits. Self-pity had no place in John’s life.

He was a genuine road warrior who traveled the world in the name of disabled sports. The young people and military veterans he mentored learned not to let their challenges outweigh their sense of fun and adventure.

A role model? He’d cackle at such praise and remind you he was really a  r-o-l-l model.

My daughter Amelia was diagnosed with brain cancer. The surgery was successful, but the chemotherapy she received took away her ability to walk. At age 9, she was in a wheelchair and dealing with the overwhelming after-effects the disease and treatment. Her parents were overwhelmed, too.

I immediately heard from John, Billy and many others. The Smiths found a whole community of support waiting with open arms. It was nothing short of lifesaving.

When I learned that John Chambers had died Oct. 9 in Arizona after a long illness at age 66, I was immediately returned to those emotionally delicate days. John helped remind the Smiths that they weren’t victims, and that they just needed to get back into the game.

And so we did, through weekly wheelchair sports activities and junior Paralympic events organized by John’s former wife Barbara Chambers, now in her 37th year at the school district, with volunteer support from city staffers Jonathan Foster, Lonny Zimmerman, and many others.

Almost everything we did was influenced by John’s buoyant, independent spirit. As Barbara puts it, “John had the passion. You have to be passionate about what you’re doing. People felt that from John.”

A Los Angeles native made a quadriplegic after contracting valley fever as a teen-ager, John grew up in the era before the federal government began paying more than lip service to the disabled. He lived through the generation that changed wheelchair technology and spent his life speaking out as a tireless advocate for disability rights.

John played and coached on championship basketball teams and in 2011 was inducted into the National Wheelchair Basketball Association Hall of Fame. His 3-point shot was automatic, his golf game a hustler’s dream. Until his body weakened, he was competitive in a variety of sports. And he made sure the young people he encountered were introduced to the possibilities available to them even as he developed new ways for them to play.

With the city’s Adaptive Recreation Department, he helped expand basic programs outside the gymnasium and high school track. Before long, adaptive recreation included everything from water-skiing to weekend campouts.

That passion was obvious when he found Las Vegas businesses – and there were many of them – who hadn’t bothered to make their restrooms or dining rooms accessible.

“He was always fighting because nothing was accessible,” Barbara recalls. “He would complain. He’d have to go through a kitchen because there was no access to a dining room. It was definitely third-class citizen stuff. He’d travel with teams that wouldn’t be able to get into a restaurant, not even a Denny’s. A lot of places got grandfathered in and didn’t have to comply (with ADA). John was always trying to teach people about accessibility.”

His superpower was helping others with disabilities overcome obstacles and see that life was still a grand adventure — a participation sport whether the activity was basketball, bowling, or climbing a curb and taking the escalator. The key, he knew, was getting off the sideline and into the game.

Now retired from the school district, Eddins recalls Chambers as a teacher who taught by example.

“John taught everyone that life is valuable and should not be taken for granted no matter what the abilities are,” Eddins says. “John taught me to value everyone. It doesn’t mean you have to like or agree with them, but value them and respect their dignity.”

“For a soft-spoken man, he was always just a pillar of strength and inspiration,” Zimmerman says.

“John was all about inclusion,” Zimmerman says. “His heart’s own belief was that if you were a person with a disability, you should be able to recreate at a park across the street from your house and not have to travel across town.

“He said, ‘We’ll know we’re successful when we no longer have to have an adaptive recreation division and a person with a disability is included as a person just like everyone else.”

After his family and friends, John’s loves were baseball and the Grateful Dead, the band he saw play more than 150 concerts. Beer might also have ranked in the top 10. He spent so much time in Arizona during his annual pilgrimages to baseball spring training games that he wound up moving there after retiring. He married his longtime partner, Ann, two years ago. He leaves behind an adult daughter, Megan Chambers, who was his heart’s greatest joy.

John kept his sense of humor and keen awareness of current events until the end. He said he didn’t need a bunch of flowers at his funeral, Barbara recalls, or many tears either.

“He wanted everyone to get out and vote,” she says.

I think it’s the least we can do for a great Las Vegas roll model.