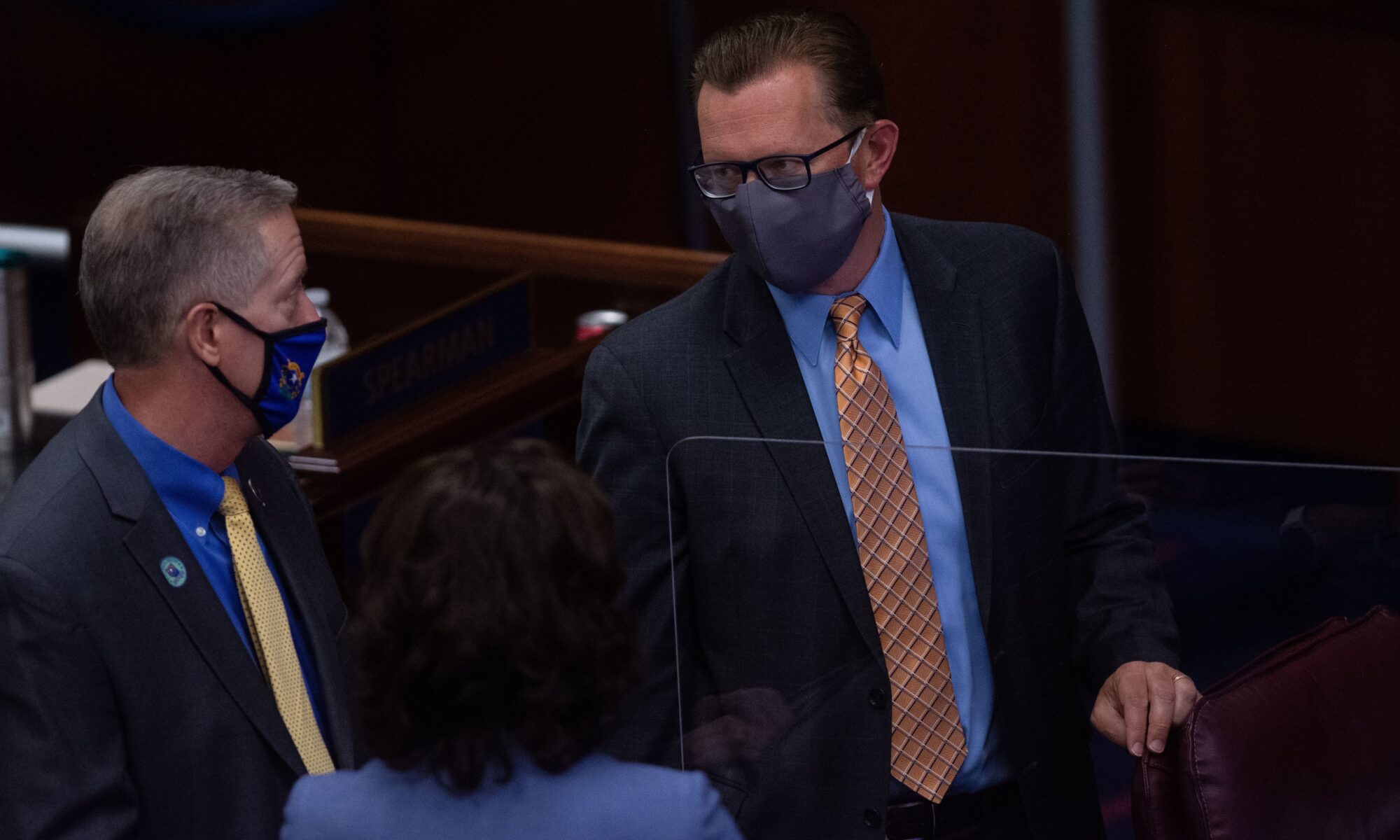 The Picard Maneuver was a battle tactic invented by Starfleet Captain Jean-Luc Picard. In 2355, Picard was in command of the USS Stargazer when it was attacked by an unknown alien vessel, later determined to be of Ferengi origin.

The Picard Maneuver was born out of desperation during the battle. The Stargazer, which was damaged, suddenly accelerated into high warp directly towards the Ferengi ship. By doing so the Stargazer appeared to ship's sensors, for an instant, to be in two places at once.

It’s tempting to engage in a bit of schadenfreude over the lengthy back and forth (and back again) between Senate Democrats and Sen. Pickard. From any other columnist, it might even be deserved.

I, unfortunately, am in no position to complain. Not this week.

Last week the Libertarian Party held a hybrid online/in-person convention that started with an even more colossal waste of time than trying to pass a tax increase through a small Republican minority fighting desperately to matter this biennium. How we ended up holding an in-person convention in Orlando is a story unto itself — the convention had to be relocated not once but twice due to entirely predictable pandemic-related restrictions and business closures before it finally convened at a third venue that doubled as a regional on-site COVID-19 testing facility. Once we finally found a venue and called to order, however, we had to complete our first order of business — approve our Credentials Committee Report.

It took us nine hours and nearly cost Jo Jorgensen and Spike Cohen their place on Nevada’s ballot.

The procedural problem was that the Libertarian Party bylaws and convention rules do not explicitly authorize remote participation in national conventions. Consequently, even though our parliamentary authority explicitly authorized conducting business electronically months ago, some Libertarians decided we needed to be surprisingly strict about how we followed our own rules. From their perspective, in order to allow remote participation, the in-person delegates needed to pass a bylaws amendment — which would require a two-thirds majority of the in-person delegates to pass — enabling remote participation in the convention.

That, needless to say, was not how those of us participating remotely saw things.

From our perspective, it looked like roughly 300 in-person delegates were looking for an excuse to disenfranchise more than 500 delegates, including myself, who were participating remotely to comply with government and workplace travel restrictions. From our perspective, if the in-person delegates thought we were delegates in good standing in the first place, they would have just approved the credentials report listing us as credentialed delegates at the start of the convention. Instead, they were pursuing a procedural path that could potentially lead 100 or so in-person delegates to disenfranchise several hundred remote delegates if they voted against enabling bylaws language. In retaliation, Nevada’s delegates (the vast majority of whom were participating remotely) were unanimously prepared to disaffiliate from the Libertarian Party and take our ballot access with us.

After nine hours, the in-person delegates got their way. Pleasantly surprisingly, they then did the right thing and passed the enabling language so the rest of us could participate in our convention.

I bring this up to highlight how a lack of trust can waste incredible amounts of time, even when everybody ostensibly wants the same thing.

To be fair to everyone in the Legislature, there’s no need for anyone to assume good faith from anyone when it comes to mining taxes in this state. On the one hand, there isn’t a single Democrat in the state who needs to defend mining to stay in office — that, rural Nevadans, is what happens when you exclusively tie your fortunes to one political party and is why casinos donate to every prospective or elected politician with a pulse. You don’t have to read The Dictator’s Handbook to know it makes good political sense to deliver benefits to your constituents while pushing the costs of those benefits on to someone else’s constituents. Consequently, there’s no need for Democrats to exercise moderation when pondering how much mining should be taxed, especially as many Democrats feel the same way about mining that some legislators feel about sex work — namely, that it’s a dangerous anachronism best left in Nevada’s past.

On the other hand, obstinately blocking tax increases is one of two things Republican legislators can successfully do. As long as Democrats work together in lockstep (which, except for SB3, they largely have been), Republicans matter every bit as much in the Legislature as I do unless a two-thirds majority is required. The second thing Republican legislators can do is ice fundraising for incumbent Democrats by encouraging summer special sessions held during election years to last as long as possible since legislators aren’t allowed to raise money while they’re in session. Put the two together and it’s no surprise Democrats expect Republicans to do their best Lucy with a football impression with any proposed tax hike.

Given all that, it shouldn’t be too surprising that it took eight hours of deliberation, plus another two days of shadow play in front of the press, for Sen. Pickard’s seemingly earnest offer to vote in favor of reducing mining tax exemptions in exchange for decreases in cuts to targeted state education spending to be taken seriously by Senate Democrats. It also shouldn’t be too surprising that, once the Democrats took the offer seriously enough to bite, it was immediately yanked back and replaced with a laughably mendacious offer to levy a $600 million tax on renewable energy instead.

On the one hand, as a matter of policy, it might be for the best that the compromise failed.

It’s true that mining is one of a small handful of industries to be explicitly protected in the state Constitution, with its total taxation constitutionally limited to less than five percent of net revenue. What’s also true is that the Commerce Tax, which is applied to non-mining and non-gaming industries in Nevada, is a fraction of a fraction of a single percent of gross revenue. Though mining’s preferential treatment is coded more explicitly into Nevada law than most other industries, it’s not like mining has enjoyed an unusually good deal out of Carson City. That said, mining is also the only industry in Nevada that does well during an economic downturn, so it makes political and a certain sort of fiscal sense to require mining to do more heavy lifting of the state’s budget during times of need.

Additionally, though I appreciate the desire to keep public funding from getting swallowed by administrative costs imposed by hidebound bureaucracies instead of going to those in need, microtargeting funding for specific programs, like Read by Grade 3, destroys necessary flexibility required to respond to adverse conditions. Just as it’s easier for a household to adjust to a sudden drop of income if it’s not burdened by recurring bills and debt that compel unnecessary spending, it’s easier for agencies to prioritize funding for services in higher demand when they are not hamstrung into funding specific programs regardless of the demand for them.

On the other hand, as a matter of politics, all participating sides would have won a little if Sen. Pickard was serious. Democrats could have claimed they’re not afraid of raising taxes, even if they’re only raising taxes on an industry that employs people that never vote for them anyway (they still can, in fact). Sen. Pickard could have claimed he’s willing to put party and ideology aside to benefit his constituents, of whom approximately zero of them work in mining. The rest of the Republicans in the Legislature, meanwhile, would not only have been able to use Sen. Pickard’s willingness to compromise as proof that they’re able to negotiate in good faith to preserve a desired policy goal, they also would have successfully ran out the clock on the special session a bit further, perhaps denying incumbent Democrats another day or two of potential fundraising.

Yes, foolish — you don’t get to claim to be the pro-business party when you try to replace a $102 million single-industry tax with a different $600 million single-industry tax. When faced with a tax hike, Republicans countered by quintupling it and any Democrat that doesn’t trumpet that on every campaign mailer between now and November should fire their campaign manager. I don’t care how much it “owns the libs” and I don’t care how certain you are that Senate Democrats will never take you up on your offer — a 1.5 cent per kilowatt hour tax on renewable energy would raise power bills across the state by up to 20 percent. If Sens. Pickard’s and Hardy’s plan actually passed, it would break family budgets and annihilate commercial and industrial activity throughout the state.

With the Pickard Maneuver behind us, will Democrats allow Republicans to vote yes on a single bill between now and November, or will they purposefully edit each and every subsequent bill until every Republican has to vote against it? Have Republicans irreparably damaged their credibility with everyone, their base included, or will their base forgive them for pushing a larger tax hike than even Democrats were proposing?

Until we find answers for those questions, I suppose we’re just going to have to pull our shirts down, get comfortable, and wait until next week to find out how this special session ends.