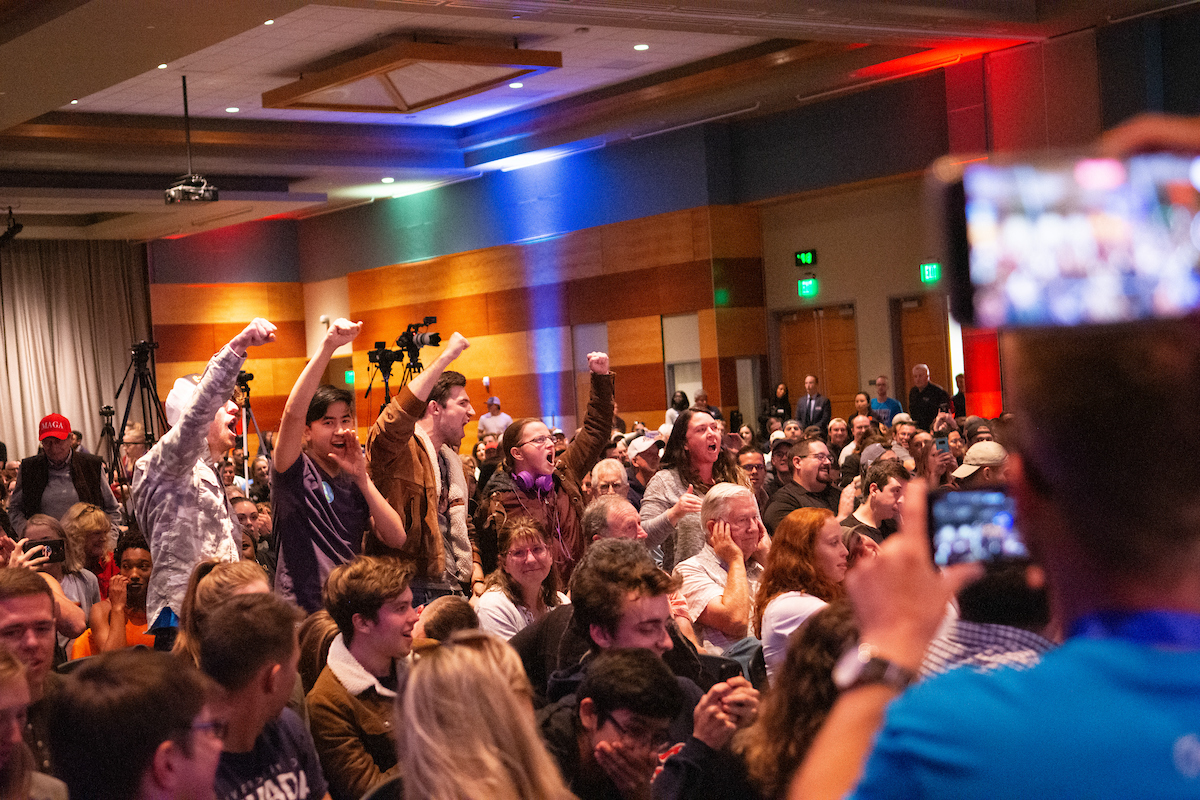 To hear some tell it, the University of Nevada campus might as well be Berlin circa 1932, a “right wing” hotbed of racism and anti-semitism on the very precipice of some sort of Kristalnacht conflagration. The latest proof?  The University has (gasp!) allowed a conservative student group to host a conservative speaker who says bad things about socialism and doesn’t hate Donald Trump, and even worse, invites people who disagree with him to ask him questions.

In a letter to University President Marc Johnson attempting to get the speaker, Charlie Kirk, uninvited, hundreds of lefties blamed Johnson for being “complicit” in these dark times for not cracking down on the free speech of people they disagree with, or violating due process, or other things that actual Nazis are known for. The target of the protests is a campus-focused conservative political operation called “Turning Point USA” which is led by Kirk and which has committed the crime of being politically active in a place where lefties feel entitled to hold a monopoly. TPUSA is accused of being a “white nationalist” organization because previous employees of that group were fired for saying racist things, which is weird, but these are the times we live in.

(Those doing the accusing, by the way, have their own history of fraud, defamation, and apparently widespread misconduct against women, but they’re part of the correct tribe so no biggie.)

Here’s what these signatories, which include hundreds of people with no apparent affiliation to UNR at all, are upset about in their own words, along with some helpful annotations.

--The retraction of the Anti-Racist Student Coalition’s permission to post sandwich boards displaying, in their words, “positive messages for those who have been affected by racism.”

Who is the “their” in “their own words”? What was the actual message? Where was the display?  Why was permission retracted, or if you are going to accuse UNR of stifling student speech, what was the excuse? Why is there not more detail provided about this incident that would let us make up our own mind about the University’s behavior? It’s almost as if further detail would not fit the narrative here…

--The arrests of a UNR student who brought a sign reading “Abolish ICE” to the UNR stadium, and who argued with campus TPUSA members and knocked over their display table. Both arrests were carried out by the Reno Police Department with no apparent attempt to resolve conflict through campus resources, and no communication with the campus community.

Yes – when you physically attack the property of others engaged in their own free speech, or heckle in an attempt to shut down the speaker, you’re committing a crime as well as attempting to violate other peoples’ civil rights, and your behavior should be stopped by the authorities.   Police have no obligation to “resolve conflicts” between criminal and victim in such a scenario, except to remove the disturbance from an otherwise peaceable assembly.

--No apparent consequences for TPUSA members tearing down anti-racist artwork and signage and verbally intimidating students of color, as occurred on October 4, 2019 in The Center.

The irony here is intense. If “progressives” are allowed to kick over tables or shout down speakers without consequence, isn’t tearing down artwork a legitimate political tactic? If such a thing happened, it’s reprehensible, but the lack of detail in this statement makes me think the word “intimidating” is used here to mean “said something I disagree with.” If the conduct was really that bad, this letter wouldn’t have to be so tellingly vague on the details.

--No apparent consequences for those responsible for racist vandalism on campus, including swastikas, items with Ku Klux Klan insignia, and anti-black messages.

Do you have a suspect? Didn’t think so. If there was one, do you really think such a person would not have been charged by now, if not at least shamed on social media? Without an actual perpetrator to punish, what should Johnson do? Collective punishment until the graffiti artist is found? Prison-esque tosses of dorm rooms to look for spray paint or white hoods?

How horrifying that the left’s disdain for due process is so widespread that it extends from the President himself to judicial nominees to college students at large. Whatever harm a graffitied swastika may cause, even assuming it’s not a hoax like so many other manufactured racist incidents lately, it’s nothing compared to politically motivated mobs who insist on “doing something” to abridge civil rights in the name of a little temporary public safety.

What’s especially disgusting is the attempt to link a standard issue right-of-center political student group with bigoted vandalism. There is zero evidence to make that connection. None. To the extent virulent anti-Semitism finds any purchase in American politics, it always seems to be found on the left.

--No apparent consequences for those responsible for racist and anti-LGBTQ speech online, including video apparently showing UNR students burning a LGBTQ pride flag.

As anyone with a high school level education on American government would know, it would be illegal to mete out consequences for such conduct. As someone who supported gay marriage when Sen. Barrack Obama was still insisting that marriage was between a man and a woman, I think it takes a special kind of POS to burn a pride flag, which as a veteran is also how I feel about losers and ingrates who burn American flags. And yet as a lover of freedom, I will fight to the end to protect an individual’s right to be that POS because the consequences of censorship are always worse than whatever “wrong” idea was being censored in the first place.

Racist speech is similarly protected, which is fortunate for all my far-left friends who want to dictate what people are allowed to say, sing, dress, watch, behave, vote, or otherwise conduct themselves on the basis of race (all in the name of preventing cultural appropriation, and all for the noblest reasons, but racist nevertheless). If disgusting and offensive speech isn’t protected, no expression is protected. It’s especially ironic seeing academics, whose often absurdly privileged careers only exist because others fought so hard for these principles, failing so miserably to think through the potential consequences of getting what they say they want.

--Failure to monitor or otherwise counter harassment of individual faculty, including attempts to infringe faculty speech and academic freedom.

“Failure to monitor?” What are we, communist China where everyone’s social media is constantly surveilled by government minders for various thoughtcrimes?

University faculty are entitled to say what they want, even as the government employees they are. But when they say stupid things, be it in a classroom or on Twitter, any other citizen is allowed to criticize, respond to, or even mock them. If those faculty members defame others, or as agents of the government attempt to regulate the content of student speech they disagree with, then they are subject to legal action. This isn’t “harassment,” it’s an organization or individual standing up for its rights and ideas. I would love to see a single example of a university professor who has been silenced because of a right-leaning political action group. I know it hasn’t happened, because if it did, we’d have details to go with all this scare-mongering.

So far, UNR has resisted the totalitarian impulses of their more radical students and staff, such as when the school refused to illegally expel their token white nationalist loser, Peter Cvjetanovic, after he became the face of the Charlottesville, Virginia rally two years ago. I hope once again President Johnson will continue to do the right thing, and stand strong for freedom and liberty for all.

And if TPUSA is the dangerous monster its critics contend? Sunlight is the best disinfectant. Every one of us has the same free speech rights – use them to full effect. Expose what you don’t like and counter it with your own ideas. That’s how America has always worked best. In fact, I would love to get every single member of our  congressional delegation on record as to how they feel about this effort to stifle free expression at UNR, and what they plan to do to protect the rights of the conservative students there.

It’s low hanging fruit to make fun of the overwrought lefties every university in the country seems to be saddled with these days. I kind of feel sorry for them, honestly – you would think that academics chose their careers based on a desire to engage in a free exchange of diverse ideas. Testing your own thoughts in the crucible of open debate is exhilarating and fun and rewarding for the intellectually honest and the open-minded. A professor unwilling to hear ideas he or she disagrees with is like a sailor in a world without oceans. What a meaningless, empty life it must be.

But this attitude is spreading throughout the political left, and has real consequences to our nation and the world at large. For example, I wonder how many people condemning TPUSA or President Trump or any other Republican leaning figure are equal in their protestations about American companies assisting China in silencing its critics or oppressing its people?  China is a communist nation which, like all communist nations, exists on the same moral plane as Nazi Germany. It’s currently cracking down on its last free conclave because Hong Kongers are insisting on keeping their God-given civil rights. And yet Americans are being kicked out of NBA games in American cities because they wore shirts or held signs supporting Hong Kong freedom activists – all in the name of either profits or not “offending” a trade partner. Nike – “Stand for something, even if it costs you everything” itself – has pulled merchandise associated with Hong Kong supporting athletes from Chinese store shelves. If you care about repression rather than partisan hackery, there are plenty of more legitimate targets for your protests than Charlie Kirk.

Spoiled UNR academics are a long way from the oppression of communist dictatorships. But why take even a single step in that direction?  Without a commitment to free speech, starting at the local level, we cannot commit to freedom in general, here or abroad. Every single American who values our extraordinary way of life must loudly and unequivocally condemn such attempts to restrict any speaker, idea, or political organization, even while we embrace their right to be heard.