To an outside observer, SB355 seems like one of the top battles of the 2019 Legislature.

It’s a bill that sparked a fight drawing in top lobbyists, last-minute amendments, lengthy hearings and even a contentious (and disputed) legal opinion from legislative attorneys.

But the bill doesn’t deal with headline-friendly topics such as education, minimum wage or raising taxes.

Rather, it’s all about acupuncture — namely whether the state board of physical therapy can authorize the practice of dry-needling against the wishes of the State Board of Oriental Medicine.

How such a limited topic drew in some of the state’s top lobbyists and chewed up a significant amount of time in the 120-day legislative session has come about mostly for one reason — the ability of the state’s 31 occupational licensing boards to hire professional contract lobbyists.

“Without a doubt, this is heavily lobbied and they’ve brought a lot of people around,” bill sponsor Democratic Sen. David Parks said. “Every occupational board is trying to protect their turf, and they don’t want anybody to invade their territory.”

Although local governments and school districts can and have hired lobbyists in addition to their in-house lobbying teams, the state’s numerous occupational licensing boards — typically composed of industry professionals appointed by the governor — stand unique as the only state-level agencies with the power to hire professional lobbyists.

But hiring lobbyists doesn’t come cheap; according to reports filed with the Interim Finance Committee earlier this month, at least 21 state boards and commissions spent more than $577,000 for outside contract lobbyists and public relations throughout 2018. Although licensing boards aren’t funded by the state (instead operating off on fees from licensees), they’re given wide authority by the state Legislature and governor — who appoints board members — to oversee, regulate and license more than 50 professions in the state representing an estimated 28 percent of the state’s workforce.

Lobbyists for the boards say the arrangement is beneficial; boards and commissions typically don’t have the staff or financial ability to employ full-time lobbyists and hiring an experienced lobbyist to shepherd legislation or keep tabs on bills or measures that could affect their operations is an important and necessary function for state boards.

Susan Fisher, a longtime lobbyist for the McDonald Carano law firm, said her representation was a better cost value for an entity like the State Board of Osteopathic Medicine, which can’t afford a full-time lobbyist or to have their executive director camped out in the Legislature for 120 days amid their other duties as a board.

“They don't have somebody that they can spare to come here full time and when there's something going on, you tend to need to be around a lot,” she said. “You can't just float in on the day of the hearing and float out. You need to be here and you've got to work the committee and educate people on the issues before it's ever even heard.”

Fisher said that arrangement works out as long as the firm avoids conflicts, such as representing boards with potentially overlapping areas of practice or a professional association in the same industry.

“Since I'm representing the Osteopathic Medicine (Board), I would not be able to represent the Board of Medical Examiners, which is very well-represented anyway,” she said. “I couldn't do both of those because a lot of the time we're lock step, on the same page, but just to be on the safe side, once in a while we may not be.”

Compensation for lobbying contracts is typically done through retainer, as opposed to a certain per-hour wage. The median amount spent by the 21 boards on lobbyists is just north of $21,000, though certain boards pay more depending on the scope of lobbying work — from just monitoring bills to actively pushing for specific legislation. Three boards — Board of Examiners for Social Workers, Podiatry and Psychological Examiners — either did not file reports with the state despite having a registered lobbyist or didn’t report compensation totals on their report.

Payments to lobbyists also vary widely; on the top end, the Contractors Board paid $144,000 to the Ferraro Group for lobbying and public relations, while on the lower end the State Board of Dispensing Opticians paid just $1,500 in 2018 to lobbyist Neena Laxalt. The spending totals are available under a 2013 state law requiring state boards and commissions, school districts and higher education institutions to publicly disclose spending on any consultants every six months.

Michael Hillberby, a lobbyist with Kaempfer Crowell who represents three occupational boards (Accountancy, Nursing and Pharmacy), said part of his job was having the expertise and knowledge to know what was possible in the current, Democratic-controlled Legislature. He said the nursing board has long had the goal of joining an interstate nursing compact, but that the political clout and opposition from the Service Employees International Union made such a goal unattainable.

“I regularly go to the board meetings, walk through here's all the people we met with, here's the strategy we laid out, here's what we've done,” he said. “But ultimately it comes down to this, and this is a tough environment to do that.”

Beyond shepherding bills, Hillerby said his work includes monitoring bills that affect boards in other ways, such as open meeting law changes or noticing requirements. But he said often the most difficult aspect was navigating through the choppy waters of dispute that arose when boards tangled over overlapping areas of regulation — such as in the battle between physical therapists and the Oriental Medicine Board over dry-needling.

“I think of staying out of those turf battle issues between professions are always tough, and it's not much fun for legislators,” he said. “The boards really need to be there to answer questions about how they would regulate it.”

Like Fisher, Hillerby said it was easier for licensing boards to contract with outside lobbyists rather than pay for a full-time staff lobbyist. But at least some groups, including the conservative-leaning Foundation for Government Accountability, have advocated for prohibiting occupational licensing boards from hiring contract lobbyists amid concerns that it allows boards to consolidate power and limit competition.

The conservative-leaning Nevada Policy Research Institute, long a critic of what it calls Nevada’s overburdensome occupational licensing laws, cited a 2015 report by former President Barack Obama’s administration that stated a ”licensed profession’s degree of political influence is one of the most important factors in determining whether States regulate that occupation.”

“In other words, the lobbyists for these boards are the reason Nevada has such an oppressive licensing regime,” NPRI’s Robert Fellner wrote in an email. “No licensing board is ever going to argue for its own elimination, even when that is the right thing to do.”

At least 10 states have some limits on the ability of state agencies to hire lobbyists, and Arizona Gov. Doug Ducey in 2016 issued an executive order in 2016 prohibiting licensing boards from hiring contract lobbyists.

The boards in Nevada, though, are granted a certain amount of autonomy. Former Gov. Brian Sandoval expressed some frustration with having to “bang heads” with occupational licensing boards and commissions, saying the offices tended to act independently and ignore directives from his office.

“I do feel like some of the boards and commissions feel like they’re autonomous, and they don’t answer to anyone, and once I’ve made an appointment, that’s it,” he said at an audit meeting in June 2018.

Other governmental agencies also contract with outside lobbyists, though typically they don’t operate at the state level. The Clark County School District has 12 people registered as lobbyists in Carson City, seven of which are contract lobbyists and don’t work directly for the school district. Several local governments, including the city governments of Reno, Las Vegas, Fernley, Henderson, Sparks and Mesquite, employ a mix of contract lobbyists and individuals employed by those government entities. 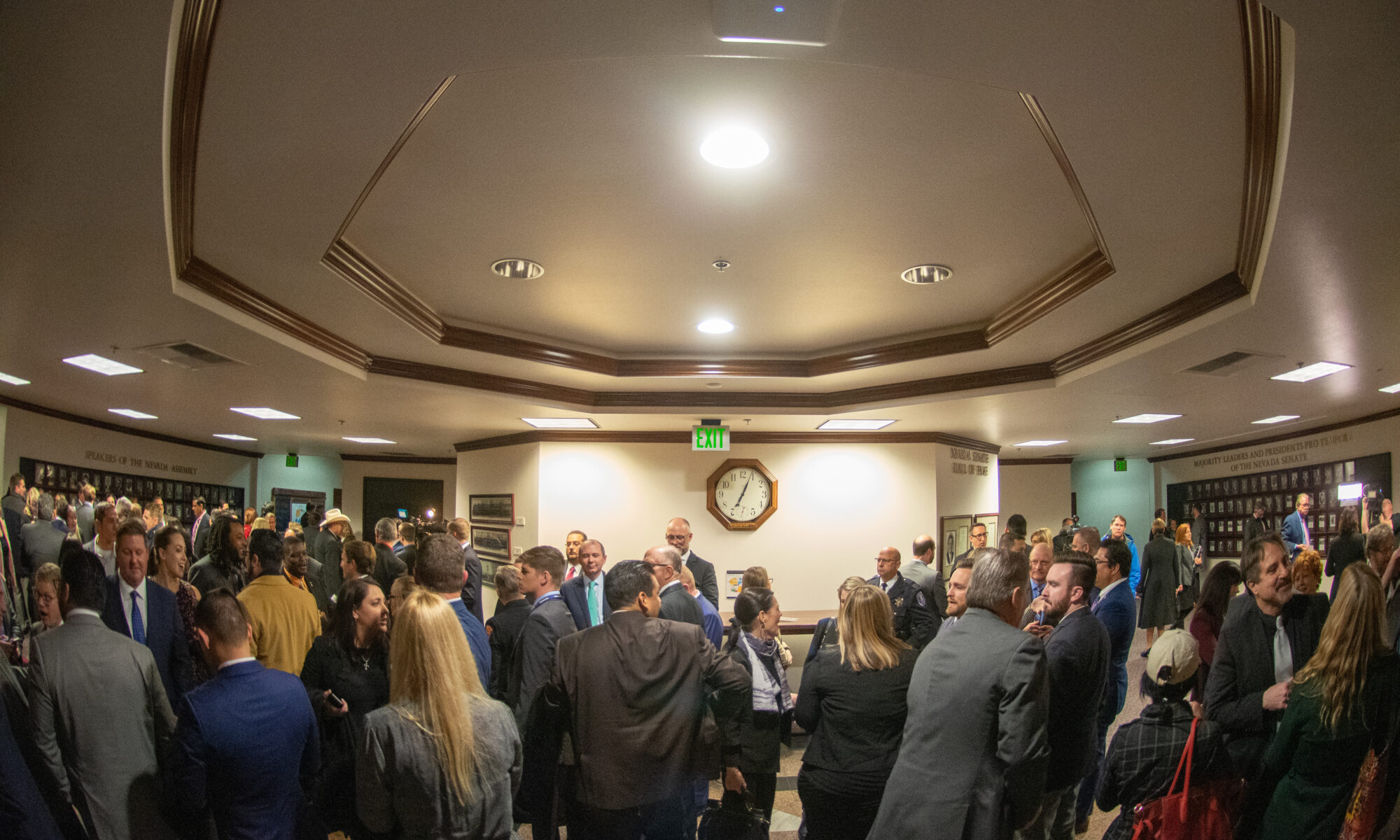 In 2018, more than 240 lawyers, law firms or law-related PACs donated roughly $630,000 to 56 legislators, good for nearly 6 percent of all contributions to lawmakers during campaign cycle.

The figure — 38 percent smaller than the $1.03 million lawyers spent in the last cycle — represents a sharp decline for the 2018 midterms, which overall saw contributions increase by roughly $1 million compared to 2016.

With no presidential race, midterm elections generally see reduced interest from the electorate, equating to generally lower campaign fundraising totals across the board.

Nearly half of the money spent on legislators by lawyers and law firms came from Citizens for Justice, a political action committee representing the trial lawyer-comprised Nevada Justice Association. In total the group gave 54 legislators across both parties $305,000, with a median individual contribution of $2,500.

Outside the Citizens for Justice PAC, there were very few prototypical “large donors,” as many individual lawyers or law firms gave just one or two legislators anywhere from $200 to $5,000. Only three law firms — Las Vegas-based Eglet Prince ($68,000) and national firms Dickinson Wright ($16,500) and Holland & Hart ($13,750), each with branches in Las Vegas — gave more than $10,000, a stark contrast to industrial donors which often give on the order of hundreds of thousands of dollars.

Although The Nevada Independent’s analysis covers a vast majority of campaign spending by law firms, it leaves out firms which lobby for corporate clients during the legislative session, including Lewis Roca Rothberger Christie and McDonald Carano. Contributions from these firms and their employees will be profiled in the coming weeks as our Follow the Money series continues.

The four senators not receiving contributions were not up for re-election in 2018.

Members of the 42-person Assembly took in a majority of total law firm donations, with $380,000 to the Senate’s $251,000. Assembly members also took in slightly more on average than their upper-chamber counterparts, $1,248 to $1,129 respectively.

As always, we’ve triple-checked the math. But if anything seems off, feel free to contact us at jacob@thenvindy.com.