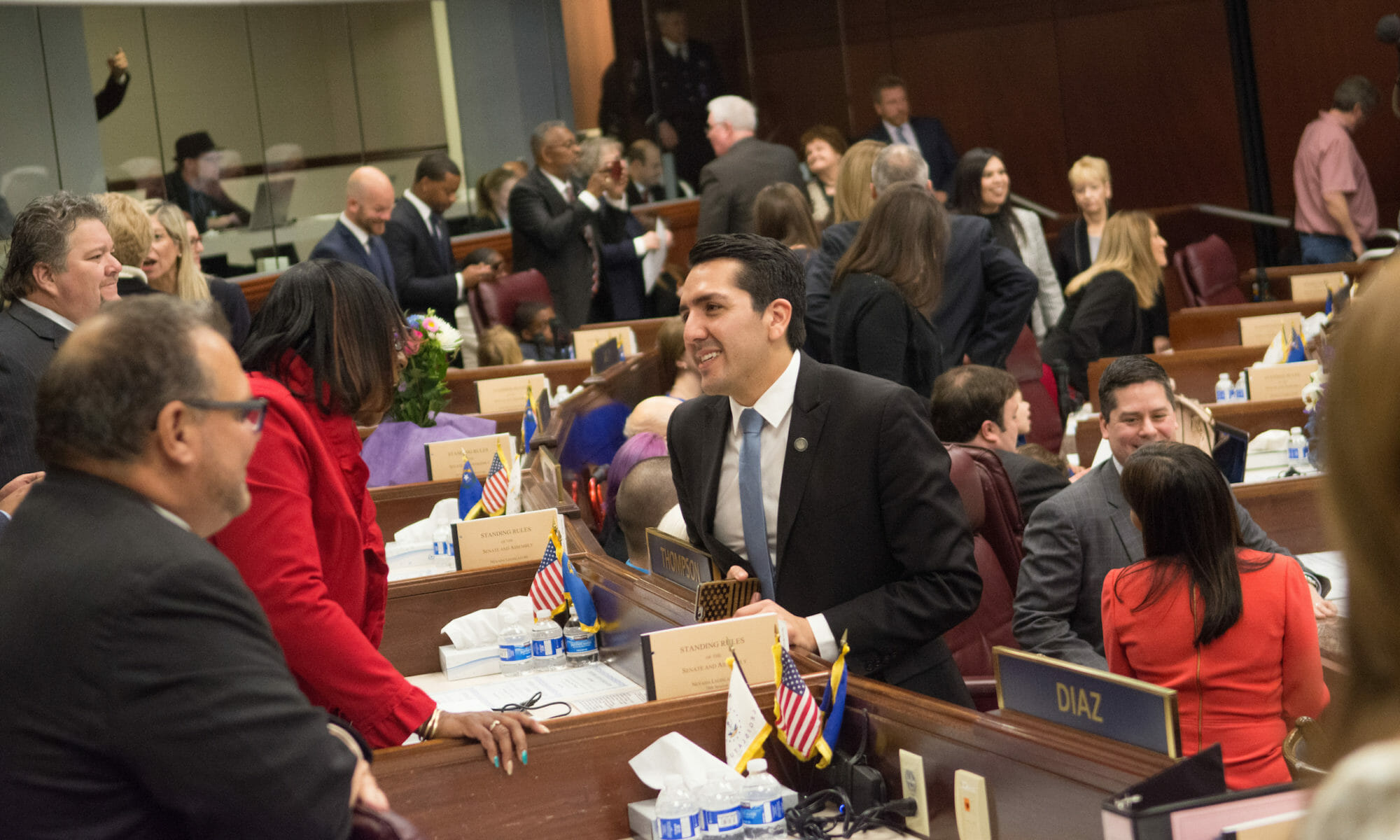 Update 5/1/17: A bipartisan group of senators voted on Monday to support a proposed constitutional amendment to allow couples to marry regardless of gender with a religious exemption clarifying that religious organizations have the right to refuse to perform same-sex marriages.

The Senate passed AJR2, which will remove the “one man, one woman” marriage provision from the Nevada Constitution, 19-2, with Republican Sens. Don Gustavson and Joe Hardy in opposition. The measure now returns to the Assembly, which passed the bill in March on an an almost party-line vote — 27-14, with Republican Assemblywoman Lisa Krasner joining the Democrats in support — for concurrence on the religious exemption amendment.

The resolution will need to be approved by both chambers of the Legislature again in 2019 before heading to a vote of the people in 2020.

Republican Sen. Scott Hammond, who voted against a similar measure two sessions ago, said that the Supreme Court has ruled on same-sex marriage with its decision in Obergefell v. Hodges in 2015. “As a public servant, I have to respect that ruling,” Hammond said.

Hardy said that he believes that same-sex marriages should continue to be recognized as legally binding, but that he still could not support the resolution. “How can we protect the rights of conscience with those who we disagree with? I don’t know,” Hardy said.

Update 3/9/17: The Assembly passed AJR2 on an almost-party line vote, 27-14. Assemblywoman Lisa Krasner was the only Republican to vote in support of the resolution, citing the equal protection clause in the 14th Amendment.

The resolution now heads to the Senate. If successful there, the resolution will again need to be approved by both chambers of the Legislature before heading to a vote of the people in 2020.

Same-sex marriage has been the law of the land for nearly two years after the U.S. Supreme Court’s historic ruling in the summer of 2015.

On its face, it’s a do-nothing resolution. The Supremacy Clause of the U.S. Constitution says that federal law takes precedent over state law, meaning that the U.S. Supreme Court’s ruling overrules what Nevada’s Constitution says.

But those who support same-sex marriage worry that if the U.S. Supreme Court ever overturned its ruling in Obergefell v. Hodges, Nevada would revert to only issuing marriage licenses to heterosexual couples, denying same-sex couples of equal protection under the law and potentially throwing already-married same-sex couples into legal limbo.

“With the election of our new president we do feel these rights and advancements are being threatened,” said Karen Vibe, who with her wife Karen Goody were the first same-sex couple to marry in Washoe County. “We do feel that preventing two people who love each other from marrying would allow our progress as we know it today to regress.”

President Donald Trump said in November that the same-sex marriage issue is “settled” and that he is “fine” with the Supreme Court’s opinion legalizing it. But back in January, Trump told Fox News that he would “be very strong in putting certain judges on the bench that I think maybe could change things” and that he wished that the same-sex marriage issue had been left up to the states to decide.

To amend the Constitution, the Legislature would need to pass AJR2 twice with a simple majority, once in 2017 and again in 2019, after which it would go to a vote of the people in 2020. Araujo said he thinks that there is enough support among Nevadans for the amendment to pass.

“I personally have seen all of the celebration and a state that has evolved over time and has been allowed to accept thy neighbor and embrace each one for their differences. There has been an increased level of understanding and love and compassion,” Araujo said.

Even before the U.S. Supreme Court ruling, a poll commissioned by the Retail Association of Nevada found in 2014 that 57 percent of Nevada voters favored removing the one-man, one-woman provision from the constitution, with only 36 percent of Nevadans opposed.

Pam Roberts, the state co-chair of the Nevada Women’s Lobby, talked about how her wife, Gretchen Miller, wasn’t able to adopt their two sons and had to file special forms to function as a “true parent” of their sons. After the marriage amendment was passed in 2002, Roberts said their family seriously considered leaving Nevada.

Her son, Riley Roberts, said he hoped that the Legislature would pass the resolution to make it harder to revoke the rights of same-sex couples to marry.

“They made a commitment, longer than I’ve been born, to each other for a reason,” he said. “Because they knew they loved each other.”

Despite the tides of popular support for same-sex marriage turning, the resolution faced some pushback both from legislators and conservative activists.

Republican Assemblyman Ira Hansen asked why the bill doesn’t address polygamy, calling it a “discrimination we have right now in our laws.” Democratic Sen. David Parks, who was testifying in support of the bill, said that he didn’t think there was anything that would stop such legislation from being brought forward separately other than the federal prohibition on the practice.

Others opposed to the resolution worried the fact that the plural noun “couples” was used in the amendment’s language meant that it would allow polygamous marriages, though legislative counsel clarified that it would not.

Janine Hansen, a conservative activist who collected signatures to pass the 2002 constitutional amendment, expressed concerns that the amendment would inhibit her ability to exercise her religious liberty.

“I am sincerely concerned about the court cases and other laws that will come forth out of this particular resolution,” Hansen said.

The Assembly Committee on Legislative Operations and Elections took no immediate action on the bill on Tuesday afternoon.