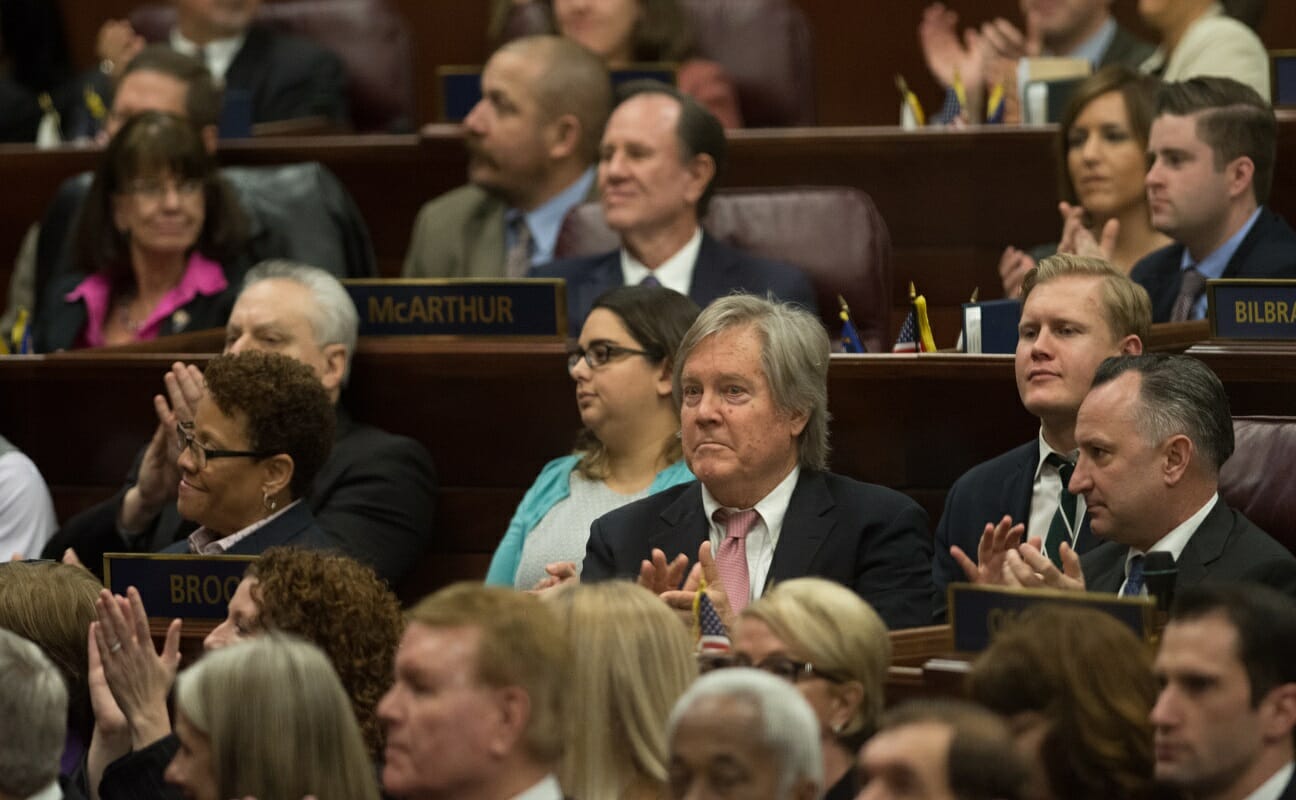 Democrats control both houses of the Nevada Legislature, but progressives hoping to see a large minimum wage increase pass during the upcoming session might not want to get their hopes up.

Despite a consensus among Nevada Democrats to try to raise current minimum wage — a tiered system of $7.25 or $8.25 an hour based on employer-offered health care  — lawmakers have yet to agree on how high to raise the wage as well as any specific legislative path forward.

A minimum wage increase could have a profound effect on Nevada’s economy and many low-wage workers, as more than a third of the state’s workforce makes less than oft-stated progressive goal wage of $15 an hour. Nearly 20 states saw their minimum wage go up at the start of 2017, and progressive lawmakers and groups plan to make a similar push during Nevada’s 120 day legislative session.

No bills have been submitted so far, but lobbyists and legislators on both sides of the issue predict that raising the wage will be one of several Democratic priorities with an uncertain path forward under Republican Gov. Brian Sandoval.

Nevada’s two-tiered minimum wage system places it somewhere in the middle of national rankings. It’s one of 29 states with a minimum wage higher than the federal minimum of $7.25.

But Nevada is unique in not having raised the wage since 2009, the last year the federal wage increased. A National Conference of State Legislatures tally found 19 states increased their minimum wage at the start of 2017, and neighboring states like California, Oregon and Arizona recently passed laws or ballot initiatives increasing their wages.

Voters passed a higher minimum wage into the state constitution in 2006, which also allows the state’s Labor Commissioner to adjust it based on changes to the federal wage or cost of living increases.

Even a small increase in the minimum wage would affect a significant chunk of Nevada’s workforce, which is significantly clustered around low-paying jobs and has a median wage of $16.20 an hour.

Roughly 44,000 people currently make between $7.25 and $8.25 an hour according to state labor statistics, or about 3.8 percent of Nevada workers. About nine percent of the workforce, or more than 104,000 people, have an hourly wage under $9 an hour, and more than a third of the state’s workforce earn less than $15 an hour.

David Cooper, an economist with the left-leaning Economic Policy Institute, estimated more than 535,000 Nevada workers currently make less than $15 an hour. Though the report is based on rough estimates from a national survey, Cooper said the ballpark estimate indicates what even a small increase in the wage would do.

“Even middle class folks realize that they would be making more if minimum wage went up,” he said.

Business groups and lobbyists caution that raising the wage could damage businesses that employ many low-wage workers, and that a higher minimum wage in Las Vegas might not work for businesses in rural Nevada.

“It’s one of those things that sounds good in practice and it certainly helps (legislators) get votes and they can stand on the stump and say they’re for working people, when in fact there’s not a lot of evidence (that it helps workers),” Reno Chamber lobbyist Tray Abney said.

One tool economists use to measure the impact of raising the wage through comparing the ratio of the minimum wage to workers in the middle of the income spectrum, with a higher ratio signifying a higher risk for job losses. The New York Times Upshot blog analyzed those ratios for several American cities under a hypothetical $15 an hour wage, and found that Las Vegas had one of the highest ratios.

This isn’t the first time that activists and lawmakers have pushed to raise the minimum wage — Democratic Sen. Tick Segerblom unsuccessfully pushed for a $15 an hour constitutional change during the 2015 legislative session, and a measure sponsored by Republican Sen. Patricia Farley revamping overtime rules and raising the wage to $9 an hour fell in the final hours of the session.

An organization of progressive groups quietly dropped a proposed ballot measure in early 2016 that sought to raise the wage to $13 an hour by 2024.

Democrats have two realistic paths to increase the minimum wage — either starting the constitutional amendment process or through trying to pass an increase into state law that could take effect much sooner.

Neither path is easy. A constitutional amendment requires approval in two subsequent sessions and then approval by voters in a general election, meaning any increase wouldn’t take effect until at least 2020, and advocates would likely need to wage a costly campaign to support the ballot measure.

But that process, which only requires a simple majority vote and no approval from Sandoval, might be easier to push through than a change in state law which could theoretically raise the wage much sooner.

Changing the wage floor through legislation has its own roadblocks. Democrats don’t hold a two-thirds majority necessary to override a possible gubernatorial veto, and Republican leadership is generally skeptical of any increase without some sort of concession or changes to existing labor laws.

“Not that I’m against a minimum wage, I just think arbitrarily setting it at some anecdotal number is just political posturing and nothing more,” Republican Assembly Leader Paul Anderson said. “There’s no economic reasoning for it.”

Republican Senate Minority Leader Michael Roberson said he would support similar legislation in the last session that raised the wage to $9 an hour but also modified how overtime is calculated. Democrats largely opposed the bill despite supporting the wage hike, citing concerns with rolling back how certain workers earn overtime to only those working over 40 hours a week.

Democratic state Sen. Tick Segerblom, who introduced a $15 an hour minimum wage amendment in 2015, said he thought Democratic legislators generally wouldn’t be interested in rolling back labor law to get a small increase in the wage.

“I don’t know how much (Republicans) are going to fight,” he said. “If it involves any kind of a trade-off, as far as overtime, or prevailing wage or anything like that, it’s just not going to happen. I think we might be content to just wait it out with a constitutional amendment or hopefully get a Democratic governor in 2018.”

Segerblom said it’s possible that Sandoval could sign on to a smaller increase to the wage, but many lobbyists and lawmakers interviewed by The Nevada Independent said it will likely become one of many bargaining points between the governor and Democratic leadership hammered out before the end of session.

Randi Thompson, a lobbyist for the National Federation of Small Businesses, said she wasn’t sure how Sandoval would view the minimum wage issue but wouldn’t be surprised to see it used as a bargaining chip for his other legislative goals.

“I don’t know if the governor would be willing to give up minimum wage if he could, say, get (Educational Savings Account) funding, she said. “And I wouldn’t blame him, he’s got his priorities.”

A spokeswoman for Sandoval said the governor does not comment on “hypothetical legislation.”

Democratic sources said legislative leadership plans to raise the wage in a “timely fashion,” but stressed that plans of action were in flux and no consensus on a higher wage has been reached, although leaders would want an incremental increase and are looking at nearby states that recently raised their wages as examples.

More details will likely be available when Democrats unveil their updated legislative playbook — The Nevada Blueprint — in early February.

Democratic lawmakers themselves aren’t monolithically supportive of hiking the wage to $15 an hour. Several lawmakers contacted by The Nevada Independent spoke in general terms about supporting a higher wage, without giving a specific figure that they would support. The 2016 Nevada Democratic Party platform calls for a “living wage” without any specifics given.

Warren Hardy, a former state senator and lobbyist for Nevada Restaurant Association, said he would categorize several incoming legislators as “pro-businesses” Democrats who might be willing to consider a smaller wage hike and other concessions to the business community. He said businesses and Republicans may not be reflexively opposed to a smaller wage hike if paired with other concessions.

“I don’t sense that the Republicans are opposed to a reasonable increase in the minimum wage, as long as it takes into account other factors which is what we’re going to be talking about, he said. “But the Democrats, I think it’s very high on their priority list.”

Lawmakers will also face pressure from progressive groups like PLAN, which called for a higher state minimum wage in their pre-session address. The group’s communications director, Laura Martin, noted that several incoming legislators attended “Fight for 15” rallies throughout the 2016 campaign and are now in a position to implement progressive policies.

“I think the minimum wage conversation is really going to expose people’s values for what they are,” Martin said. “We just spent how many special legislative sessions on projects that we still don’t know will ever be successful. But we can’t ask people to raise their wages for their employees 25 cents, a dollar, for fear that the Antichrist will come?”

But negotiations could quickly backfire. A restaurant association attorney sent a letter to legislators in the last session warning that legislative action increasing the wage could violate the state constitution and invite legal challenges, though the state’s Legislative Counsel Bureau said no constitutional conflict existed.

Segerblom said he hopes Sandoval, who is termed out of office in 2018, will be more willing to work with Democrats because he doesn’t have to worry about running for re-election.

“I think there’s a real chance that there’s a lot of progressive legislation he will sign, because it’s the national mood, it’s the right thing to do, and it’s not like he has to worry about running for re-election or what’s the Republican base going to think about or whatever,” he said.