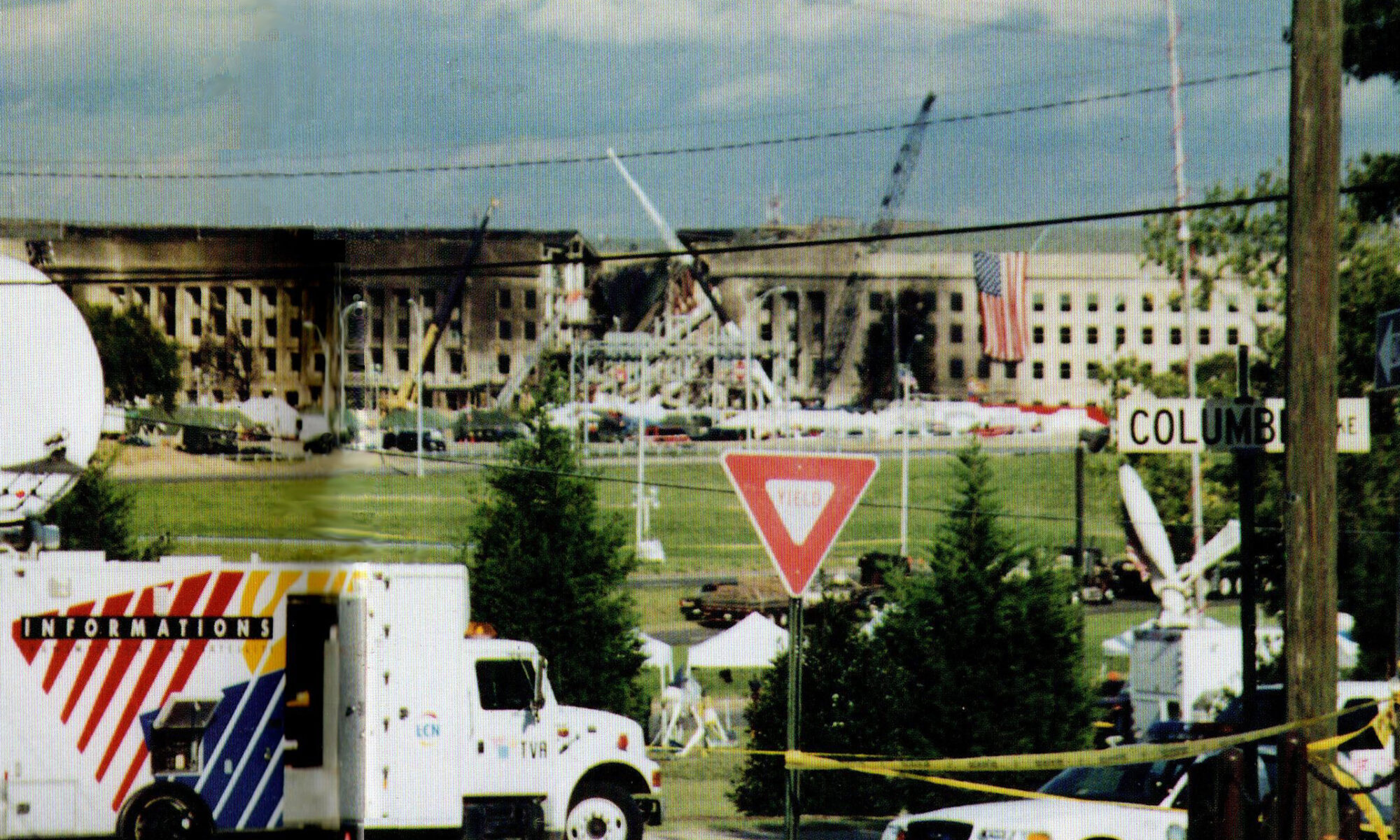 On September 11, 2001, I was in Washington, D.C., on business. I had taken my 11-year-old son with me to learn some history and civics in person. On New Years' 1997, we’d had our rented home destroyed by the rampaging Carson River and this—I thought—would help celebrate our return to normalcy. Little did I know….

In our first two days we explored the aquarium, the museums, the Metro, and the D.C. Ducks, and we visited the Pentagon, briefly planning to come back later for a tour.

On 9/11, my son stayed in the nearby hotel while I went to my seminar near the State Department. But soon fire alarms went off and there was news of the World Trade Center attack; then we learned that the explosions we’d heard were a plane hitting the Pentagon. We were urged to leave the building and, if possible, the district. I hurried back to my hotel on foot, as the police directing traffic told me that they believed the White House had also been attacked. Their fear was palpable

At the hotel I was relieved to find my son still sleeping. I woke him and told him what I knew. Cell service was jammed but thankfully we got through on the hotel phone to his older brother in Nevada; he patched us through to my husband, who was also away on business. We reassured them, but then we had to decide what to do.

We mutually decided to take just the basics, put it in two small rolling bags, and head out to an open area. We figured we could then decide if we needed to walk out of the district. However, at the back entrance we met the seasoned head bellman. “What y’all doing?” he asked. We told him. “Ah, now,” he said, “the President has scrambled the fighter jets. He’s shut down air traffic. He’s secured the city. The safest place for y’all is to stay right here! Let me take your bags back to the room and y’all go have lunch.” Of course he was right; what a wonderful man!

Lunch wasn’t exactly relaxed, but it was calming. Of course, the TV was on to bring the evolving news to all there. When we returned to our room, I turned on the TV and tried to understand. At this point I should have realized that normalcy was what my son needed more than the news that I wanted. At almost 12, my son was smart and brave and capable of dealing with this emergency, but he was still a child; he needed me to insulate him from what was happening.

We heard the President’s message to stay home for the rest of 9/11 but the next day go back to business as usual. We did our best by doing some of the tourist things we’d planned. However, I can’t remember much about where we went. What I do recall is avoiding a paper bag left on the mall and how nervous the newly armed guards were.

On Thursday we had our Nevada “breakfast with senators” and learned their experiences and those of their staff members. At night I’d call Southwest Airlines and see what they knew. Finally Southwest notified me that we could fly out of Baltimore on Saturday.

On Friday, we went to visit an editor and he sent us off to the Newseum. There I immersed myself in the news while Colin enjoyed things that had nothing to do with the attack. A reporter advised us to go see the Pentagon before we left; we’d been part of this story, we needed to see the disaster ourselves in order to deal with it. He was so right!

It was challenging near the Pentagon to keep away from the areas where victims’ families were being interviewed. Some kind soul told us to take a cab; the cabbies knew how to view it. The police had set up a regular route: up the street, circle at the end, come back. Colin took a picture with my old camera. I am very grateful for good advice from strangers and for that photo!

It was a long trip getting home, with delays and multiple flights and waits for crews, but we were out of Washington and on our way home! I felt guilty leaving my colleagues in the district, but I needed to get my child HOME!

However, home was more surreal than Washington, especially for our son at school. People could not seem to understand why this was more challenging for him than for the other kids. This is where the picture he took came to our rescue; it helped people realize that his was a different experience from theirs.

I know our son suffered from and may still suffer from PTSD. Two major traumas in a row, plus a significant health scare a few years later, changed him forever. As the trauma of COVID and wildfires keep teaching us, and the underlying reality of climate change promises, nothing is permanent. You need to try to get joy today, but you can’t react by giving up and doing no planning for tomorrow. Nothing is certain but family is precious; our sons are our best friends. Don’t let petty squabbles or even major problems stand between you. Love them now!

Dr. Linda Clements is CEO and owner of Nevada Composites, Inc. In 1992, looking for a more family friendly environment, she moved her family to Dayton—the site of Nevada’s first gold discovery and the state's oldest settlement. Linda's offices look out at the roadbed of the C&C, the restored V&T, the Pony Express Trail, the portal of the Sutro Tunnel, wild horses, turkey vultures soaring on the thermals and the snow-covered Sierra. In her “spare” time, she serves as a board member and manager for C&C Depot Restoration for the Historical Society of Dayton Valley.