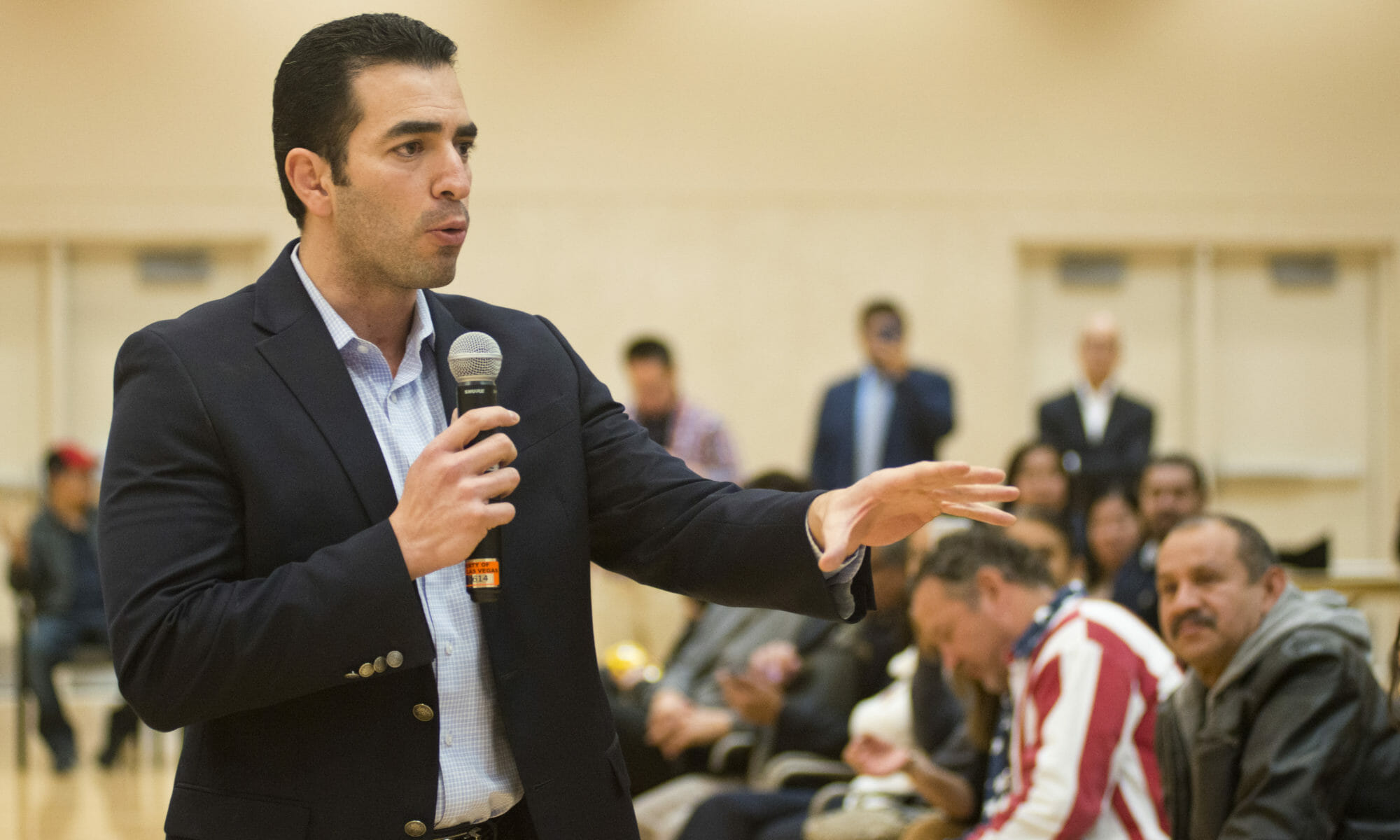 The Nevada Independent – En Espanol is publishing a series of interviews with Hispanics from Nevada who hold political leadership positions in the United States. These Q&A pieces focus on their respective challenges, points of view, and  how they rank the Hispanic community in importance in terms of their work agenda.

We will be providing English translations of those interviews

The Nevada Independent spoke to Congressman Ruben Kihuen about his new role in Washington, his goals, immigration and where he ranks the Hispanic community on his work agenda, as the first Latino to represent the State of Nevada in the United States House of Representatives.

Question (Q): How’s the new office? How do you feel?

Answer (A): I am very grateful for all the people who came out to support my candidacy for Congress last year. This is one of the greatest honors of my life, but at the same time I understand that along with this great honor comes a great responsibility.

This is especially so, as right now we, as a country, are going through a very difficult moment. We have a divided country and a president who is strongly dedicated and who based his campaign to divide this country, particularly by focusing on the immigrant community.

Q: That leads me to the next question, about immigrants.

A: It comes with a very important responsibility. And it is what I have devoted myself to over the past two months since I've been in Congress - defending the rights of immigrants, of the people of Nevada, because everyone, no matter whether you are documented or undocumented, in this country you have rights.

So, we've been kept busy in Washington and I have no doubt that, with all this going on, we will be successful in delivering the justice that the community deserves.

Q: What priority projects do you have on your agenda with your new office?

A: The most important thing I've been working on, over the last two months, is essentially to defend the community. Right now we have a president who wants to deport 11 million people, who wants to build a wall. He says that all immigrants are criminals and rapists and, well, I have a responsibility as an immigrant, as someone who came to this country, thanks to a Republican president, Ronald Reagan. Because of the amnesty in 1986, my family is here.

So, part of my responsibility has been to defend the community and, right now, we have several projects. One of these is to present a bill called the Bridge Act, which is to ensure that young people, who are here because of DACA and who are legally here through the executive order of President Obama, can remain here and have permission to renew their visas.

The other that we are working on, with Congressman Luis Gutiérrez and other Hispanic members of Congress, is for a possible bill that addresses immigration.

In addition, my first bill, one that I introduced two weeks ago, is to train veterans leaving military service to help them find them work where there are no qualified or trained people to fill these positions.

So, that's the first bill, but there are many at the moment. After being here for just two months, we have many plans over the coming months.

Q: And speaking of plans. What's next? Because of the various positions that you have held up until now, being the first Latino serving in Congress to represent Nevada, have you thought of, perhaps, being governor...

A: Right now, I'm very happy to represent District No. 4. Never in my life, after coming to this country at the age of eight, had I ever imagined I would become a politician in this country, in the United States, in the strongest and most powerful country in the world.

So, this is a huge honor. I don’t have any ambitions, nor do I have any other political posts in sight. However, right now, the most important thing we can do is to do the work I was elected to do, and let the community decide on my political career, because, at the end of the day, politics is all about the people and with the support of the people you can get anywhere. If the people don’t give their support, then one cannot make plans.

Q: Tell me about the letter you sent to Kevin McAleenan, acting commissioner for the U.S. Customs and Border Protection.

A: That’s a very good question. Unfortunately, two weeks ago – perhaps, now, almost three weeks ago - members of the Hispanic Caucus asked for a meeting with the ICE Department (U.S. Immigration and Customs Enforcement) to get answers on what's happening with the current raids. Because, we have seen that even innocent people are being detained.

A: Across the entire country, we have seen several, yes. Our office has been approached by people who are at risk of being deported, however, here in Nevada, to our knowledge, there have not been any raids like those in Arizona, California or other states.

Obviously, we need to be made aware and, well, we asked for a meeting with ICE and, a day prior to the meeting, ICE canceled it and decided to have a meeting without the Hispanic Caucus, but we went there - as the ones who had requested the meeting.

So, we went to the meeting. In other words, the meeting went ahead, but it was under the representation of the Republican leadership and Democratic leadership. The meeting was requested and we went there, but they did not let us go in.

In fact, Congressman Luis Gutiérrez was removed from the meeting. This is one of the only times where we have seen a government agency not give a member of the United States Congress, federal legislators, permission to participate in a meeting.

This has no precedent. This is something that has never been heard of here in the federal government and it is something that we should be concerned about, because there are people who have rights in this country and they deserve answers.

When I come back, here to my district, people keep asking me, “Rubén, what's going on? I am innocent, I have no criminal record, so why am I running the risk of being deported?” And, well, there are times when I cannot respond to their questions.

So, for me, my responsibility is to ask ICE for the answers.
In fact, right now, we are waiting to hear about a local meeting to be held with the state director. But, we want answers straight from the top.

Q: So, you have sent the letter. Have you got a reply?

A: We sent the letter and we are still waiting for a response. It was just sent on Friday. We are doing everything possible to get answers and, for now, we haven’t received any. This is unacceptable. This is the most powerful country in the world, established by immigrants.

Unless you are indigenous to this country, we all come from some other place. Right now, we are seeing a government department that is not providing any answers to federal members of congress, which is something to worry about, and that is unfortunately what we are seeing under the presidency of Donald Trump.

And it comes back to the point - we have to get out there and vote. For those of us that are citizens, we have the right to give our community a voice and it is our duty to give a voice to the 11 million strong community of undocumented residents in this country.

We have to get out and vote. I hope we have learned something from this lesson and that during the next election we can stand in record numbers to ensure that the people who support us - and that support immigration reform - are elected.