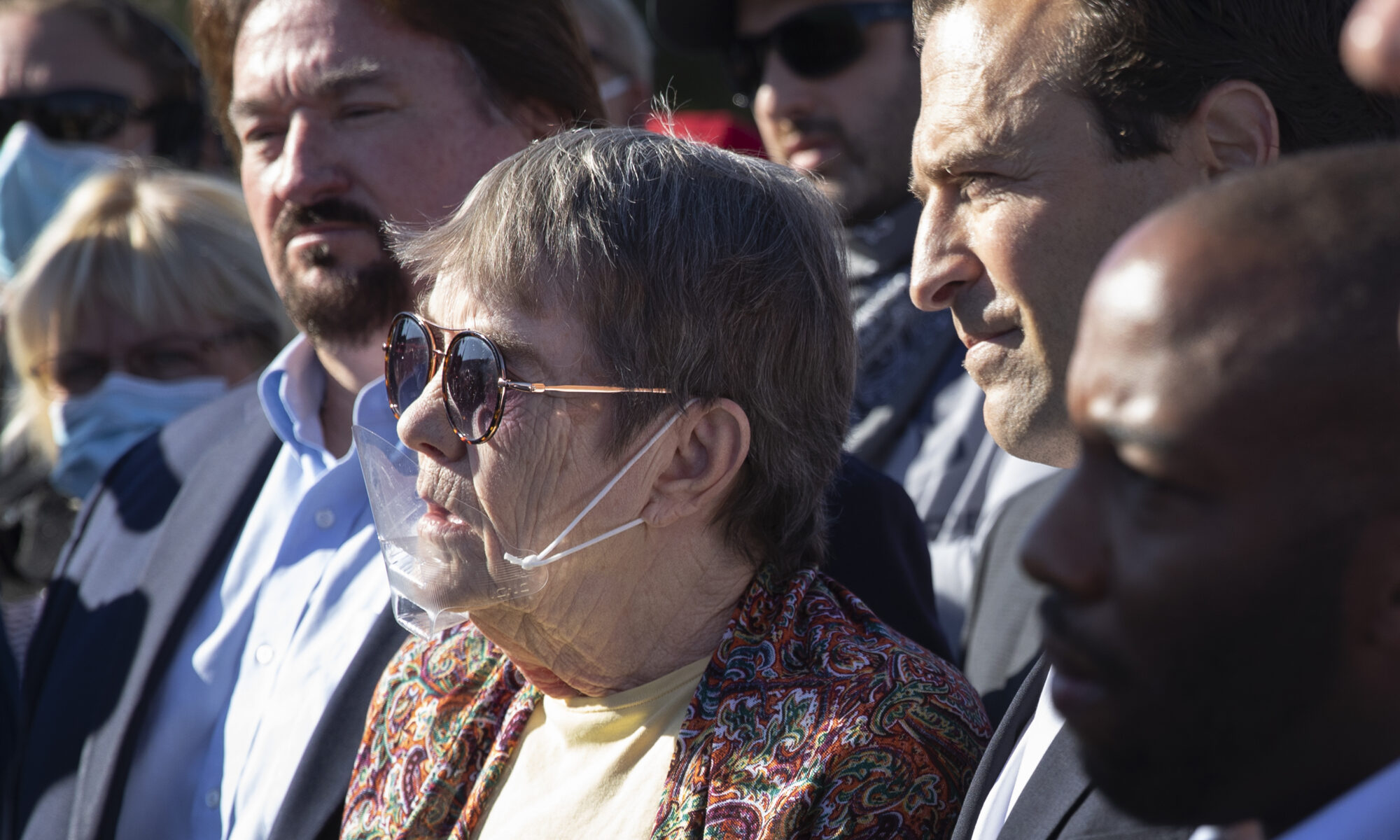 That peroration of The American President Andy Shepherd’s speech, a consummate bit of Sorkinese, has always annoyed me. It seemed overly dramatic, a bit contrived, not…realistic.

Whether Bob Rumson, a preening demagogue full of nasty and empty rhetoric, presaged the rise of Donald Trump interests me less than that we have come to The Time of Unserious People. Nowhere is this more true than Nevada, where Democratic Gov. Steve Sisolak is vulnerable because of politics in the time of COVID and Democratic Sen. Catherine Cortez is at risk because of the American president’s tanking poll numbers. The top of the ticket troubles threaten what has become Democratic hegemony in the state, perhaps foretelling a red wave that causes carnage up and down the ticket, no matter how well the Democrats protect themselves in redistricting.

So, yes, there are opportunities for the GOP, but they are putting forth a gallery of ludicrous gadflies and dangerous opportunists who are echoing Trump’s lies about the 2020 election – often trying to outdo each other with their fantastical claims and promises – and deploying rhetoric in races for important offices that is downright frightening.

Yes, for much of this country’s history, campaigns have been replete with nonsensical verbal pyrotechnics. And, yes, politicians lie, always have, always will.

But this is a different level of mendacity, fabricating fraud claims for political advantage and then fretting that so much of the electorate is worried about “election integrity.” It’s sophistry at its worst and most pernicious.

We are immersed in a polarizing era where challengers are willing to undermine democracy and mortgage their credibility to further their personal ambition in pursuit of power that, if they are successful, they will be unable to wield because of what they have said and done. They will be victims of their own success because they will have only intensified the already deep polarization and will be unable to legislate — even if they want to, which is open to debate.

This is not about a flaming flag or ACLU membership; this is about faith in elections, without which everything else unravels.

This is also not about Democrats or Republicans. There are plenty of great GOP elected officials, moderates (Brian Sandoval, Jill Tolles, Ben Kieckhefer) and righties (Ann O’Connell, Bill Raggio) who have served this state. Too many of the former and current ones have remained silent, though, as their colleagues have been lost to Trump. And people seem to forget that the only prominent GOP officeholder in Nevada, Secretary of State Barbara Cegavske, was a reliable and often hyperpartisan conservative in the Legislature but stood tall and lived by her oath during the 2020 shenanigans.

This is also not about whether Democrats would do the same if the roles were reversed. That’s academic, and I am concerned with the here and now. I am greatly worried about what is to come and what it portends for the future of the state and the republic. (I hope that didn’t sound like Sorkinese…)

The fish rots from the head, and the disease here is most evident at the top — i.e. the GOP primary in the governor’s race. And the serially irresponsible gubernatorial candidates simply give permission to lower-ticket candidates to embrace the same garbage.

I expect very little from Joey Gilbert, a former boxer who seems punch drunk when going on (and on) about stolen elections and hydroxychloroquine and who was there at the Capitol on Jan. 6. Nor do I have any hopes for Las Vegas City Councilwoman Michele Fiore, who once said cancer is a fungus among other inanities and who still bows at the Trump altar while trying to fend off an FBI probe.

These are not serious people and they should not be taken seriously by anyone – the media, their foes, the public. That either could win (it’s unlikely but possible) in a multi-way primary that could have low turnout is a bright neon sign of the times.

North Las Vegas Mayor John Lee, an opportunistic party switcher who installed his surrogate son as city manager in a pseudo-nepotism move still being litigated, has never been taken seriously by most folks in politics. He has almost zero chance to win the primary, but he, too, has nodded to the election fraud nonsense and praised the discredited Arizona audit.

The biggest disappointment and the author of perhaps the most damaging statements in that race is former Serious Man Dean Heller. Heller was once admired by denizens of both parties as a reform-minded, maverick secretary of state. But he has since degenerated into a windsock and Trump suck-up who said to his false idol in 2018 when Heller was running for re-election to the U.S. Senate: “I think everything you touch turns to gold.”

As if determined to show that embarrassing quote was only the beginning of his descent into rhetorical madness and pandering prostration, Heller entered the governor’s race by showing that his self-respect is now officially gone.

Not only has he refused to say President Biden’s name, Heller has said the last fraud-free election was when he was secretary of state a decade and a half ago and also said he would have fired Clark County Registrar Joe Gloria, a respected election official pilloried in 2020 for…doing his job.

This would be laughable and pitiable if it were not so terrifying: A former U.S. senator making irresponsible and dangerous statements simply to make amends with a base – and a former president! – that is skeptical of his bonafides.

The only candidate behaving in a semi-serious manner is Clark County Sheriff Joe Lombardo, who now must be considered the frontrunner. But even Lombardo, surely on the advice of his impressive consulting team that includes Trump’s former political director, has nodded toward the fraud shibboleth that is now an essential ticket for entry into a Republican contest.

“Sisolak signed a law creating the dangerous process of ballot harvesting, and another one that increased voter fraud by mailing a ballot to every voter,” Lombardo frothed in one fundraising email.

If he and others simply wanted to have a debate about ballot harvesting, about universal mail balloting, about unclean voter rolls, fine. I’m all for it. But that’s not what this is about – it is about inflaming a base, where more than two-thirds believe the 2020 election was stolen – instead of dousing this fire that will consume them, too, eventually.

All of this is even more evident in the state’s other marquee race, where Adam Laxalt is carrying the banner of voter fraud while prattling on about “woke leftists” and kids being “taught to hate each other.” The Most Unserious Man in Nevada has been exploiting and tarnishing his grandfather’s good name since he moved here a decade ago, has morphed from an attorney general who thought he worked for Sheldon Adelson to a gubernatorial candidate who didn’t know what was in the state budget to a U.S. Senate candidate who led the fraud caucus after the election last year.

Laxalt, along with a gaggle of local and national Trumpers, made all manner of accusations with no evidence, including sliming his fellow veterans who don’t live in the state by accusing them of illegal voting and even trotting out a supposed victim of voter fraud now accused of...voter fraud. He led the effort here in Nevada in news conferences, on social media and in court until it collapsed and then he disappeared from public sight for most of this year.

The man who led The Fraud Caucus is now the leader of The Unserious Caucus, endorsed by Trump and full of talking points and fury, signifying he is not qualified for elective office here or anywhere he chooses to carpetbag.

A candidate by any other name already would have been laughed out of the state. But this is not funny, and he is the epitome of the dangerously hollow man who already has said he will file lawsuits next year to “try to tighten up the election.”

That he could win should petrify serious people of both parties. What he is doing, the movement he is leading here undermines everything he and others claim to hold dear.

It’s occurring – and will continue – down the ticket, too. With secretary of state pivotal now that elections have come under assault, GOP hopeful Jim Marchant has become a full-fledged election denier and his chances should be smothered with a My Pillow. Instead, he is probably the GOP frontrunner.

Others, such as congressional hopeful April Becker, cried fraud in 2020 and still won’t answer questions about whether Biden was duly elected. And lawmakers seeking promotions – including current GOP Assembly Leader Robin Titus and former Leader Jim Wheeler – cried or implied fraud last year and are enabling Carson City candidates to do the same.

What exacerbates this situation is that there are serious issues to debate in the race for the state’s most important office – and others, too.

Debate the governor’s COVID-era policies, his use of emergency powers, his responsibility for the economy. Say what you would have done or will do.

Debate whether Democratic Sen. Catherine Cortez Masto is simply a rubber stamp for Biden, whose missteps in Afghanistan and other issues deserve a robust dialogue. Debate whether she has been an effective senator for Nevada.

Debate whether the Democrats deserve to continue to lead in Carson City or if they abused their tripartite control and made the state weaker. So much fodder there.

I’m no Pollyanna; I get that there always will be nonsensical, hot-button issues designed to drive voters. But in these races – and others – you suddenly have these faux Patrick Henrys preaching about freedom and a Constitution most either don’t understand or have not read while occasionally proving Godwin’s Law.

To what end? The end of the republic, I fear.

These unserious men and women have decided to ride the tiger with no regard to the consequences. Make no mistake: I believe those who seek to undermine democracy should be disqualified from serving in it. They are not patriots; they are insurrectionists.

In Nevada, this stuff is undergirded by a logical fallacy everyone seems to ignore: Let's say there was voter fraud. Where is the evidence the Democrats committed it as opposed to the Republicans?

The Democrats have won many elections here with better candidates and better GOTV/voter reg operations; these are objective facts. So who in this state would have the motivation to cheat, the party run by pros or the party run by a guy found to have violated state ethics laws? And if the Democrats cheated at the top of the ticket, why did they lose critical legislative contests where, presumably, it would have been easier to change outcomes?

I am bothered by the arrogant Left and the clueless socialists who have captured the party apparatus here and have driven too much policy in DC. But I am much more disturbed by a Republican Party captured by a cult of personality and fealty to a solipsist who tried and continues to try to unravel the fabric of this country.

I have never been a believer in the idea that fairness is achieved through a “he said, she said” style of journalism and never has it seemed more outdated and not up to the moment. All members of the media need to ask difficult questions and privilege facts and context over bothsidesism.

Ask elected officials and candidates if they believe the election was stolen. If they say yes, ask them for their evidence. If their evidence doesn’t exist, say so. And don’t stop there.

Ask them what "woke" means. Ask them what critical race theory is and ask them to provide examples of specific objectionable curriculum in our schools. I could go on, but the main point is to not let them pander and dissemble without calling them out. Yes, on...both sides.

Are there any left?